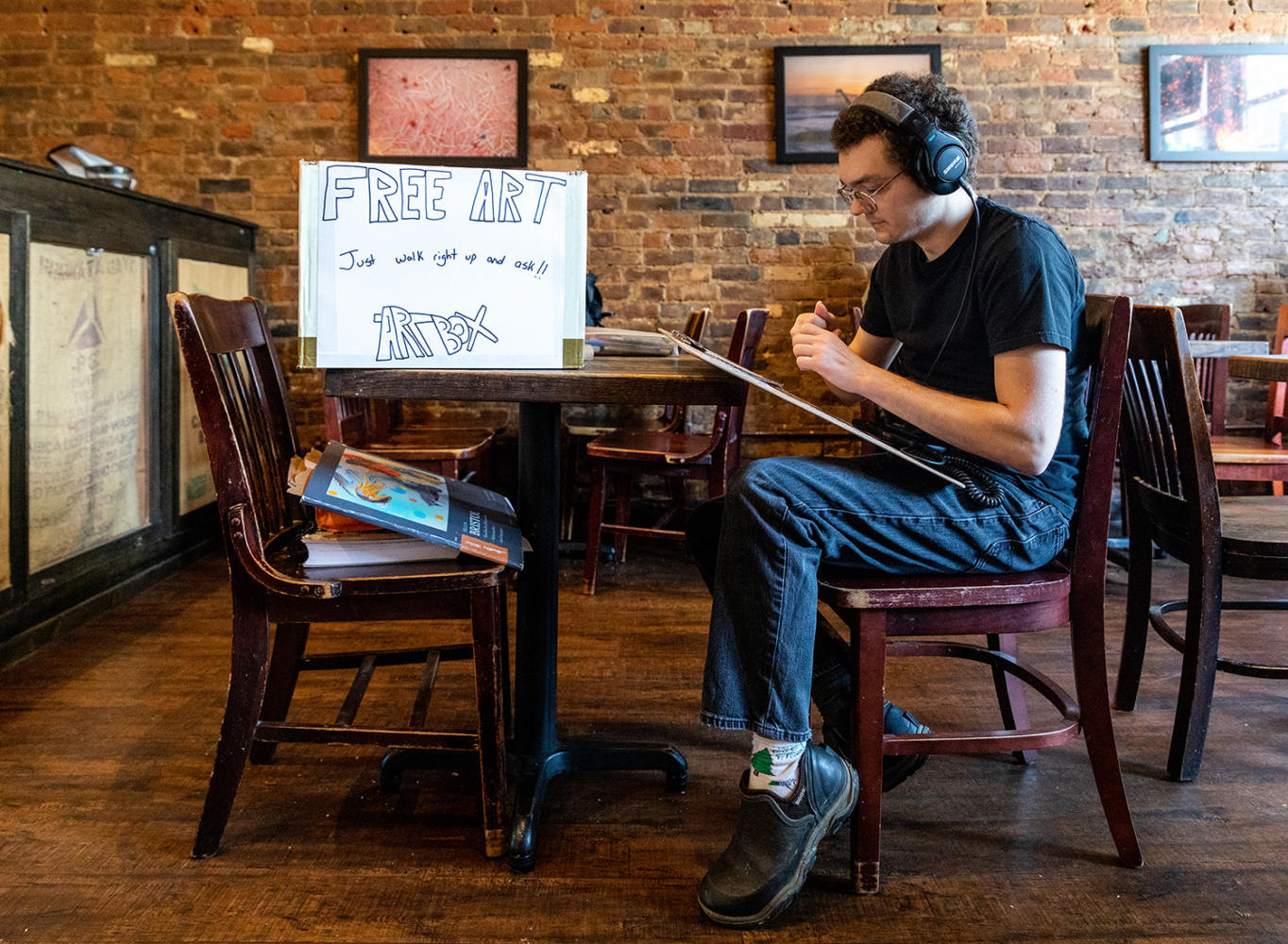 At Spencer’s Coffee shop, located at Fountain Square, an artist spends his free time practicing his art and handing out free clippings of his artwork. He often sets a sign up that reads, “Free Art,” which catches the eye of many customers, as well as Spencer’s workers who happily take his free clippings.

This artist, Asa “HoneyBoy” Jessup from Greenville, said he mainly gives out free drawings but also paints and dabbles in photography.

Jessup said that he used to keep his art for his own enjoyment but that changed when he saw how giving people his art made people happy.

“Giving people my art is a good way for me to spread love, so I like to give my art away for free,” he said.

Jessup, a former art major and philosophy minor at Murray State University, said he doesn’t like how art is taught in academic settings. He said people learn how to judge others’ art as well as their own.

“Schools often give you a formula in your head of what you think art should be like. I spent all of my time outside of college deconstructing that formula,” Jessup said. “I believe there isn’t any incorrect or correct way to do art.”

Jessup said as a student he became captivated by philosophy and constantly wanted to learn more.

Renne Rhodes, a barista at Spencer’s, said she has received drawings from Jessup that she was impressed with.

“He has given me a drawing of a dog that says, ‘Every Doggy Day,’” she said, “I have that drawing taped up, and it makes me happy to see it every day.”

Rhodes said she is also a part-time artist who considers herself a good friend of Jessup. She said he is very talkative, personable and has a strong passion for art.

Leo Rowley, Rhodes’ coworker at Spencer’s, says he often sees Jessup drawing at the coffee bar while he works.

“He never runs out of things to say,” Rowley said. “He has a certain air of confidence I admire and aspire to have.”

Rowley said that the particular art style Jessup has is individualistic, which is a good quality to have as an artist.

Jessup said that Keith Haring, an LGBTQ artist, was one of his biggest inspirations. He said that Haring was openly gay, and he used his art to benefit the LGBTQ rights movement.

Just like Haring, Jessup said that he expresses issues in his art that he feels are not talked about enough, such as disabilities and mental illnesses.

Jessup said his advice for aspiring artists is to never give up.

“I’m tired of the mysticism in art where people think that art has to be a beautiful scene. Art is what you make it to be,” he said.