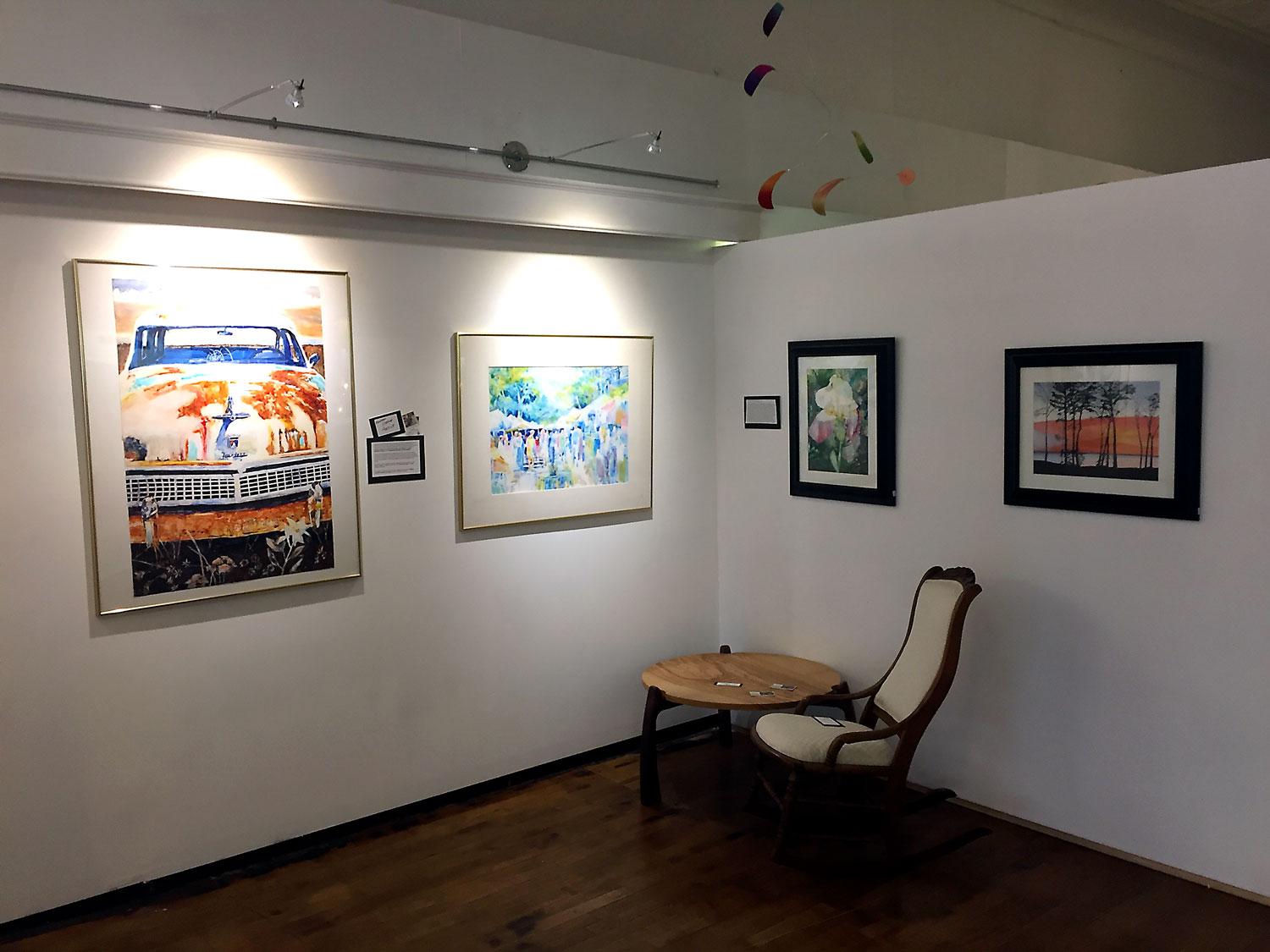 Doing the Hop: A tour of Bowling Green’s art scene

Dozens and dozens of artworks are on display at Love ART and Antiques Gallery in downtown Bowling Green. Watercolor paintings and aluminum maps of Kentucky line the walls. Pottery and hand-crafted jewelry are displayed on repurposed pieces of furniture. A glass mobile hangs from the ceiling.

Store owner Robert Love made many of these pieces himself, and he’s ready for a flood of up to 150 people to see them.

Five Fridays a year, members of the local arts community come together for Bowling Green’s Gallery Hop, a self-guided tour of the city’s local arts businesses. Organizers scheduled the fifth and final Gallery Hop of 2016 for Friday, Dec. 2 from 5-9 p.m.

Like many other artists and gallery owners in Bowling Green, Love is ready to finish this year’s series strong.

What is the Gallery Hop?

Gallery Hop has been part of Bowling Green’s art scene since 2008. During the event, which centers mainly on downtown art galleries and businesses, attendees are given a map of locations and encouraged to explore them in whatever order and speed they would like.

Most of the 16 locations are in walking distance of one another, although a few, such as the Downing Museum on Morgantown Road and the Ellis Walker Gallery in Thoroughbred Square, require driving.

Gallery Hop is not the only event of its kind in the state or Bowling Green. Over 6,500 Kentuckians were employed in visual arts in 2013, according to the Kentucky Arts Council. This means there are lots of opportunities for artists to gather and host collaborative events.

Metropolitan areas such as Louisville and Lexington and smaller towns such as Madisonville have their own versions of Gallery Hop. Bowling Green also hosts the World’s Greatest Studio Tour, a similarly-formatted, self-guided tour of both art galleries and artists’ private studio. It occurs once per year.

However, Bowling Green Gallery Hop is distinct in two ways: it is held by gallery owners, not singular artists, and it overwhelmingly features artists from the region and the state. This allows the work of multiple Kentucky artists to be featured in the same galleries, and each gallery differs in the types of artists and mediums it exhibits.

A myriad of artists and art forms can be found in the businesses along Gallery Hop. Watercolor and oil paintings hang alongside woodcarvings, photography and glassworks. Some shops even feature items such as hand-poured candles and custom t-shirts during the event.

According to the Kentucky Arts Council, employment in the arts in Kentucky has grown in recent years. The state saw a 5.7 percent growth in employment in the visual arts from 2004 to 2013, compared to a 1.4 percent growth nationally during that time. Many locations along the Hop opened during this period, including the Pushin Building Artists’ Studios in 2004 and Ingen Art Gallery in 2013. Several others have opened within the past two years.

Love’s shop features several different types of his own work, as well as the work of other artists he knows personally. After graduating from WKU in the 1980s, Love moved to Lexington, where he became a high school art teacher, but he never stopped creating works of his own.

Now retired, Love and his wife Ronna, also a retired art teacher, decided to move back to Bowling Green earlier this year. In the process of moving, they discovered a business space for rent on Park Row.

“I thought, ‘what would be crazy?’’ Love said, recalling the moment. “Opening an art gallery.”

Love’s preferred medium has long been recycled aluminum cans, which he crafts into forms such as cars, maps and portraits of celebrities. However, his gallery also features several other types of art, including paintings and works of clay, leather and Styrofoam.

“I wanted to have a place for my artwork,” Love said. “And since I’m friends with artists and some of them might also be retired art teachers, I knew that I would be able to find some work that wasn’t just mine because that wasn’t going to work. I needed to have some variety.”

Courtney Davis, current president of Gallery Hop and owner of Ingen Art Gallery & Studio on East 10th Street, graduated from WKU in 2012 with a degree in mass communications after switching out of an art major.

After months of searching for a job with no luck, she and her boyfriend, Chris Beckley, decided to try opening a studio.

In addition to the gallery, where exhibits tend to be based on the dates of Gallery Hop, Davis and Beckley offer painting classes for those interested in improving their skills. At Gallery Hop events, Davis features her own work, as well as the work of other artists she knows and those in her classes.

“What’s really cool about our space is we work with a lot of different artists,” Davis said. “So when we work in this space – and even for our last show, I mean, we had 10 plus artists at a time – you have such a unique variety of different kinds of items. I mean, we’ve had everything from custom vinyl toys, paintings, drawings, prints, custom jewelry, 3D art pieces, sculptures, and it changes every time we have a show.”

Another gallery, the A-Frame, which has been open since 2015, contains three parts: a store in the front of the space, a bar with a gallery and music area in the middle and a print shop located in the back.

Co-owner Marissa Butler said it has taken some time for the business to evolve into what it is today. Alex Smith, another co-owner of the business and artist himself, is in charge of the print shop, Butler said it only made sense that they got involved in Gallery Hop.

“It’s a place for artistic, creative, more offbeat people to hang out and showcase some different art,” Butler said.

During Gallery Hop events, A-Frame also has food, drinks, a selection of craft beers and a live acoustic performance. As all four owners of the business are parents of young children themselves, Butler said that they also enjoy making their space more open to families during the event.

In addition to more traditional art galleries, other stops on the Gallery Hop include Candle Makers on the Square, The Pots Place Co-Op, the Presbyterian Church on State Street and the Kentucky Museum on WKU’s campus, all of which will feature art and culture exhibits from artists around the state.

There is no formal system for calculating attendance at Gallery Hop, but Davis estimated the event usually sees anywhere from 100-150 guests. Many of those attendees are Bowling Green residents, occasionally including WKU students. However, Lynn O’Keefe, owner of Gallery 916 on State Street and a Gallery Hop member since 2008, believes the event has a more widespread impact than one might expect.

“What we see happening, and the reason we do it year after year, is that there are a large number of people who move into Bowling Green,” O’Keefe said. She later added: “What the Gallery Hop has done is let us realize that there are people who recently moved here, that to them this is a great way to see the community, walk around, meet other people.”

According to the Kentucky Arts Council, 20 percent of visual artists will sell 40 percent or more of their work out of state. O’Keefe believes that her gallery’s involvement in the Hop has helped her artists find this more widespread audience.

“Getting the word out that these are quality pieces and quality artists and having their work, that’s actually kind of what I do,” she said. “I aspire to getting my work out of this area.”

Love has certainly seen visitors from all over since he opened his doors in June. He keeps a map behind his counter that marks where those who enter his shop are from, with pins on places like Chicago, Vermont, and California – although he clarified that not everyone who marks his map has purchased artwork – and anyone who comes in is welcome to add their hometown to the map.

Telia Butler, public relations director for the Bowling Green Area Convention & Visitors Bureau, said that the Gallery Hop aids in a larger push to make the downtown area more arts-friendly, which should in turn draws more visitors to the area.

The city has added several arts-centered activities and venues in recent years, including the Southern Kentucky Performing Arts Center and The Marketplace downtown. However, Butler believes that more successful arts events and businesses can only benefit the city when it comes to tourism.

“The more arts and entertainment we have, the more appealing we’re going to be,” she said.