From the Magazine: Flesh memories

Once — I must have been 7 or 8 years old — I dreamt that my toes were being run over by a lawn mower. I remember lying flat in the cool green grass on a spring day. I wore my dress with the tiny purple flowers. My toes wriggled freely with the breeze. Then, suddenly, there was a terrible pain, a shredding and ripping of flesh and bone, beginning at my toes and moving up my legs. I watched with panic as pieces of me cycled through the mower and sprayed onto the rest of the lawn. But as is true of most dreams, there was a veil of subconscious censorship, which made this scene bloodless and turned me into a mixture of grass and soil. It was as if my flesh was being recycled back onto the green lawn as I was begging for the pain to end. I woke with a fright to the sun through my blinds. Looking down at my toes to make sure they were still there, I realized I had fallen asleep with my little pink dance tights and leotard still on from the day before. My physical pain had manifested itself into a dream.

At times, I still remember that dream when I slip on the pink nylon encasements which will tightly contain my body for the majority of the day. Twisting my hair into a cinnamon bun on top of my head, I laugh at my 7-year-old self — the young child who had only so far endured three hair-pinning, mirror-staring, tight-wearing years, yet she already longed for freedom from the constriction of her world. Freedom from her flesh. 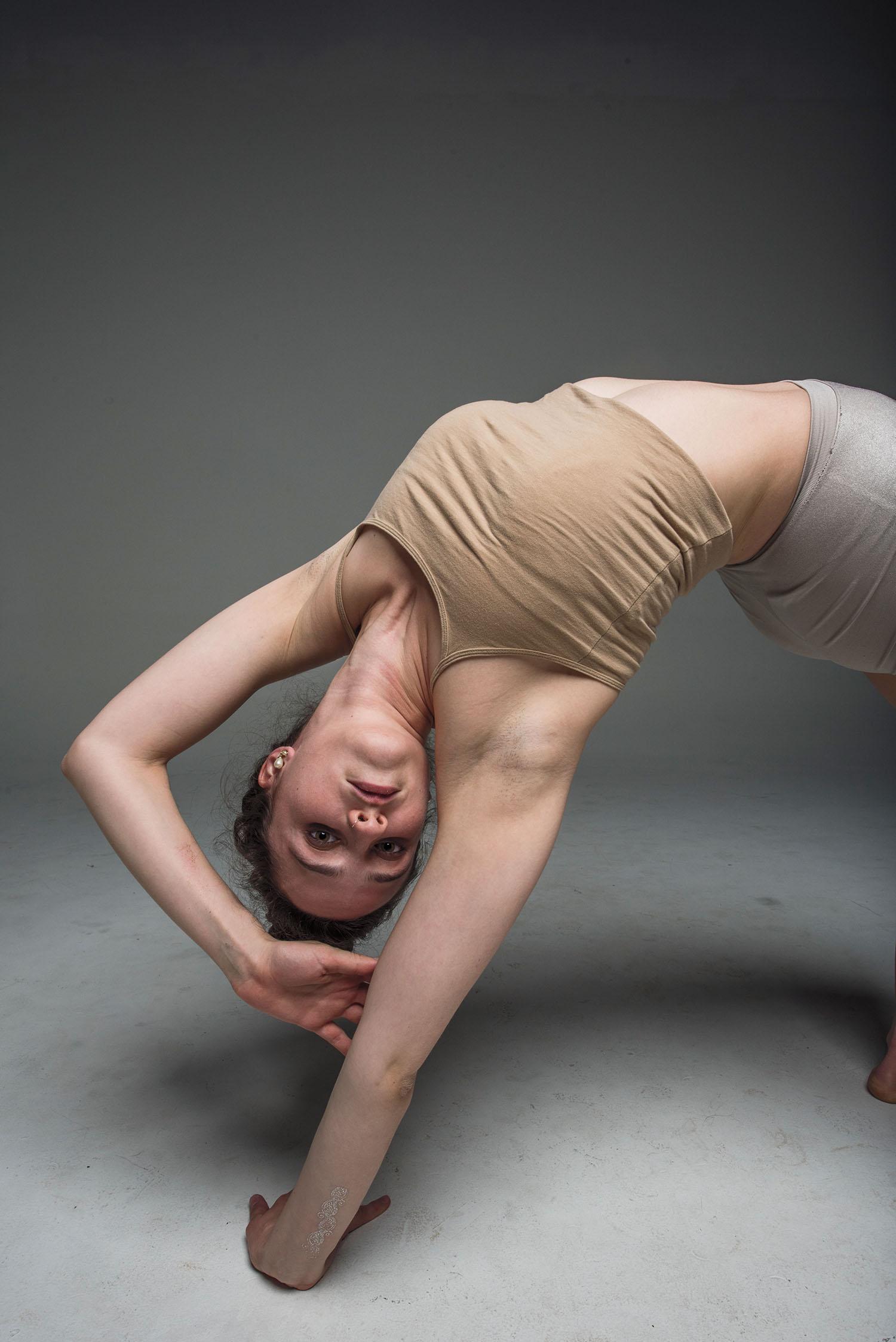 A dichotomy exists between flesh and body, which has been noted for thousands of years in literature, theology and dance theory. The body is often seen in each of these contexts as the vessel through which human life occurs. In literature, the body carries out the plot points. In some religions, the body is a temple where worship can be performed daily. In dance, the body moves through each choreographed step. The body is the container for the flesh. The flesh holds the blood even after Lady Macbeth has washed her hands. The flesh of the Bible is equal to sin. The flesh is what has made the art of dance resonate with viewers for centuries. While our bodies are cleansed with each new day, our flesh is scarred with the brands of our past. Our flesh reveals what the made-up, tattooed, clothed body hides. Our flesh tells our story. My flesh is unable to contain its speech. 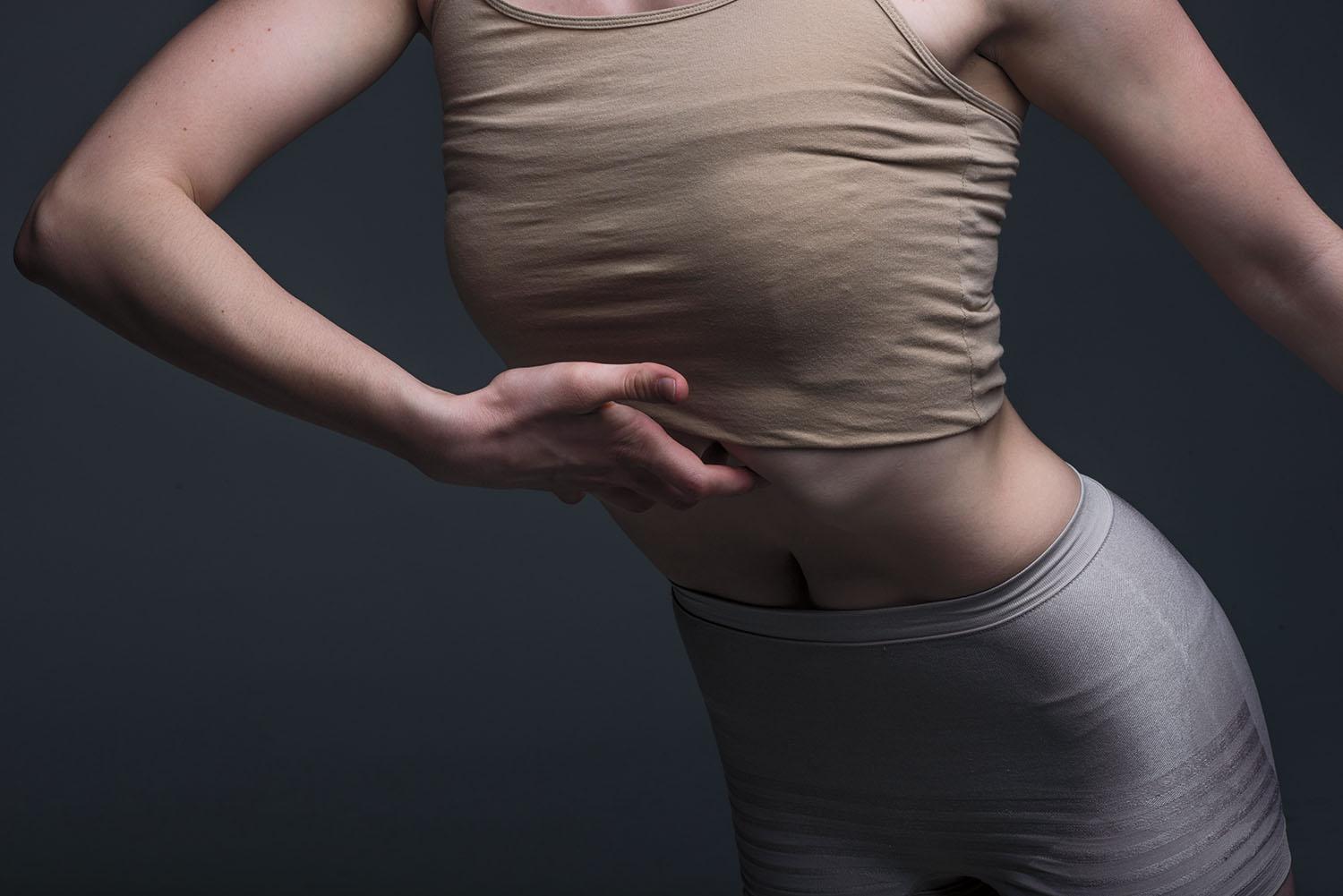 A taped X with our names marked the spot for each of us to sit “crisscross applesauce.” I sat next to Andrew M. and in front of Zachary R. I didn’t know it at the time, but it was going to be a long year. Every time we got on the carpet, Andrew and Zachary would begin their games. Always poking or playing with my hair. They would tease me through the entirety of story time, but I knew what to do. I had already been briefed on how to deal with annoying boys: “ignore them; they probably just think you’re cute.”

Andrew M. was in my class again. It was book fair week. Paper chains with the names of students and the books they had read that week lined the ceilings. Standing in line outside the bathrooms, we were having contests to see who could jump high enough to reach the chains. Ms. Spence decided to put an end to the madness, yelling, “The next person who touches the chains will get a tally.” Andrew dared me to jump when she wasn’t looking. I did it. I went home with a sad face in my agenda that day.

We sat in a sunny restaurant on a Sunday. It was an all-you-can-eat buffet. My best friend, Alys, came with us after church. We sat with my grandparents, parents, siblings and the one-third of my aunts, uncles and cousins who went to my church. There were probably 15 of us. There were always at least 15 of us. Alys, my cousins and I were filling our plates to the brim with mashed potatoes and fried okra. Parents sat at one end, the kids sat at the other, and I bridged the gap as the eldest cousin. I was wearing my favorite dress — the one with the pink, black and blue stripes and a little ruffle of tulle at the bottom. Shoveling a fork of fried chicken into my mouth, I locked eyes with my grandmother. “Pretty soon you’re going to have to hand that dress over to Alys if you keep up those eating habits. You’ll bust right out if it.” I saved my tears for after dessert. 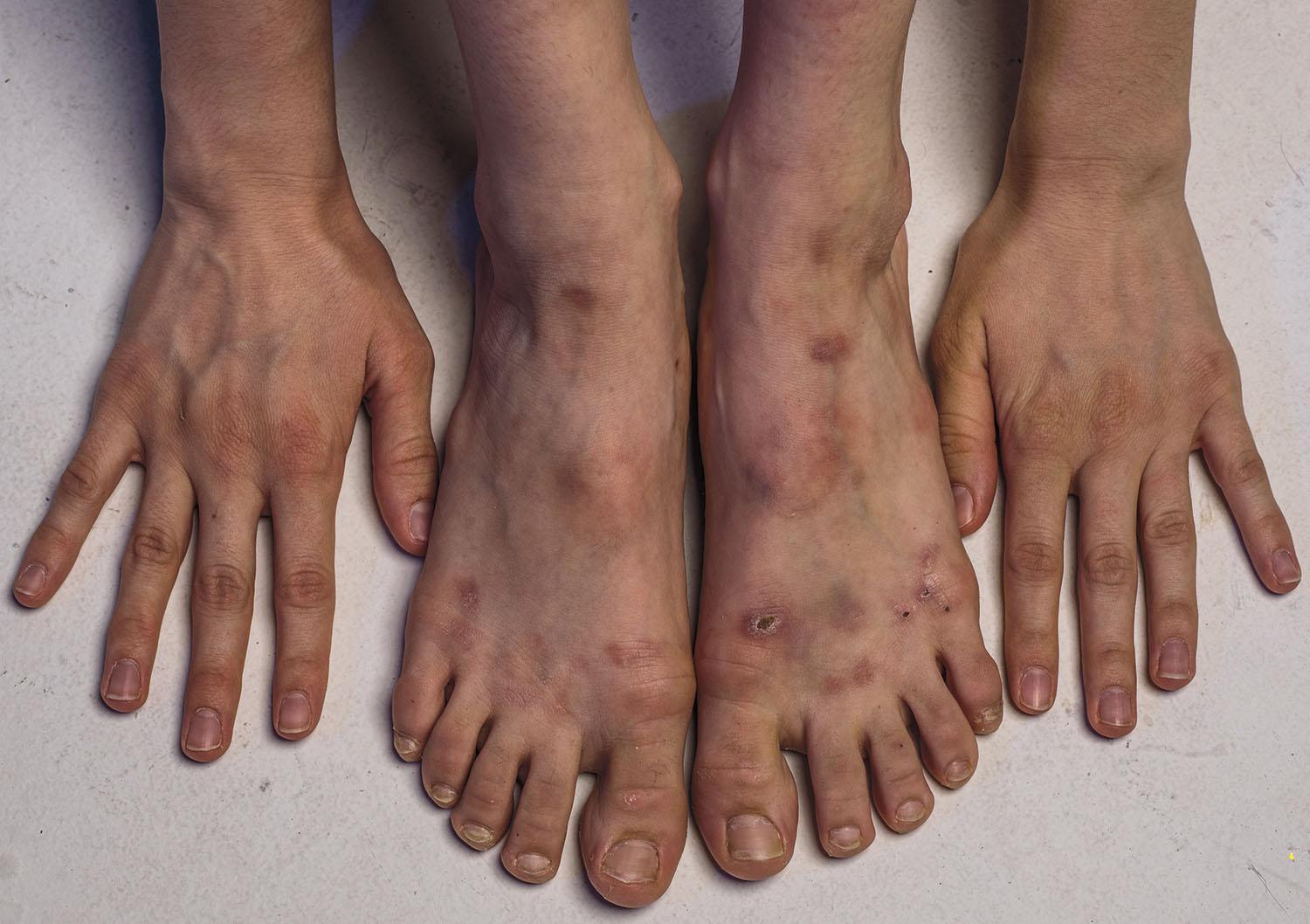 At Governor’s School for the Arts, I was the only girl who had to take ballet class from a teacher from my home studio. I quietly warned everyone how evil he was but also tried to remain optimistic for the sake of maintaining peace. The day approached when it was his turn to teach. I cried in my room alone in anticipation of the moment when we would be in the studio together again. The day finally came, and Mr. Christopher walked into the room. I made it through the first exercise unscathed. He asked me to demonstrate the next one but told me to stop halfway through. My legs weren’t straight enough. “It’s because you have such a fat ass,” he exclaimed. Like I’d watched many of the older girls do, I laughed and nodded as if I agreed. I took a deep breath and continued on with his class … for the next three years.

I was kind of a bro in show choir, meaning I hated most of the girls and joked about them with the guys. One day I must have shown weakness because the guys turned on me. They started making fun of my gangly limbs and lack of curves in my hip region. They called me “Flapjack” for the rest of the semester. I called myself that as well.

We were asleep on the floor. Everyone was next to everyone, but also next to no one. I think there was a carpet. I think there were curtains. I know there was the sun. It woke me. And so did a hand. It was an unwanted, earth-shattering hand. I played dead as it caressed me, as it slipped into my sweater… or was it a shirt? I don’t remember; I was asleep. But I wasn’t asleep. The hand continued slithering down through fabric and skin. One thousand slow seconds later, I uttered a sleep-like groan and slowly turned myself toward the ground. I searched the manual in my mind for my next move. I skimmed over the chapters that had been written there through time.

There were some faint lines that read, “say no,” “be strong,” “speak up,” but they seemed to blur to invisibility as I read them. Those lines weren’t in my flesh. Frantically, I searched for the instruction on how to get myself out before the hand returned. I lie face down on the carpet … or hardwood … or whatever it was, hating myself for what had just occurred. As tears came to my eyes, I referred to Chapter 3, fearing that the hand might hear me cry and discover my awakeness. I lie there until the early morning hush resumed. No one else stirred.

I ran to my car, saying nothing to anyone — for years. I thought of the lawnmower again that night. I’m not sure it was a dream, more of a wish. A wish that I would be completely consumed by its powers to recycle my flesh back into the earth where it began, pure and free. 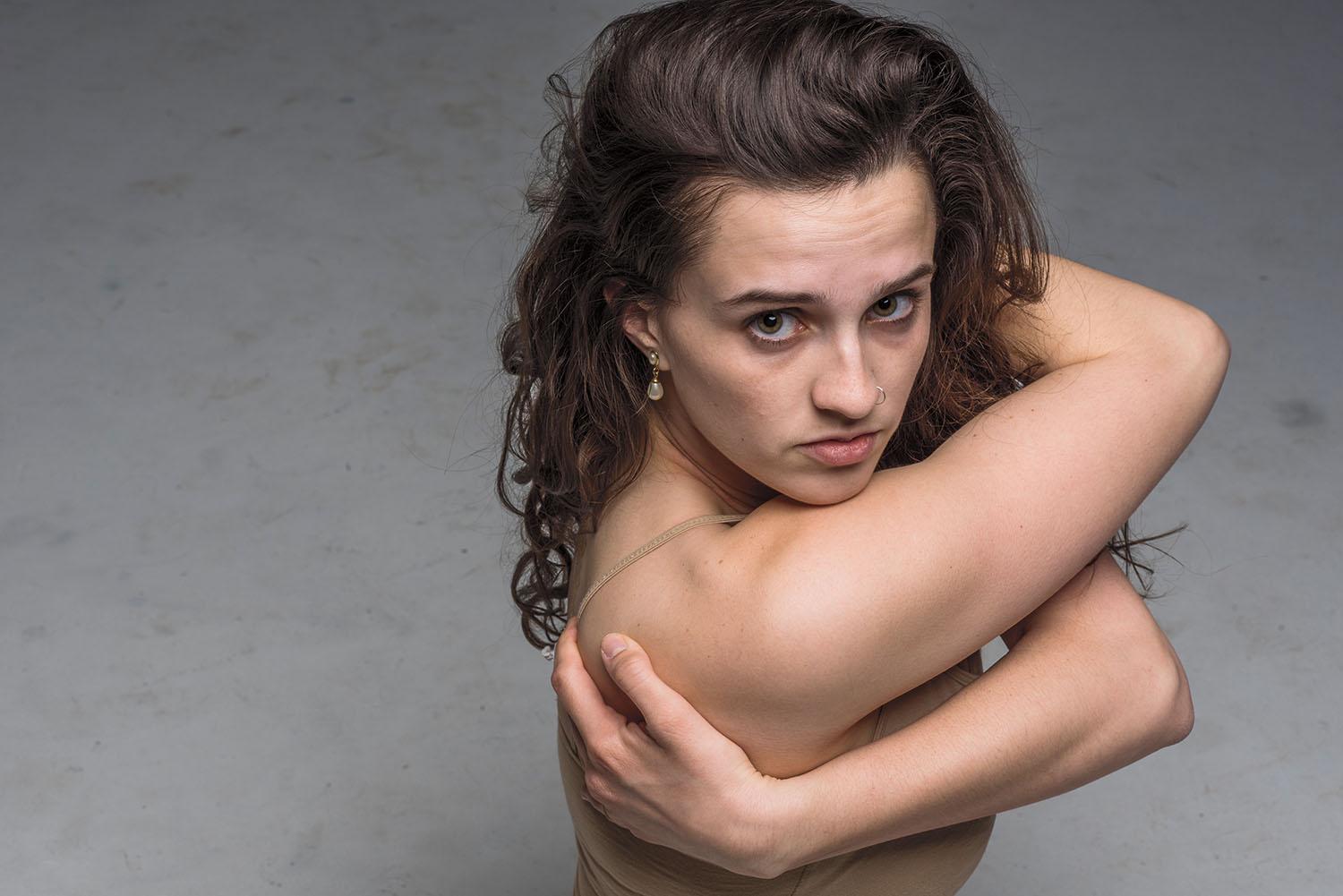 My body has been poked and prodded from its earliest days. It has been bruised and scraped and broken. I have put it on display in front of mirrors and audiences and harsh critics or abusers almost every single day for the last 17 years. My body has been molded and shaped into an inconceivable number of patterns and positions. Now, at 21, my body is already beginning to fail me. As I stiffly rise out of bed each morning with the crackling sounds following each hunched step, I look in the mirror and realize that one day all I’ll have is the flesh I so despised when I did not know how to appreciate its worth.