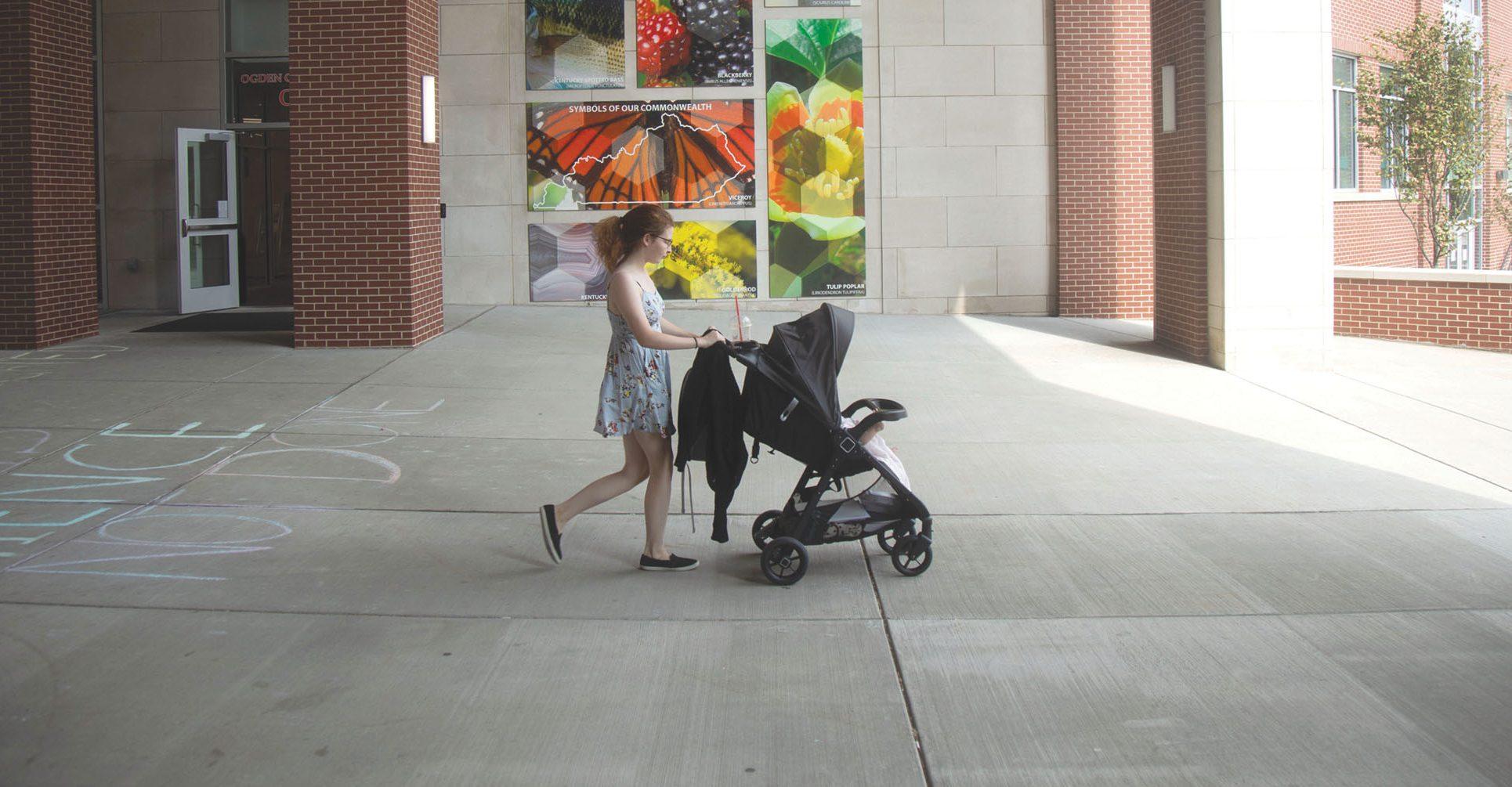 Every weekday, Savannah Ranney commutes from Scottsville and walks from the Park Street Lot to campus while pushing a stroller, along with carrying her baby bag and her own school supplies. “I appreciate being able to walk up the stairs when I don’t have her because WKU is not handicap accessible, let me tell you,” Ranney said. (Photo by August Gravatte)

From the magazine: Mother load

At 19 years old, Scottsville senior Savannah Ranney was entering the second half of her college career and her first trimester of pregnancy. She was worried about what was to come with blending her current student life and impending mom life. However, it wasn’t shocking to her that she got pregnant because she didn’t use contraceptives due  to her body’s negative response to birth control, and she didn’t use condoms due to her sensitivity to latex.

“It was bound to happen eventually,” she said.

Ranney commutes to WKU from Scottsville daily with her infant daughter, Persephone. She has never doubted attending college, despite being only the second person in her family to attend after her mother. She is double-majoring in psychological sciences and religious studies despite her desire to get away from her religious upbringing in Scottsville. When she began to question the beliefs of her community, she decided to study religion to uphold her religious reasoning.

Putting her education on hold to take on the role of a full-time mom was never an option.

“Education has always been my number-one priority,” Ranney said.

Just a week after April 1, 2019, the day her daughter was born, Ranney was back in class with Persephone dressed in her “Fresh Outta Mommy” onesie in a car seat at Ranney’s feet.

Taking a baby to class isn’t without its hardships. There are times when Ranney has to step out of class to change a dirty diaper or quiet Persephone’s echoing babbles. Also, while walking up the Hill may be strenuous for some students, walking up the Hill with a stroller containing an infant, a diaper bag and a book bag is exasperating.

“Walking up the Hill with wheels of any kind is impossible,” Ranney said.

However, Ranney said that many of her professors are extremely supportive toward both of them and that they enjoy having Persephone in class almost daily.

When Persephone is not in class with Ranney, she stays at Ranney and Persephone’s home, where they live with Persephone’s father and grandfather. Despite the exhaustion, sleepless nights and instances of her baby eating her homework, she never forgets to take advantage of the better times.

“There’s the moments where they’re smiling and happy and they just look at you with all the love in the world and you’re like, all right, I guess it’s fucking worth it,” she said.

Ranney is on track to graduate at the end of this semester, being a part of the 2% of teen mothers in America who finish college before the age of 30, according to the National Conference of State Legislatures.

Another person in that 2% is Catherine Miller, a Russellville junior, who had her sights set on her volleyball career at Kentucky Wesleyan College in the fall semester of 2017 until she discovered she was pregnant at 18. She decided to move to Bowling Green to attend WKU where she could be closer to family to help her raise her daughter, Aeron, who is now 1 year old. Miller, now 20, knew that she would still continue her education for the sake of her daughter.

“I knew I needed to finish my degree to give both of us a better lifestyle,” she said.

Miller remembers seeing other young pregnant students at Kentucky Wesleyan and questioning how they were handling pregnancy and school at once. She never expected to become pregnant herself and said she was scared when she found out.

“I didn’t have the answers to anything,” she said.

Her first weeks at WKU were difficult. She was juggling two jobs, going to classes, completing assignments and dealing with the stress of knowing she was pregnant. After Aeron was born, Miller enrolled her at a local daycare, where Miller began to work after leaving her previous jobs to spend more time with her daughter.

“Time management has been a huge thing for me, and I’m still not the best at it,” she said.

Weighing out her time at home doing work with time spent bonding with her daughter has been a challenge.

“I feel like when I’m not at work or not in class, I need to be spending time with her because she’s been at daycare all day long, and it’s hard to find that balance of doing homework versus watching her grow up because I don’t want to miss that time,” Miller said.

Because her brother and sister also live in Bowling Green, Miller can depend on them to help out when a few extra hours of sleep or studying are needed. Despite the lost sleep and study time, Miller said she would never take back being a mom.

Miller’s experience with informing professors of her daughter has not gone as well as Ranney’s. Some professors, she said, are understanding of the days when she is not able to be in class because of her duties as a mother. She also said that other professors have seen this as a cover-up for not completing her student responsibilities. She said she rarely brings up her daughter when talking to professors to avoid using motherhood as an excuse. Despite this, she said that a professor in the past has insinuated that Miller was lying about having a child at all when she mentioned her daughter affecting an assignment. 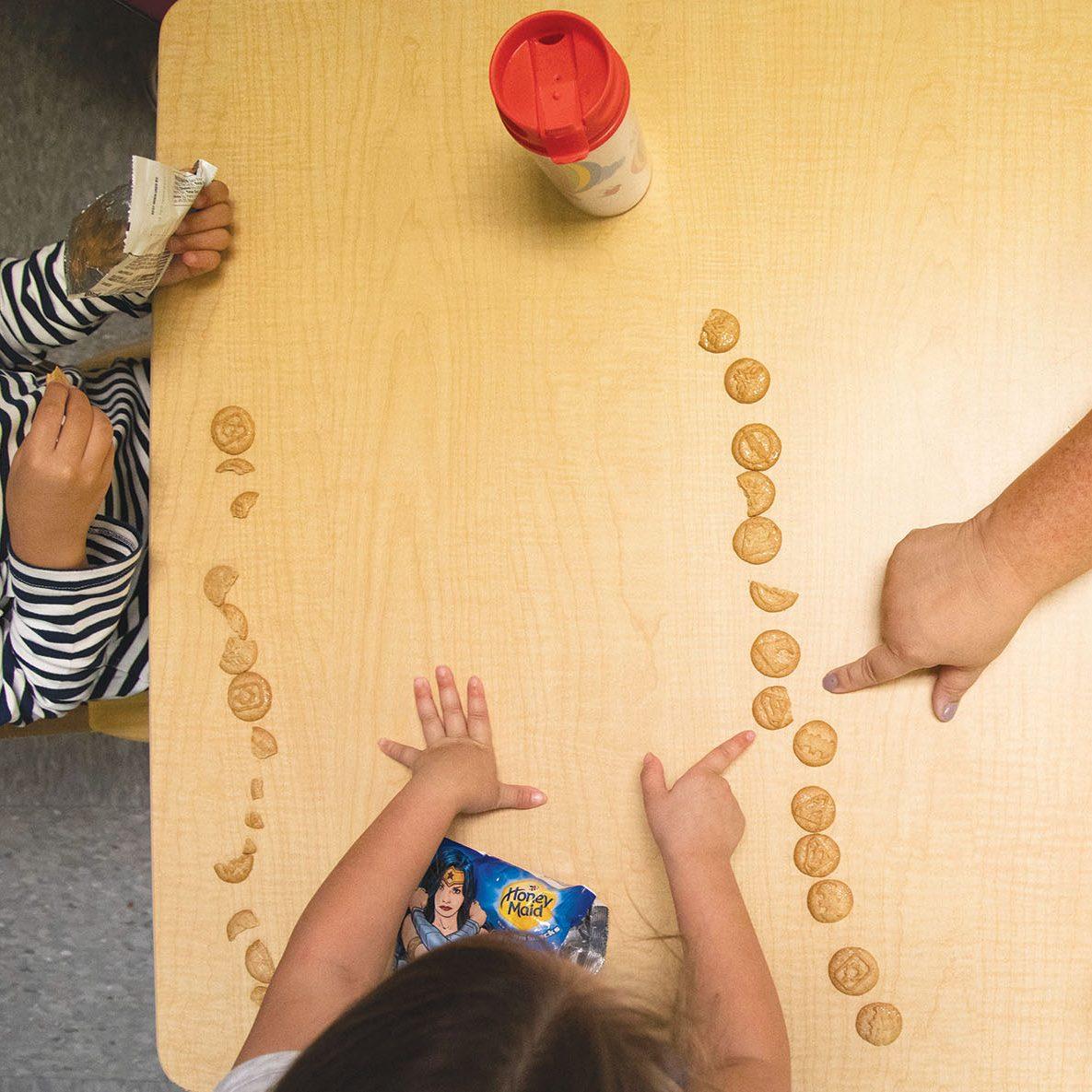 Naftel organizes cookies by shape during snack time. During “centers” time, children have the opportunity to split up and learn independently. (Photo by Reed Mattison 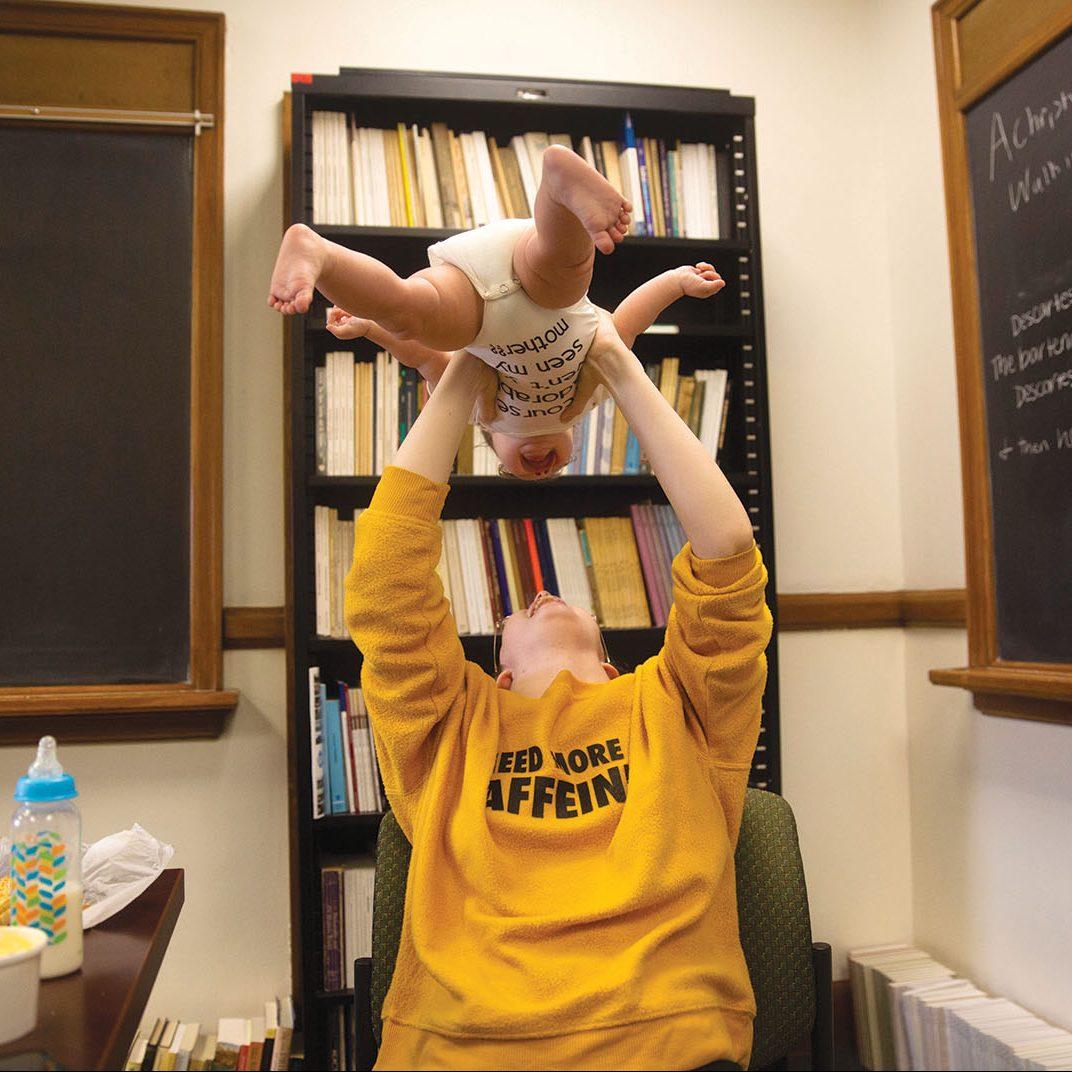 A few moments after Persephone bumped her head, Ranney comforts her with playful laughter in the religious studies lounge on the third floor of Cherry Hall. Ranney said that smiling when comforting an upset baby helps calm them down and teaches them they’ll be OK even when a situation is scary. (Photo by August Gravatte)

Like Ranney, 40-year-old Bowling Green native Tonya Naftel also sees her daughter in class. However, Naftel’s daughter is a 19-year-old registered student at WKU. Naftel has been an on-and-off student at WKU since 2002. Three children later, she is back to finish her degree in early childhood education to help with her job as a preschool teacher at The Foundry, a nonprofit Christian community center in Bowling Green. She said that the struggles she faced in childhood allow her to help the children in her class who are in similar situations.

Naftel was married at 16 and a mom of three by 20. She grew up in a trailer park in Bowling Green with her parents and moved to Richardsville when she married her husband, where she still lives today. It was not until she was 23, when one of her children’s teachers encouraged her to go back to school, that education became a priority. She was more concerned with having electricity in her family’s trailer than her schooling.

“Education was not important in our house growing up,” she said.

After getting her GED at 19, Naftel began taking 15 credit hours per week at WKU in 2002. At that time she had three children under the age of 8, making it difficult to be able to commute to campus from Richardsville during the day, come home to do laundry and cook dinner at night, then stay up until 3 a.m. to write a paper and begin the next day at 7 a.m. to repeat the process. After three semesters of this cycle, she decided to take a break and focus on taking care of her husband and children.

“Being a mom was my number one job, so I had to put school and myself on the back burner,” she said.

As a mother of three self-sufficient adults who are 19, 21 and 23, she said she appreciates the freedom that comes with being able to attend classes without having to care for young children like she did two decades ago. She continues to see her daughter on campus and even had class with her daughter in her first semester back at WKU. Naftel said she appreciates the fact that she had her children so young because of whom it has made her today.

“I feel like I grew up with my kids because I was so young,” she said.

Naftel is on track to finish her degree in the fall of 2021 and be a part of the 25% of college students who come from low socioeconomic status who will graduate with an undergraduate degree, according to the American Psychological Association. She wants to continue working at The Foundry as a preschool teacher.

She drives children home when parents are unable to be at the center on time, does home visits with the children to be able to understand the child more in-depth and said she makes it her personal job to ensure every child feels worthy as a person and a student.

Ranney, Miller and Naftel all mention that despite the difficult times, it will always be worth it.