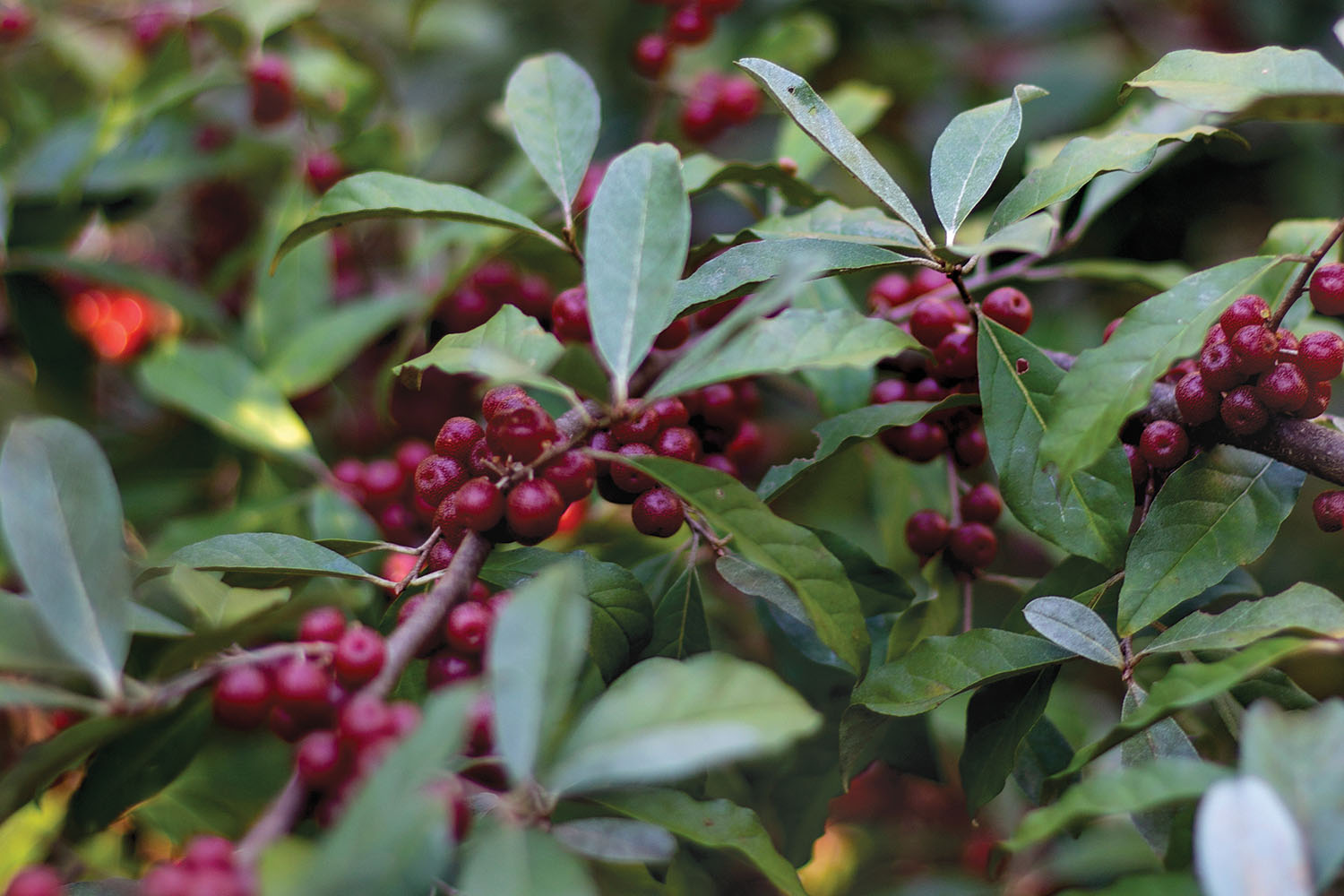 From the magazine: Nature’s apothecary

The birds chirped in the oaks above. The damp leaves crunched on the earth below.

An amateur forager was on a mission, traipsing through the woods in search of the elusive ginseng root. He had ripped out an image of the medicinal beauty from a plant identification book and was comparing the wrinkled page to everything he saw.

So absorbed by his avid search, he ran straight into a tree.

“I turned around, and it was like the sun opened up,” James said.

The light shone down on a seemingly insignificant plant with distinctive red berries, a plant that matched the exact image he was holding in his hand.

He had found his first ginseng.

Foraging, scavenging and making a meal out of Mother Nature began for James as it begins for many foragers: a childhood love for outdoor adventures. A knowledge of plants, folk stories and hiking etiquette, supplemented by avid reading, was initially passed down to James by his grandparents.

His first introduction to foraging was through a scavenger hunt devised by his grandmother to keep him and his cousins from tearing up the wilderness on their four-wheelers. With age, James grew more interested in foraging.

“As I got older, I circled back to my grandfather,” James said, “I found out more about the specific names, uses, and then he would share more of the folk uses for things.”

Willie Huston, who owns a Warren County farm, kicked off his love story with Mother Nature as a child in his hometown of Garden Valley, Idaho. At ten years old, he was picking morel mushrooms.

“We would pick them, me and my brother, and we would sell them by the bucket-full,” Huston said.

Barren County native Wes Berry, an English professor at WKU and regular mushroom hunter, was also introduced to foraging as a child; his parents collaborated on cooking meals with foraged ingredients.

“I was lucky enough to spend most of my impressionable youth in the country,” Berry said. “It was really bucolic.”

Berry recognized his “Little House on the Prairie” upbringing as responsible for his life-long love for nature. He reminisced on memories of finding over 200 morel mushrooms with his father and cracking open black walnuts for his mother to make ice cream and brownies.

“My family used to fight over the white button mushrooms that mom would buy at the supermarket,” Berry said. “And then when I ate the morels, I thought, ‘Oh wow, a whole new level of earthy yumminess’.”

40 years later, Berry revels in the constant learning that comes from chasing after elusive fungi. He said that every walk in the woods is a step toward learning more about the art of identification.

Berry cited a time in fall 2020 when he and his wife were hiking, and he saw a “big clump of beauties.”

Using his pocketknife to safely secure the fungi, he brought them home and did some research to confirm his suspicion: maitake mushrooms.

Berry emphasized the opportune nature of Bowling Green’s geographic location; Eastern Kentucky sits on the heels of one of the oldest mountain ranges, the Appalachians.

“We just have some of the richest forest land in the world that gives birth to all this foraging potential,” Berry said.

James often forages for medicinal plants in nature’s own apothecary: the creek systems. He regularly supplements his diet with ghost plant, bloodroot, goldenseal and American ginseng.

James said ginseng, because of its commercial value, is highly sought after and therefore protected under federal law. He said the gnarled, bitter cure-all is well known in East Asian medicines and is recognized to improve blood circulation, increase vitality and benefit overall health.

James warned that recognizing ginseng and its habitat as a commodity, however, has dramatically decreased its wild population – making it that much more precious.

The foragers held a common belief that there is a certain responsibility to the land and the plants they benefit from.

According to Martin Stone, a WKU professor in the department of agriculture and food science, the director of the Baker Arboretum and a farmer, a forager runs the risk of significantly harming a plant’s future through extraction, should the flora be endangered.

For Stone, stewardship is common sense.

“It’s just, it’s just simply being a good human, not to just strip everything out,” Stone said.

James similarly sees a balance between economy and ecology. He has built a habit of aiding the preservation of ginseng. By planting their red berries, he actively repopulates them in creek environments. He said a forager must be intentional in “not overusing, not overharvesting” and understanding the plant as a part of an ecosystem.

Stone emphasized the individualistic and flexible nature of a foraging pastime.

“I think of just taking a walk in nature,” Stone said. “And just knowing your plants and … being able to recognize what family a plant is in.”

For Stone, foraging could be collecting raw materials for an art project, finding interesting pinecones, sticks and rocks or drying intriguing flowers in between the pages of a novel.

Stone and his wife, who own a Warren County farm, often collect wild plants for flower bouquets to sell along with their produce at the Community Farmers Market. He also said that black walnuts, a popular sight around Bowling Green, are not only edible, but can be used to dye cloth.

According to Huston, his farming practices bring the techniques of farming and foraging together.

His six-year-old farm works with the ecosystem; he mimics natural processes to ethically produce wild native plants such as persimmons, pawpaws and blueberries.

“A lot of the farming I do is forage-based from the foundation,” Huston said.

His own farm was born out of a clump of frozen mid-winter phoenix oyster mushrooms he found on a stump in his backyard.

Huston believes humans have an intrinsically deep relationship with nature – they just have to tap into it. He said connection increases both human health and the health of ecosystems.

“Once you have that relationship, you tend to keep things intact,” Huston said. “We’ve got to have that deeper relationship where you don’t just extract.”

James urged new foragers to “just go out there and start identifying.” He recommended building a mission of finding a prized plant and identifying the unknowns along the way.

“Take a tree guide or a plant book, and then just have your nose in it out in the woods, you know, and look,” James said.