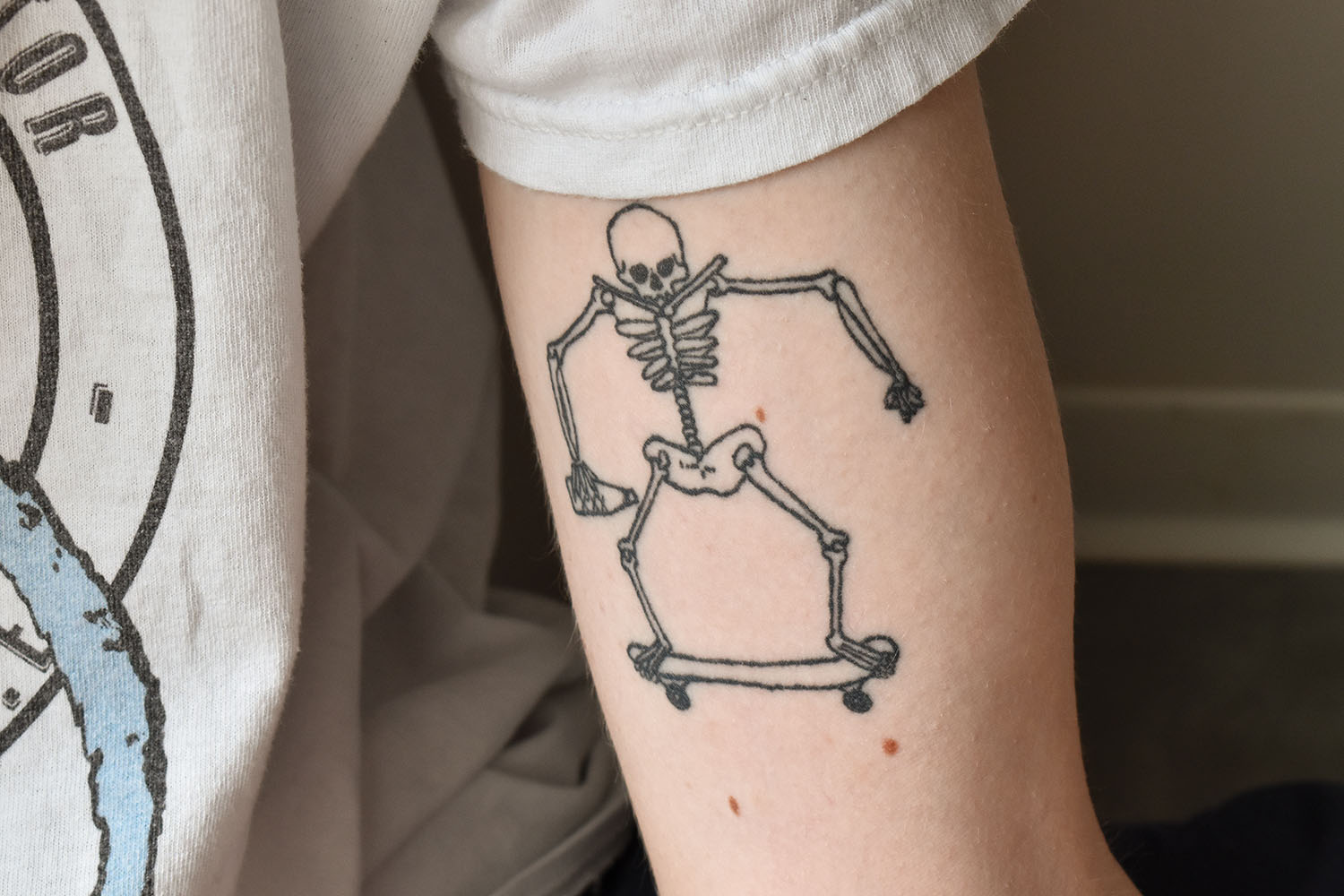 Louisville senior Isaac Teske shows off the tattoo he designed himself. “I draw a lot and sometimes I like one so much that I think, ‘That would be cool to get on my body,’” he said. (Photos by McKenna Fleshman)

From the Magazine: Sketching self

While many WKU students have tattoos, there are a small number who design their own. Often, these students study art or graphic design. They mold their skills in school with their own life experiences to create permanent art on their bodies.

The act of designing one’s own tattoo can be very special for some, as these designs can have a unique, personal meaning.

Senior advertising major Haden Moore from St. Louis said he has two tattoos he designed himself. One is of a semicolon, with a paw replacing part of the punctuation.

Moore said his tattoo has a lot to do with his mental health struggles in high school.

“The reason I did the paw print was to symbolize my dog, who really helped me through those times. I ended up getting it mainly as a memorial to her,” he said. “She passed away last year, and it felt like something nice to do and carry her around with me.”

The other tattoo Moore designed was the title of the Fall Out Boy song, “Thnks fr th Mmrs,” with a heartbeat underlining the quote. Moore said he spent a month perfecting the design of the tattoo.

“The moment I realized I was OK with my mental struggles and was going to come out of it okay, I was listening to that song and just started smiling for the first time in a long time,” Moore said. “It just kind of felt right to get it.”

Moore said he uses Google Images to come up with ideas but uses Adobe Photoshop or Adobe Illustrator to design the tattoos. He said he sends it to the tattoo shop in the form of either a JPEG or PDF, and the tattoo artist loads the design in Procreate, a common software for sketching designs.

“I’m not as artistically gifted, so I don’t really sketch out a lot with my hands, but usually I’ll just start playing around with a bunch of different things and find what works,” Moore said.

Louisville senior Isaac Teske drew his tattoo of a skeleton riding a skateboard on his arm. Teske, a graphic design major, said he drew his first potential tattoo two years ago, and his friend convinced him to get it. She also got the same tattoo on her leg.

Teske said he draws frequently but has lost drawings before. He said he likes the ability to turn one of his drawings into a permanent part of him.

“I have control issues, so I like to control what’s going on my body for the rest of my life,” Teske said.

Rachel Walker is a piercer and tattoo artist at Permanent Paint Tattoo & Fine Art Studios in downtown Bowling Green. She is a WKU alumna who studied studio art and art history and has designed several of her own tattoos. Walker credited her art history experience with helping her expand her knowledge about different art styles and periods.

She said she likes the idea of people designing their own tattoos, as she believes that is what makes people decide to be tattoo artists.

“I just hope that people aren’t intimidated by the industry because I know that it can seem really scary, and I was really scared,” Walker said.

Walker said she started as an apprentice during a time when the tattoo industry was transitioning to newer styles and worried that the industry was too “male dominated.”

Walker has designed several of her own tattoos, including a few on her arms. She said one of her tattoos was inspired by the Egyptian mythological belief that the left side of the body represents masculinity while the right side represents femininity.

“Pharaohs and goddesses were depicted with two left hands to depict the power of feminine energy, so I designed that one for myself and put it on the right side of my body to balance out masculine and feminine energy within myself,” Walker said.

Walker also has the phrase “I will not draw on myself” tattooed on her arm.

“I was punished when I was young because I would draw on myself, and my mom would make me write sentences,” Walker said.

Walker said that she had to neatly write that phrase on loose leaf paper.

“So, I would write that over and over again, I probably wrote it 1,000 times before she gave up,” Walker said.

Walker also designed a tattoo of a branch on her ribs, though she said that was for fun without a meaning behind it.

Teske agreed that many self-drawn tattoos are for fun.

“I don’t really think there’s much of a need to have meaning behind your tattoos,” Teske said. “I mean, you can if you want, for sure, but for me it’s an image that I like that I want on me.”

In a back room of Permanent Paint, Walker has collected a hoard of potential tattoo designs, including a raccoon behind a trash can holding a corn cob.

“I love anything that’s weird. If you come to me wanting something funky, then I’m excited,” Walker said.

“The funniest thing is sometimes people will send you a design that they’ve done on Procreate. It’ll be really thought out and really well done, like maybe they are an art student. And some people will bring me a napkin or a Post-It Note,” Walker said.

Teske said he keeps a sketchbook of drawings, some of which he has considered getting tattooed on himself. He said his classes have helped him develop his skills as an artist and have given him new inspiration.

Moore said that his experience at college has helped him as an artist and has led to him being able to design tattoos.

“It’s really helped me learn to slow down and realize that the first idea isn’t always the best, and sometimes you gotta realize the right thing will come to you,” Moore said.