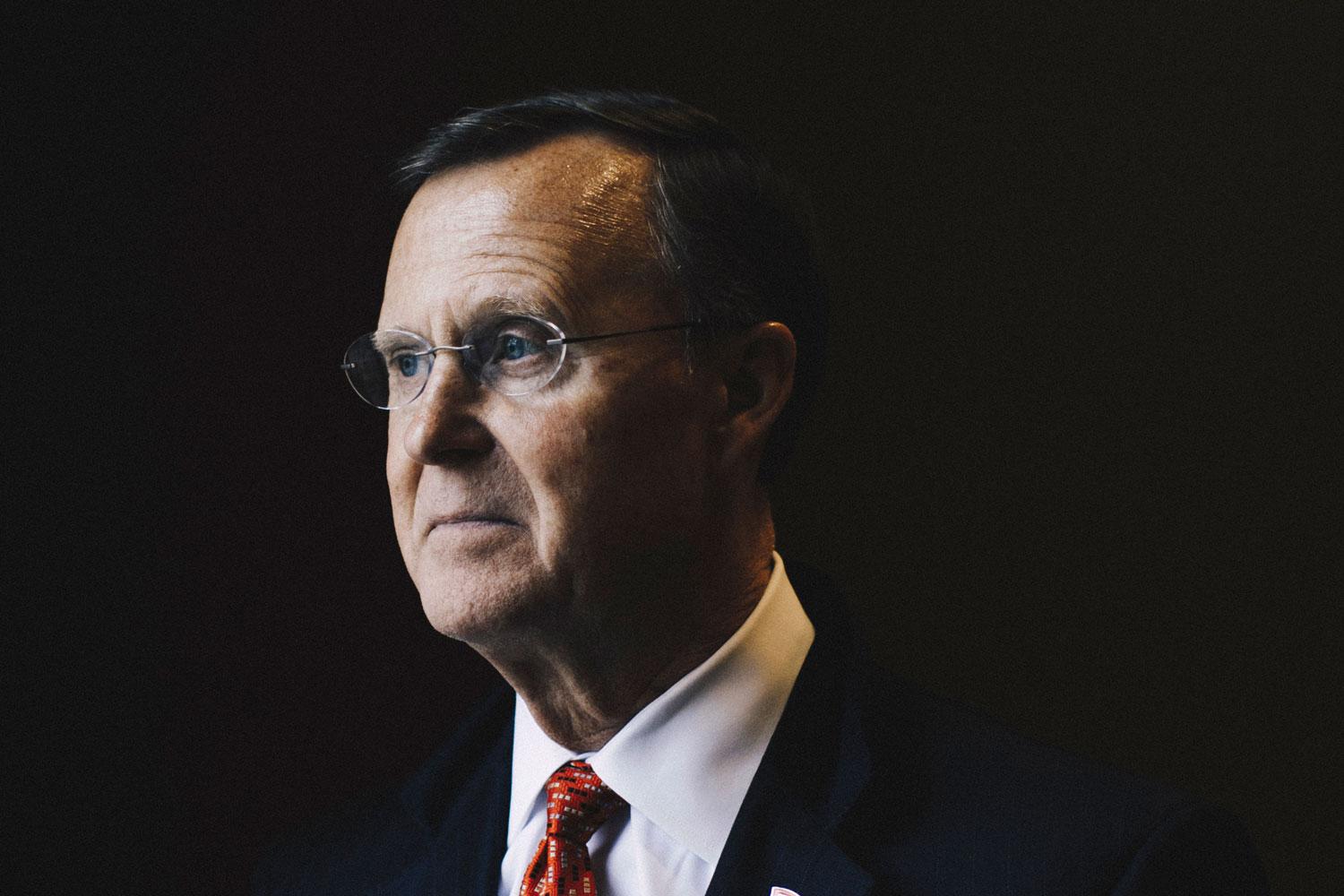 From the magazine: Speaking for the trees

On an unusually balmy February afternoon, warm light seeped through the branches of ironwood trees and cast spots on the red walls of the elegant sunroom in the Craig Administrative Center.

Once the home of WKU’s first president, Henry Hardin Cherry, the building now houses the office of President Gary Ransdell. Antiques, framed portraits of past university officials and old campus maps adorn its halls and reflect a legacy of leadership and grounds development. Long before his 20 years of presidency will come to an end in late June, Ransdell had already begun the process of imparting his own unique legacy.

Across the street at the Valley, workers carried out early-stage measures to build a new residence hall, and the clatter of construction machinery permeated the serenity of the sunroom.

Ransdell sat with his legs crossed as he looked out French windows at the developing structure. Gesturing toward the scene, his gold watch dangled against a modest blue shirt accented by a plaid tie. A pen was tucked inside his jacket pocket.

“It took me a long time to come to grips with that site for the new residence hall because we’re going to lose some major trees,” Ransdell said as his brow creased. “It just absolutely killed me when we had to take four or five, maybe six large trees on the site to put the building in.”

Ransdell has always had a thing with trees. In the early days of his presidency, he instituted “Ransdell’s rule” to curb the loss of trees on campus. As part of the policy, he must personally approve each tree removal, and then two must be planted in its place somewhere on campus.

Ransdell’s dedication to maintaining campus flora emerged from his desire to preserve the character of the grounds.

“We have a unique campus with the Hill, the rock outcropping, and the trees,” he said. “Most campuses have trees, but we have a rich collection of trees that I consider to be very important to the character of our campus. So, let’s continue to nurture the things that make us distinctive.”

Out of roughly 207 total campus acres, 32.5 are devoted to canopy and 10 to landscaped areas. The rest of the space is divided into 72 acres of turf, 49 acres of parking lots and 30 miles of sidewalks, Twardowski said.

“One of our main goals is to promote biodiversity that will support a healthy ecosystem and broad range of native flora and fauna,” he said.

“Dr. Ransdell has always had a reputation of being supportive of our campus forests,” she said. “From very early on, I nicknamed him our Lorax because he speaks for the trees.”

Ryan said the university first earned Tree Campus USA recognition in 2010 by the nonprofit Arbor Day Foundation, which honors college campuses in the U.S. for establishing and sustaining community forests. WKU has been awarded the title every year since.

“So, not only do [trees] give our campus a really nice aesthetic and feeling, they also keep our buildings cool or warm,” she said.

Recently, the National Wildlife Federation approved the campus as a certified wildlife habitat. And in 2015, ArbNet Arboretum Accreditation program recognized the main campus as an arboretum, and this led to the labeling of the diverse tree species throughout the grounds, Ryan said.

“Our trees have suddenly become part of our extracurricular education,” she said.

In 2008, the university began to experience state budget cuts, a rise in energy prices and an increase in energy use due to new building projects and a growing student population, Ryan said.

In response, WKU phased out its coal-fired heating operations and switched to using natural gas.

“That was a huge step for us – cleaner, more sustainable, better for the environment and frankly it’s proven to be more cost effective too,” Ransdell said.

“We have been able to fund energy cost increases through conservation measures without having to add to our budgets and facilities to do so, and so we’ve watched our energy use continue to drop even after we’ve brought new buildings on line and our enrollment has grown,” he said.

Ransdell’s namesake building on Normal Street was the first Leadership in Energy and Environmental Design certified building on campus and the only structure to earn a gold certification – the second-highest designation. This indicates Gary Ransdell Hall uses less water, reduces greenhouse gases and saves the university money.

Ransdell was also instrumental in promoting “conservation vacations” – shutting down the campus during university holidays to save energy.

“He hasn’t been immediately involved in everything we’re doing, but he’s always there supporting,” Ryan said. “I know he’s busy with a million things, but any time I go to Dr. Ransdell for anything – any kind of support, any kind of advice – he’s all about it.”

In 2011, he was the first person in Bowling Green to lease a Chevy Volt, an electric hybrid car.

A few years ago, Ransdell and his wife went on a two-week Toppers at Sea voyage for students and faculty focused on studying climate change in the North Atlantic.

“They were just as engaged as the students were,” Ryan said. “They came to the classes, participated in all the field trips – he clearly wanted to learn about the issue of climate change.”

“We got to come stand in line with President Ransdell, and he ordered his sandwich and he told them, ‘I don’t want a bag’ – it was awesome,” she said. “He thought it was a great idea, and he was so happy to come out and support us.”

Molyneaux said she hopes WKU’s  next president, Tim Caboni, who will assume the role on July 1, shows the same dedication to sustainability as Ransdell.

Ryan said she hopes he continues Ransdell’s tradition of presenting a yearly President’s Award for Sustainability to recognize achievements in sustainability by faculty, staff or students.

Ransdell remains optimistic that Caboni will continue to support and encourage sustainable practices on campus.

“Dr. Caboni fully understands the unique heritage of our campus and natural values and qualities, and I think he’ll work hard to preserve those things,” he said. “I’m confident that he will.”

Ransdell said one thing he wished to accomplish in his presidency was a field guide to all the campus flora and fauna, but due to time constraints and tight financial times, he was never able to commission its production.

“I wanted to have a field guide prepared so anyone could come on our campus and truly understand the natural campus and its values,” he said. “I’m disappointed that I won’t get that one done.”

But the effects of his commitment to conserving trees and the natural landscape of campus will continue to flourish long after his leave.

Ransdell said the university plans to expand South Lawn into a grove of 30 to 40 oak trees where Tate Page Hall now sits. However, he won’t be on campus to see the building come down.

“The trees will grow large and majestic,” he said.

In the red sunroom, shadows of rustling branches deepened against the walls as the sun dipped closer toward the horizon, and Ransdell reflected on his green legacy.

Without hesitation, Ransdell said his proudest accomplishments in terms of sustainability were sound conservation measures to save energy and the promotion of campus cleanliness.

“I would say those are two things I’m the most proud of,” he said. “I’m proud that our students and faculty and staff now are taking much greater pride in the natural beauty of the campus.”