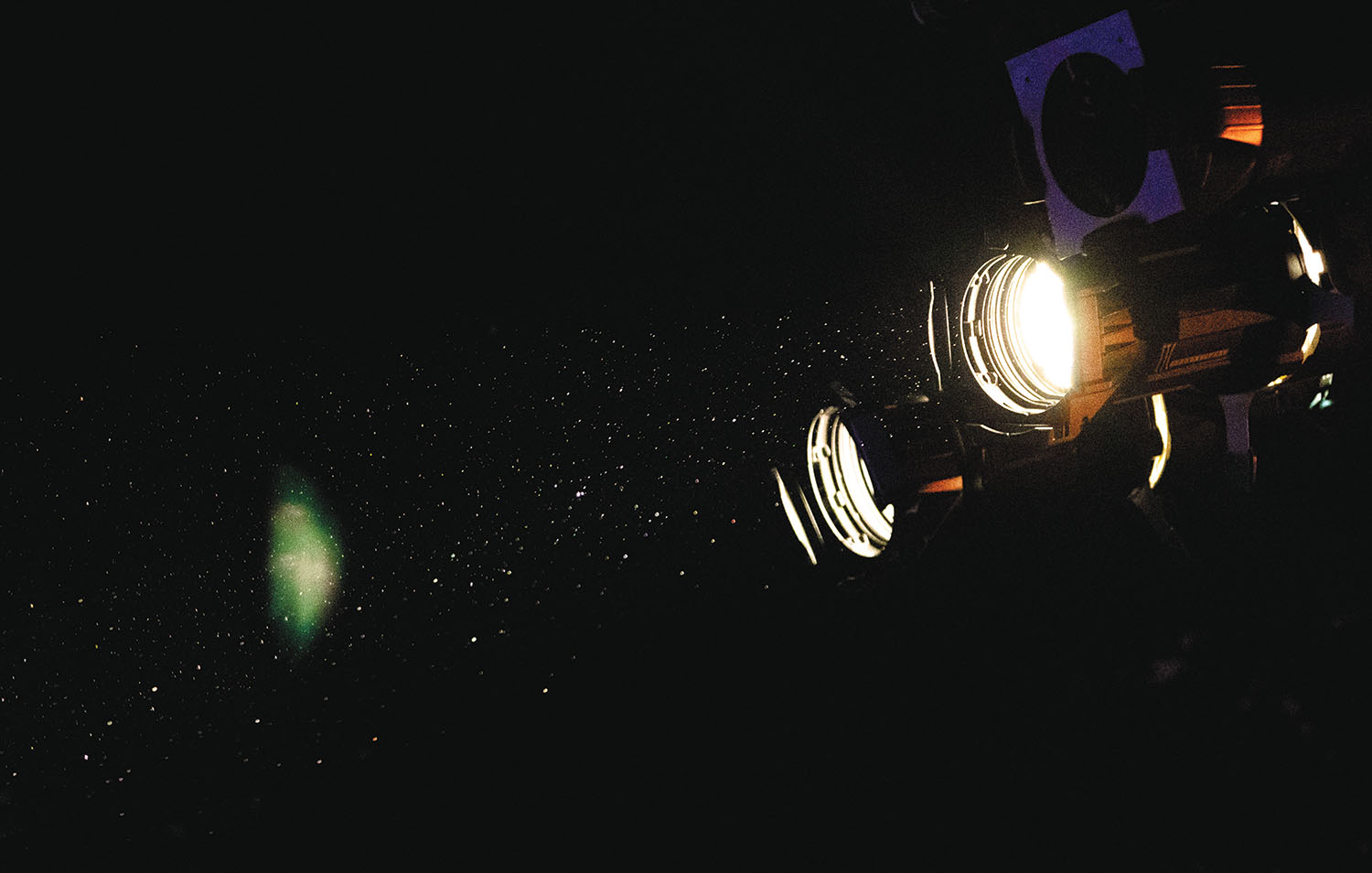 Stage lights illuminate the theater space inside Gordon Wilson Hall. Head lighting designer Michael Frohling’s job is to emphasize how light plays its own role in the story. (Photos by Anna Leachman)

From the Magazine: Through the light

Michael Frohling, head lighting designer for WKU’s theatre & dance department, said he became conscious of the ever-changing nature of light at a young age. He remembers shadows growing shorter and the late afternoon sunlight transitioning to a golden hue of yellow, the bugs and dust mites dancing in the ephemeral gloom.

“It’s always been one of those things that sparks a memory,” Frohling said.

Going on walks with his family during summer afternoons, Frohling noticed the way shadows changed as the evening dragged on, he said. Frohling started his career at WKU as a visiting professor five years ago, but his journey with lighting design has been anything but short.

Frohling sees light as a key role in a production, equally important to actors and set designers.

“I approach lighting as if I’m telling the story with lighting,” Frohling said. “I’m not just there to turn on the lights and provide illumination because if you want that, you don’t need me.”

Mary Kay Samouce, visiting professor and lead set designer for the WKU theatre program, believes the collaboration between set design and lighting design is essential to the success of a production. Samouce said that the collaborative process is like forming a common language between fellow designers.

“If you keep that conversation going on a regular basis through the production process, it’s amazing how things fall together and work,” Samouce said.

Samouce said she was initially drawn to the technical and design side of theater because she loved being part of the collaborative process.

“You’ve got a team; you’ve got other creatives; you’ve got the collaborative process; you have the stage, the audience, the actor,” Samouce said. “I like to be in the mix.”

Although lighting and set design are two different jobs in a production, they share a common goal of supporting the actors and the script, Samouce said.

“When I’m speaking with a lighting designer, and even the costume designer and the director, everyone’s coming to the table with all of their different takes on the script,” Samouce said.

Because of the theme and story of “Eurydice,” Pruitt and Frohling were able to use special lighting techniques to develop the atmosphere on stage, Pruitt said. One of these techniques involved shining a light through a tray of water that was being blown by a fan, thus casting the shadow of the undulating water onto the stage, Pruitt said.

Pruitt, one of Frohling’s former students, had the opportunity to do lighting design for a piece in fall 2021’s “WinterDance: Candyland adventures.” Pruitt used lessons learned from Frohling to light a scene taking place in a chocolate swamp.

“I went with a brownish amber to kind of mimic the color of mud,” Pruitt said.

Pruitt also said she chose the color because it allowed for the context of the piece to give more meaning to the light and vice versa.

“The characters seem like scary monsters at first but then turn out to be warm and friendly, so I wanted something warm that could mimic the characters themselves,” Pruitt said.

Frohling believes that lighting is an integral part of storytelling that is often taken for granted.

Pruitt said lighting can be important in more than one way.

“For me, if I was trying to say something with a light, I would look at where it’s coming from first, and then go to the things of intensity and color,” Frohling said.

Frohling takes a lot of his inspiration and technique from reality, he said. For instance, when lighting a scene, he thinks about what time of day it would be and what season it is.

Lighting designers like Frohling think differently about the influence of light on people’s everyday lives.

Pruitt said she didn’t become conscious of the atmospheric quality of light until she switched her major to theatre design and technology.

“It made me notice more of the sounds in the room like the fan blowing right now or noticing how there’s only one light, so it’s dim and has shadows in the corners,” Pruitt said. “You know, stuff that we don’t normally think about every day.”

According to Frohling, each production requires a unique approach and an open mind in regard to the script, set and costumes, but it all starts with the director and their vision.

“Lighting is an art form, but it’s not something you think about as a medium because we’re surrounded by it every day,” Frohling said. “You don’t even think about it, you take it for granted until it’s gone.”