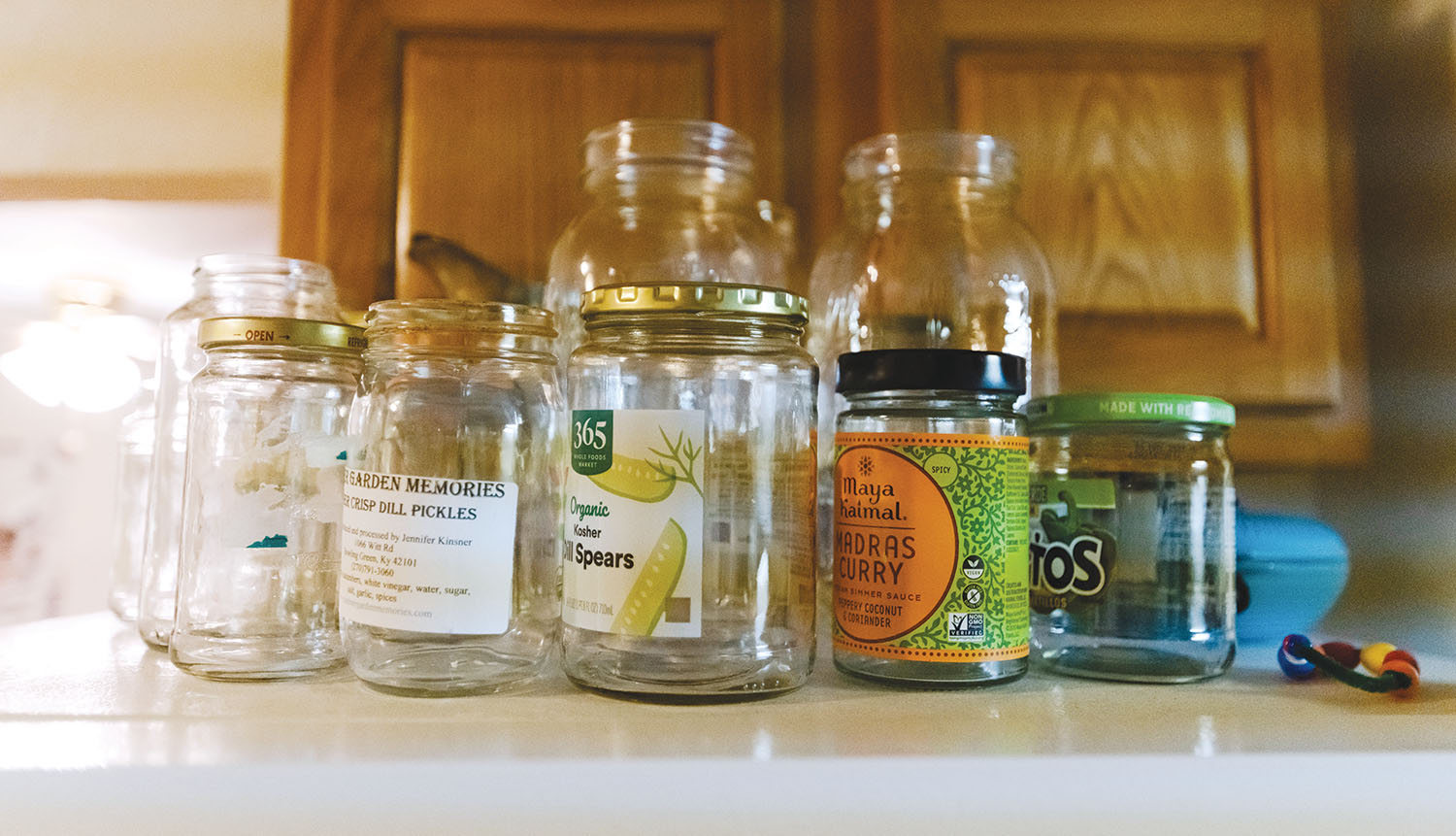 When Krystalin Thompson empties jars, she rinses and cleans them to be reused for a variety of purposes, like props for her son’s playtime. (Photos by Allie Hendricks)

From the magazine: Waste not, want not

Krystalin Thompson is a single parent, elementary-school teacher and rock climbing instructor, who was struggling to make ends meet.

Thompson, a resident of Bowling Green, has been making changes toward sustainability over the past couple of years to relieve her economic stress. She is a strong believer in sustainable lifestyles as it not only helps to save money in everyday life, but also saves the world, she said.

One way Thompson relieves economic pressure and reduces her impact on the environment is by consistently riding her bike instead of driving a car.

“I commute via bike mainly, and my commute to work is a little over 3 miles. It is my main form of transportation throughout the work week,” Thompson said.

No matter the temperature, Thompson bikes, rain or shine, increasing her feeling of self-sustainability.

“We just try to do a lot of stuff ourselves,” Thompson said. “The main thing about sustainability, I feel like, is not relying on the big box stores much.”

“Shopping small and shopping locally is a huge deal,” Hezik said. I think a lot of people are familiar with non-food items, but food is also a big deal.”

Thompson said that when she doesn’t grow it herself, she buys her produce from local places like the Community Farmers Market to support the community rather than a grocery giant.

“When you realize how much the CEOs of these companies are profiting, it makes me not want to support them,” Thompson said.

Hezik said that when people shop small, they are able to form a connection with the person selling the food.

“By purchasing directly from the local farmer, you are able to have those conversations with them, knowing how they are farming their land, how they are ensuring the growth of these crops,” Hezik said.

Hezik promotes sustainability and supports her community through her role at the farmers market.

Aside from knowing exactly where the food comes from, Hezik said that the farmers market allows Bowling Green residents to get the best deal for their food.  The farmers market offers the double dollar program to any SNAP recipient every Saturday and Tuesday. They also accept Big Red dollars from WKU students.

Thompson buys most of her produce from the farmers market. She also works to implement zero waste in these purchases.

“There are three Rs for a reason,” Hezik said. “Recycling is a great tool, don’t get me wrong. But there’s a reason that they are in that order. Reducing is really going to be a key thing first, and then reusing, and finally recycling.”

“I keep my vegetable peelings for vegetable broth. I try to make my own broth because you can use the whole vegetable, there’s no use in throwing away this stuff,” Thompson said.

Thompson’s sustainability efforts continue throughout the kitchen. Instead of paper towels, Thompson has “unpaper towels,” which are cloth, making them a washable and reusable alternative, she said. These help her family to decrease the usage of single-use paper towels, avoiding more waste.

Thompson and her family opt to eat meat, but use it intentionally, incorporating the nose-to-tail diet in their life, meaning that they put every part of the animal to use.

“Whenever you get your own animals slaughtered, you get the organs with it as well, and we do eat the organ meat,” Thompson said.

Along with sustainability in Thompson’s eating practices, she explained that she avoids purchasing new items to encourage intentionality and avoid waste.

“As part of my sustainable living, I don’t like to buy new,” Thompson said.

A porch drop-off is a way that Thompson and her circle of friends are able to share unneeded items. Thompson explained that an unwanted item in one household is needed in another, so the item gets dropped off on the porch of the person in need.

Thompson was involved with a porch drop-off that included a toy set for her kid and a wool dress that she used for work and church.

Thompson said that she rarely needs to thrift, because of the porch drop-off system. She said that when she does, she chooses specific stores to shop at. Her top choices are Potters Children’s Home, Tuesday Treasure Sales and St. Theresa’s.

When Thompson does shop for necessities, she buys food in bulk and avoids as much packaging as possible, bringing reusable bags with her everywhere. Thompson reuses other items as well.

“I save all my jars,” Thompson said.

Leslie North, director of sustainability for WKU, challenges her students and everyone to record their waste and get a sense of how much waste an individual produces.

“Until you force yourself to think about how much trash you are actually producing in the course of a day, you don’t realize how much it adds up,” North said.

“A trash audit is a really good place to start,” Hezik said. “‘What does my trash look like normally? Are there steps I can eventually take to slowly reduce these single use items?’ It definitely does not need to be overnight. Please, take your time with it. You don’t need to strive for perfection. The fact that you’re even just taking one tiny action is still really important.”

Thompson explained that her sustainable lifestyle not only decreases her waste, but it also helps her save money.

“There is a big crossover with frugality and sustainability,” Thompson said.

North sees a different connection between spending money and living a sustainable lifestyle.

“The biggest impact that consumers in general can have with regard to sustainability is with their dollars,” North said.

“This is a breakdown of what are some of the ‘dirtiest’ produce products that are more well known for having lots of pesticides and herbicides on them,” North said.

She said that since organically grown food is expensive, people may struggle to afford it; the “Dirty Dozen” list details which produce are least sustainable in how they’re grown and manufactured. North said that the list can help people decide which produce to prioritize buying organically.

Referring to this list is a small step in living a sustainable lifestyle, and North emphasized making small changes to introduce sustainability.

“There are a lot of ways to have a sustainable lifestyle, or to contribute to the environmental well-being, without going to extreme measures — as simple as don’t use a plastic straw at a restaurant,” North said. “Things that seem really small really do add up, like carpooling. You can carpool to the restaurant or to Walmart. Those kinds of things are what I would focus on the most.”

“I mean, I’m the director of sustainability for the whole university and all the time people will post something that makes me say ‘Oh, that’s brilliant,’ and a lot of times they are really simple things,” North said.“You’re gonna be scrolling through your social media anyways, you might as well learn a little something at the same time.”

Thompson explained the importance of taking the shift into sustainability slowly.

“For college students especially, it can be overwhelming starting out,” Thompson said. “Take it slow. Make small changes. Make them where you can, and don’t beat yourself up. It’s not a competition.”

North commented on the individuality in sustainable living.

“Think about sustainability as an individual,” North said. “Take small steps and celebrate those small steps. Be proud of the small things that you are doing to impact the environment.”

Hezik said that advocating for sustainability could be a good first step.

If you’re a student who is really into advocacy work, look into what local initiatives are going on and get involved somehow, Hezik said.

Thompson said that her commitment to sustainability did not happen overnight.

“This all evolved. I wasn’t like ‘OK I’m gonna live a sustainable lifestyle,’ but it all has just fallen into place,” Thompson said. “I am more intentional in my life. It really prompts you to think about what your priorities are, what you’re supporting and what you want to be putting out there into the world.”