Over 400 voices flooded the Caroll Knicely Center Auditorium in support of a group of 13 drag queens during the drag show hosted by WKU Housing and Residence Life on April 11. Audience members stood by the stage with arms outstretched and dollar bills in hand as the performers paraded their effervescent costumes to some of their favorite songs. The audience cheered for every performer. The event’s brochure said the drag show was an opportunity to promote the acceptance of drag culture to those in attendance. 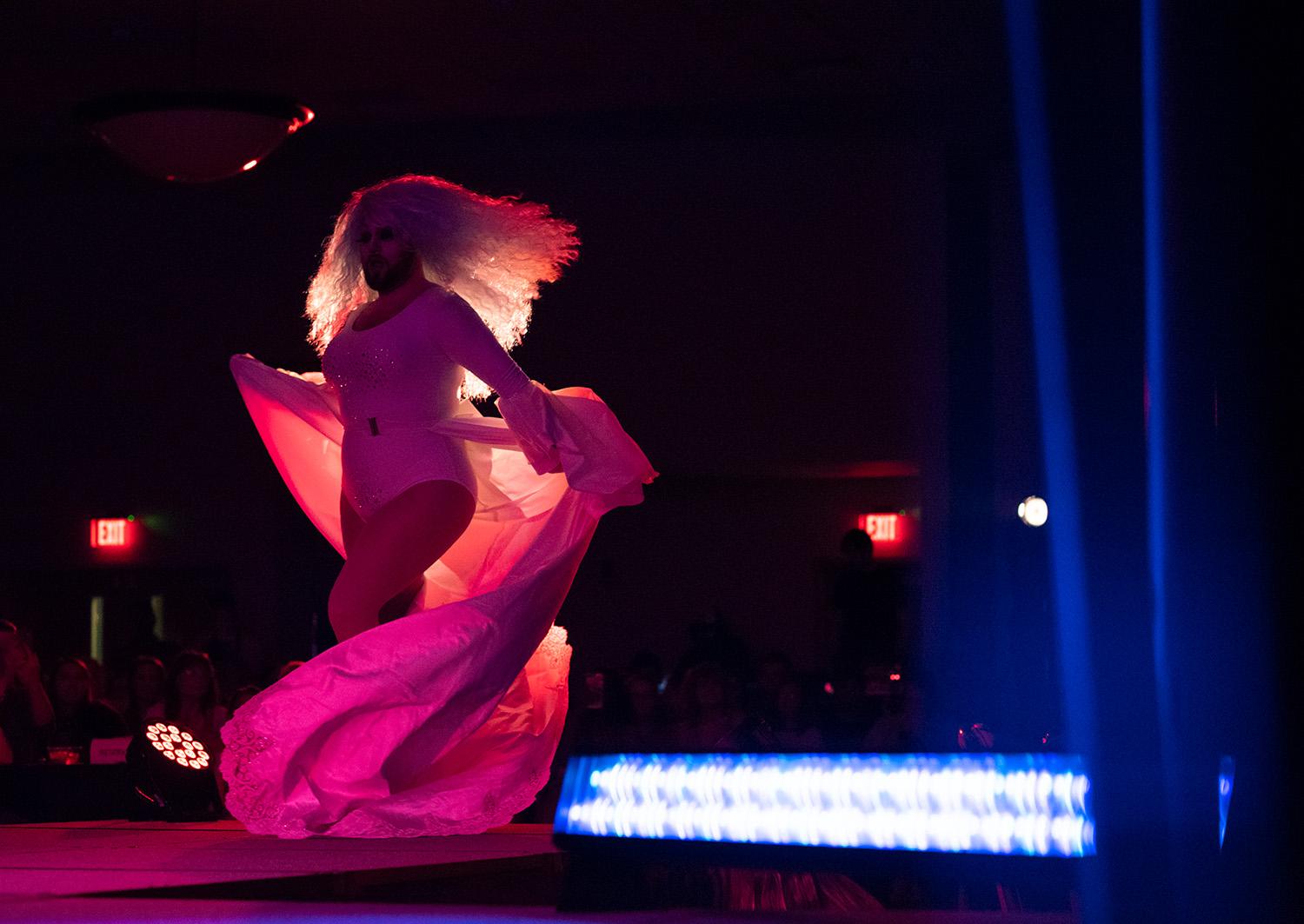 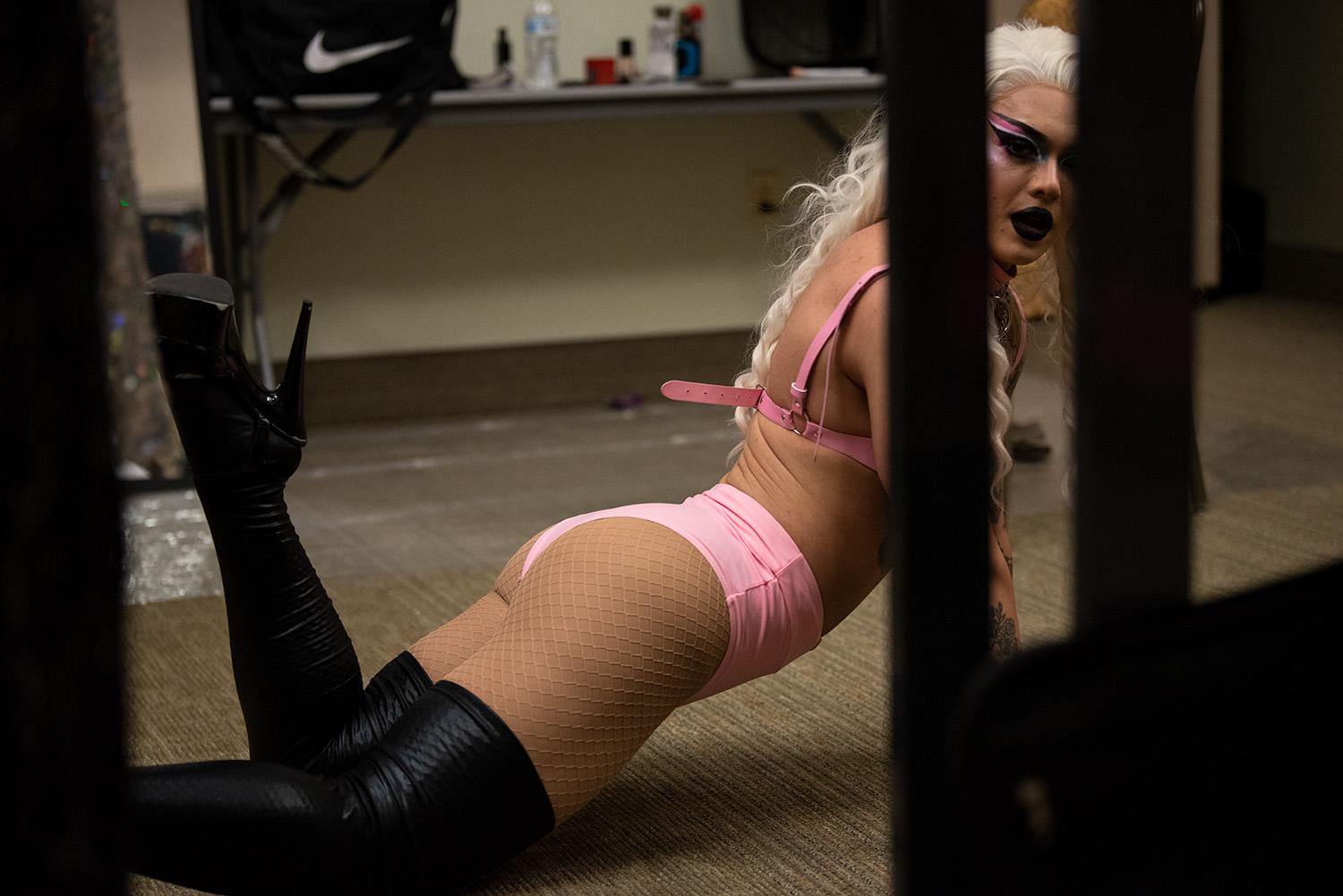 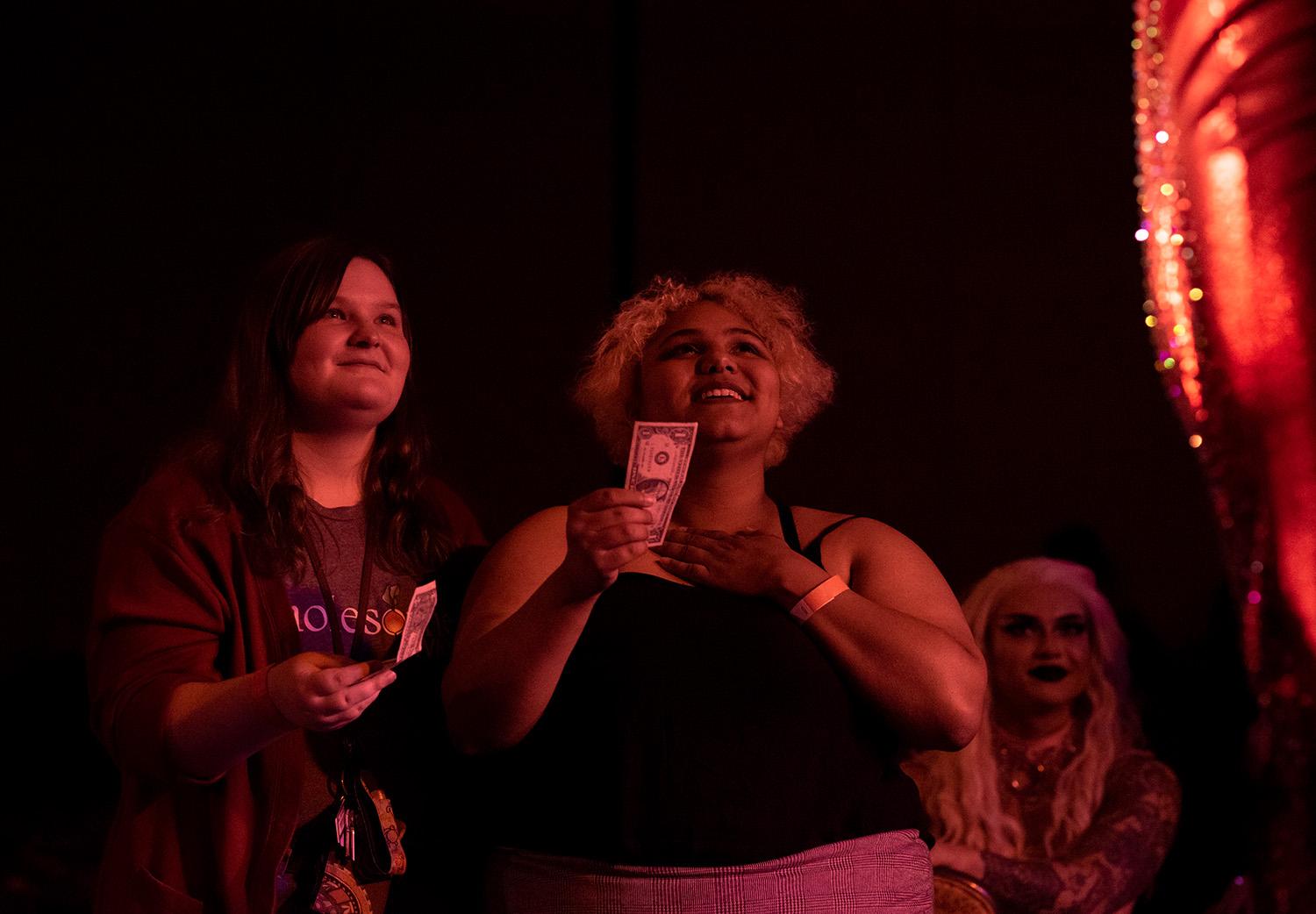 Audience members admire Venus Knight from the side of the stage as she performs to “Baby I’m a Star” by Prince at the WKU Drag Show held at the Knicely Conference Center. Venus Knight performed last before the intermission and again at the finale of the show. Photo by Sam Mallon. 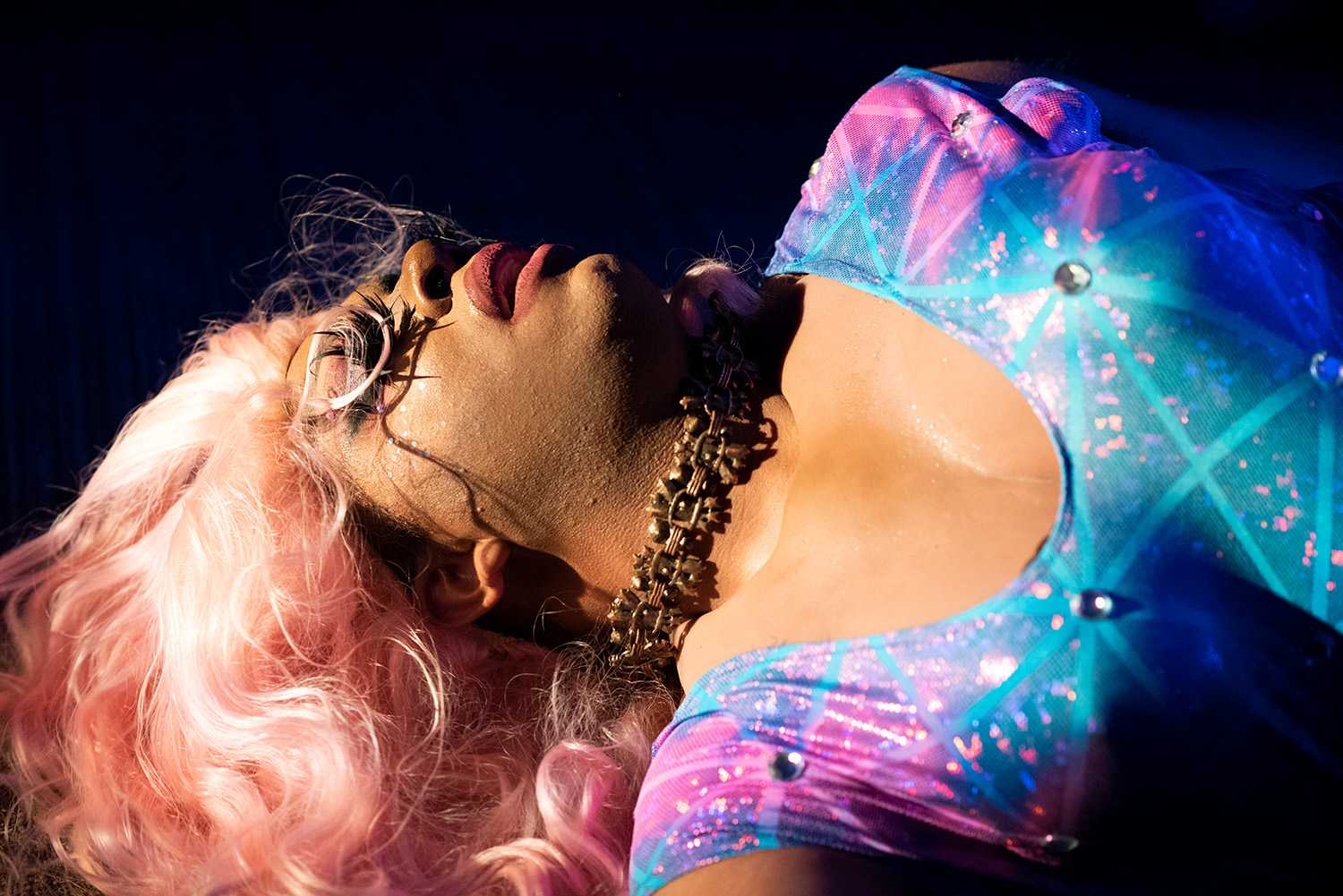 Marcus Harper, a WKU alumnus, performs as Scarlett Mascara at the WKU Drag Show. Harper has performed at this show for three years. “I feel amazing every time I go back and perform there,” Harper said. Harper hopes to return next year. Photo by Sam Mallon. 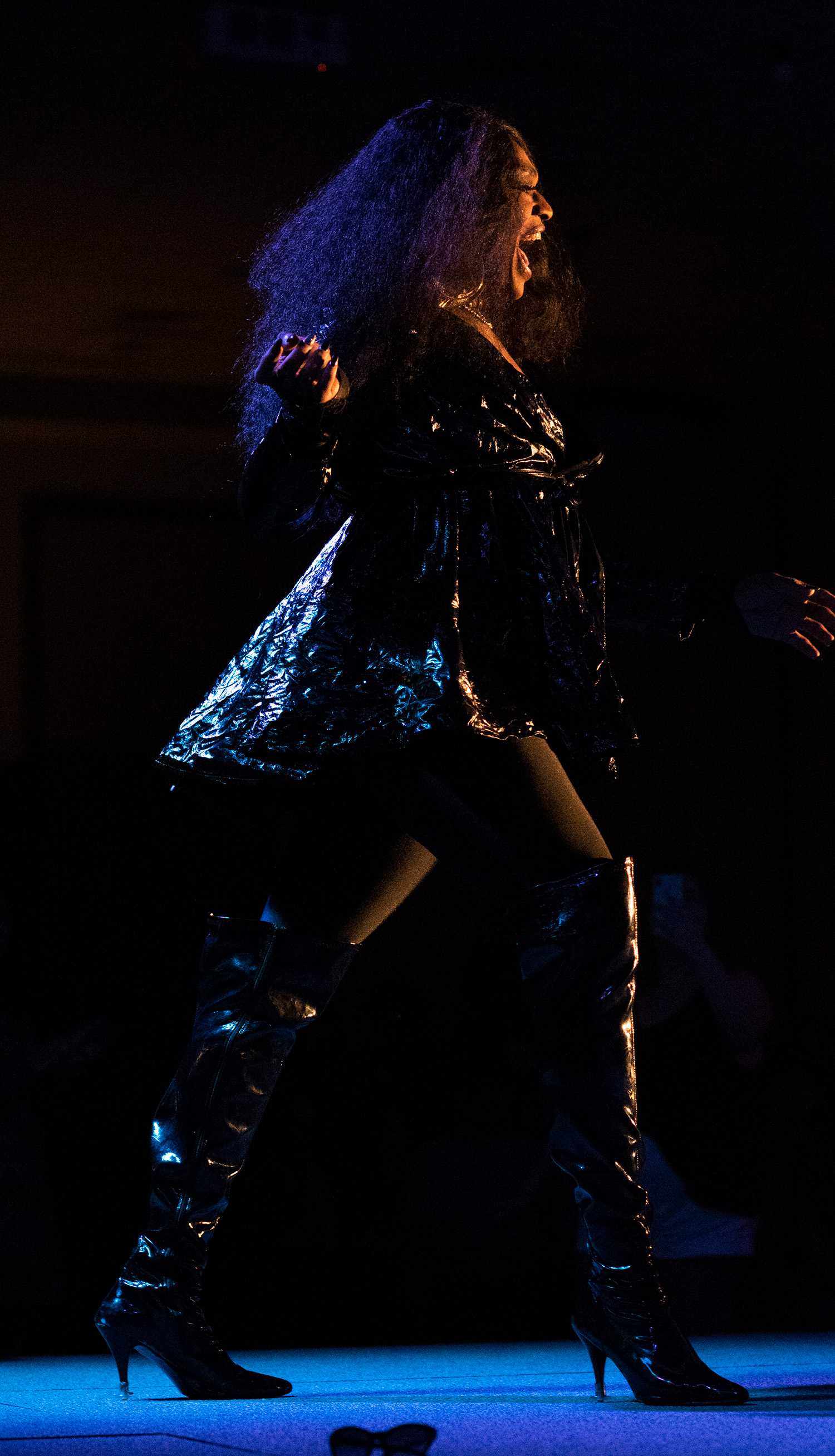 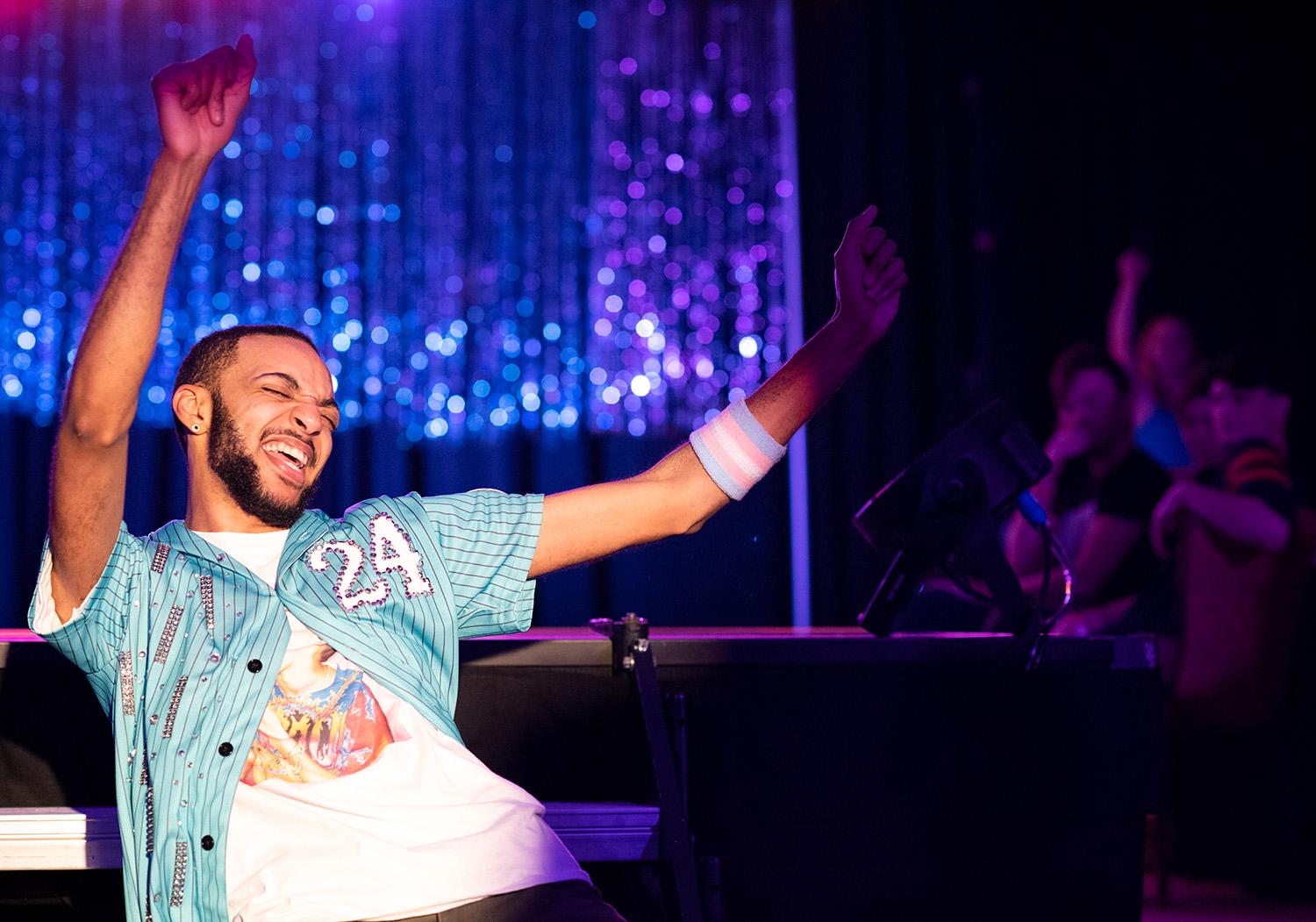 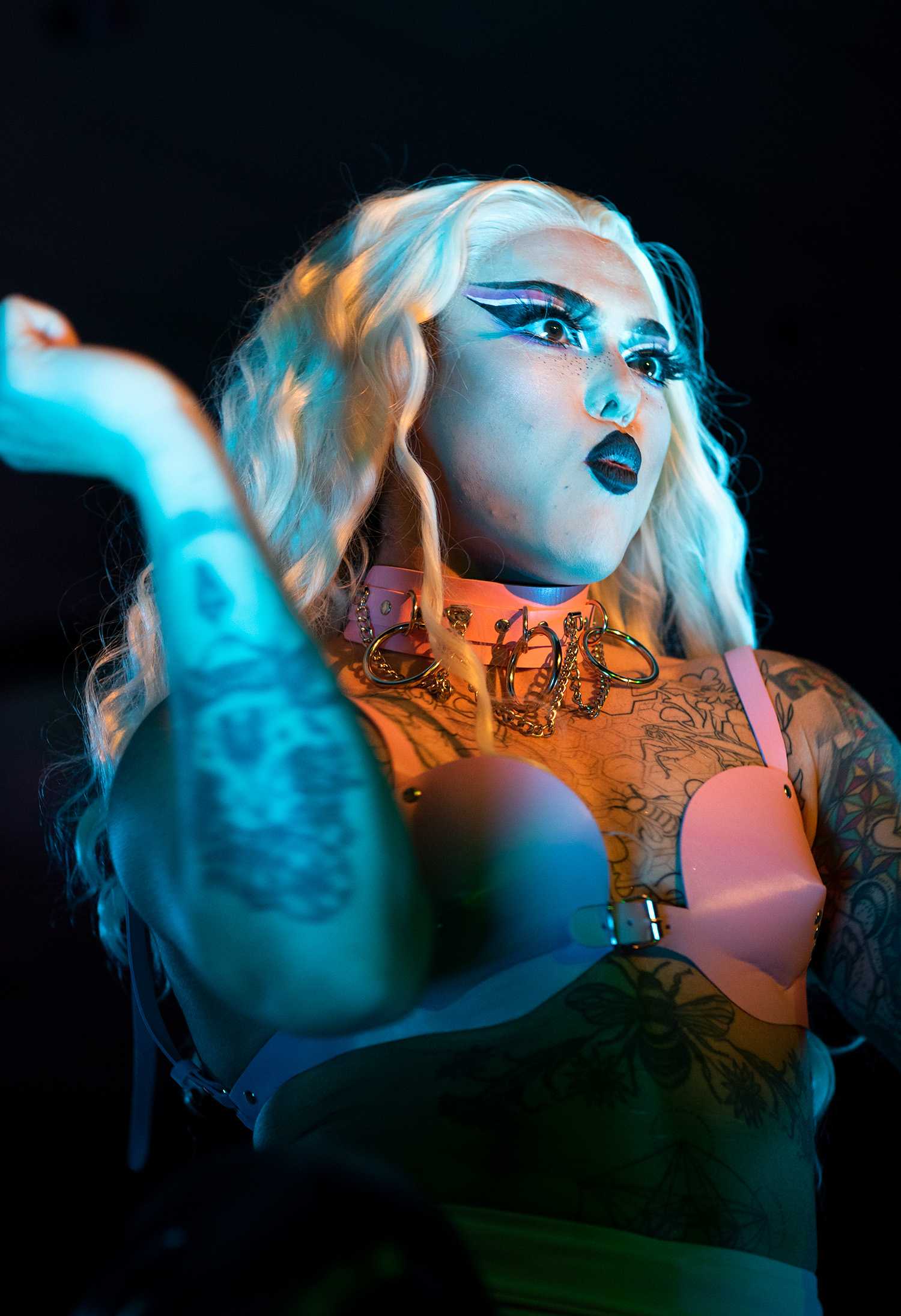 Wicker performs as Spectra Cosmos in WKU’s fifth annual Drag Show. Wicker said he has only been doing drag for about five months. Photo by Sam Mallon. 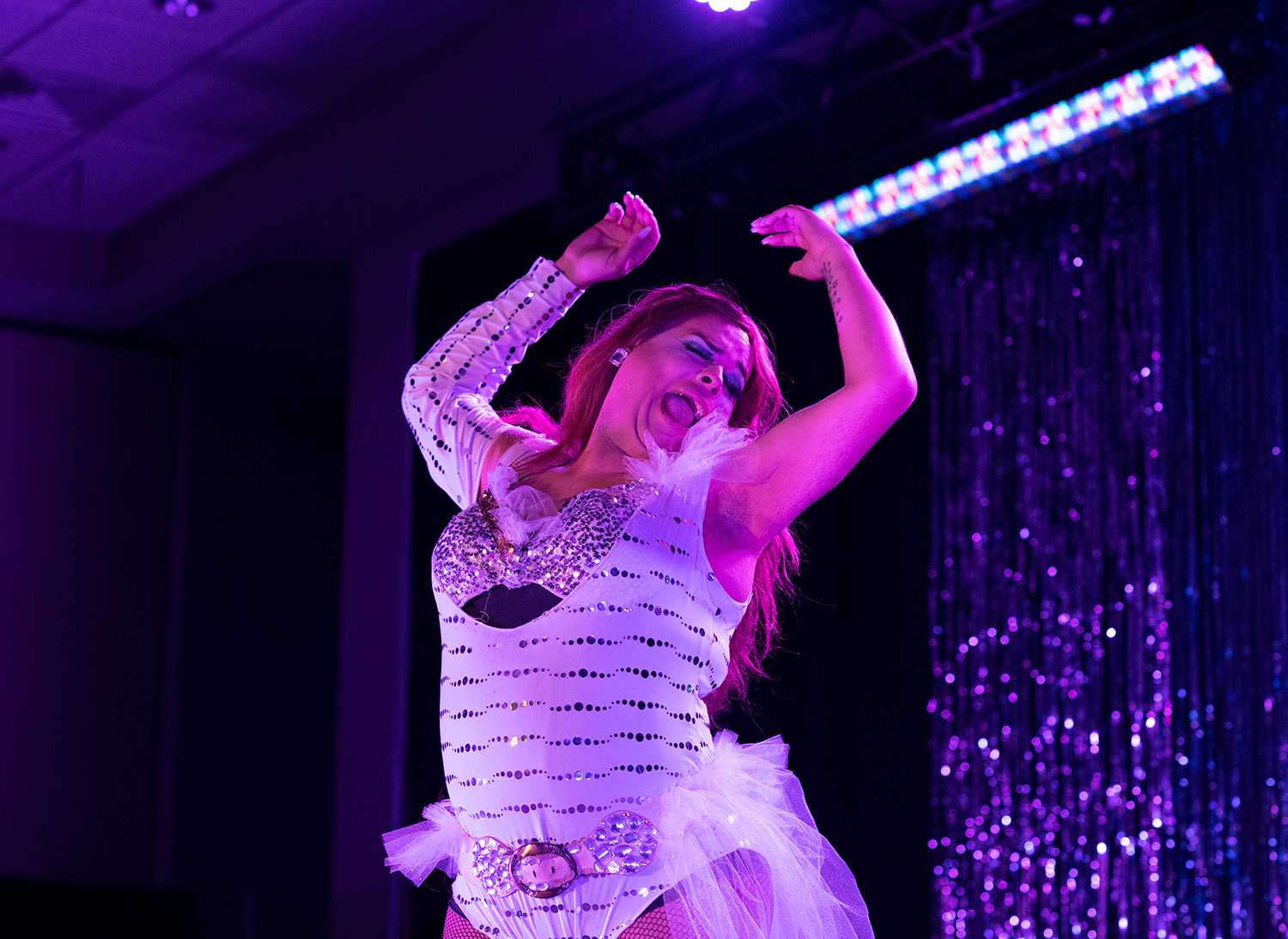 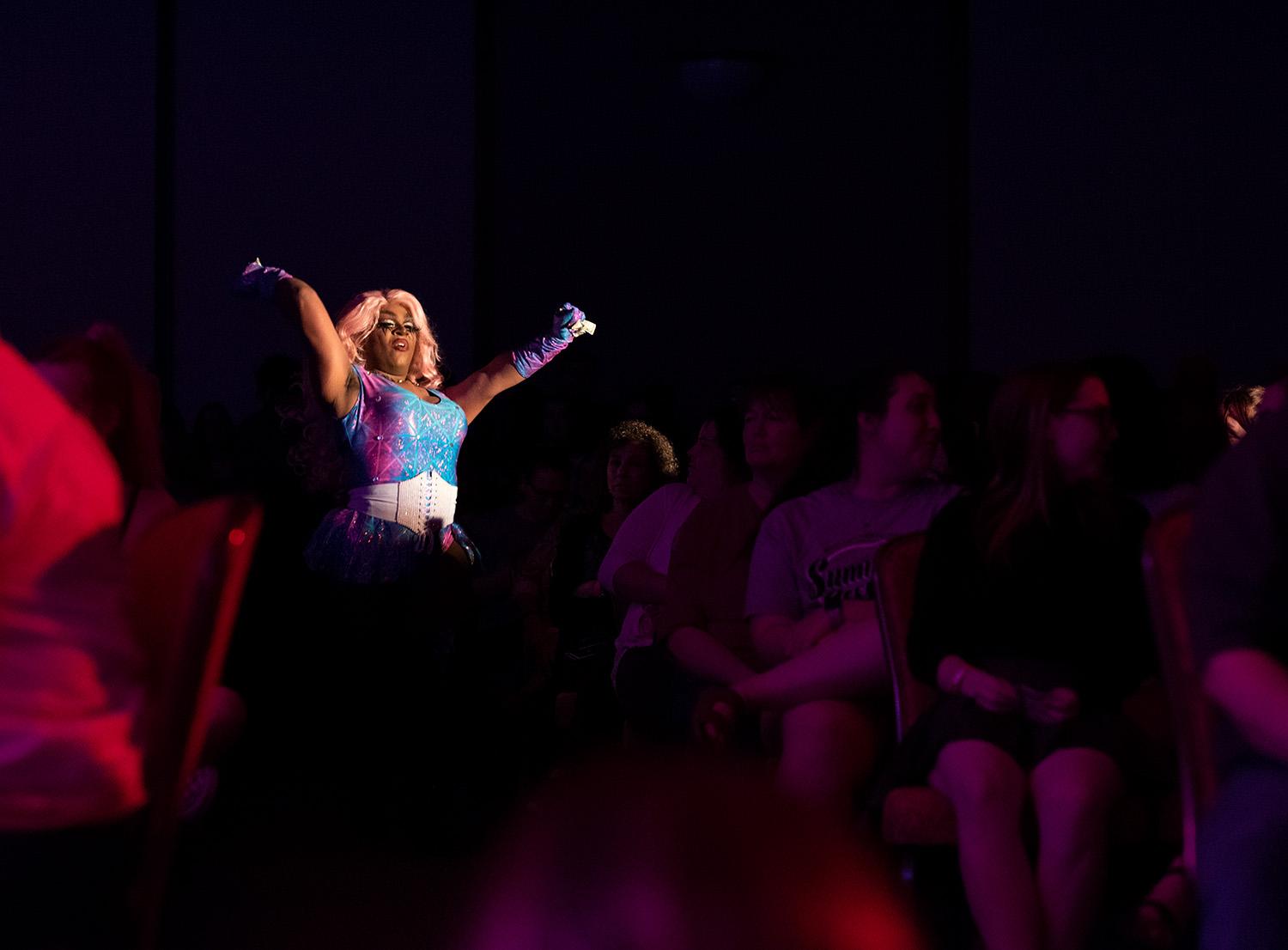 Louisville alumnus Marcus Harper struts through the audience as drag queen Scarlett Mascara. This year was Harper’s third year in a row performing at WKU’s fifth annual Drag Show at the Knicely Conference Center. “I first found interest when attending the 2nd Annual WKU Drag Show and I was so mesmerized that I thought to myself, hey I wanna try that,” said Harper. Photo by Sam Mallon. 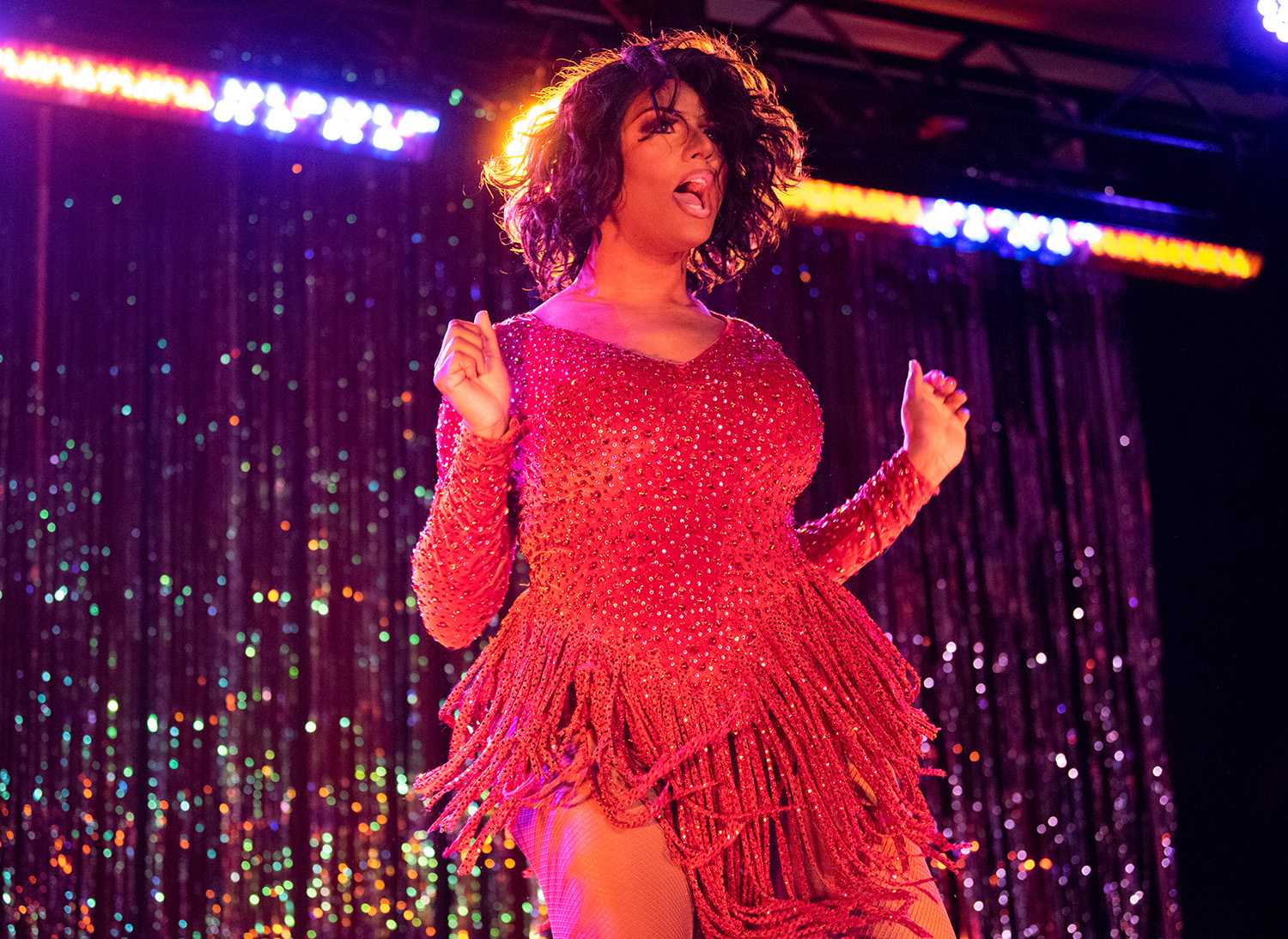 Knight performs to “Baby I’m a Star” by Prince at the WKU Drag Show held at the Knicely Conference Center. Knight said she has been performing as a female impersonator for almost 10 years. Photo by Esther Heath. 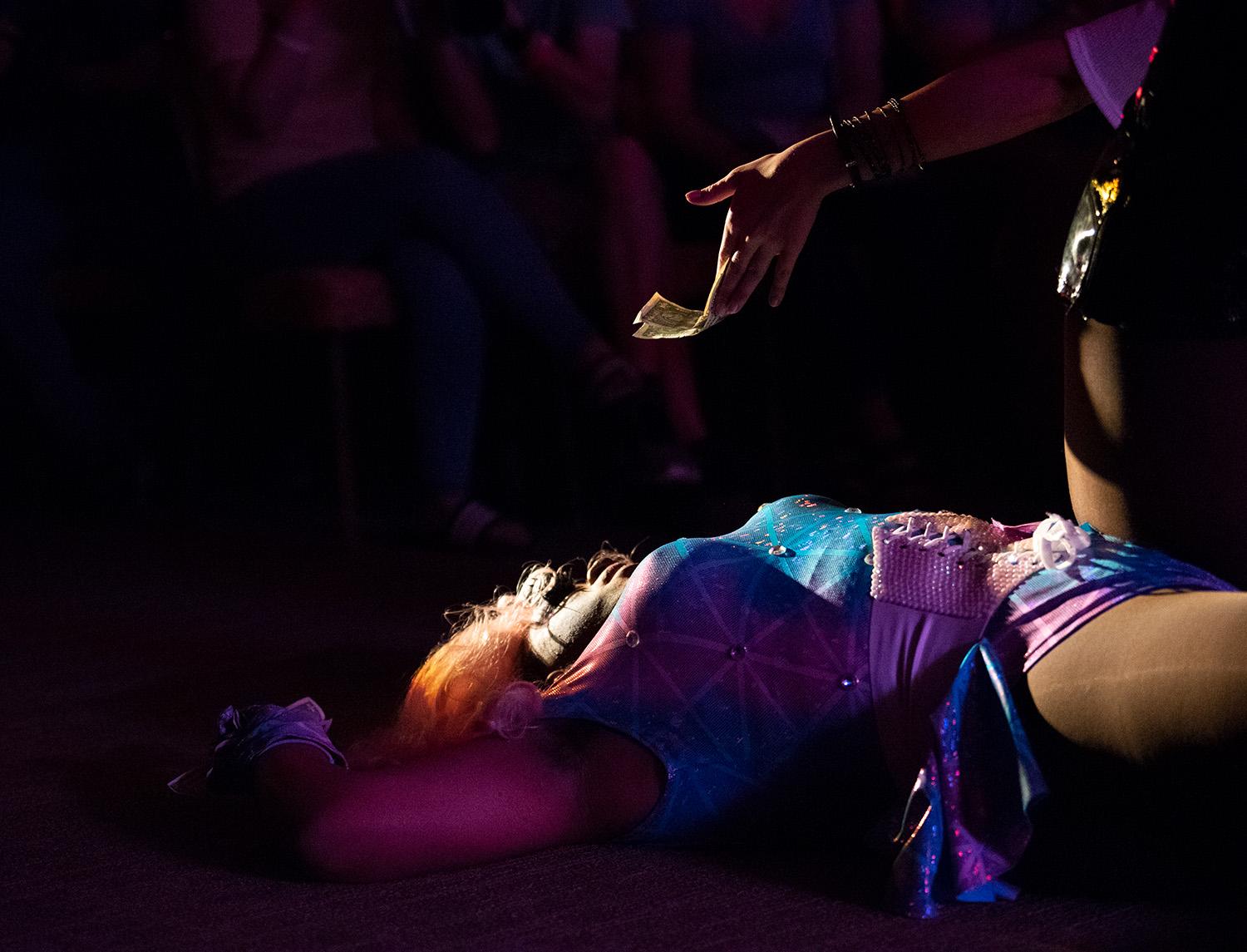 Attendees tip Harper as he performs as Scarlett Mascara. Harper said that WKU’s annual drag show was part of the reason he became interested in drag. Photo by Esther Heath. 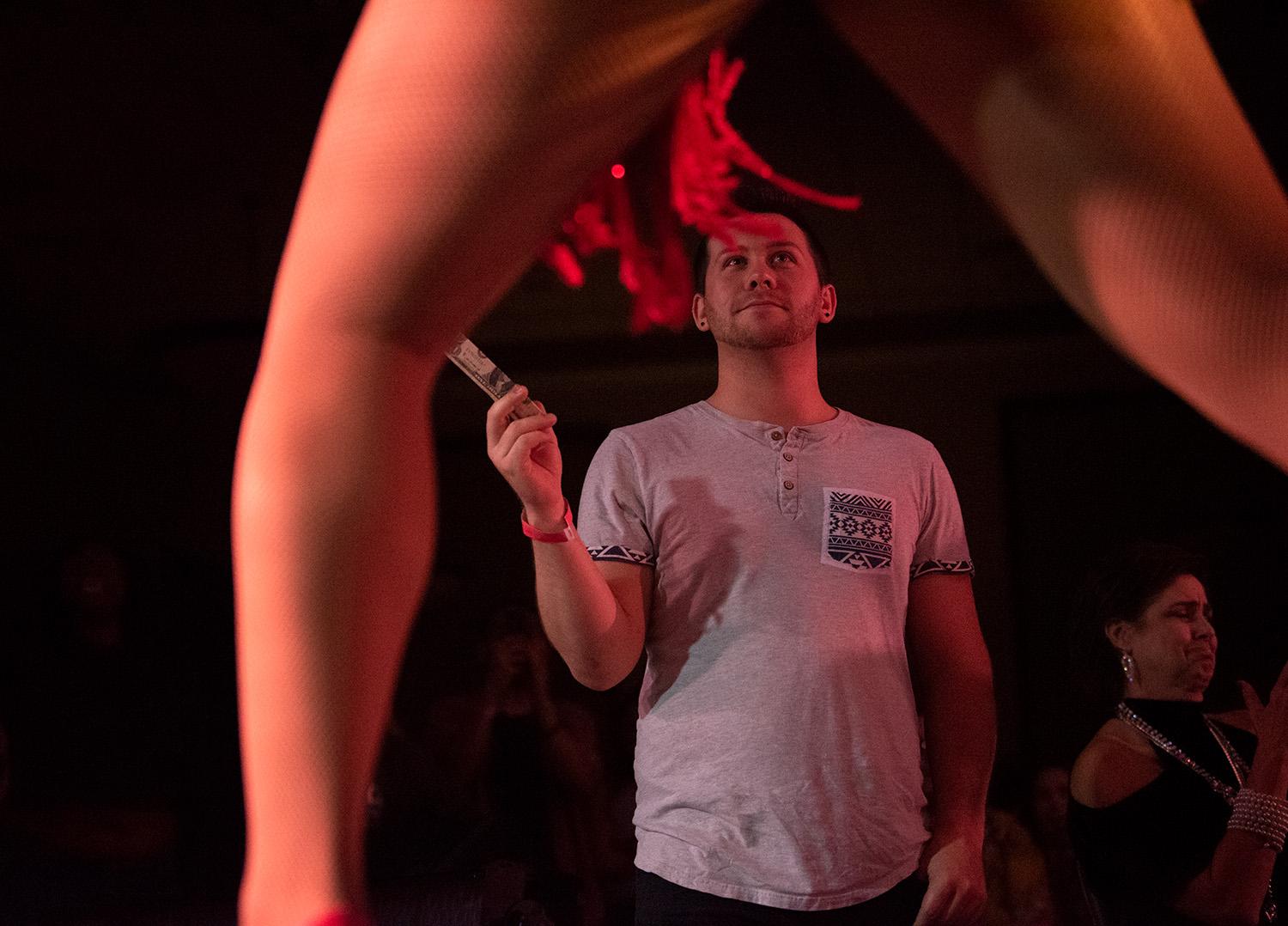 Utica senior Tyler Sanders watches Knight as she performs to “Baby I’m a Star” by Prince during the WKU Drag Show. Knight said she has performed in every show since the first WKU Drag Show. Photo by Esther Heath. 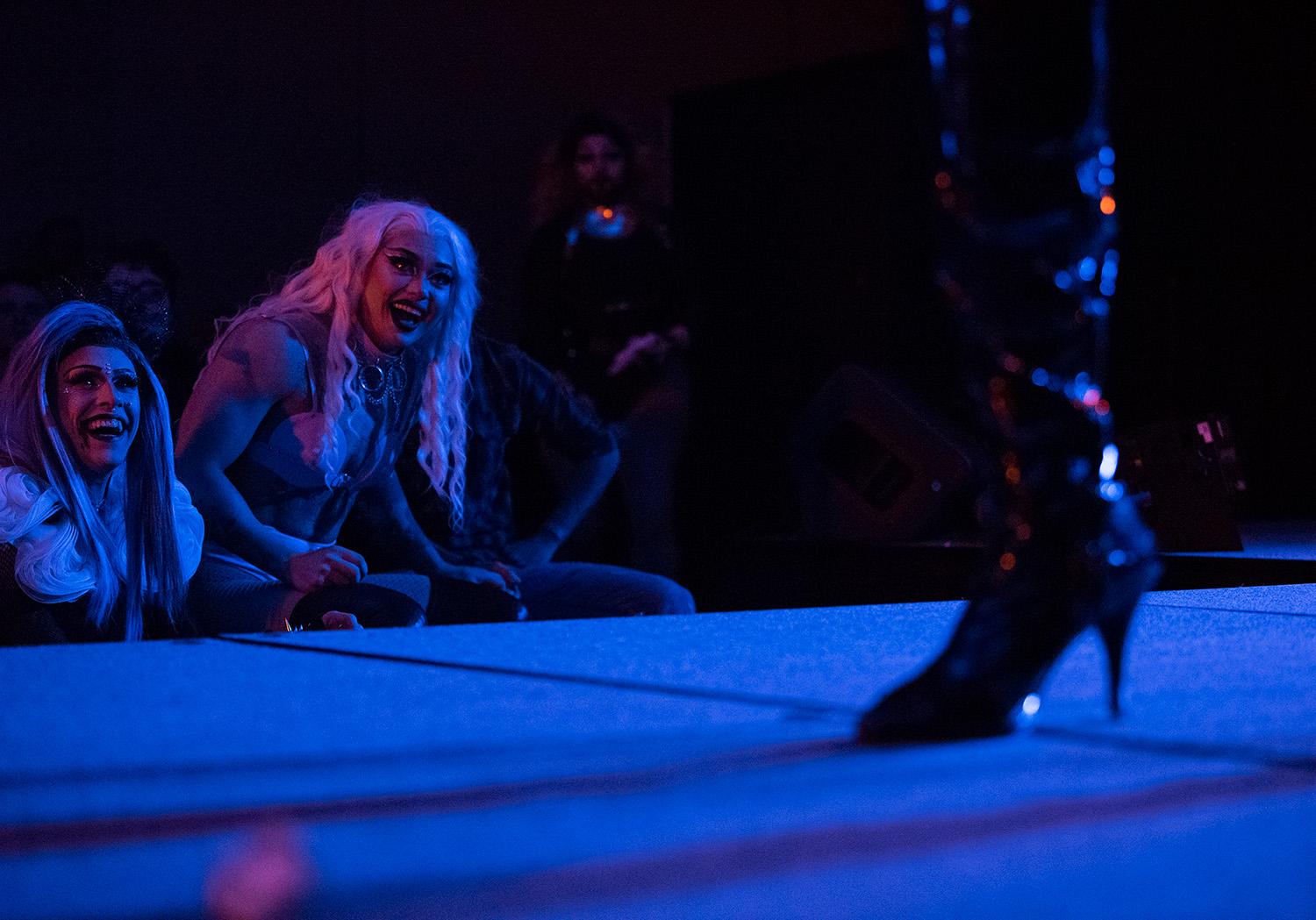 Wicker, who performed as Spectra Cosmos, watches Broussard perform as Miz. Thickums from the audience at the WKU Drag Show. Wicker described Cosmos as Kentucky’s very own stripper-ific personification of a dumpster fire in heels. Photo by Esther Heath. 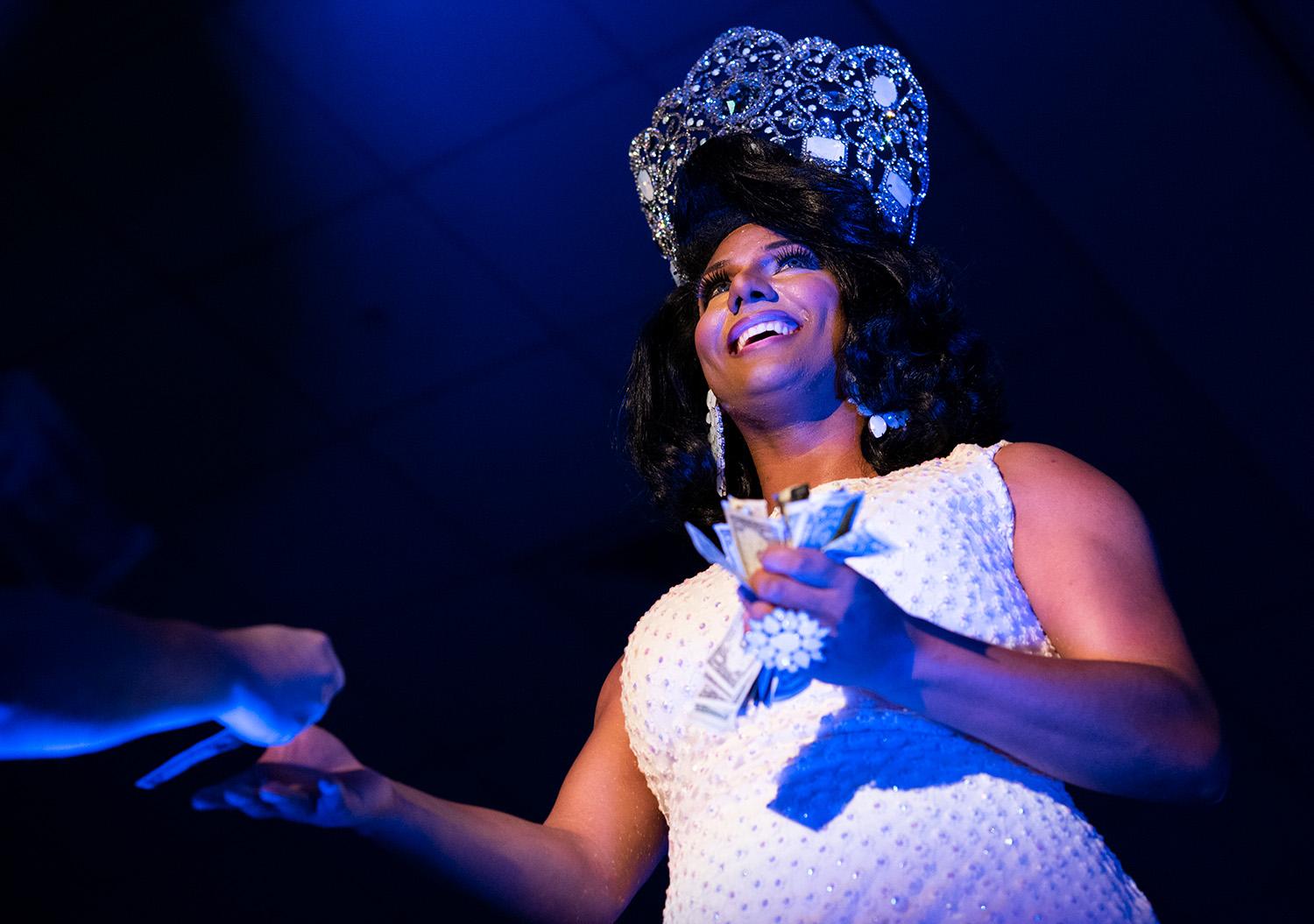 Knight accepts tips from the audience as she finishes her finale performance at the show. Knight wore a red dress for the most of the night but changed into a floor-length ballgown and a crown she had previously won for the show’s finale. Photo by Sam Mallon.

Editor’s note: This story has been updated to correct a misattribution in a photo caption. The Talisman regrets the error.