Though many view human trafficking as an international phenomenon, its presence in Kentucky, and even Bowling Green, is often overlooked.

The Kentucky National Human Trafficking Hotline has recorded a steady increase in the number of reported human trafficking cases in the state — from 34 in 2012 to 87 in 2016.

Local organizations, such as Phoenix Rising, a nonprofit located in Bowling Green, aim to work directly with victims of human trafficking to provide them with support, counseling and education.

Phoenix Rising’s founder and executive director Azurdee Garland started the organization about 10 years ago. She said she began to realize the local prevalence of human trafficking and commercial sex exploitation among children and wanted to help prevent future cases.

Though Garland said she is happy with the progress made through Phoenix Rising, she believes there is a long way to go.

“I think we have barely touched the surface,” Garland said. “There is so far to go, and we have been making lots of progress this year, while at the same time I recognize that we have a great deal of unchartered territory in front of us. The reality that trafficking happens in a community is something that most communities do not want to admit because it doesn’t look pretty.”

Garland said she believes many people are unaware of how big of a phenomenon human trafficking is and that it takes place in Bowling Green.

“It’s all over, and yet some folks still want to live in this bubble, and they want to believe that trafficking doesn’t happen,” she said.

Rose Marie Woolbright of Bowling Green is currently serving a 10-year prison sentence for human trafficking and a 10-year sentence for being complicit to rape, according to Kentucky Department of Corrections records. The Bowling Green Daily News reported that in 2013 Woolbright was accused of exchanging sex acts with a 13-year-old female relative for money from two men.

Anthony Johnson from Bowling Green was indicted by a Warren County Grand Jury in early 2017 on a charge of human trafficking of a 16-year-old girl and six counts of unlawful transaction with a minor, according to WBKO. Johnson was convicted on two of those counts and will be eligible for parole in September 2018, according to the Kentucky Department of Corrections. In 2015, he reportedly drove a 16-year-old girl to Southside Auto where she had sex with the business owner, Randy Huff, in exchange for $40. The minor told the police that she split the money with Johnson.

In 2016, Patrick Boston and Shaon Matthews were charged with human trafficking and promoting prostitution. Each man was convicted only on the prostitution charge. The Bowling Green Daily News reported that, according to court records, the men offered a ride out of state to a woman they met at a Bowling Green halfway house in exchange for performing sex acts. They arranged for sex between the woman and multiple men, who paid for the encounters. The men kept the money.

Boston and Matthews used the classified advertising website, Backpage, to advertise the woman’s sexual services. According to a U.S. Senate report published in January 2017, the site is involved in 73 percent of all child trafficking reports received by the National Center for Missing and Exploited Children.

Phoenix Rising board president Missy Cunningham said many victims go unnoticed, as traffickers often keep victims under their control by threatening and beating them. 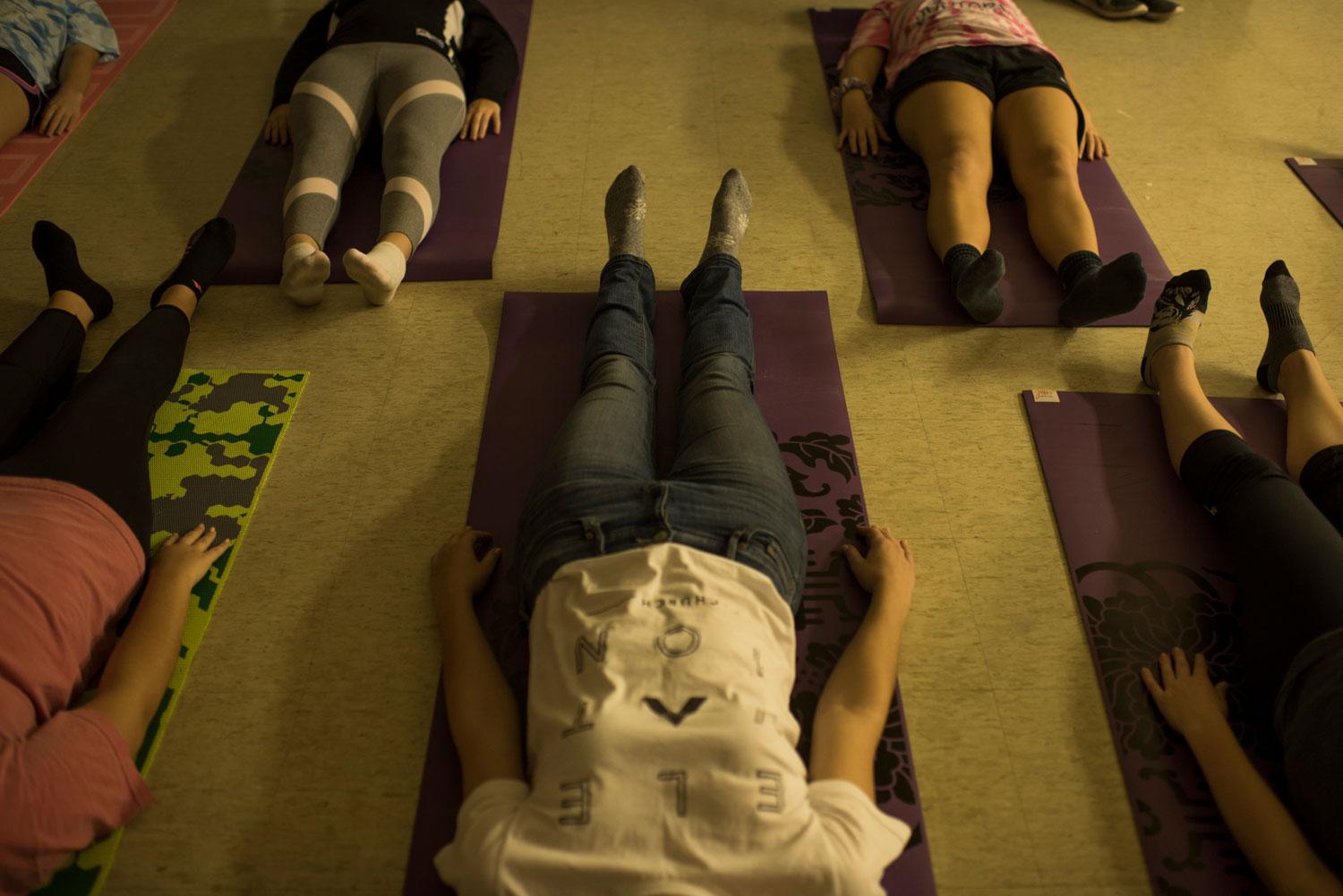 The kind of meditation they do is called “progressive relaxation technique.” It helps focus on not only relaxing muscles, but relaxing your mind as well.

In order to combat this local issue, Phoenix Rising staff members and volunteers not only work with victims, but also go out into the community and partner with several other organizations.

A couple times a month, Phoenix rising has a “street team” that goes to strip clubs and other areas where women and children are exploited. They give them food and other things they need, and they interact with them.

“Through that process, they’re realizing that they matter to another human being, and that human being doesn’t want anything from them at all,” Garland said.

In the past year, Phoenix Rising has gone from taking place in Garland’s home office and her car to having a stand-alone facility. Though Phoenix Rising’s only office is located in Bowling Green, Garland said it has national outreach. It aims to serve victims all over the country by providing them with what they need, whether it is rehabilitation for substance abuse, medical attention, mentoring or counseling.

“We meet the victim wherever they are,” Garland said.

Garland said Phoenix Rising also leads the South Central Kentucky Human Trafficking Task Force. The task force aims to make sure victims receive the help they need, such as housing, foster home placement, forensic data collection, or getting back home if they are from a different area.

Garland said one of Phoenix Rising’s long-term goals is to open an eight-bed trauma recovery home where juvenile girls can be housed, finish school and receive in-depth counseling services. 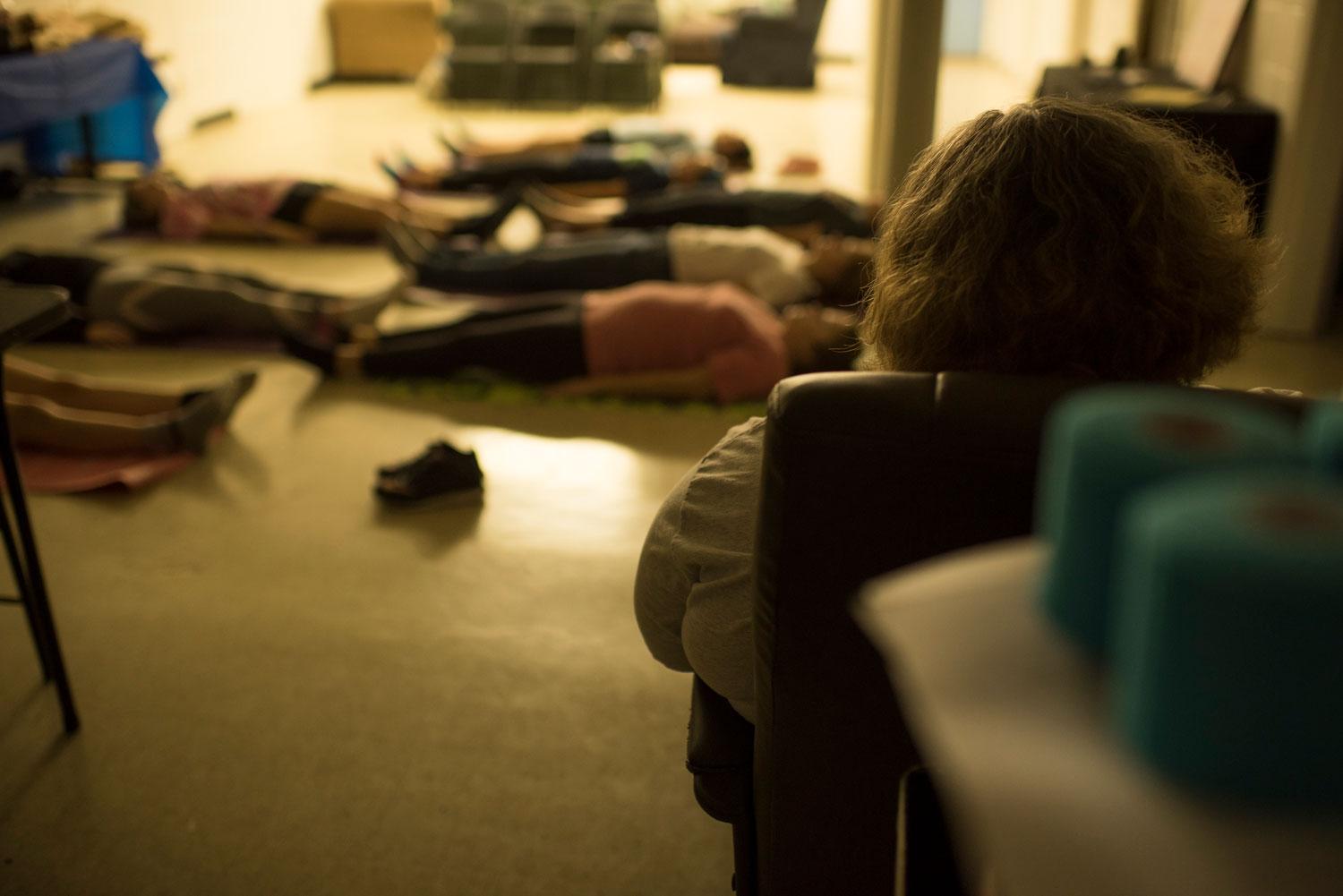 During a Monday meeting, Azurdee Garland has the participants meditate and focus on relieving day-to-day stress. “As women, we keep all our stress in our cores,” Garland said.

Garland said there are different types of pimps and different types of grooming in sex trafficking. For example, guerrilla pimps are often violent and beat and threaten their victims to keep them in line. Romeo pimps seduce young women and girls into believing they love them and that they are their “girlfriends.” They give victims jewelry and nice clothing, but they often get them hooked on drugs and exploit them.

Because of this, Garland said Phoenix Rising works to help victims gain better perspectives of love.

Daniel Gifford, also a board member of Phoenix Rising, said he believes pornography is a contributing factor to sex trafficking.

“I think the prevalence of pornography particularly is a huge precursor to a boom of human trafficking, and just in general, the sex industry,” Gifford said. “It’s toxic for our culture and dangerous, and I think research has shown that.”

According to Enough Is Enough, a website that advocates against internet pornography and online sexual predation, over $3,000 is spent on online pornography per second, and in an analysis of popular adult videos, 94 percent of aggressive acts were against women.

Gifford said he believes most viewers don’t realize the link between pornography and human trafficking.

“They don’t realize that they’re fueling it by watching it,” he said. “Actually, what they’re watching probably is trafficking without them knowing.”

Cunningham agreed with Gifford’s sentiments. She said she believes pornography objectifies women and girls, and said what’s happening behind the scenes, in many cases, can be human trafficking. She also believes the desensitization affects the way viewers perceive women and girls.

Cunningham said traffickers also pay attention to fetishes. They will make victims do whatever the popular demand may be, and they seek people out based on the demand. She said victims of sex trafficking who are actors in pornography are often forced to act like they enjoy the sexual acts; if they don’t, they are often subjected to violence.

Gifford said he believes pornography would be less prevalent if people were more aware of its connection to human trafficking.

He said prostitutes are often punished through the criminal justice system even though they are likely victims of sex trafficking, and sometimes traffickers go unnoticed.

“Instead of identifying them as victims, we identify them as almost part of the problem,” Gifford said. “Isn’t that crazy?”

Alternatively, Gifford said he believes there should be more focus on providing help to victims through rehabilitation, rescue, education and job training.

“It’s going to open up long-term opportunities to keep them from having to fall back in that path,” he said. 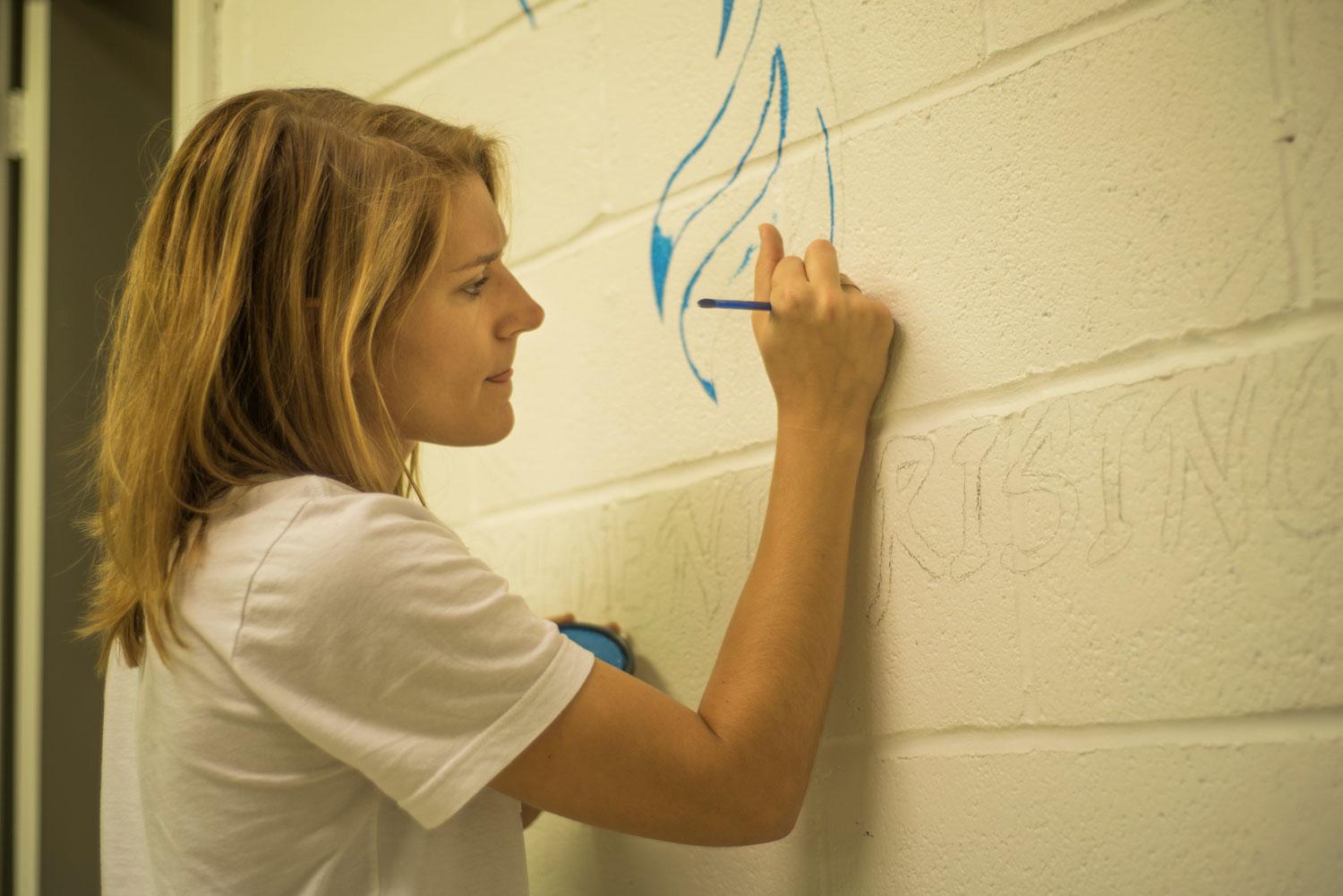 Morgan White finishes the logo for the new Phoenix Rising location. “My idea was for a Phoenix flying up out of the ashes being reborn in the sky,” Phoenix Rising founder and executive director Azurdee Garland said. She said this symbolizes Phoenix Rising’s efforts.

“To see her change in the time I’ve known her and her being able to strongly stand with her group of women that she now works with was incredible,” Garland said. “It’s just seeing that someone can go from completely broken to now helping others heal their own brokenness.”

Cunningham said she believes it is important to empower victims and give them a platform through which to express their voices.

At the opening of The House of Esther, Cunningham said she heard a story regarding recovery that left a strong impression: A speaker at a previous conference, also a therapist for human trafficking survivors, had described herself as the voice of the voiceless. Upon hearing this, a survivor spoke up and said she had her own voice — she didn’t need anyone to speak for her. 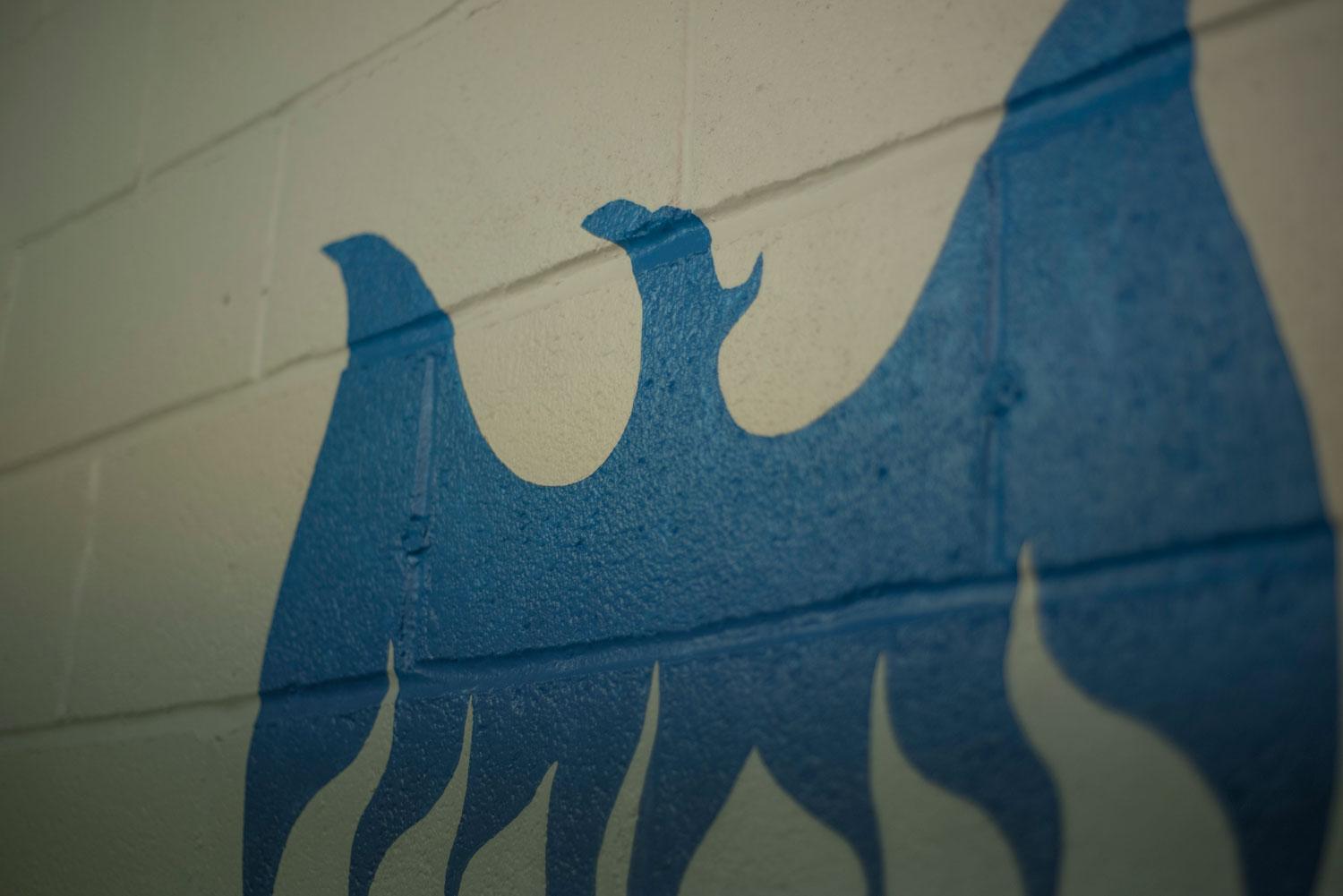 A phoenix rising from the ashes symbolizes Phoenix Rising’s efforts. Founder and executive director Azurdee Garland said the idea for the logo came about over 15 years ago. “I opted to freshen up the design when I changed to non-profit,” Garland said.