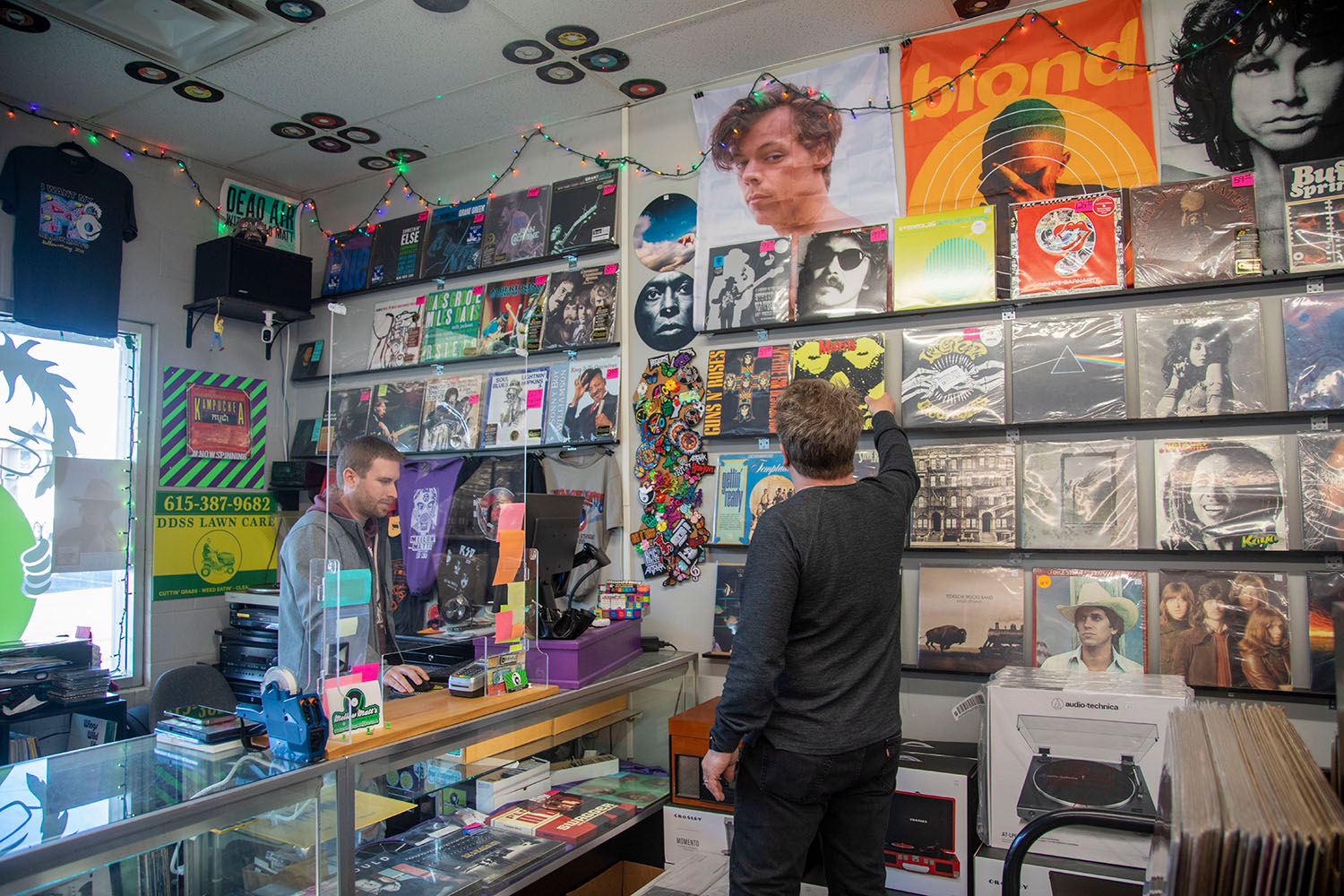 Matt Pfefferkorn displays his bestselling records on the wall near the front and back of his store. Decoration is a big part of Mellow Matts, from the ceiling hang decorative lights and records and along the walls hang vintage memorabilia and tapes. “The store creates an environment; it even smells good!” Pfesfferkorn says.

Dean Collier, who has been a performing musician for 33 years, said that Bowling Green has a great music scene because of the support it offers.

Justin Higdon is a member of the local rock/dance band SnO DAe. Higdon said that musicians rely on support from fans and patrons.

“Support is crucial in every aspect of what we do as musicians,” Higdon said. “Everything we do couldn’t be possible without support.”

Mellow Matt’s Music & More opened in 2013. Matt Pfefferkorn, the owner, said he had envisioned it’s existence long before it opened its doors.

Pfefferkorn also gives local bands the opportunity to play at events, such as the store’s outdoor Melloversery and Record Store Day.

Higdon said that it was SnO DAe’s first outdoor show and second live show together.

Pfefferkorn said he enjoys providing these opportunities to artists.

“We try to have an open door to anybody who’s in the local scene and wants to play here or wants to sell their releases,” Pfefferkorn said. “Anything we can do to help promote and just be part of it.”

Pfefferkorn said that artists can reach out through social media, call the store or stop by in person.

Collier has been a bassist and vocalist in several bands, including Marijuana Catfish, Tomatus, Farmer John & The Bad Seed, John King & The Mud River Revival and El Astronauta.

“What’s great about this Bowling Green community is everybody is here to help each other,”  Pfefferkorn said. “I’m just happy to be a part of it.”

According to their website, Tidball’s is a live music venue and “the center of the vibrant music scene in Bowling Green.”

Brian Jarvis, one of the owners, said that the bar has been open almost 20 years and has a history of being dependent on artists.

Collier said that one of his bands, Farmer John & The Bad Seed, was one of the first bands to play at Tidball’s.

“A club that supports local music, and original music at that, is practically unheard of anymore,” Collier said.

Collier said that Tidball’s could be compared to famous music clubs like CBGB.

“Whatever the list of important venues past and present, they better be on it,” Collier said.

Higdon said that Jarvis and John Tidball have supported him for 15 years.

“They gave me the shot on a stage and supported my musical passion,” Higdon said.

After Tidball’s became well-known, artists started reaching out to them, Jarvis said. He said it is surprising how many emails they receive from local, regional and even national artists.

“The music means so much to this community,” Jarvis said. “There’s no better evidence of that than inside these walls.”

Jarvis said that he has created bonds with the artists he meets and has learned that each musician stands out in their own way.

Marquee Backstage is another way the musicians of Bowling Green are not only supported, but recognized and given a spotlight.

Marquee Backstage is a regional music show that airs weekly on WNKY NBC 40 and WNKY CBS 40.

“Marquee Backstage supports artists by telling their life story, showcasing their powerful performances (and) promoting them to cities and states they may not yet have exposure,” said Julie Milam, Marquee Backstage’s host.

She has a natural connection with people, Milam said.

“They all have a story and I love to discover each and every one of them,” Milam said.

Higdon has worked with Marquee Backstage before but has yet to do so as a member of SnO DAe. Higdon said that he would love for SnO DAe to participate in the future.

“Julie Milam does a wonderful job bringing music to everyone and supporting local artists,” he said.

Milam said that the musicians who participate not only gain exposure, but an electronic press kit to share with venues, publicists and managers. This is all provided at no cost, Milam said.

Some musicians share positive social media posts, give Milam gifts or even write songs out of gratitude for their experience with Marquee Backstage, Milam said.

“The artists we’ve showcased share their gratitude and excitement in numerous ways,” Milam said. “It’s all meaningful, and it tells me we’re doing great things for incredibly talented people.”