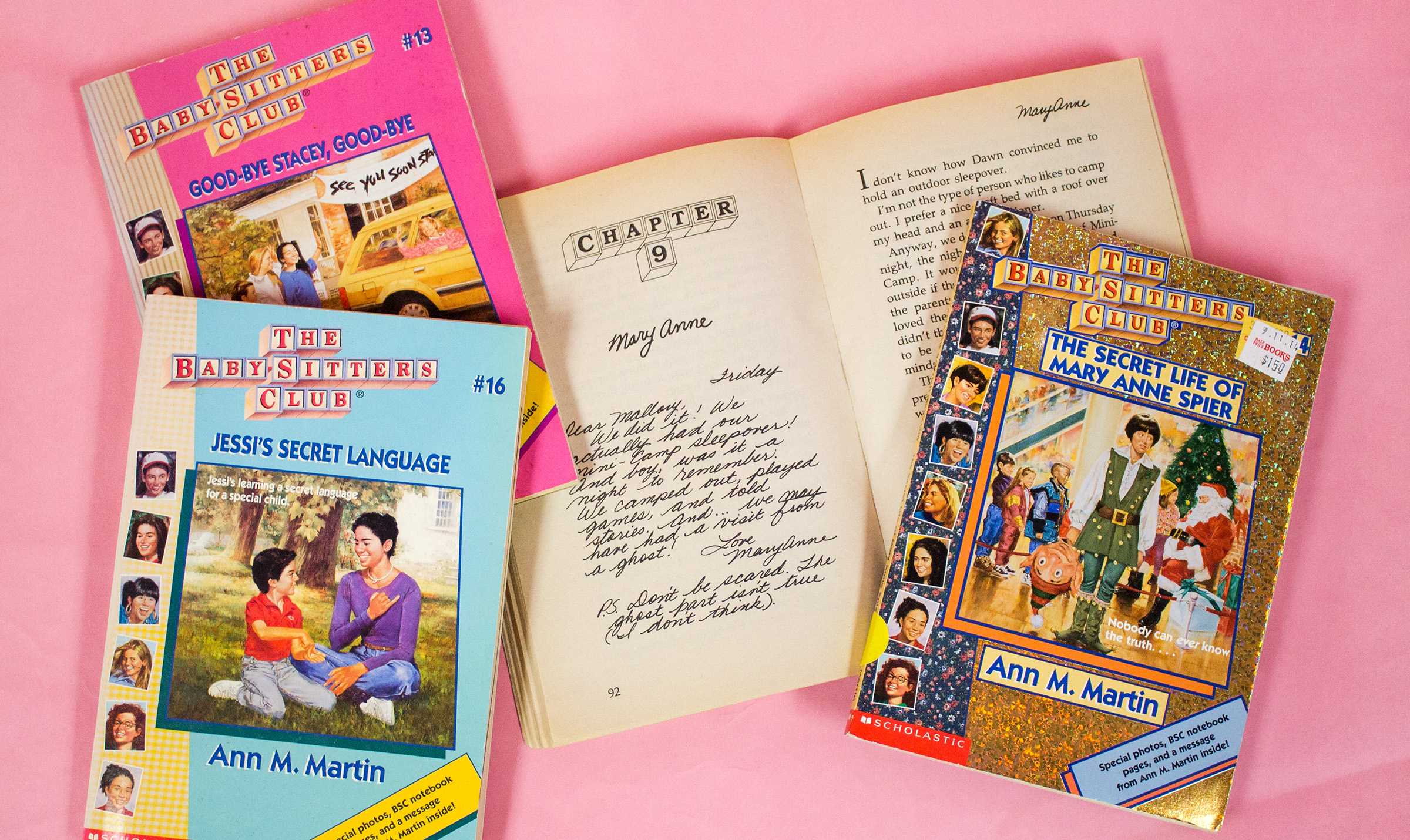 Like many young girls in America, I grew up reading Ann M. Martin’s iconic series, “The Baby-Sitters Club.” No other series was more formative in my early life.

The diverse main characters taught me so much about how I can be whatever kind of woman I want to be and that I can have deep, meaningful friendships with women who are different from myself. I say with no trace of irony or self-pity that those characters were some of my best friends growing up.

The series was published in the ’80s and ’90s — decades which, as everyone knows, were the peak of modern fashion. As such, each character in the series had her own unique look: Kristy was a tomboy; Mary Anne was modest and preppy; Claudia was a true fashionista and so on.

I myself have a pretty wide range in terms of my taste in fashion. Some days I look like your average sorority girl; some days I rock a jumper and turtleneck; other days I put on jeans and a t-shirt and call it a day. I do love fashion and frequently see outfits that look amazing, but I end up lacking the confidence to wear them out.

Late one Saturday night a few weeks ago, I started thinking about what to wear to church the next day. I put together an outfit that I thought seemed reminiscent of something Dawn Schafer, one of the BSC members, would wear.

Then it hit me: Wouldn’t it be fun if I tried to dress like a different member of the Baby-Sitters Club every day that week?

And so, much like I make every decision, I put very little thought into it and decided, “Yeah, let’s do it.”

1. I had to wear the outfit out in public for at least four hours.

2.The outfit did not have to be a modernization of a specific member’s style, nor did it have to be done specifically in the style of the ’80s or ’90s. As long as it was true to the spirit of the character’s style, it would work.

3. I would only be paying homage to the OG seven girls. No associate members (looking at you, Shannon Kilbourne and Logan Bruno) and no Abby Stevenson. Nothing personal, especially against Abby (I actually really love her, even though most BSC fans think her late-in-the-series introduction was unnecessary). My reasoning was pretty simple: there are seven days in a week and seven classic members.

So, without further ado, here is my journey.

So I’m on a weeklong mission to dress like a different member of The Baby-Sitters Club every day this week. Today’s look: Dawn Schafer pic.twitter.com/h5oG8xVL7o

Dawn is our effortlessly cool California girl. She makes her first appearance in book four, “Mary Anne Saves the Day.” Dawn is frequently described as wearing flowing clothes. For this outfit, I wore an Indian wrap skirt I got at the Bowling Green International festival, an olive green shirt and an oversized denim shirt on top.

I considered wearing my Birkenstocks, but it was cool that day, so I opted for some sandal flats that covered more of my feet. I accessorized with a couple of handmade bracelets and a brown choker. (Side note: I always wear a watch, so my brown watch makes an appearance in every single outfit, regardless of style). This outfit put me a little bit out of my comfort zone, but the longer I wore it, the more confident I felt.

Stacey McGill is a New York City transplant, which is only mentioned in like every single chapter of every single BSC novel. She’s been present since book one, “Kristy’s Great Idea,” and is characterized by her sophisticated sense of style. For Stacey, I decided to wear a chunky white turtleneck sweater, black jeggings, and caramel booties. I went all out and curled my hair and threw on some red lipstick, too. I kept accessories simple: just some silver and gold hoop earrings and a gold ring. I’ve worn outfits similar to this before, but wearing red lipstick to class was definitely intimidating though it ultimately gave me a huge confidence booster.

Day three: Mallory “I love horses and want to be a writer” Pike pic.twitter.com/6LzKYRiRjY

At age 11, Mallory is one of the youngest members of the BSC (most of the other members are 13). Her style was hard to pin down; she generally dresses simply and is characterized by her glasses and a deep desire to be an author. With that in mind, I decided to channel some serious English major vibes for Mal’s outfit. I wore my glasses, a rust-colored sweater, high-waisted jeans rolled up at the ankles, chunky socks and taupe shoes. I kept accessories to a minimal for Mal, since she is far too busy reading and writing stories about horses to accessorize.

Though Mary Anne’s sense of style isn’t the most exciting of all the BSC members, I was looking forward to this outfit a lot — partially because I love this dress and partially because Mary Anne was my favorite character growing up. She also makes her first appearance in book one, and in the beginning of the series, her father is extremely strict and she is often described as dressing preppy and modest to the point of childishness. As the series progresses, her father becomes less strict and she dresses with more freedom, but she’s still one of the most reserved BSC members.

For Mary Anne, I decided to wear a black and white striped turtleneck with my denim jumper and loafers. I admit, the half-up bun was probably a little too hip for Mary Anne, but since I worked a booth at the Potter College Fall Festival that day, the bun was mostly out of necessity. Besides, I like to think that Claudia, hip gal that she is, might introduce Mary Anne to a more stylish, yet still practical, hairdo.

Day five: the most fierce member of the BSC, Claudia Kishi pic.twitter.com/r73XJzKbH3

If Mary Anne is the most reserved BSC member, then Claudia Kishi is the least. She is the epitome of a fashion icon and her outfits are consistently described in great detail. She rocks bold outfits with confidence, and I was super excited to have fun with her style. When choosing my Claudia outfit, I looked through my closet and thought about outfits I’d always wanted to rock but was too self-conscious to wear.

I decided on this one: a long black dress layered over a white t-shirt tied at the waist with knockoff Birkenstock sandals and a red bandana. I was also pretty proud of my accessories: I paired some gold dangly earrings that are in the shape of Kentucky with a gold charm bracelet that has five different states dangling from it. This is an outfit I probably never would have worn to class or work if I hadn’t done this challenge, but I’m not going to lie, I felt so cool and confident in this getup.

In addition to Mallory, Jessi is the other sixth-grade member of the BSC. She is apparently the world’s most dedicated 11-year-old dancer, as she is almost always described as wearing a leotard as part of her ensemble. I took some dance classes sophomore year of college as part of my short-lived attempt at a minor in musical theatre, so my first attempt at a Jessi-inspired outfit included jeans, a leotard, and a cardigan. This outfit looked weird and was also uncomfortable.

I then decided to put this outfit together: an oversized sweater, black bralette, black leggings, and Converse. I deemed it plausible that Jessi would wear something like this to dance practice in colder weather. This outfit was definitely comfy, which was my goal since I had an 8:30 a.m. advising appointment that day.

Day seven: the one and only OG Kristy Thomas pic.twitter.com/O90qBVg6lm

At long last, we have Madame President herself, Kristy Thomas. Kristy is loud, bold and bossy, and I love her dearly. As a kid, I identified most with the bookish nature of Mary Anne, but as I grew up, I realized I’ve been a Kristy all along. She may be a sporty tomboy — and no one would ever describe me as either of those things — but her bold personality and leadership skills are things that we have in common.

For Kristy, I chose this red and white baseball tee (true fans of the BSC will recall that these are the colors of her baseball team, Kristy’s Krushers), ripped jeans, Converse, and a baseball hat. (Neither I nor Kristy are Dodgers fans, but this is a hat I found in the lost and found at the summer camp I worked at, so that’s what I was working with). I went to Nashville that day, and admittedly, I was a little insecure wearing such a casual outfit in such a hip city, but I actually ended up feeling really comfortable, and I channeled Kristy’s confident nature to complete the ensemble.

So, what did I learn from this experience? As cheesy as it sounds, this experiment that began as a spontaneous decision on a Saturday night transformed the way I think about fashion. Forcing myself to go outside my comfort zone gave me a lot of confidence. There’s no reason I should feel like I can’t rock a particular outfit just because it’s not something I normally wear. In the days since, I’ve continued to challenge myself to dress outside my comfort zone, and it’s been a lot of fun.

It’s funny: as a kid, the members of the BSC gave me the confidence to pursue my passions and unapologetically be myself, and as a young woman, they’re continuing to do the same. Though some of the fashion in the novels might be outdated, the overall message isn’t.

These characters are timeless, and I suspect they’ll continue to inspire me throughout the rest of my life — both in and out of the realm of fashion.