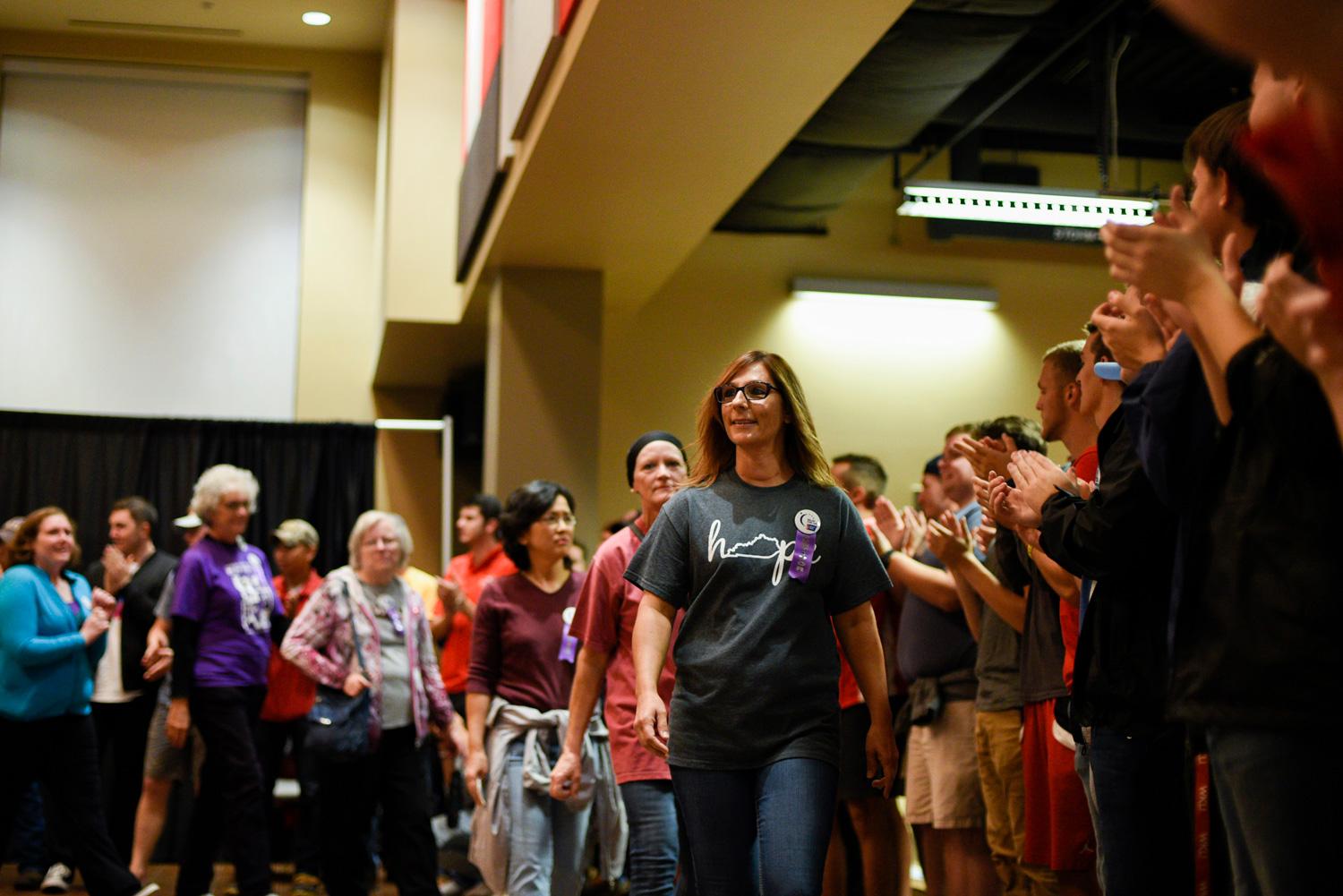 Kicking cancer out of the party

On Friday, Oct. 15, Give Cancer the Boot, WKU’s Relay for Life event, raised awareness and funds for the cause of “less cancer, more birthdays.”

It’s the thing everyone hopes will never come — the subject everyone whispers about like “Voldemort” or some other unholy creature, the unwelcome guest everyone prays stays away from the party.

A true villain, cancer welcomes itself into the lives of many, crashing parties and wrecking all the carefully placed decorations.

Danville junior Taylor Stewart knows this all too well. She has seen cancer up close several times.

“My dad is a cancer survivor,” Stewart said. “He was diagnosed when I was in the eighth grade. It really took a big toll on my family, but thankfully he’s still here, and he’s very healthy now.”

Her father’s battle first sparked her participation in Relay for Life events several years ago. But true to many tales, the villain showed up again, and Stewart’s experience with cancer did not end there.

“I had a really good friend who passed away from cancer this summer,” Stewart said. “He was a WKU student, and so I wanted to do something for him and something bigger than myself. So I got involved in this organization.”

To honor those who have died from cancer and to raise funds and awareness, WKU students, faculty, staff and friends came together to “Give Cancer the Boot” on Friday, Oct. 15. The WKU Relay for Life event, which took place in Downing Student Union’s Nite Class, gave the university’s slogan “life, more life” a new meaning.

The money raised from relay events like this go to the American Cancer Society. Owingsville senior Collin Ray said that the funds benefit various areas such as cancer research, paying medical expenses and/or transportation for cancer victims and even a 24/7 hotline that any family can call. Ray stressed the value of the hotline in particular.

“They can call and get information 24/7 about medical questions or even just any question that they have,” Ray said.

Although the event started with a somber beginning as some cancer survivors told their stories and many others were recognized, the overall atmosphere was vibrant. With bright colors and balloons decorating the room and several exciting games of corn-hole underway, the event felt like a celebration. However, for many, the subject is still one of very personal grief.

Stewart, who currently serves as the survivors chair on WKU’s Relay for Life executive committee, was certainly not the only one at the event who had watched a loved one suffer from cancer. She said Relay is a worthy cause because everyone at least knows of someone affected by cancer.

Brandenburg freshman Tyler Jackson was one such person. Jackson watched both his grandmother and great-grandmother battle breast cancer.

Although he faced the realities of cancer at a young age, Jackson counts himself lucky because both of his loved ones survived. He said he enjoys being a part of Relay for Life and meeting survivors, which provide a new perspective.

“It’s just amazing,” Jackson said. “If you meet a cancer survivor, you’ll never be the same. When you talk to them, their outlook on life is everything. Like, you might have a pessimistic view [but] then talk to them for five minutes and everything changes. You’re like ‘wow, I could conquer the world. I could climb Everest.’”

This renewed sense of perspective is also something co-chairs McKenzie Huskey, a Paducah junior, and Ray enjoy through Relay. Both Huskey and Ray have also had family members battle cancer. Huskey’s grandfather was recently diagnosed for the second time. Like Ray and many others, Huskey said she participates and raises awareness in her grandfather’s honor.

The two also each expressed the way Relay for Life events provide a sense of togetherness and understanding in times when cancer often causes feelings of isolation.

“I think Relay kind of gives the comfort that everyone is going through it because it’s not six people in there. It’s sixty, seventy, a hundred people that all have an attraction and a connection through cancer,” Ray said.

Give Cancer the Boot was an embodiment of that unity and connection. Each person in the crowded room that night represented a large number of people within WKU’s community that are connected by the illness, Ray said.

Stewart said that being able to recognize all of the WKU survivors that evening was one of her favorite experiences from her participation in Relay.

“That was absolutely incredible,” Stewart said. “All of the survivors here tonight were associated with WKU, whether they were students or staff or on faculty.”

Stewart added that meeting these survivors moved her to love and appreciate WKU even more with the knowledge that there are so many heroes who make up the campus community.

Despite the somber nature of the conversation about cancer, the ultimate focus, Jackson said, is on life — or rather, “more birthdays,” as Relay’s slogan states.

Correction: McKenzie Huskey was incorrectly identified at the time of publication. The Talisman editorial board regrets the error. It has been corrected.