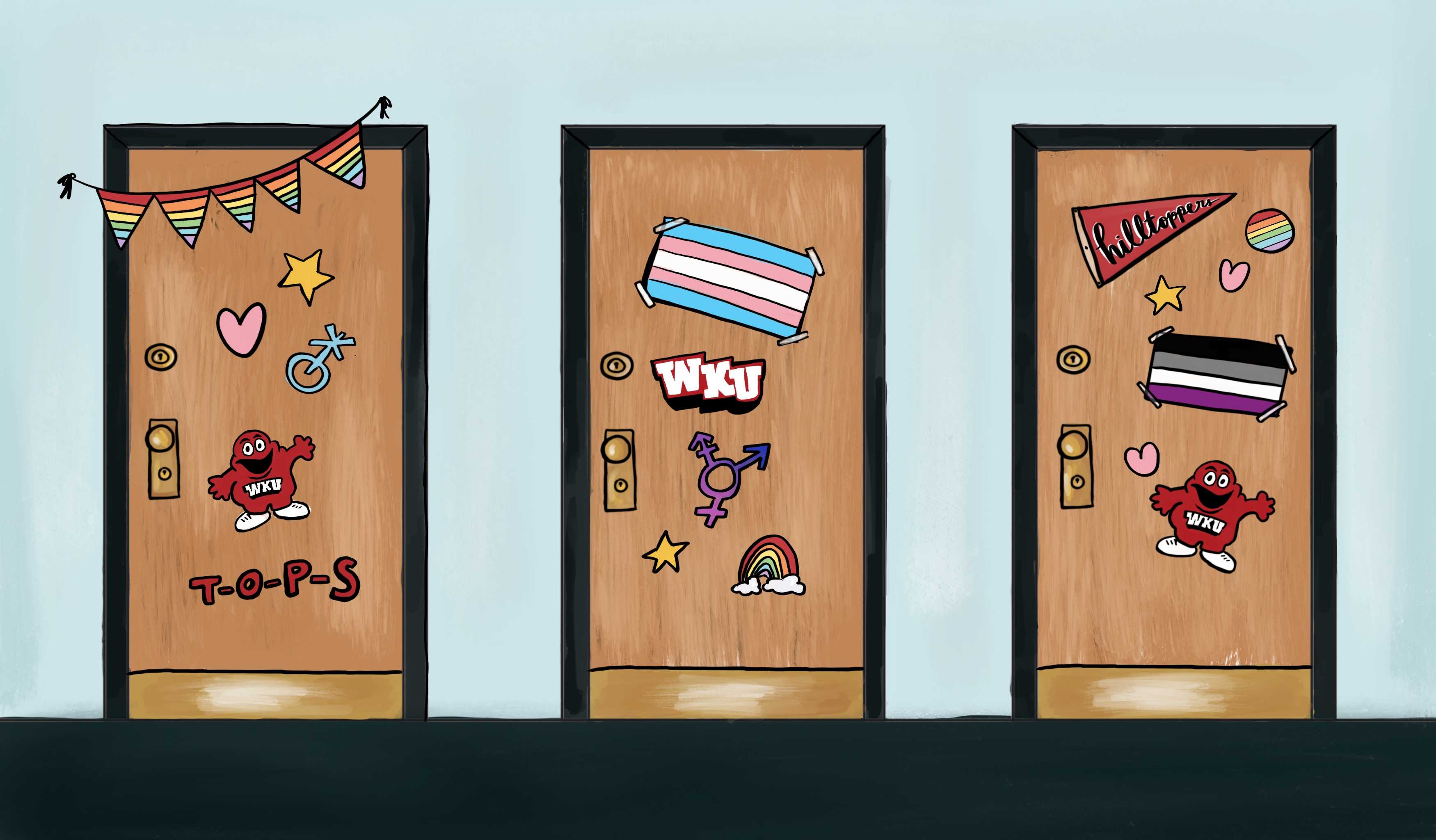 When Colby Wicker, a Fort Knox sophomore, came out to his mother as transgender last August, she kicked him out of her house and cut him off financially. The fall semester had not yet started, but left with no place to go, he returned to campus early. He contacted Natalie Smith, the coordinator of Bemis Lawrence Hall, and she allowed him to move into his new dorm early.

Because he was presenting as a female at the time, he moved into Bemis, a gender-segregated, all-female dorm, and was assigned a female roommate. He had short hair and dressed in masculine clothes, and he said many of the residents on his floor would stare at him in the hallway, whisper comments when he walked by or leave the bathroom when he entered.

“No one really respected me on that floor,” he said. “Having just been disowned, I felt like I deserved to be treated as I am.”

Wicker had also recently started hormone replacement therapy. He performed his testosterone self-injections in his dorm — his only private space — and sometimes had to do so in front of his roommate.

“It was really awkward for me to do my self-injections and explain that I’m actually a man to a floor full of girls who did not understand,” Wicker said.

In October of 2017, three months into his hormone replacement therapy, Wicker began to start passing as a man. As his body began to physically change, he felt increasingly unsafe and out of place in a female dorm and knew he had to move off campus. He found a house off campus and applied multiple times for an exemption to WKU’s required housing policy, but he said his request was denied.

According to the Housing and Residence Life webpage, status as an LGBT-identifying student is not listed as an exemption to the rule that requires all sophomores to live on campus.

Lana Kunkel, the associate director of housing operations at HRL, said the department rejects all housing requests based on race, sexual orientation or national origin because it would violate Title IX of the Educational Amendment of 1972.

“It ensures that no student is provided preferential treatment, nor discriminated against, with regard to being a student at WKU,” she said in a statement via email.

If a student is not granted an exemption, that student is required to pay the lowest residence hall rate offered, which was $2,180 per semester for the 2017-2018 school year. However, this rate will increase to $2,245 per semester this fall.

Wicker said he ultimately decided to pay the rest of his fall 2017 housing cost and move into a house off campus. Following several incidents in his new house, including one in which he said a roommate used several transgender slurs against him, he decided to move once again into a house with a few of his co-workers from the Home Depot. He said the financial fallout from these events contributed to his decision to take the spring semester off school in order to work.

However, trans and other queer-identifying students at WKU like Wicker will soon be given an opportunity to seek LGBT-friendly housing on campus. According to Kellsei Tate, a Housing and Residence Life staff member, an LGBT-centered housing community will be implemented on WKU’s campus this fall.

The community will be a living-learning community that will accept both LGBT-identifying students and allies, said Tate, the project’s leader and the residence hall director of Gilbert Hall. A living-learning community is a designated area of on-campus housing for students with something in common, whether academic or personal. Other communities, like the Potter College and Chinese Language Living-Learning Communities, have been established for years. Others like those for women in science and students of color were newly introduced last fall as part of President Caboni’s retention efforts.

“We’re trying to create this environment of living on campus and making it more than just a place to sleep,” Tate said. “We really want to focus on ‘this is your home and this is your family.’”

Campbellsville senior Jeremy McFarland,  the founder and lead organizer of the Transgender Non-Binary Student Group, said housing is one of the biggest issues for LGBT students on campus.

“Students, especially freshmen, are just going in blind, and that can be a really daunting experience, and it’s specifically why I didn’t want to live on campus,” McFarland said.

McFarland said these issues affect transgender and non-binary students in particular because they are often faced with choosing between gender-segregated dorms that may compromise their safety or conflict with their gender identity.

“I’ve heard a lot of students who are genuinely frightened about their housing circumstances, especially those who have had negative previous experiences,” McFarland said.

McFarland transferred to WKU as a junior after completing his associate degree at Elizabethtown Community and Technical College. He said he chose to find off-campus housing through a family member because he didn’t feel comfortable living in a dorm as a transgender student.

“I didn’t feel like living on campus was an option for me,” he said.

“LGBT youth need to be protected. They have to be. Because the suicide rate is too high. Those are children. They’re people like me.”

Now, in Wicker’s new house, all of his roommates are members of the LGBT community, including two other transgender men.

“I honestly just feel so blessed … to have people like me around me to support me and to just hang out with, just trans guys doing their thing,” he said. “We’re transitioning together. We’re existing together. It’s so wholesome. Like it literally has filled my heart.”

Wicker said though he still resents what happened to him, he’s happy and relieved that WKU is finally offering LGBT-inclusive housing.

“I hate that it took this long, but it’s a step in the right direction,” Wicker said. “With inclusive spaces such as these, it’s going to change lives for the better.”

Wicker said LGBT-inclusive housing on campus will make life-saving connections—like those he found living with other trans men—more expedient and accessible to incoming students.

“I’m proof that you can be trans and OK,” he said. “You’re going to find your people, and having this resource available to you — especially on campus — is going to be revolutionary.”

Wicker said providing safe housing for LGBT students is a serious matter, especially in light of the fact that suicide rates in the LGBT population are so high. Nearly half — 41 percent — of trans or gender-nonconforming people and 20 percent of lesbian, gay or bisexual individuals reported attempting suicide, according to a 2014 report by the University of California, Los Angeles, School of Law.

“LGBT youth need to be protected,” Wicker said. “They have to be. Because the suicide rate is too high. Those are children. They’re people like me.”

McFarland said ideally, LGBT-friendly housing would not be gender-segregated, have gender-inclusive bathrooms and be open during breaks to accommodate students who do not have safe places to go. While Tate said she is not sure which residence hall will house the community, it will likely encompass one floor and include resources like community spaces and gender-inclusive bathrooms.

As students are applying for housing for the upcoming fall semester, they are able to check a series of boxes to indicate which living-learning communities they are interested in. From there, HRL will conduct interviews to determine which students are a good fit for the community.

“We see the need for the importance of safety and having people on that floor that are actually dedicated to the mission and safety and empowerment of students within the LGBT community,” Tate said.

Krystin Hardin, a Morgantown sophomore and current RA in Gilbert Hall, has been chosen to be the RA for the new community. She said that as a member of the lesbian community herself, she sees the opportunity as a chance to learn more about others in the LGBT community.

“Within the LGBT community there’s still like a totem pole of oppression that depends on your race, religion, the way you’re treated differently,” Hardin said. “I feel like learning and meeting new people helps me better understand how to help them.”

She said she hopes the community will trigger broad policy change on the administrative level that reflects the inclusive sentiments of much of the student body.

“Policy-wise, we’re not really friendly to LGBT students,” Hardin said, noting that the Campus Pride Index, a resource from the nonprofit organization Campus Pride that assesses institutional LGBT-inclusion, gave WKU a rating of two out of five stars both overall and for housing accommodations.

Tate said she wasn’t “out” as a queer woman when she came to WKU to work and complete her master’s degree, but seeing undergraduate students living their lives “out and proud” inspired her to come out herself and eventually volunteer with the Queer Student Union. Now at the end of her second and final year of graduate school, she said she wants to be a role model for LGBT students and leave a platform for policy reform after she graduates.

“I’m about to leave, but I want to make sure that things are a bit better than when I came here,” Tate said.