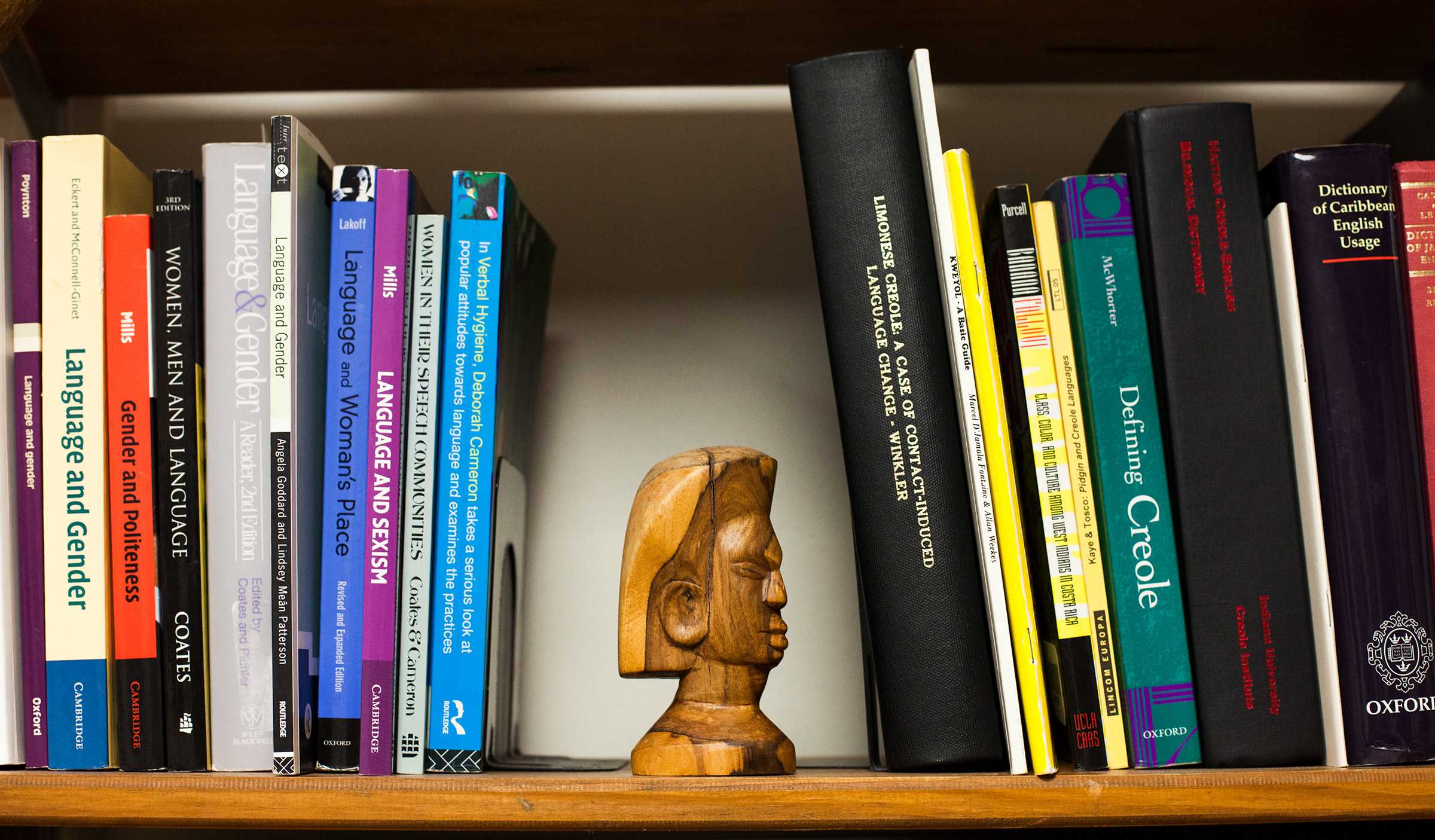 Go your own way: Linguistics students design their own major

Unlike many students, Macy Lethco knew exactly what she wanted to study before she got to college.

When Lethco, now a WKU alumna, first looked into attending WKU and learned that the university didn’t offer a linguistics major, she didn’t let that discourage her. Instead, she worked alongside English professor Elizabeth Winkler and the Mahurin Honors College staff to build a degree that led her to where she is today — teaching English in Spain.

“I was kind of ambitious leaving high school,” Letcho said. “I was like, ‘I know exactly what I want. I’m going to study linguistics.’ And I didn’t have a specific school that I wanted to go to, but my older sister went to Western, so I looked there.”

But, traditionally, WKU didn’t offer a linguistics major, only a minor. However, when Lethco met with Craig Cobane, executive director of the Honors College,she said he introduced her to something called an Honors Self-Designed Studies major and was quite enthusiastic about her being able to study what she wanted.

“This was a big reason I came to Western and was in the Honors College — because I knew it was possible to study linguistics,” Lethco said.

Put simply, linguistics is the science of language. The makeup of this science is rather interdisciplinary and covers several fields of study, which is why Lethco said it wasn’t too difficult to create the major.

Letcho was able to work on specific projects that interested her, like her research into what role linguistics plays in international music.

These self-designed majors have ranged from cyberterrorism to computer gaming and special effects. Linguistics is a recently designed major that first began with Lethco, but it has received a lot of interest and includes at least one other student, Elizabethtown junior Roy Williams, who is currently pursuing the degree.

“From what I can see, there are a lot of people who ask about it,” Keller said. “We have a lot of interest in it, but certainly not everybody who seems interested in it ends up doing it, just because of the legwork that goes into it upfront.”

Lethco corroborated this sentiment and said that because of the self-discipline and independent nature of this major, it might not be for everyone.

“There wasn’t a plan set out for me,” Lethco said. “I made it, but that was also challenging. Maybe not everyone would be able to do it.”

However, Lethco said the leeway that she had to design a major in linguistics made her college experience more enjoyable than what she heard from some of her peers.

“I never had the experience of my friends in college who were like, ‘Ugh, I have to take this required course that I hate,’” she said. “I chose all my courses, and even though they were challenging, none of them were boring.”

Williams, who is currently pursuing the linguistics degree, happened upon it by way of Lethco’s recommendation. He talked to her about the major after meeting at WKU’s Baptist Campus Ministry and said she spoke quite highly of it.

“She was graduating the year I began doing it, so she was kind of passing the torch,” Williams said.

Williams spent his whole first year at WKU undeclared before pursuing the Chinese Flagship program his second year, but he said that fell through.

“I kept wondering why is it that I cannot do well in a classroom with language,” he said. “Because I felt like I understood. I was doing okay, but I just felt like because all my language learning was relegated to that one classroom that it didn’t feel organic to me.”

This challenge led to his interest in the actual study of language, or linguistics. Now, his self-designed research revolves heavily around why university language classes don’t succeed and why people don’t move forward with language-learning at a higher rate.

“If your only motivation is to pass a class then you’re not going to really learn it,” Williams said. “Comprehension comes more from self-motivation.”

And sticking to the true flexibility and cross-disciplinary nature of linguistics, Williams has directed the focus of his major toward different topics than the ones initially laid out by Lethco — which was focused more on the psychological aspects of linguistics. He has studied the differences between dialects and language variations as well as sociolinguistics.

“The cool thing is seeing what her degree looked like because it is very different from mine,” Williams said. “They’re both very much expressions of our interests and our minds and the way they work.”

A key part of what makes these self-designed majors work, aside from the student’s motivation, is the role that the faculty advisers play.

“We’ve had some great faculty in Potter College of Arts and Letters with a background in linguistics that have done a great job working with Honors students over the years, so it doesn’t surprise me that linguistics is popular,” Keller said.

Professor Winkler, main adviser for linguistics major students and second reader for linguistics students working on their thesis papers, and professor Trini Stickle of WKU’s English department are a couple of the faculty members that Keller referenced.

Although technically English professors, both Winkler and Stickle are self-professed linguists whose research reflects that title. Winklers research is in West African language and Stickle’s is in communication disorders,

Winkler, who was in touch with Lethco before she even began her WKU education, said guiding these linguistics students gets her back to her linguistics roots.

“I get to actually do theoretical linguistics with them — I get to do real research,” Winkler said. “So, for me it satisfies some of what’s missing when you teach in a place that doesn’t have a linguistics program.”

Winkler is currently working with people of Liberia to create a dictionary for their native language, Kpelle (pronounced PEL-LAY), that will help them establish a written language and literacy. This is an extension of research she has been involved in since her years as a graduate student at Indiana University in the ’90s.

“I’ve had zero regrets doing this,” Winkler said. “None of them have failed to do anything but impress me.”

Williams said when he first took Winkler’s introduction to linguistics course he was overwhelmed by how much he enjoyed it, and he has enjoyed her help and guidance with his research.

“It’s really an amazing experience to have someone as a teacher/mentor who has such great experience in the field you want to be in,” Williams said.

Stickle, who was brought on as a second reader to Lethco’s thesis project, joined Winkler in fall 2016. With a background in teaching ESL and linguistic studies, she said the whole process has been wonderful for her as a teacher.

“The students who pursue this are passionate about what they’re studying, and that makes all the difference,” Stickle said.

With one student graduated, another working toward the degree and others looking into it, this Honors College self-designed linguistics major has picked up speed. But it isn’t likely that WKU will be adding a traditional track for a linguistics major anytime soon, Professor Winkler said.

“I see individual students working through the honors department continuing to do this,” Winkler said. “It will be self-motivated. The state keeps cutting appropriations. There’s no money. There’s absolutely no money for anything new.”

But Lethco and Williams don’t seem to mind the lack of a structured major. Both students highlighted the flexibility that comes with the self-designed major as one of the biggest benefits.

“One thing about my personality is that I really hate restrictions and rules,” Lethco said. “I can handle them, but I just love the independence and flexibility of making my own rules, so this was a really attractive option for me.”

“I would almost prefer that it stay as a a [self-designed] studies major because then you can tailor it to things that are interesting to you, and I think that’s the whole point,” Williams said.

But, Williams said that he hopes in the future more students express interest in this major and studying linguistics because he would like to work collaboratively with them.

“I think more people need to know that this option exists,” he said. “It’s really great.”