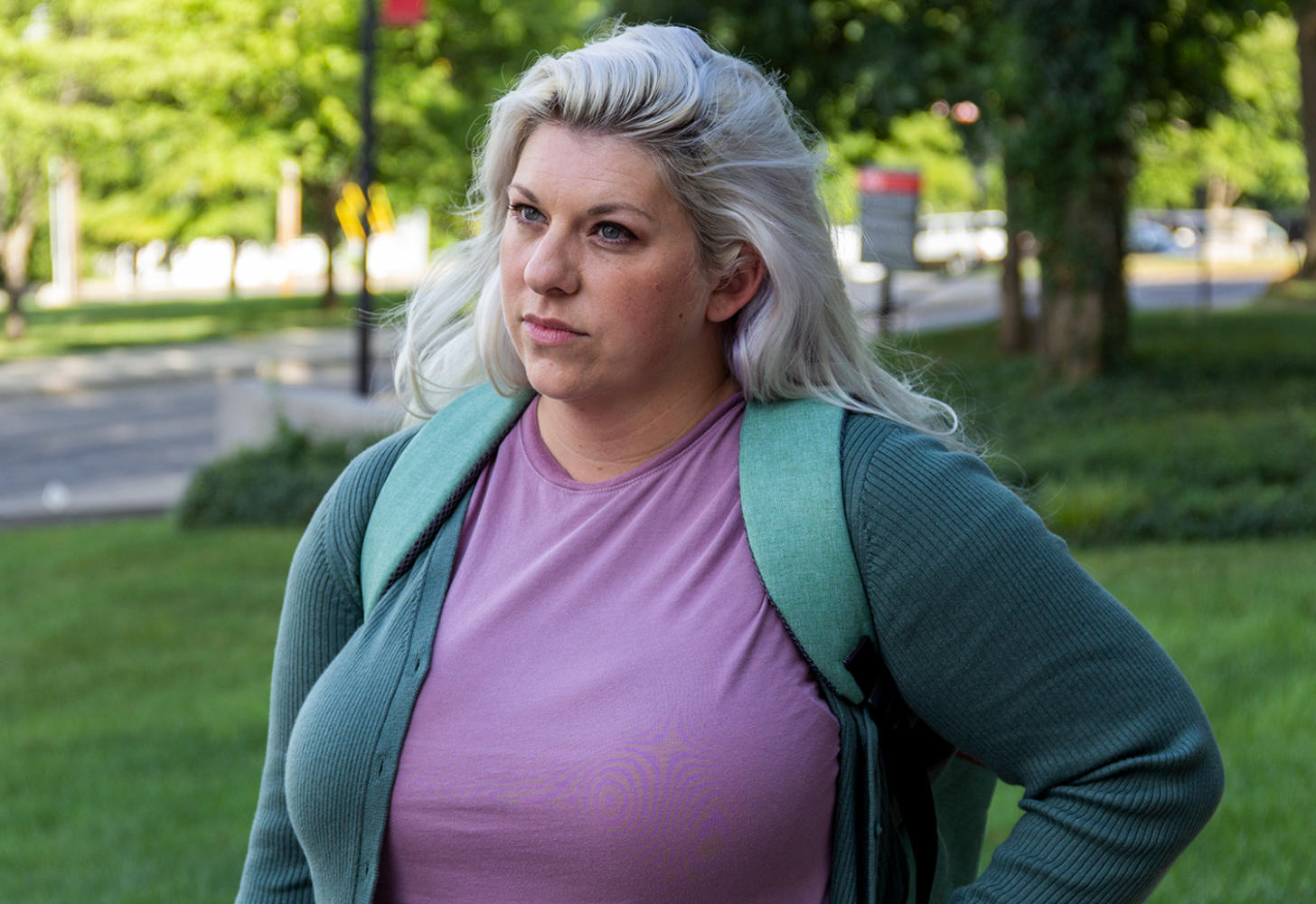 Cox looks serious as she talks about encouraging others to not be afraid to take untraditional paths on Wednesday, Sept. 14, 2022. (Photos by Andrea Florence)

Everybody who goes to WKU has a different story, and 9.8% of the fall 2021 student population is made up of non-traditional students, according to the 2022 WKU Fact Book.

The National Center for Education Statistics defines a traditional student as  “one who earns a high school diploma, enrolls full-time immediately after finishing high school, depends on parents for financial support, and either does not work during the school year or works part-time.” A nontraditional student is anyone who does not fit that definition.

Owensboro senior Kayla Cox, 35, said she is graduating this December with a bachelor’s in fine arts in theater. Cox said she commutes from home, where she lives with her two children.

“I was really scared to come back to college as an adult, but it really hasn’t been weird,” she said. “Everybody’s super accepting.”

Cox previously completed two years of college after high school, and she said this is her fifth semester at WKU.

Cox spent time doing community theater and working at a shoe store, until her divorce led her to reconsider college. She said she did not originally pursue theater for religious reasons.

“I feel like I have lived completely different lives because before, I was like, ‘I can’t work in theater because that’s selfish.’ My family was very religious and they told me if I didn’t use my gifts to glorify God, I was sinning,” Cox said.

She said her original goal was to be a worship leader, but after years passed, she said she decided to own who she was.

“I grew up and found out who I am and owned it and decided I’m going to do what makes me happy,” Cox said.

Cox started online classes at WKU in fall of 2020 and began on-campus classes the next semester. Her first semester, she tried to work full-time as well, but it was difficult to manage.

“I couldn’t be a full-time parent and a full-time student and work full-time, so I quit my job and that has created a good balance,” Cox said. “I take care of my kids and then I don’t sleep so I can do homework and be in shows.”

Cox said she will be playing Ares in WKU’s production of “The Lightning Thief: The Percy Jackson Musical” this fall.

Cox said that the years away from school have made her more mature.

Cox said she is glad she went back to school after taking some time away and wants to continue her education and get a master’s degree to teach high school theater.

“I really want to tell my story because I want other people to realize it’s okay to not have the traditional path,” Cox said. “As long as you’re making your path, that’s what’s important.”

There are different types of non-traditional students.

Owensboro freshman Evan Medley, 18, attended Owensboro Community and Technical College while still a student at Owensboro High School. He entered WKU with associate degrees in arts and science. Medley said he is studying biology and Chinese as part of WKU’s Chinese Flagship program and hopes to become a military doctor and politician.

“One of my dreams is to become a politician and reaching out to 1.8 billion people is definitely a very good tool to have,” Medley said.

Medley said there were some challenges of going to college while still in high school.

“I didn’t have my driver’s license,” Medley said. “I couldn’t get to one of my classes, unfortunately. So, I had to take it online, and it was a chemistry class.”

He said that class was the only B he ever received.

Medley said he is engaged and has a 2-month-old son. Medley said he missed his son’s first time rolling over and that the separation is difficult.

“Hopefully I’ll be around when he starts to crawl and walk,” Medley said. “I’m sure what I’m doing now will definitely help me and him both long term rather than if I didn’t go to college.”

Medley, a student in the Mahurin Honors College, said he wants to become involved in student government. Medley would also like to start a 3D printer club because he has one in his dorm.

Bowling Green junior Madison Heckman, 29, said she is a creative writing major with a minor in film. She attended WKU in 2011, originally studying psychology to work in prisons.

“I realized quickly that I didn’t have the confidence or the skill set or the self-discipline to really succeed in school the way that I could later,” she said.

Heckman left school and moved to Louisville, where she held a full-time job selling health insurance and working in marketing before returning to WKU.

“My mom died in 2019 and I reprioritized,” Heckman said. “It was time to stop settling.”

“I’ve achieved goals that I didn’t think were possible when I was 18,” Heckman said. “I’ve worked hard, I’ve bought a house, I’ve done these things that seemed impossible, so going back to school felt more possible because I’ve had that experience under my belt.”

Heckman said she wants to be a creative writing professor. She said she would like to get a master’s degree from WKU. She said that she is currently taking extra classes to get as much experience as she can.

“I’m far more concerned with the number of skills I can gain in undergrad than finishing quickly,” Heckman said. “At 29, you’re so much less worried about finishing quickly because it’s too late. I’m not getting out of here by the time I’m 21. That can’t happen. So, I might as well do it correctly and do it thoroughly and try to soak up as much as I can.”

Heckman said she feels much more comfortable in her classes and does not compare herself to other students as much as she used to. She said after returning to college, she learned that she still has weaknesses.