The national Pacemakers are considered the Pulitzer Prizes of collegiate journalism and are awarded annually at the convention co-hosted by the Associated Collegiate Press and College Media Association. About 2,500 student journalists from across the country attended the convention. 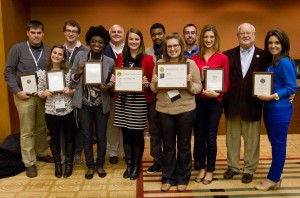 WKU was the only university to take home national Pacemakers in both newspaper and yearbook categories.

The Herald Spring 2012 Editorial Board was awarded second place in the ACP Editorial and Opinion Category.

Alex Weires, a graduate from LaGrange, received honorable mention in the ACP House Ad Category and the Brochure and Rate Card Category.

On Sunday (Nov. 4), The 2012 Talisman was awarded fifth place in the National College Media Convention Best of Show Competition.