How we got here: Understanding the SGA election controversy

It’s been a few days since the results of the SGA elections were announced, and the dust has nearly settled from the election’s numerous controversies.

Even so, there’s still confusion surrounding the election, primarily regarding the temporary disqualification of one ticket of candidates: Stephen Mayer, Garrett Edmonds and Harper Anderson, also known as the MEA ticket.

In an effort to better understand the series of events that led us here, we went back and identified key moments from the election and ensuing controversy. The timeline below tracks and explains those events.

Note: Some times are approximations based on timestamps on live Tweets from the Herald and SGA Twitter accounts.

Annalicia Carlson, Chief Justice of the SGA Judicial Council, received a message from the SGA contact form in which an anonymous student complained about the use of the “Pepe the Frog” meme in two separate campaign chalkings by the campaigns of the MEA ticket and Anna McAvoy, a sophomore running for junior senate. Carlson said the MEA chalking was located between Bates Runner Hall and Downing Student Union and portrayed the meme with a word bubble that read “MEA for SGA,” the campaign’s slogan. Carlson did not know where the McAvoy campaign’s chalking was located. 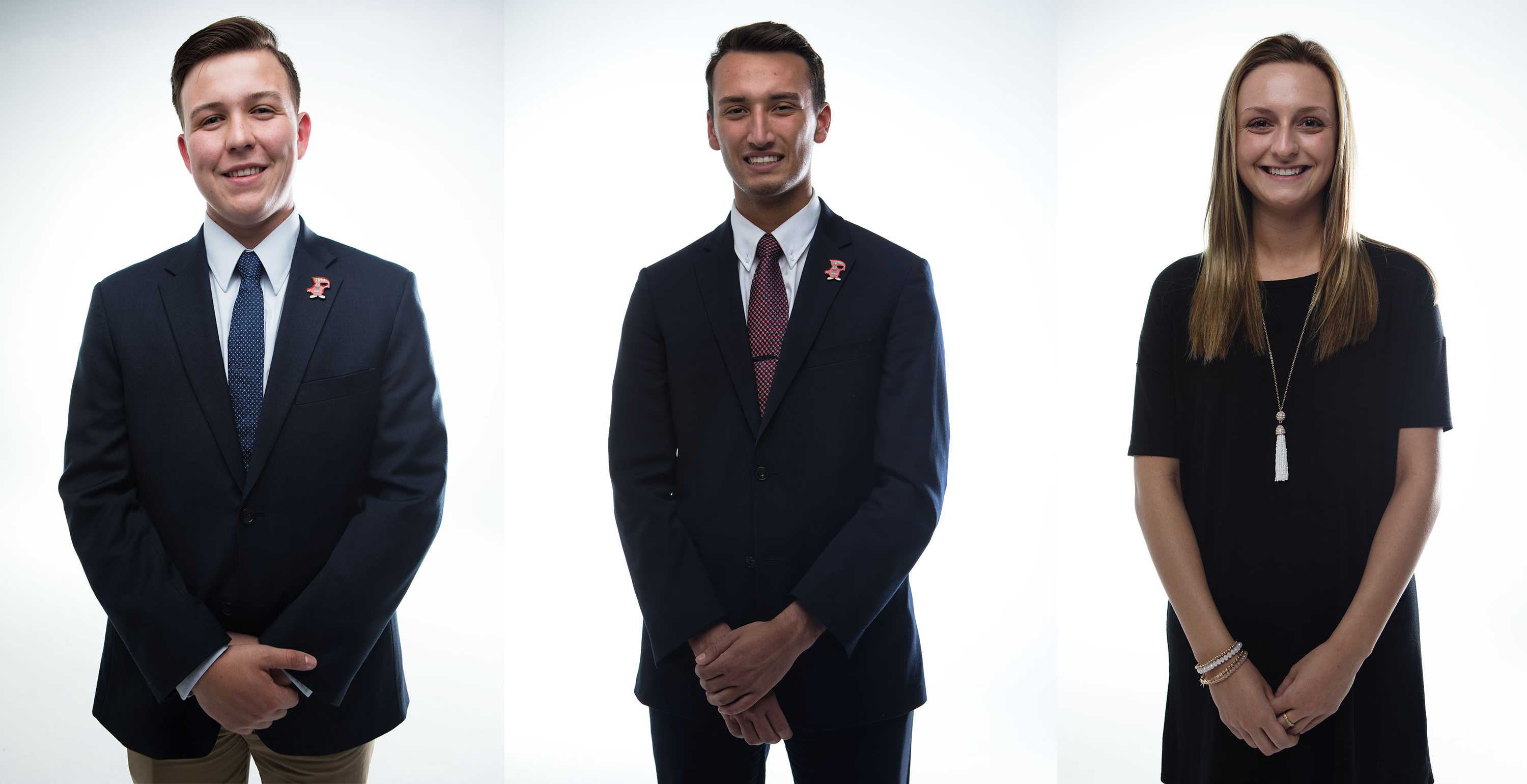 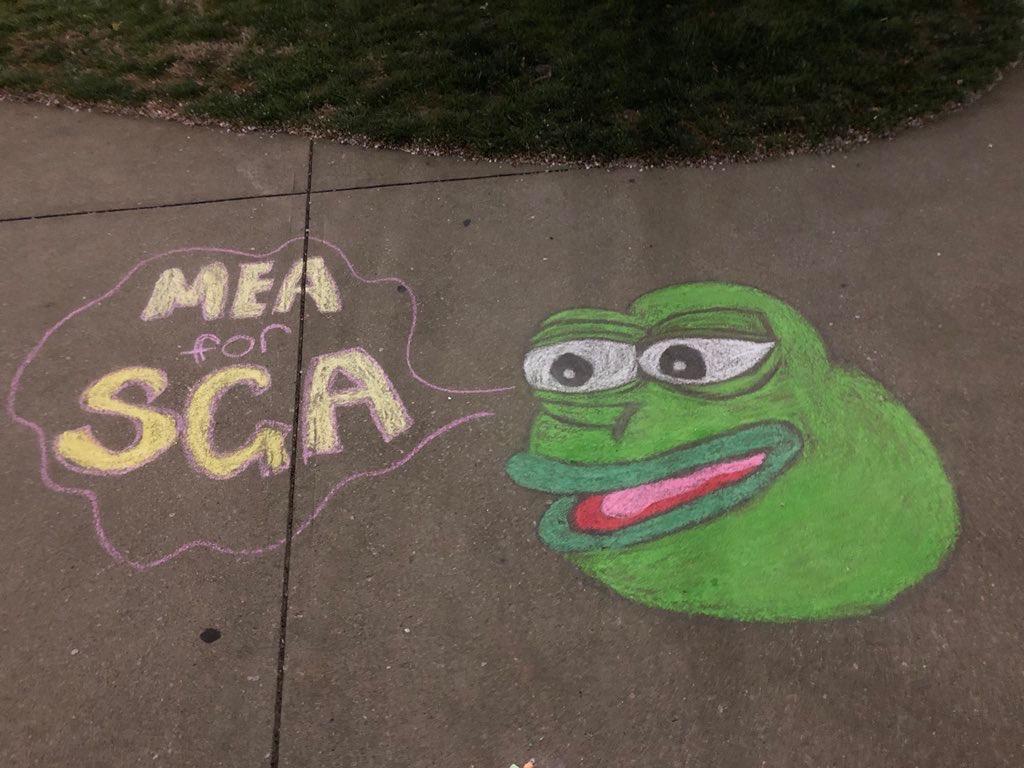 The anonymous complaint cited two links from the Anti-Defamation League, a nonprofit organization that tracks hate groups and hate crimes, which identified the meme as a “general hate symbol.” The complainant called for “appropriate, affirmative and punitive action” against the responsible parties, Carlson said, quoting the complaint.

In its webpage about the meme, the ADL notes that use of the meme must be analyzed in context because many Pepe the Frog memes are not bigoted in nature.

“The mere fact of posting a Pepe meme does not mean that someone is racist or white supremacist,” the organization’s website states. “However, if the meme itself is racist or anti-Semitic in nature, or if it appears in a context containing bigoted or offensive language or symbols, then it may have been used for hateful purposes.”

Carlson said the Pepe chalkings were part of a larger campaign of images by the MEA campaign, which used memes to promote the candidates. These included the “Walmart yodel boy” and the red balloon from the movie “It.”

Professor Mac McKerral is the journalism major coordinator and a professor who teaches classes on press law and ethics. He said via email that the wording of the clause that disqualified the campaign was overly broad and therefore infringed on free speech.

“It leaves deeming what is ‘inappropriate’ and campaign strategies, or chalk images, in the hands of a small number of  officials, so in essence it allows these people to ‘license’ speech and expression, which under federal law is unconstitutional,” McKerral said.

What is the judicial council?

The judicial council is the judicial branch of the SGA. It’s comprised of seven justices, including a chief justice, an associate chief justice and five associate justices. These positions are appointed by the current SGA president and serve for as long as they are students at WKU or until they resign. Duties of the Judicial Council include creating and supervising election procedures.

Conditions in Bowling Green were rainy with thunderstorms that washed away both the McAvoy and MEA campaign chalkings. More than an inch and a half of rain fell in Bowling Green over the course of Saturday and Sunday, according to the National Weather Service.

The SGA election ballot opened for voting on TopNet.

The Judicial Council called to order an emergency meeting in which they discussed the complaint filed Friday. The council determined that the members of the MEA ticket would be disqualified from the SGA race, including senator positions. McAvoy was also disqualified.

In an interview, Carlson said the council did not vote to suspend the campaign because they believed any of its members were racist, sexist, homophobic or otherwise prejudiced. Rather, she said, the Judicial Council made its decision after it determined that Edmonds chose not to remove the symbol after being alerted to its racist connotations.

Why is the Pepe meme considered by some to be a hate symbol?

In September 2016, the Anti-Defamation League added the Pepe the Frog meme to its online hate symbols database. The cartoon frog was created in 2005 by comic Matt Furie and came to be used as a reaction meme on online platforms such as 4chan, as well as Twitter and other platforms

The meme began to be co-opted by white supremacist and alt-right circles throughout 2015 leading up to the 2016 presidential election, according to a May 26, 2016 Daily Beast article. In the September 2016 announcement of the decision, the ADL’s CEO Jonathan A. Greenblatt said though the meme does not have racist origins, it can be classified as a hate symbol because it had been co-opted by racist social media users to “harass and spread hatred on social media.” Uses of the meme in this way include the use of swastikas, Hitler mustaches, Ku Klux Klan hoods, references to killing Jews and racist slurs.

Conservative trolls are recreating the Pepe meme as racist with offensive images like this: https://t.co/B4VpHW0N3r pic.twitter.com/927TmWcq72

At the same meeting, sophomore Kenan Mujkanovic, who was running for president on a solo ticket, was suspended for distributing perishable food items within 48 hours of the election period after it was determined that he delivered pizza to a fraternity house during that period. This meant that he was still eligible to win but was not allowed to campaign.

The MEA ticket posted on their Instagram page that the SGA judicial council had decided to disqualify their campaign because of their use of a Pepe the Frog meme. The post was met with backlash on social media.

SGA began its regularly scheduled, weekly meeting. The senate unanimously voted to move public comments to the beginning of the meeting, with each speaker’s time limited to five minutes, rather than the usual 10. According to a tweet from Herald reporter Nicole Ziege, the student section exceeded capacity. Nearly 30 students spoke during the comment section, including opinions for and against the Judicial Council’s decision.

In an April 18 article, the Herald reported that one of the speakers was Jewish student Spencer Wells who said he saw the meme used by white nationalists on August 11, 2017, at the alt-right rally in Charlottesville, Virginia, in which a counter-protester was killed by a vehicle ramming into the crowd.

“That image is a symbol of terror for a lot of people,” Wells said.

Candidates Mayer, Edmonds and McAvoy also apologized during the meeting, according to the Herald.

“I’m sorry for the ones I have offended, but I’m also sorry for the voices that have been silenced because of my actions,” Edmonds said.

The Judicial Council voted to suspend, but not disqualify, the MEA ticket as well as McAvoy. This meant that all candidates were still eligible to win but were not allowed to campaign.

The SGA Twitter account tweeted out the official results of the election, which showed that Stephen Mayer won the presidential election by 37 votes. The rest of his ticket also won executive positions, with Garrett Edmonds as the new executive vice president and Harper Anderson as the new administrative vice president. McAvoy won a senator-at-large seat.

These events exacerbated already-high tensions in SGA. The Herald first reported on these growing tensions in a March 26 article in which current president Andi Dahmer said “this year has become almost toxic in nature.”

In a March 28 meeting, Senator Dallas McKinney spoke against funding for the Lavender Recognition Ceremony, a graduation ceremony that honors LGBT students. According to a March 28 Herald article, McKinney read “several Bible verses from the book of Romans” in explaining his opposition to funding the ceremony. The following week, several students and senators including Diversity and Inclusion Committee Chair Mark Clark spoke against McKinney’s comments, according to an April 3 Herald article.

“I agree that everyone is allowed to have their own beliefs, faiths and values,” Clark said. “However, your beliefs should not be used as an excuse to discriminate against anyone.”

Following the election events and backlash directed at the SGA for the Judicial Council’s disqualification of the MEA ticket, Carlson said she believes the council did what was necessary.

“I am proud of the work this council put into the spring 2018 election, she said. I have no doubt all justices voted unbiasedly, took in all facts and voted in the way they thought necessary to benefit this university.”