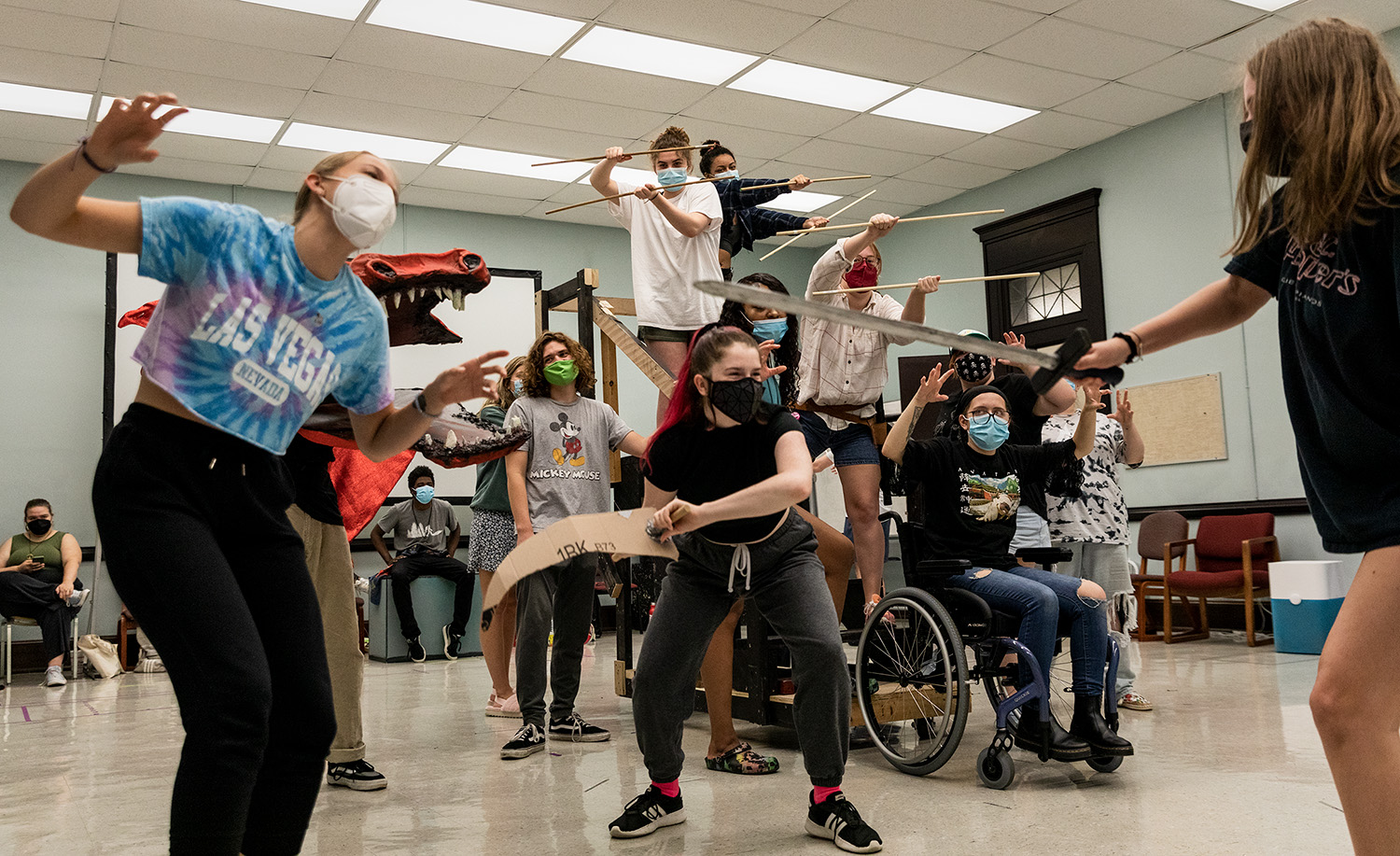 The cast of “She Kills Monsters” rehearsed on Friday, Sept. 16. Many fight scenes will take place within the play, making rehearsal an important part of its production. (Photos by Rhiannon Johnston)

“She Kills Monsters”: A look into the recycled set

WKU’s production of “She Kills Monsters” will open on Friday, September 23 but with a twist: the set is primarily made out of recycled materials.

Mary Kay Samouce, professional-in-residency set designer, said the wood being used are all pieces that have been repurposed from previous productions.

“We always use recycled wood,” Samouce said. “When we buy lumber for a show, and when the show is over, we strike (disassemble) the show and reclaim all of the wood that is usable and put it into the next show.”

“She Kills Monsters” was originally by American playwright and screenwriter Qui Nguyen in 2011 and takes place in Ohio, 1995.

The play is centered around Agnes, an average high school teacher who is struggling with the death of her younger sister Tilly.

Throughout the play, Agnes is able to relate to her late sister by playing D&D. The play balances the portrayal of D&D monsters and fight scenes with difficult topics such as grief, homophobia and family connections.

Samouce said that since the majority of the play takes place in one setting, she wanted to embrace the nostalgic 90’s vibe as much as possible.

She described the show’s production setting as a “warehouse turned hip-hop pop club” and said that the set needed an industrial feel.

“So then it was my job to start to do the research and find the images that fit the vibe,”  Samouce said.

Technical Director Austin Elledge said that many of the aesthetic decorations were also recycled.

He said pieces like wiring, pipes, circuit systems and an old air conditioning system from one of the buildings were recovered over the summer.

Samouce said that while “She Kills Monsters” is a fairly new play, she feels it’s important for theater moving forward.

“Well, I think this particular production is really exercising the muscle of innovation like nobody’s business,” Samouce said. “I think it’s going to be very different.”

Jorah Graham, a senior from Clarksville, Tennessee, is playing Tilly. She said that the plot of the play means a lot to her as well.

Graham is the oldest sister in her family, and her younger sisters still live at home. She said she was able to put herself in the mindset of her sisters to play Tilly.

“I used that mindset of almost, like, people have moved on without me,” Graham said. “And I took my own thoughts and feelings of being separated from my family and channeled that into the role of Tilly.”

The play takes place about a year after Tilly’s death when Agnes is cleaning out her room and finds the D&D manual. From then, Graham said that Agnes decided to play the game and is able to see the world from her sister’s point of view.

The role of Agnes went to Florence senior Emma McGee, who also said that she feels connected to her character.

She said that throughout “She Kills Monsters”, Agnes discovers that people — including her sister — are drawn to D&D as an escape. The play addresses Tilly’s exploration within her sexuality and the homophobia she experiences because of that. While playing D&D, Agnes realizes that the game was Tilly’s escape from that hostility.

“Theater, for me, has been that escape and that opportunity to be someone completely different,” McGee said.

McGee said that while this show doesn’t take itself seriously like Shakespeare, it’s still intense and dramatic and offers a space for queerness to exist.

“The media we consume needs to have casual portrayals of queerness, and I think this show offers that,” McGee said.