Adam Murphy enjoys pairing his outfits with different colors, “I am color- blind but I enjoy fashion so I‘ll always ask a friend if my outfit matches with the colors i’ve picked out,” said Murphy.

WKU’s campus is a melting pot of trends, filled with many different students and personal styles. The Talisman rounded up five students on campus to showcase their individuality and self expression through style. 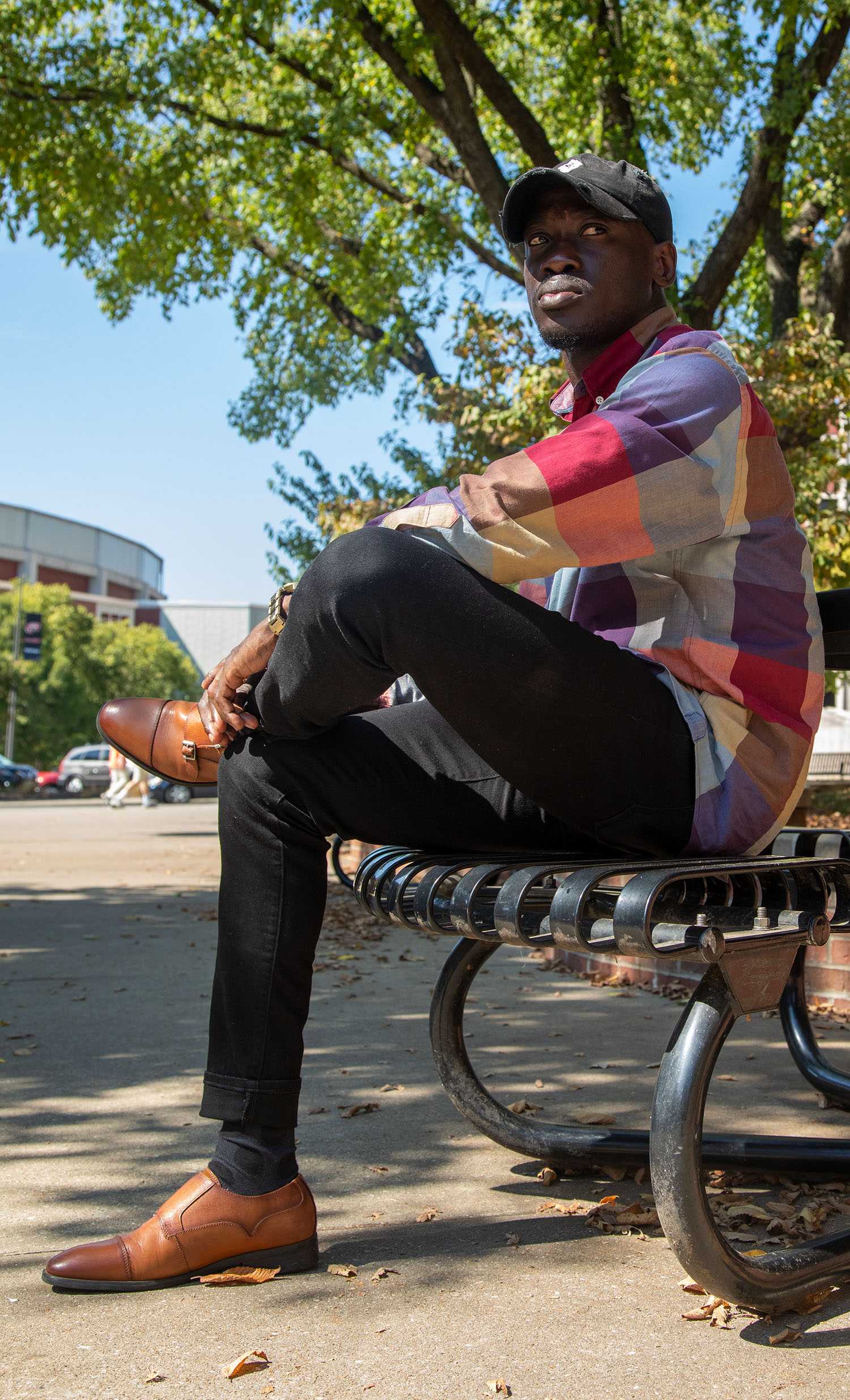 New York sophomore Keith Adu Boahene hangs out on campus outside Downing Student Union. “Fall is my favorite season, so more looks are coming,” he said. (Photo by Rhyne Newton) 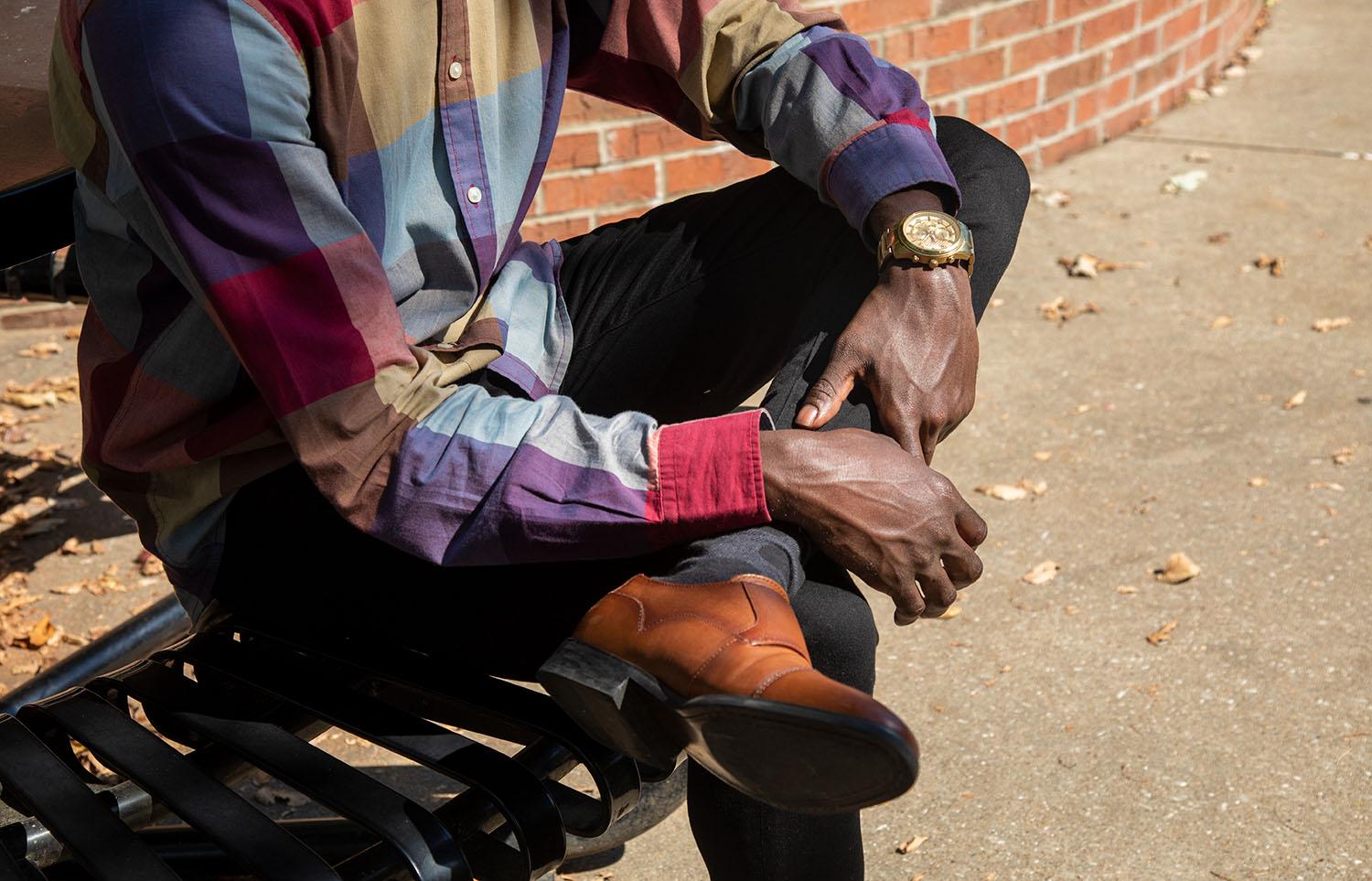 Keith Adu Boahene makes a point to be comfortable while showing off his style. (Photo by Rhyne Newton)

A sophomore from New York City, Keith Adu Boahene dresses in whatever fits — his mood, that is.

He said when he wakes up, he has a certain vibe in his head.

“Whatever vibe I go with is the vibe I dress up like,” he said.

His top fashion tip is to always be comfortable, although his balance of comfort and style has matured over time. He used to consider gray sweatpants to be dress clothes.

“Honestly, my mom forced me to dress better,” he said. “My mom would whoop my ass for the whole day.”

Because fall is his favorite fashion season and boat shoes are his staple, keep an out for this film major’s upcoming looks on the Hill. 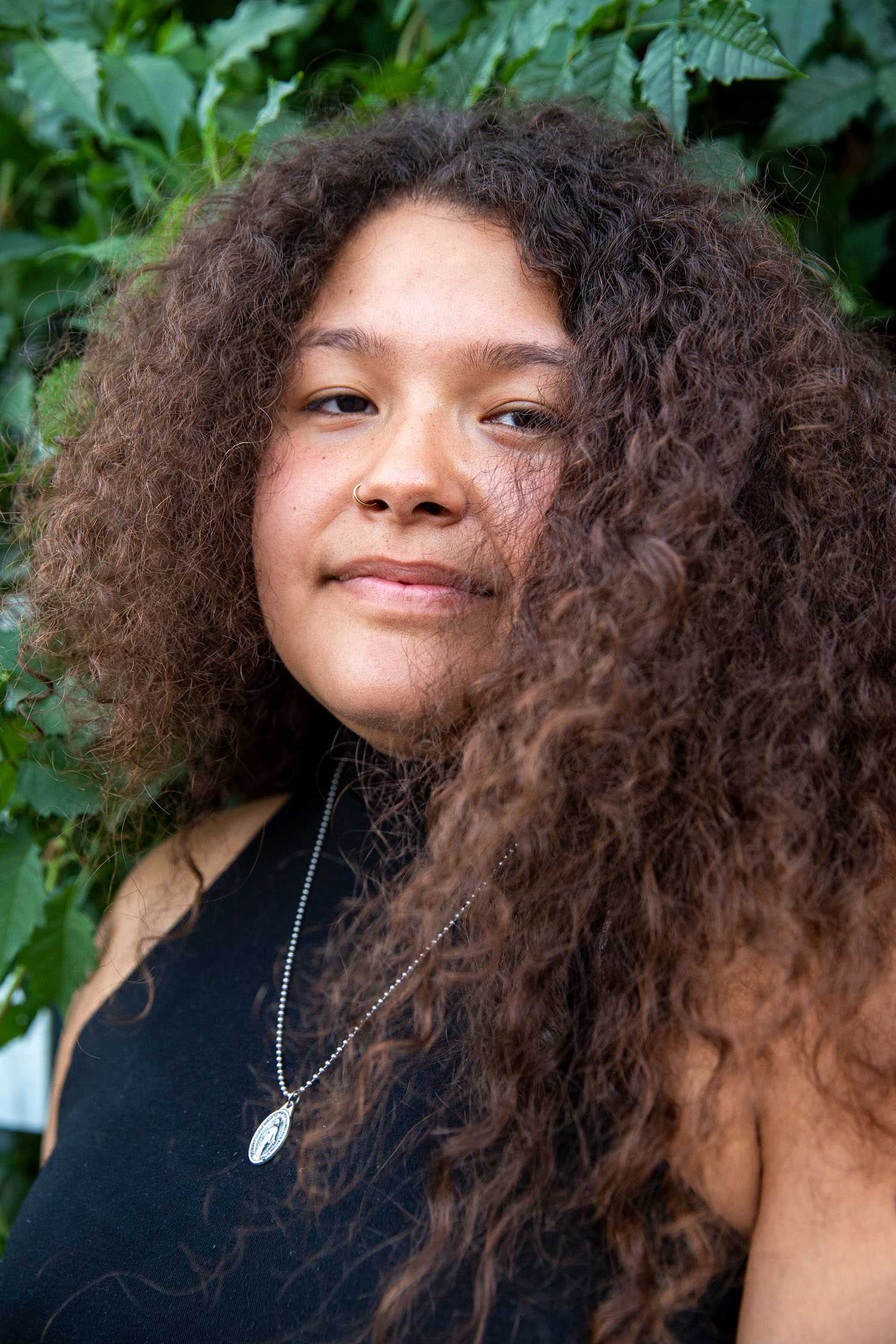 Louisville sophomore Marti Frank describes her style as bold but comfy. Her favorite piece in her closet are her bright velvet pants. “They’re super comfy, but they also make me feel super confident because they’re not something you’d see every day,” Frank said. (Photo by Joeleen Hubbard) 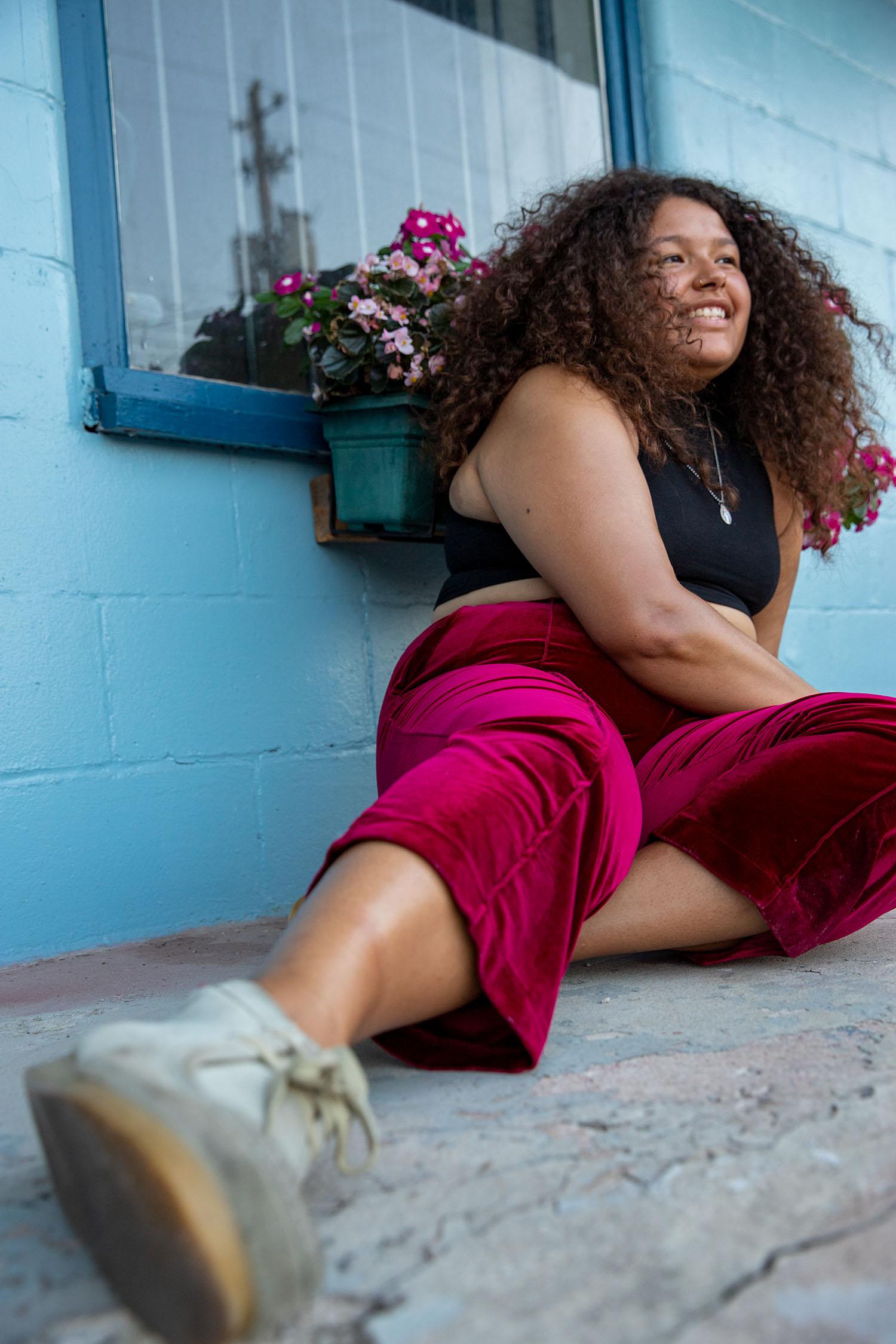 With bold colors and vintage accessories, Marti Frank is inspired by Maggie Rogers’s ’70’s influenced style. “My style expresses my personality by being free and comfortable, but not too serious,” Frank said. (Photo by Joeleen Hubbard)

Louisville sophomore Marti Frank finds inspiration on social media and incorporates past trends that are making a comeback into her wardrobe.

Naming musician Maggie Rogers as a fashion icon, Frank’s look keeps retro current. Her unique appearance is a genre all of its own.

She describes her look as “sixties-esque Brooklyn,” which she said means she blends what’s popular now with popular influences from the past.

Frank’s most prized piece is from Vintage Banana, a vintage shop in Louisville. The ‘80s men’s sweater represents her retro-inspired look and is an example of her top piece of fashion advice.

“Pick for you, because fashion is always changing,” Frank said. “Pick something you’re comfortable in with your body, that fits your body and not society’s culture of what’s in, and just stick to it.” 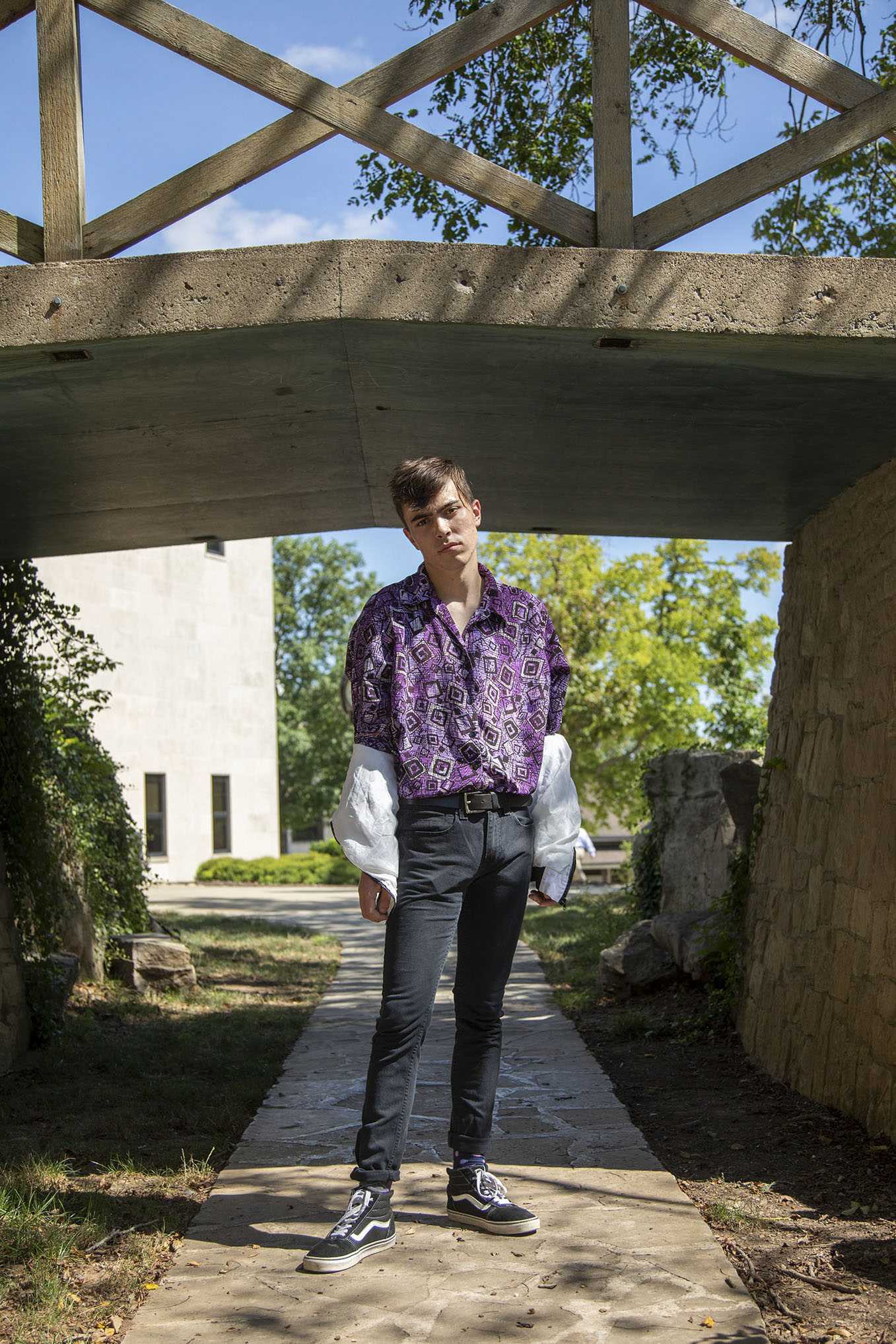 Louisville junior Adam Murphy soaks up the sun at the top of the Hill in between classes. (Photo by Rhyne Newton) 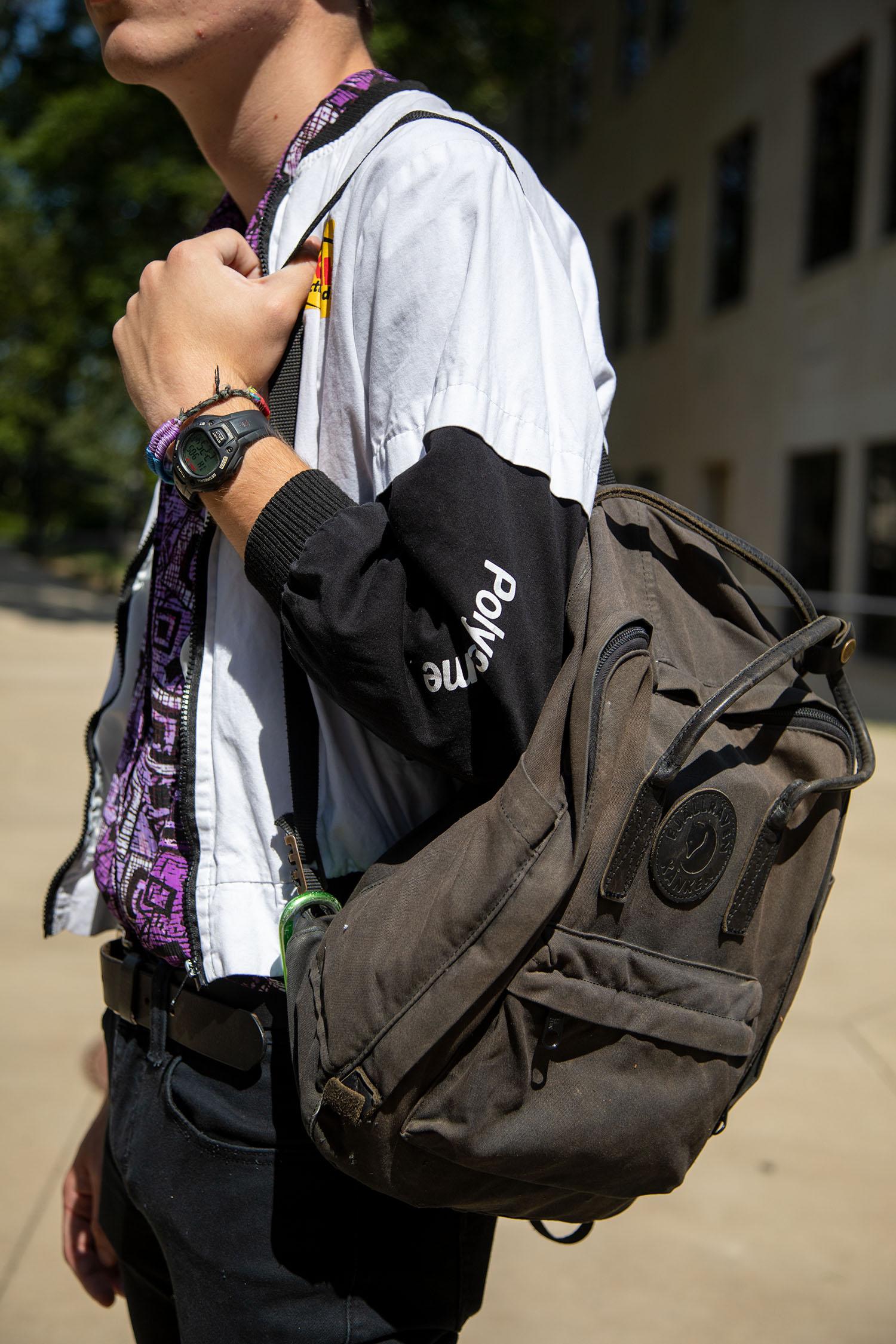 Murphy enjoys pairing his outfits with different colors. “I am colorblind, but I enjoy fashion, so I‘ll always ask a friend if my outfit matches with the colors I’ve picked out,” Murphy said. (Photo by Rhyne Newton)

Becoming a Hilltopper has meant more than pursuing a degree in journalism for Adam Murphy, a junior from Louisville. It wasn’t until arriving at WKU that he was able to explore his relationship with his own fashion sense.

From the age of 4, Murphy attended Catholic schools, where uniforms were non-negotiable. Outside of his school restrictions, when his father wasn’t buying his clothes, Murphy was typically given hand-me-downs, leaving little opportunity for exploration in the style realm.

“I was always scared to express myself in different ways and definitely didn’t adjust to that until college,” Murphy said.

With autonomy, Murphy began to express his individuality, embracing everything from mismatched prints to crop tops. Drawing inspiration from the Met Gala and muses like actors Ezra Miller and Timothee Chalamet, Murphy still creates his own style.

Murphy inspires onlookers to only wear what feels good, despite the opinions of others. 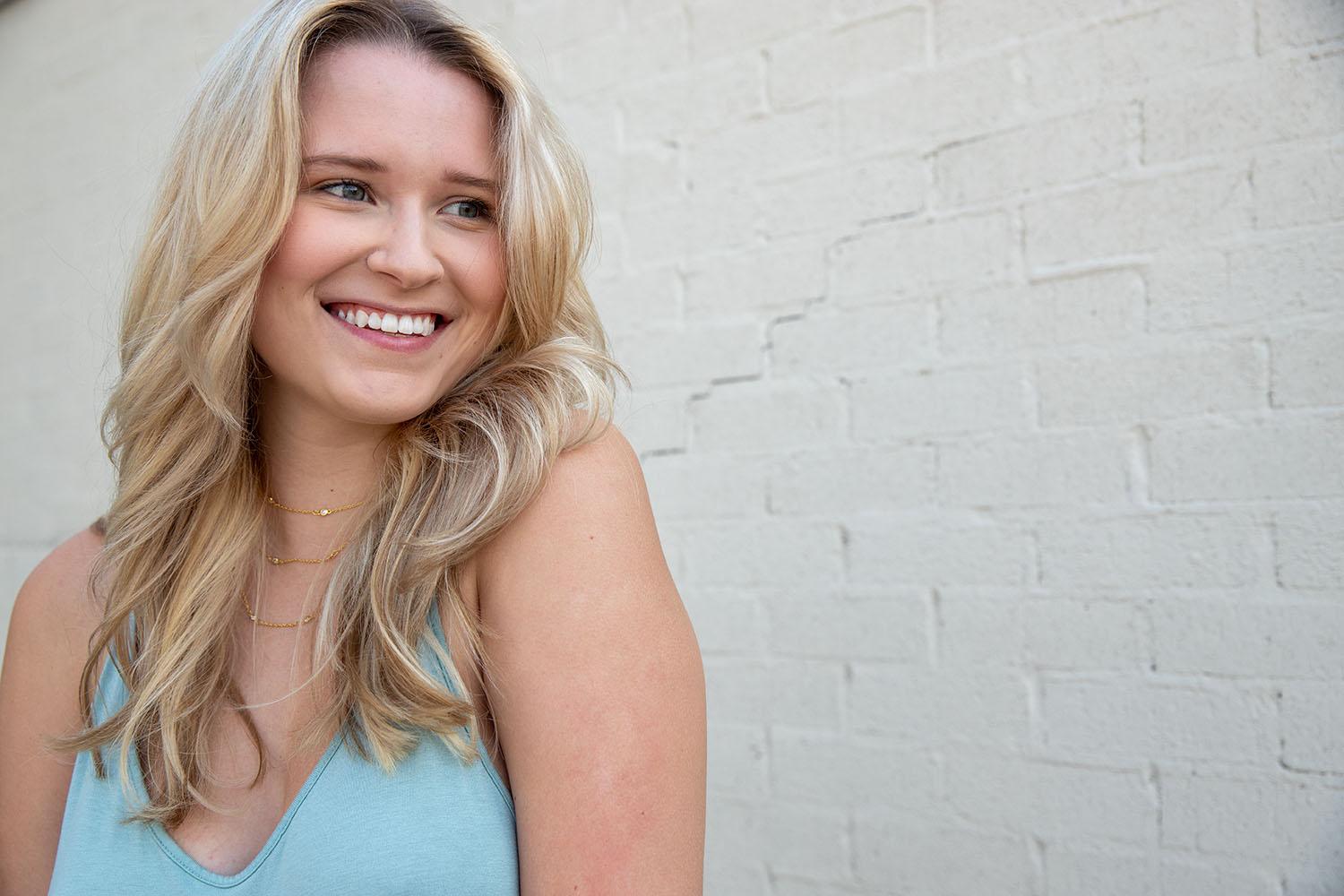 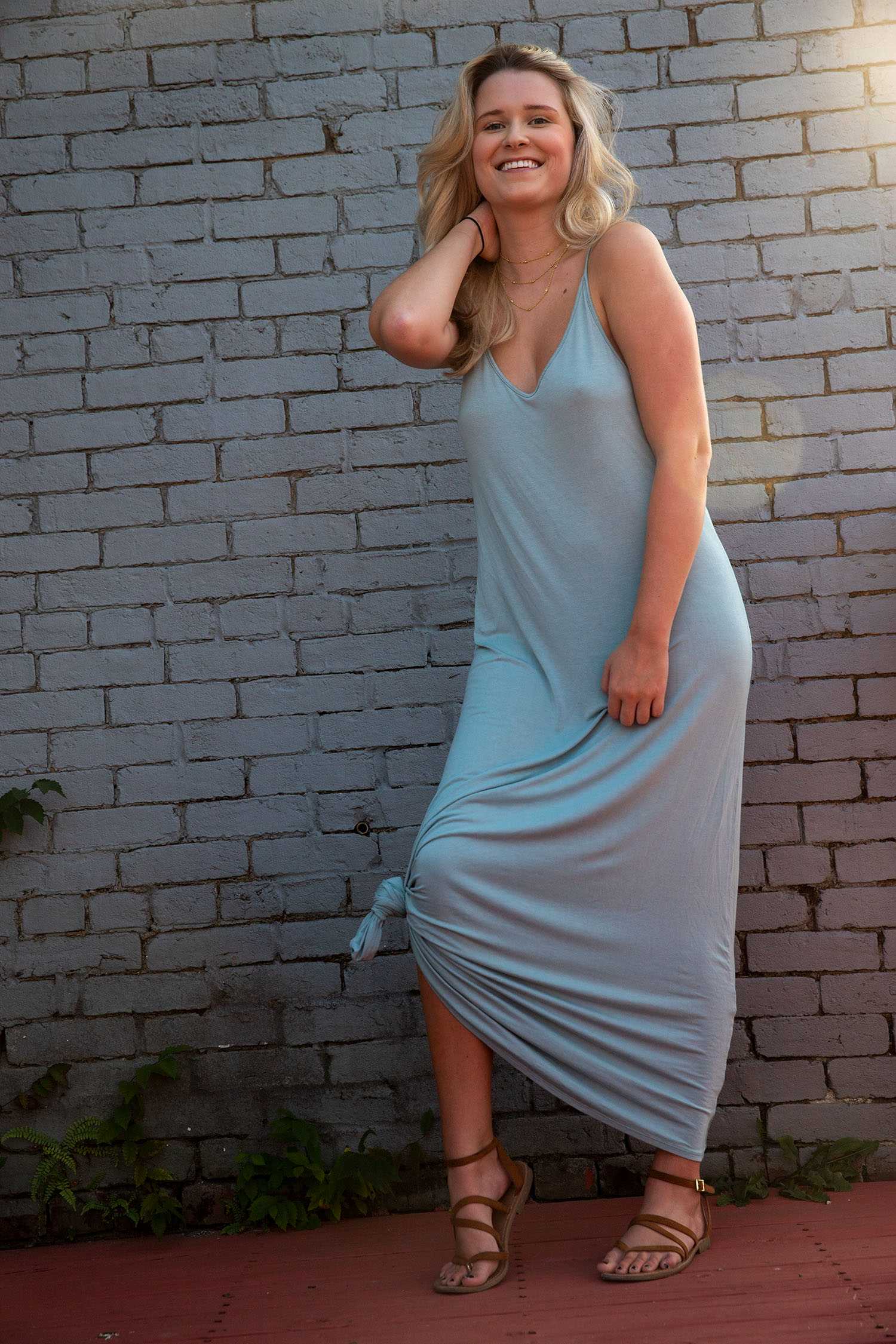 Neighbors said she can’t live without her cozy sweaters and leggings during the fall season and can be found shopping at Target, Steel Mill & Co. and Old Navy. “I don’t base my style off of others,” she said. “When I see something I like and if it’s functional then I’ll get it,” Neighbors said. (Photo by Joeleen Hubbard)

“I used to put a lot of effort into my look,” Neighbors said. “I would wear extensions and fake lashes and everything. Now, I just put on what’s comfy, roll out of bed and put on some comfy clothes.”

Self-described as rustic, hip and casual, Neighbors’s desire for authenticity is the central element to her personal fashion. Her look is never influenced by trends or social media platforms and retains a bona fide true-to-self edge. 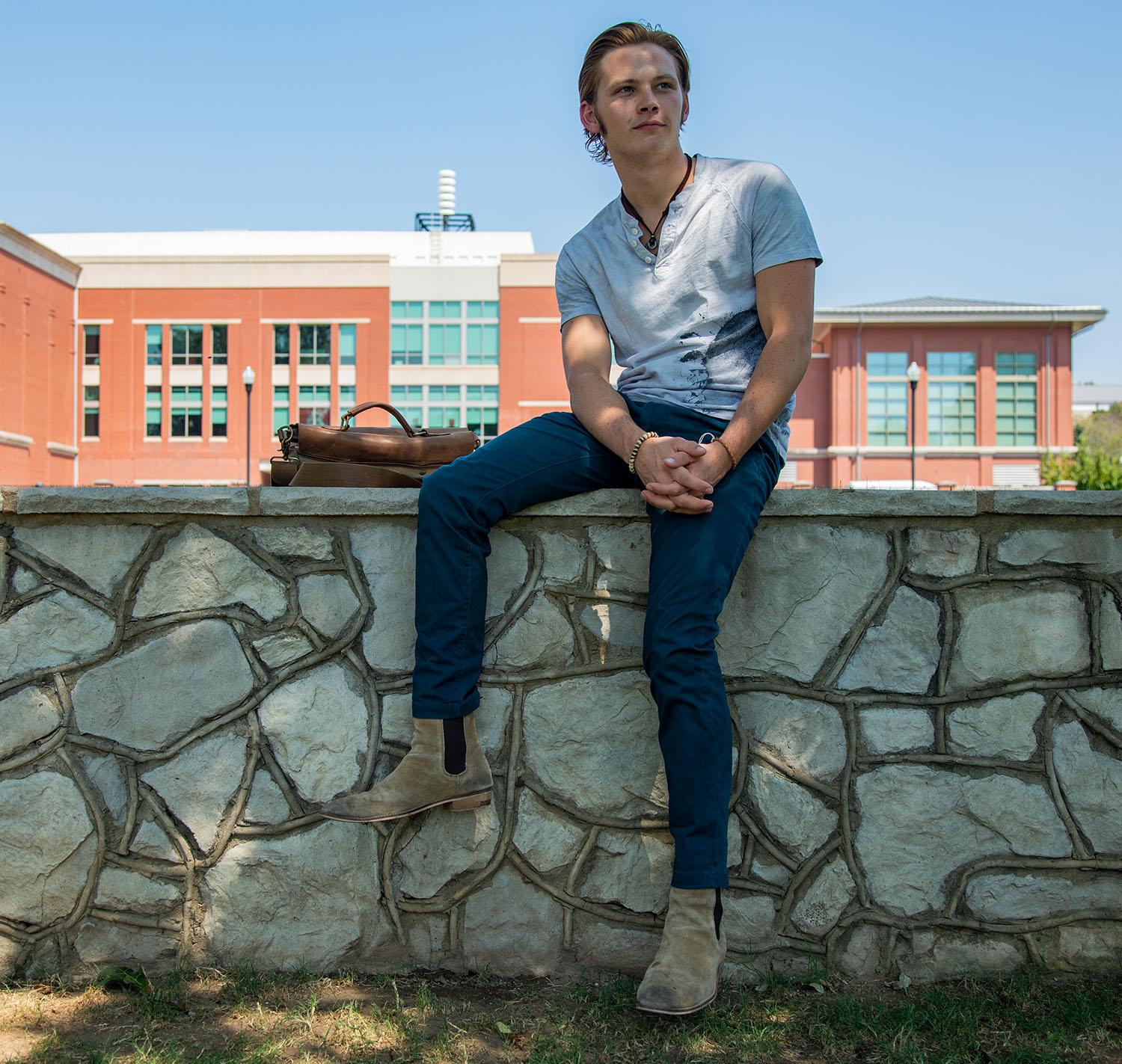 San Diego sophomore Nate Clark takes a break on the rock wall of South Lawn. He said his style icons are Tom Hiddleston and Chris Pine. (Photo by Rhyne Newton) 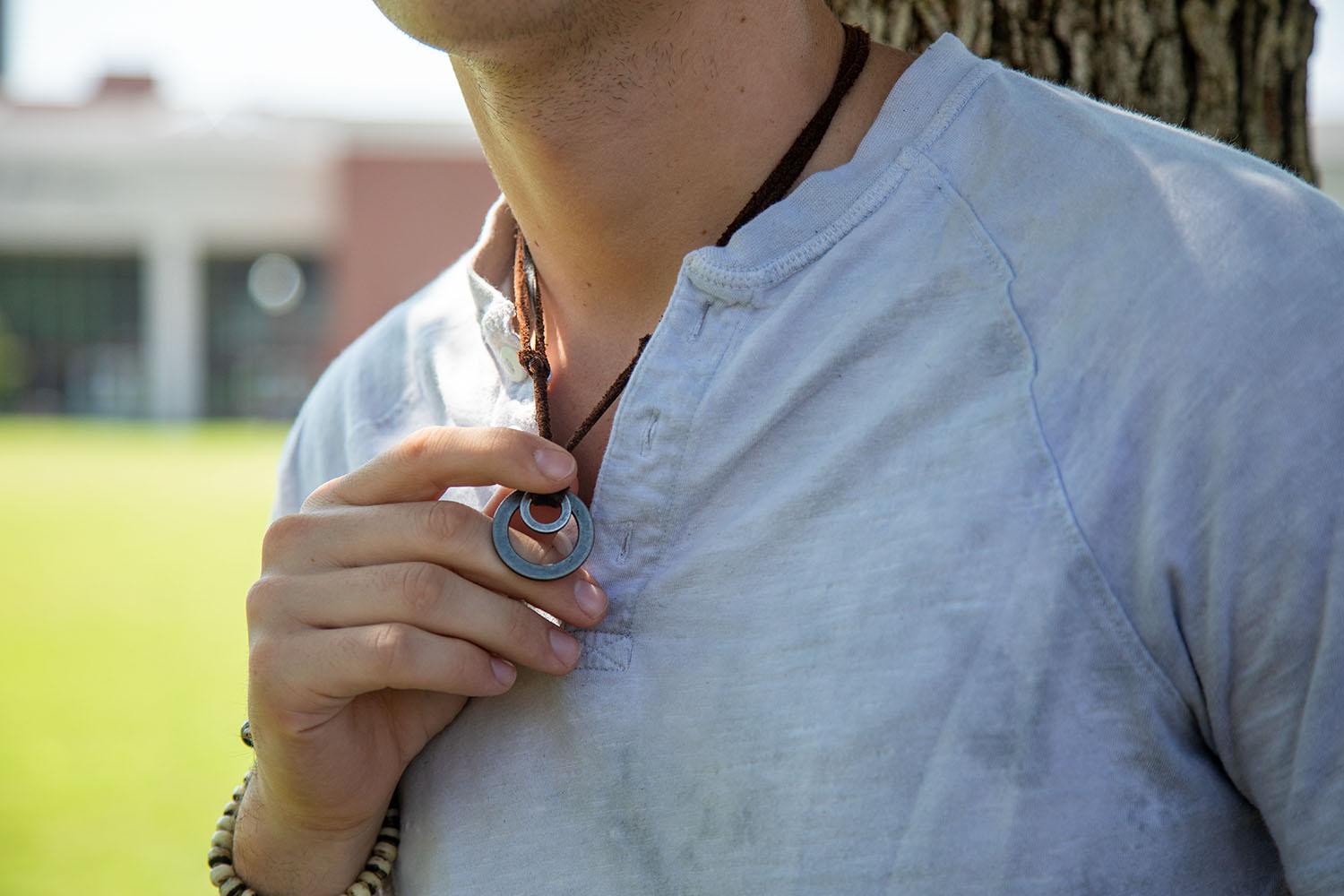 Clark prides himself on having signature pieces, even making some original at times. “This shirt was originally spotless, but after getting paint splattered on it, I dyed it grey and now it works,” Clark said. (Photo by Rhyne Newton)

Nate Clark, a sophomore from San Diego, said his style evolution can be credited to his major in film.

As Clark became interested in acting, his awareness of Hollywood trendsetters encouraged him to delve beyond his comfort zone. Formerly a jeans and sweatshirt guy, Clark cited Marvel actors as his fashion influencers.

Check out Clark’s self-described cool but comfortable style on campus in the approaching months, with his staple light-washed denim jacket lined with white wool, a piece he incorporates all winter long.