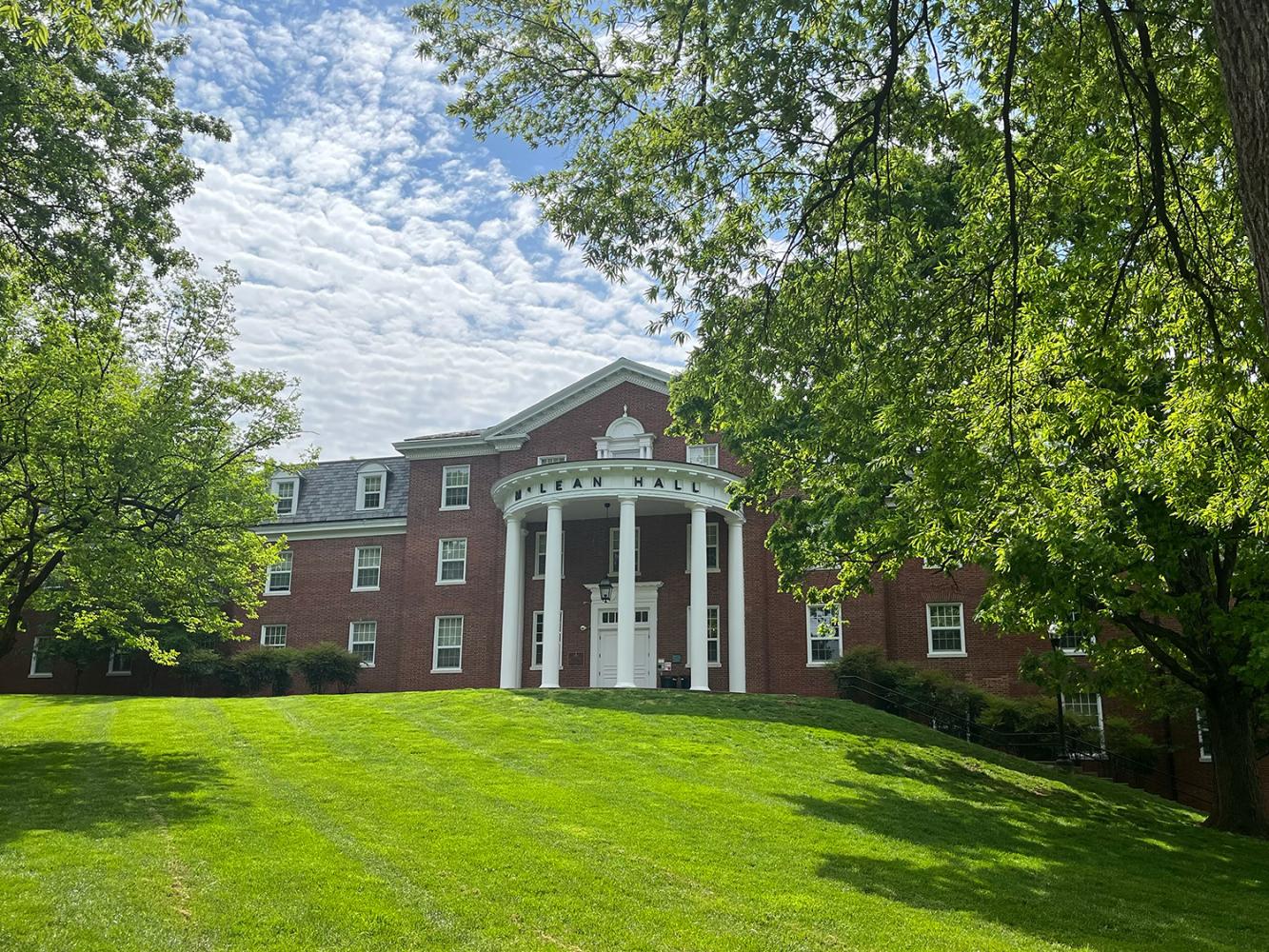 WKU students signed a petition advocating for better living conditions and financial compensation in McLean Hall. The petition, which was created on April 9, has 288 signatures.

The petition, started by Newburg, Indiana, sophomore Kayla Distler, addresses issues in the dorm including mold, broken laundry machines, heating and air concerns and issues with a lack of hot water.

Distler said she created the petition after living conditions in the dorm progressed from being annoying and uncomfortable to unlivable from March 30 to April 8.

“There is only one point that I would be able to describe as essentially unlivable, which is when our boiler went out, and we had no hot water or heat when it was 32 degrees out,” Distler said. “That went on for three or four days, and it was truly awful.”

Distler said the hot water and heating issue happened on March 30 and that temperatures in McLean dorm rooms were below 50 degrees in addition to freezing cold water.

Distler said she and other residents did not receive a warning about their boiler being cut off.

“No one told us anything,” Distler said. “It was eventually fixed, but now the water just gets warm, not hot.”

Jace Lux, the university’s director of media relations and university spokesperson, said students are asked to submit a maintenance request through an online form to report issues as they occur. Lux said this process allows students to receive updates on the progress of their work order while the university is able to track issues, address concerns and identify maintenance trends in each particular hall.

Lux said Housing and Residence Life (HRL) staff met with or attempted to meet with all students who voiced their concerns about living conditions in McLean.

“The concerns brought forth were addressed with the majority of issues having already been resolved at the time of those meetings,” Lux said. “Not all students who raised concerns responded to HRL requests to meet.”

Distler said she created the petition demanding financial compensation for residents because she wanted Housing and Residence Life to hear her complaints and acknowledge that the issues were not residents’ faults.

“My goal is to be heard and advocate for the fact that $3,185 a semester is too much money for the issues we’ve dealt with,” Distler said.

Distler updated the petition on April 14 and said she and another resident from McLean met with the assistant director at Housing and Residence Life on April 12.

“She was incredibly kind, compassionate and willing to listen to every single issue we had,” Distler said in the petition’s update. “There were five specific things she told us that she would make sure to take the initiative of improving, including better communication about maintenance requests, better communication from housing staff when issues arise and working closer with the company that provides our laundry facilities.”

Distler said in the update that the meeting left her “feeling validated and more trusting that the future will be better.” She said she has been in contact with the assistant director via email and that she is working to contact the person in charge of addressing financial compensation.

Distler said she doesn’t think she’s being unreasonable in her belief that paying $6,000 a year is too much money to pay for a dorm considering the unresolved issues she said occur in McLean every day.

Senior Sophie Lamontagne from Metropolis, Illinois, said living conditions in McLean were “OK” besides recent issues with heat and water.

Lamontagne said she has been showering at one of her friend’s apartments recently due to issues concerning water temperatures.

Lamontagne said there were problems with hot water in the dorm, and that when residents complained to Housing and Residence Life, they were told “to go shower at the Preston Center” in 50-degree weather.

Lamontagne said that Housing and Residence Life has said the problem has been fixed, and while Lamontagne acknowledged the water is no longer cold, she said the water is “very lukewarm” instead of hot.

Lamontagne said she believes the thermostats specific to McLean dorms influences students to choose to live in the residence hall, but she said there were instances when the control panel occasionally did not respond, and when it did, only cold air would blow.

“I know some people were having temperatures in the 50 degree range, like it would be colder in the building than it was outside,” Lamontagne said.

Lamontagne said she appreciated her resident assistant throughout the situation.

“I knew that she was dealing with the same issues that we all were and that she was just trying her best to communicate with the information that she had, which I could tell was not a lot,” Lamontagne said.

Lamontagne said she felt an email from the McLean hall director addressing the dorm’s living conditions should have been sent to residents sooner than it was but acknowledged he was “trying his best” with the information he was given concerning the situation.

“I felt like we deserved a bit more of like a more official email than that versus having to have the information trickle down through this pyramid of, you know, bureaucracy,” Lamontagne said.

Lamontagne said she felt after several students complained about living conditions in McLean, the responsibility of contacting maintenance about fixing the issues did not belong to her and other residents but to the hall director or someone else who could advocate for them.

“When the volume of issues became what it was, I felt like it was really alarming that there weren’t more sweeping measures being taken,” Lamontagne said.

One of the issues addressed in the petition concerns residents’ ability to do laundry in McLean, which Distler said has been a battle since she first moved into the hall in early August.

Distler stated in the petition that one of the washing machines flooded the entire McLean washing room in February of this year before all three washing machines broke. Distler said residents had no options for washing their clothes as they weren’t given access to other dorms and that the issue was not resolved for over a week.

“At the beginning of this semester, every washer went down, and we weren’t given any directions or a timeline about what to do for laundry or when to expect a fix,” Distler said. “Once it was fixed, the company had apparently told whoever that we needed to stop opening the washers mid-cycle, which is not possible because the doors lock.”

Lamontagne said she is bothered by the situation concerning McLean’s bottom two dryers, which she said are “consistently breaking,” as she is concerned for one of the students living in her dorm who is disabled and relies on the help of others to move her laundry.

“It does not sit right with me,” Lamontagne said. “I think that at the bare minimum, we should be ensuring that she has full access to laundry stuff at all times.”

Lamontagne said she signed the petition because she was impressed by Distler and the record she kept on incidents concerning McLean. Lamontagne said the petition’s log of maintenance issues reminded her of previous problems that she either forgot about or brushed off.

“I realized I had kind of gotten used to a certain culture of like, ‘Oh well, wait a few days, and it’ll be sorted out,’ versus like this is a pattern of behavior that needs to be addressed,” Lamontagne said.

Distler said mold first became an issue in September 2021 and that some residents still have not seen solutions months later.

“Some of the people on my floor have complained about the mold but are dismissed whenever people have come to check it out, as in they don’t take care of it, or they take care of it poorly,” Distler said.

Distler said she contacted maintenance about the mold in her dorm.

“Eventually when someone came out, the issue was blamed on me for my houseplants and the fact that we had a tree slightly shading our window,” Distler said.

Kyle Hodes, a sophomore from Louisville, said he has not experienced the issues presented in the petition.

“I’ve had no issues with McLean,” Hodes said. “I mean the dryers were out for a week, but it wasn’t that big of a deal for me. I just went when nobody was washing their clothes. Also, that happens no matter where you go really. Those break all the time.”

Hodes said his water has been “perfect” despite the complaints from other residents that led to the petition’s inception and that his shower “hasn’t been sensitive.”

Lux said both the WKU Housing and Residence Life and the Department of Facilities Management monitor maintenance requests to determine if unusual maintenance trends develop within each of the residence halls.

Lux said students are always encouraged to meet with Housing and Residence Life and the Department of Facilities Management staff and leadership to address their concerns.

Lamontagne said she doesn’t feel as angry as some other students about the situation regarding living conditions in McLean, but she does believe residents should be compensated.

“If this were like a normal lease agreement, and we were having these issues so consistently, we would be compensated in some way or there would be some sort of relief on rent,” Lamontagne said. “I don’t think that should change just because of where we are and where we live.”