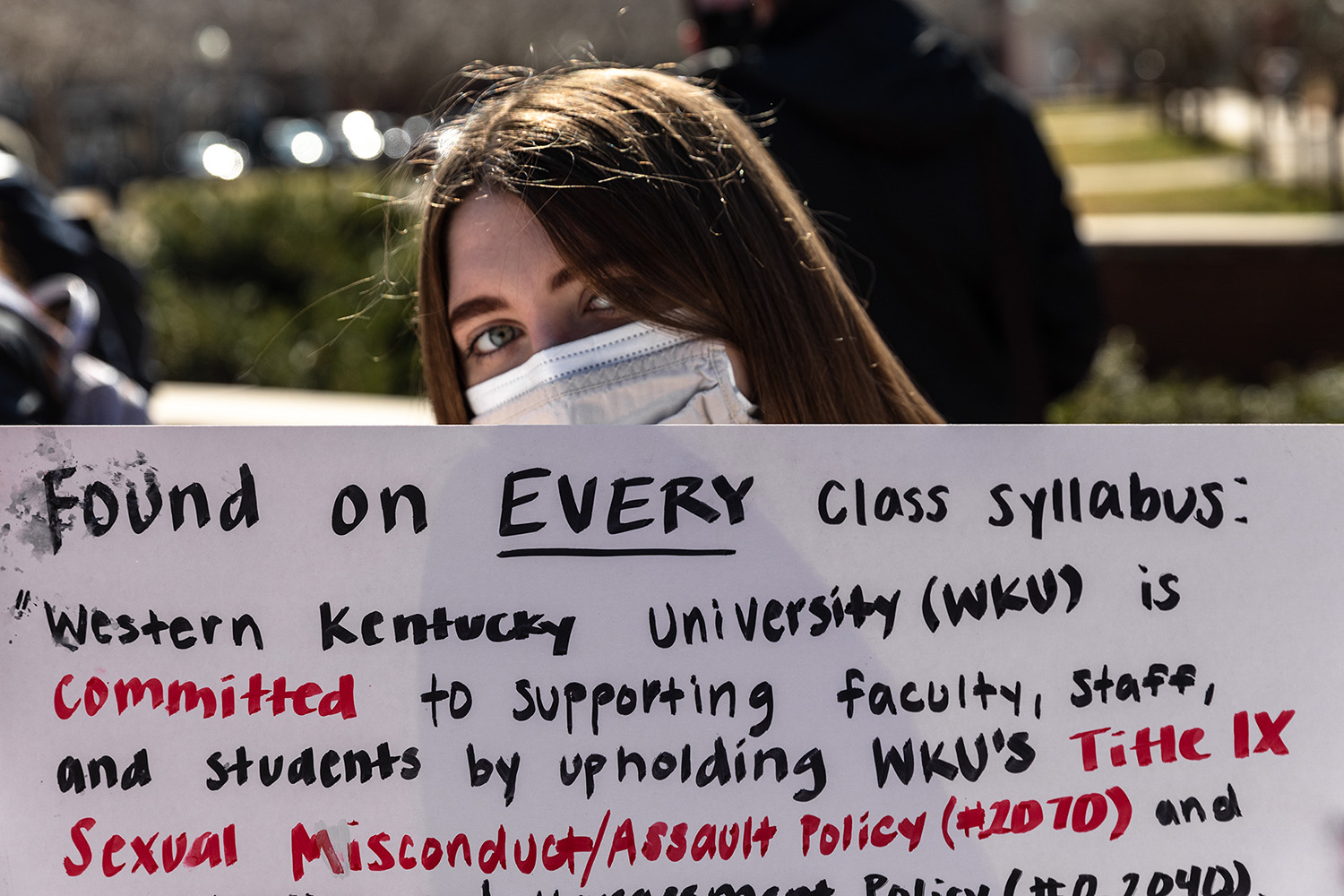 A WKU Student hold a sign emphasizing the universitie's Title IX sexual misconduct/assault policy during a march aginst sexual assault on the campous on Friday, Feb. 18. (Photos by Brett Phelps)

Bowling Green Survivors Collective held a protest against sexual assault within Greek life on Friday, Feb. 18. BGSC is a support network for victims of sexual assault and abuse, specifically for members of minority groups, according to their Instagram.

Participants protested in response to an article published by the Herald on Wednesday detailing a student-filed lawsuit against WKU, Kappa Delta Sorority, Inc., Sigma Phi Epsilon Fraternity and 17 other defendants. The student alleged in the lawsuit that the defendants failed to protect her from being raped at McCormack Hall after a Greek event where she allegedly was forced to drink in February 2021.

Ashley Gibson, a junior from Lansing, Michigan, is the co-founder and co-administrator of Bowling Green Survivor’s Collective. She said the protest was organized “to bring light to a reoccurring issue of sexual assault cases being treated with impunity and complacency throughout WKU and the Bowling Green community.”

Gibson said the protest spawned from student “outrage” to the disclosure of WKU, Sigma Phi Epsilon Fraternity and Kappa Delta Sorority, Inc.’s treatment of the victim after she reported her alleged sexual assault in February 2021.

“This has been a prominent and ongoing issue in Bowling Green, and until something is done about this issue and the perpetrators are held accountable, it will continue,” Gibson said.

Gibson said it is important to organize and participate in protests to express the need for change, present the standards expected for addressing sexual assault, and push for accountability.

Gibson said the systems put in place within Greek organizations to prevent sexual abuse from occurring are “rarely and improperly enforced” which she said allows “perpetrators to continue to cause harm.”

The student alleges in the lawsuit that WKU did not train Greek Life on sexual assault awareness or prevention before the student’s assault. WKU then held face-to-face training with members of Greek Life as punishment for the student being sexually assaulted, according to the lawsuit.

“When it comes to their values, they have opportunities to create safe spaces and fail to follow through, which shows how much safety is failing to be prioritized,” Gibson said.

“It puts the change and purpose into everyone’s face, even if it’s uncomfortable,” Smith said.

“The culture that it has embedded in the entire college life is really damaging to women,” Smith said. “It just keeps recurring, and something needs to change.”

A study conducted by the University of Oregon in 2014 found that women involved in Greek organizations have a greater chance of being sexually assaulted, with 40% of participants, all sorority members, reporting “they had been subjected to rape or attempted rape” and 48% reporting “they experienced nonconsensual sexual contact.”

The protest began at Centennial Mall at 1 p.m. where protestors marched to Downing Student Union and up the Hill to Cherry Hall.

Nathan Gillispie, a junior from Grayson, said a protest on campus addressing sexual violence brings further attention to the issue.

“If people are trying to get their food, and they see a bunch of people standing at Centennial Mall, it paints a different picture, like this is an actual issue that people have to worry about,” Gillispie said.

Senior Sam Sartore from Gallatin, Tennessee, also participated in Friday’s protest. Sartore is the vice president of Beta Gamma Phi, the international fraternity on WKU’s campus, and said part of the organization’s mission is to redefine fraternity culture.

“We thought it was important to make a showing here today and stand up against sexual violence and the silence that it creates,” Sartore said. “WKU has shown that they don’t really care about victims repeatedly, and so we thought that it was important to come and make everyone know that we care and something needs to be done.”

Sartore said it is important to participate in protests and marches against sexual assault because people often “turn a blind eye” to incidents of sexual violence when they aren’t affected directly.

“It’s so ingrained in our culture that unless you mobilize and make your presence known, it’s really easy for people to forget that it is as big of an issue as it is,” Sartore said.

Satore said he believes traditional Greek life instills in men that they don’t have value unless they are sexually active or providing for someone else. He said Betta Gamma Phi is trying to change this culture.

“I think that causes a lot of self-esteem issues for men and causes them to look for validation from peers in really poor manners,” Sartore said.

Franklin, Tennessee, freshman Evan Holihan said he participated in the protest because he believes the alleged sexual assault was wrong and that Greek organizations need to change

Holihan said the occurence of underage drinking at fraternity and sorority parties creates an environment for instances of sexual assault to occur.

“Everybody knows that happens, but nobody’s willing to change it because of the money it brings into people’s pockets,” Holihan said.

Freshman Aungsansu Hein from Burma said she believes what happened to the victim of the alleged assault was wrong and that she feels WKU is “trying to sweep it under the rug.” Hein said she attended because she wanted to support the victim.

Graduate student Star Robertson from Radcliff said her reason to participate in the protest was personal, as she has been a victim of sexual violence both on and off WKU’s campus.

“Last semester was my sixth assault, and it was by a member of Greek life, so I hold this very personally in my heart,” Robertson said. “I have a lot of friends that have been victims on this campus. It’s an important thing to bring light to these issues so change can happen.”

Robertson is a member of both the Nashville, Tennessee, based Upsilon Sigma Chapter of Sigma Gamma Rho Sorority, Incorporated and WKU’s Zeta Tau Chapter of Alpha Kappa Psi Professional Business Fraternity, Inc. She said Greek culture’s contribution to sexual violence varies case by case and that she “doesn’t judge as a whole.”

Robertson said people can’t blame all of Greek life for sexual violence and that her sorority, Sigma Gamma Rho Sorority, Incorporated, seeks to support victims of sexual assault and condone those who commit sexual violence.

Hopkinsville freshman LaJahnae Cayce said the culture within Greek life is to an extent responsible for instances of sexual assault and the silence that occurs thereafter.

“They don’t want to talk about it because it’ll produce a black stain on their reputation,” Cayce said.

She said Greek organizations are doing better about handling sexual violence, but that they “should get things taken care of as soon as they occur rather than waiting.”

Cayce said people don’t want to talk about the repercussions of sexual violence and instead choose to discuss how victims were dressed when they were assaulted.

“You can dress as modestly as possible and still be looked at like a piece of meat,” Cayce said. “We shouldn’t have to fear living as a woman in society. It doesn’t make sense.”

Lawrenceburg senior Patrick Beward said he participated in the protest because he believes the alleged sexual assault was “absolutely horrid,” and the situation should have been handled differently.

Beward said underage drinking at Greek events creates an environment fostering sexual violence and that those in power “should do a better job” to prevent assault. He said he attended the protest because it felt like the only thing he could do.

“I feel like it’s becoming the only way that we can really stop events like this from happening and prevent it from being covered up,” Beward said.

“I think it’s ridiculous that WKU is not doing anything,” Jimison said. “Sexual assault should not be something that is covered up, and I feel like it has been continuously covered up on campus by multiple organizations, not just the university itself, but many student organizations have been covering it up as well.”

Jimison, who observed the protest, said she believes protests and marches are important because they show awareness and create interest surrounding instances of sexual violence among campus communities and bypassers driving past them.

Jimison said she believes there is a taboo within Greek life to not speak out or discuss instances and the possibility of sexual assault. She said this idea is “extremely harmful for survivors.”

“It’s something that either Greek life needs to take a step back and reflect on, or it just needs to be disbanded altogether,” Jimison said.

Louisville sophomore Malia Gardner said she attended the protest and march because she stands with those who have been sexually assaulted, and she doesn’t understand how people can dismiss or justify cases of sexual violence.

“To be silent is to be with the wrong side,” Gardner said.