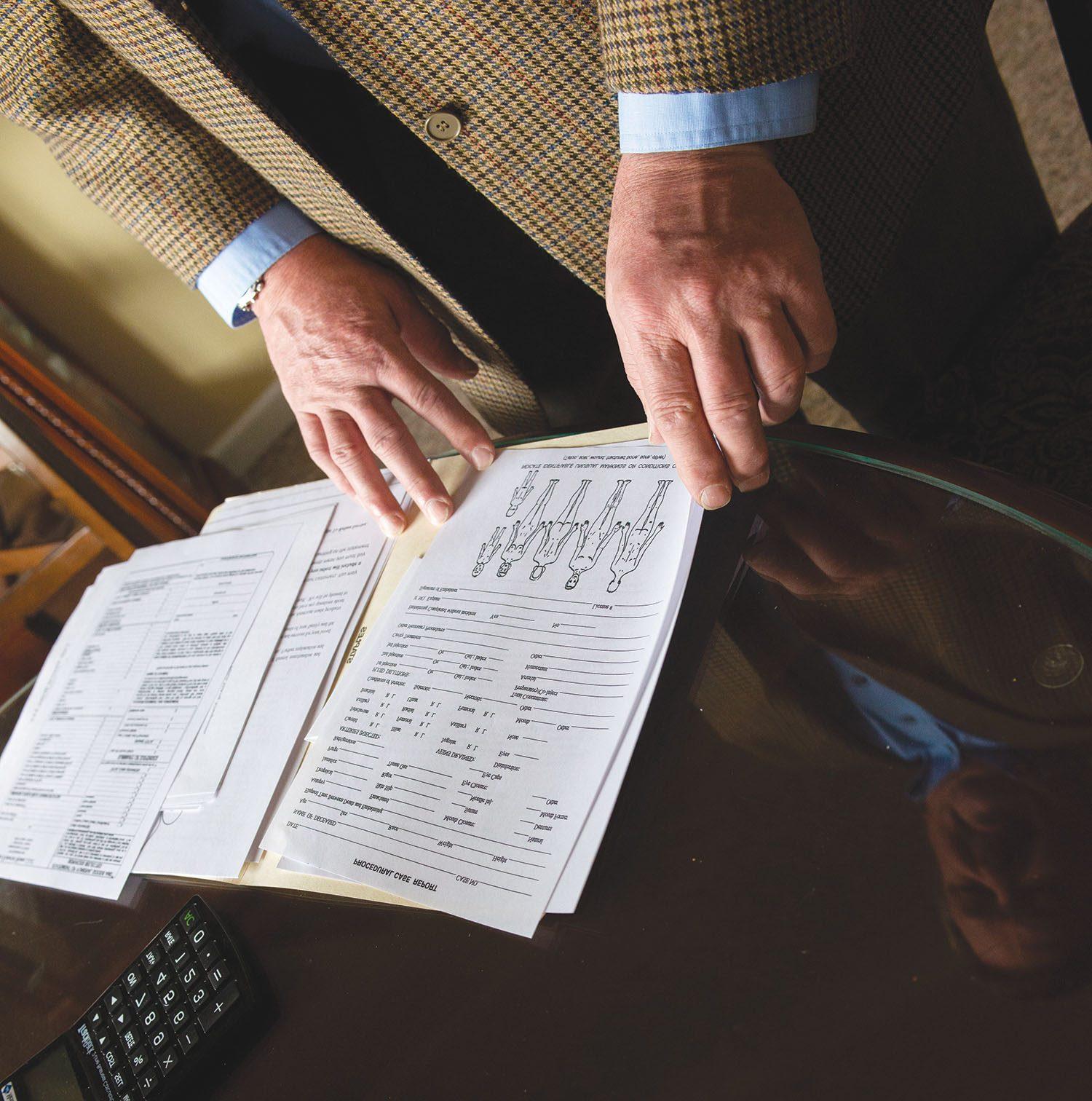 From the magazine: Tending to death

Deputy Coroner Dwayne Lawrence said a mother of a deceased child averted her eyes when he walked into the room. She stared at her feet when the elevator door opened and shifted uncomfortably. “I’ll just take the next one,” he said to her.

Lawrence said he understands that he is initially regarded as a family’s grim reminder of loss and is therefore treated coldly.

“It is a road we walk by ourselves sometimes,” he said of people who share his profession.

In the wake of death, grief and heartache follow. The difficulty remains among the living, Lawrence said. Though death care workers spend significant time with various types of deaths and bodies, it’s the grim effects on loved ones who are left behind that requires the care and focus of these workers. Lawrence and other professionals serve and comfort these bereaved families as their loved ones are prepared and taken to the grave for final farewells.

However, working so closely with death for a profession doesn’t separate Lawrence from the significance death possesses. Lawrence saw his first cadaver at 16 years old. He wanted to become an undertaker when he was in the third grade. As a baby, the doctors told his family that he wouldn’t survive due to problems with his kidney. Now 58 years old, Lawrence said he understands the range of emotions that seep from deaths. He has seen them countless times.

Now, he uses his experiences with death to assist families during their time of mourning. He works with them directly with tasks including filing paperwork, choosing caskets and monuments and planning funerals.

“It’s not just a business to me or a way I make my living,” Lawrence said. “When they look at you in the eye, they trust you.”

Lawrence said he remembers his father lying close to death on a hospital bed, telling him not to worry about what comes next. As a Christian, Lawrence said he believes he was meant for this profession. He said his faith has only grown stronger while working with these families, and he is comfortable with the idea of his own mortality.

“Grief is for our loss, not for the person that died,” Lawrence said. “They are in a better place.”

After he is gone from this world, Lawrence said he hopes people will say he was there for them during their darkest hours, when they needed someone they could never hold again.

“I close my eyes in death, and open them in glory,” Lawrence said. “I’ll see my friends and family that were gone before me.”

Most of all, he said he hopes God will take his hand and say, “Well done, my good and faithful servant. Come home.”

The embalming room is stark, sterile and smells like a nursing home. The room is where Brian Gugler, funeral director at Cone Funeral Home, embalms, rebuilds and prepares the bodies to look presentable for the loved ones of the deceased. A sign on the door warns of the presence of formaldehyde, a carcinogenic chemical compound.

One of Gugler’s first cases involved a Japanese-American woman who had killed herself with a shotgun blast to her face. He said it was difficult. Gugler used clay to rebuild the face and wax to resemble skin. Makeup and lighting were also integral in the process, he said, but they can also be challenging to work with due to different skin tones and deteriorating conditions of the corpse.

“You don’t want to see somebody right after they die,” he said. “It’s not a pretty sight. We’re not making them lifelike – we’re making them presentable so the family has a good remembrance of them.”

Growing up, Gugler and his mother visited art museums along the East Coast, he said. His mother was an art teacher, so he followed her classes and teachings and learned about colors and familiarized himself with their spectrums. His father was a chemical engineer. As a funeral director, he gets to combine working with chemicals with art.

“I use the best of both worlds,” Gugler said.

When Gugler prepared and restored bodies early in his career in the ‘80s, he said he was afraid to make mistakes because he wanted to prepare the bodies to accurately resemble how loved ones remembered them.

“There’s no in-between,” he said. “You can see it on the people’s face when they walk in, whether it’s right or wrong.”

Because of the many cultures in Bowling Green, sometimes Gugler has to provide or modify different services, he said. For instance, some people don’t want screws in the casket, and others don’t believe in embalming.

He said his experience working with cadavers has not significantly affected his belief in the existence of an afterlife.

“I’m working with the shell of the person – the spirit’s already gone, as far as I’m concerned,” Gugler said. “I’m trying to make it easier for the family that’s left to move forward in their life instead of being stuck in one spot.”

Gugler said he believes some people he’s worked with had to see their loved one’s bodies to come to terms with their deaths and be able to let go. Though he said he has come to excel at making the body ready, he is not immune to the effects death has on families, especially when it comes to a death of a child.

He also must be able to empathize with families to let them know he wants to take care of them, that he understands their pain and wants to make sure they don’t feel alone in their pain, he said.

When Gugler has time away from the dead, he likes to be away from people, he said, particularly by hunting and fishing in the woods. There is solace there that encourages self-reflection. He said that at social gatherings, people are often surprised and fascinated when he tells them what he does for a living.

“But this is my place,” he said of his profession. “I’m comfortable here.”

When a funeral procession arrives at Fairview Cemetery, Cemetery Division Manager Cathy Maroney leads them to the burial site. She said the cemetery maintenance workers decide beforehand on the best route through the cemetery’s winding paths.

Four cemetery maintenance workers stand by at a respectable distance, Maroney said. They watch and wait until all of the attendees have left the funeral. She said they want to make sure they are considerate of the loved ones of the deceased.

“We don’t want them to feel like they’re just another job, because they’re not,” she said. “We want to make sure that we are reverent to the family.”

By this time, loved ones of the deceased have gone through the actual death, meeting with the coroner and visiting the funeral home, Randel Cochran, a cemetery maintenance worker, said.

“This is it, their final resting place,” he said.

Cochran said the maintenance workers dig graves, mow the grass, bury bodies and set up for burials, and their attention to detail at funerals is impeccable so loved ones don’t have to worry about anything else and can focus on their deceased loved ones.

The workers try not to miss the smallest things, like straightening out and removing leaves from the carpets, he said.

The maintenance workers dress the grave with a green blanket, set up a tent and arrange felt chairs and flowers around it.

“When the family arrives, they don’t see a scary, muddy hole,” Schmidt said. “It’s a place where they can sit down for a few minutes and say their last goodbyes to somebody.”

Anthony Cooper, another cemetery maintenance worker, said it is a selfless, dignified ordeal that demands respect and compassion, and he focuses only on the families.

“It’s as simple as noticing that little puddle of water that we could throw a carpet over to keep them from stepping on it,” Cooper said.

When the funeral is over, the workers descend on the burial site. The tent, chairs and carpets are removed, and the grave is filled and raked. Any flowers that were left are placed on the grave, Maroney said.

“It’s routine to them to the point to where it’s almost quiet,” she said of the workers. “They know what they’re doing.”

Often, she said, they will continue to the next funeral. At the end of the day, their boots are stained with dirt from multiple graves.

The idea of death seeps into loved ones and workers who tend to the dead, all in different ways.

Every morning around 7:30 a.m., a man enters Fairview Cemetery to visit his deceased wife. He sits down with her headstone in silence for about 20 minutes, and sometimes Jeremy Owens, another maintenance worker at the cemetery, sees him rest his head in his hands. The man has been coming for about five years, Owens said.

Owens said he feels sad for those who struggle with moving on, and through his own experience helping these families, he has learned to value what he has.

“Why would you ever have a bad day?” he said. “Seriously, you’re above ground. You see what’s waiting for you.”

Yet even with his 18 years of experience, death can still be upsetting. Noticing names of the deceased has made him particularly wary.

“First year I started, Ann Catherine got killed in a car wreck,” Owens said. “She was 10 then. She’s got a big white stone buried in plat one, site two. That’s why you’ve got to not remember their names, because I’ve known that girl for 18 years and have never seen her alive.”

Joe Schmidt, who is also a cemetery maintenance worker, learned there is a Muslim man buried at Fairview Cemetery named Dawud. He is buried in a manner that faces Mecca. Schmidt said since he is also Muslim, Dawud’s presence at the cemetery has made him want to thoroughly learn the Islamic prayer Surah al-Fatiha, the first chapter of the Quran. Schmidt said he wants to be ready when death arrives.

“I think you can prepare yourself to die, to go back to the source of things,” he said.

Schmidt said working at the cemetery has assisted him in his own religious path.

“No matter your beliefs, dying and mourning is a universal human experience,” he said. “That’s something we’re working with here every day.”

After work some evenings, after the deceased are laid into the earth with their loved ones’ farewells, Schmidt would think of Dawud and recite the al-Fatiha prayer for the friend he has never met.

Cochran said it is a privilege to be a part of such an important moment of someone’s life because it’s “the final resting place, the ultimate equalizer if you will.”

“It’s somber, but I feel fulfilled and good inside,” Cochran said.

Cooper said he and the other maintenance workers are all at the cemetery to serve the community.

“No matter how diverse our lives are and whatever we do in life, we come here in one agreement, and that is to serve,” he said.

Schmidt said he has noticed the parallel between his experience at Fairview Cemetery and taking care of his daughter – he both provides life and works with people whose lives have ended.

“In some weird way, there’s a kind of symmetry in that,” he said. “Birth, life, death. Over and over again. This is part of it. I get a feeling of peace doing this work.”