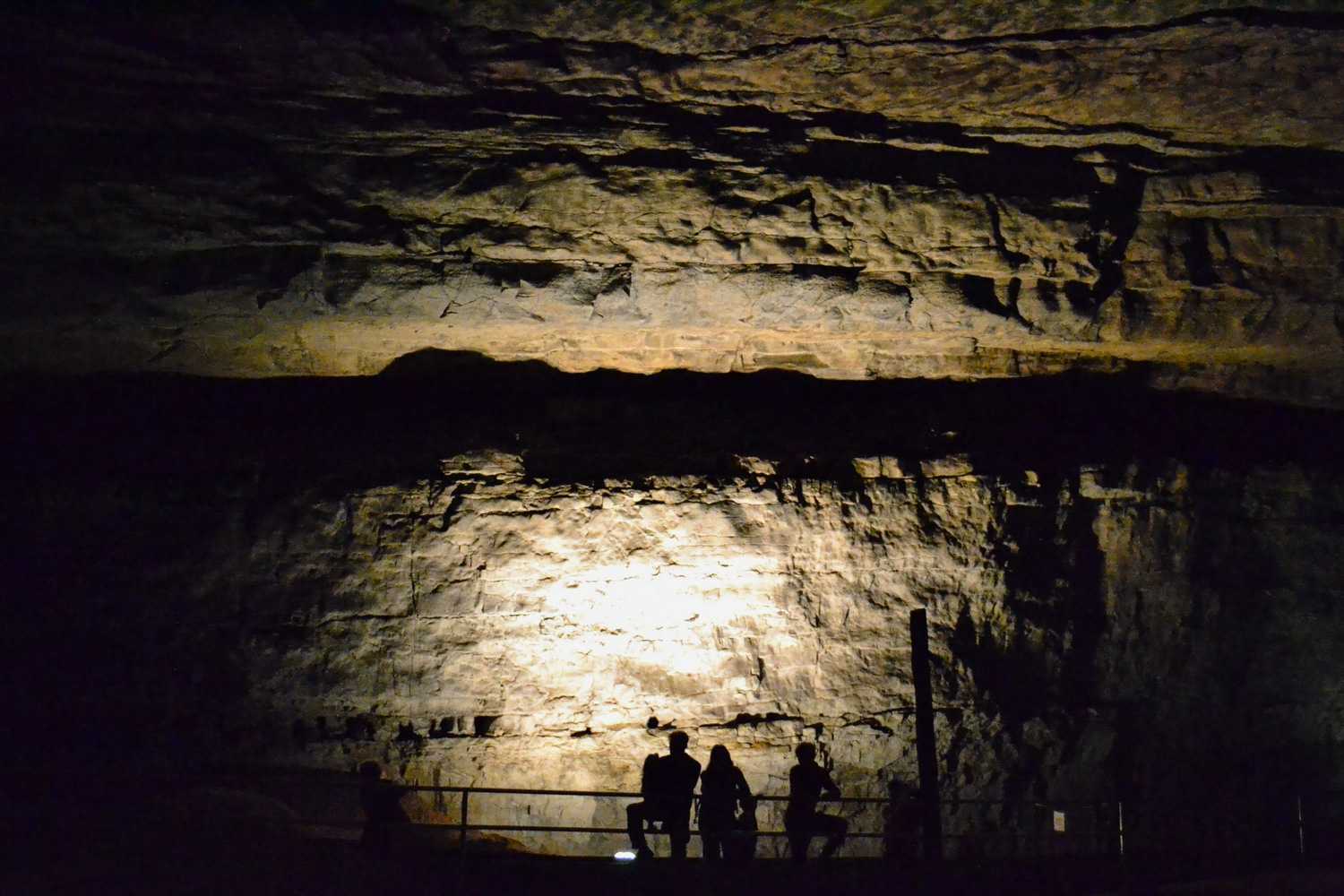 The Science Scoop: The science behind Kentucky’s caves

In honor of Halloween, science writer Tony Piedmonte is taking on some spooky topics. This week, he and a friend traveled to Mammoth Cave to investigate the mystery and intrigue behind Kentucky’s expansive cave system.

To say that we were excited for a tour of Mammoth Cave would be a huge understatement.

Energy vibrated through our car as my friend and I chanted “cave tour, cave tour, cave tour,” while taking the exit for Mammoth Cave National Park. We followed two other cars down winding roads surrounded by protected forests. The license plate ahead of us said Ohio, and we chatted about the possibility of meeting them and the hope of friendship, but that hope did not last long.

When we arrived at the visitor center, hundreds of cars had already filled the small parking lot. After finding a faraway parking spot and passing large groups of people queuing for cave tour buses, we found our way inside the crowded visitor center. We were next in line for a ticket when we overheard a young park ranger tell a woman that there were no more tickets for cave tours.

Defeated, my travel mate and I made passing eye contact as we were called over to the same park ranger who had just delivered the news that destroyed our dreams and crushed our spirits.

But alas, there was another option. The self-guided cave tour was still selling tickets, and fifteen minutes later, we were slowly descending down into the spooky, cold opening of Mammoth Cave.

The mystery of caves

Caves have been a source of human curiosity for hundreds of years. Whether motivated by economic gain or adventure, people continue to risk their lives (and lose them) by entering these dark, natural wonders.

Still today, caves are some of the least explored places on earth. Don’t believe me? Take Mammoth Cave for example. Roughly four hundred miles of underground passageways have been mapped, making it the longest known cave in the world, but explorers are still discovering more.

Part of the continuing mystery is the nature of caves. Most people don’t see caves as being very dynamic, but they arise from erosion, which generally means they are constantly getting larger and possibly more complex.

Most caves are found in limestone, like Mammoth Cave, which is eroded by water. Underground rivers and rainfall rush through limestone and carve out deep passages. The result is complex galleries and tunnels that may only be connected in one place just small enough to have once allowed for the flow of water.

This makes exploring a bit difficult.

With modern technology, you might think all caves would have been discovered and well-mapped by now, but this isn’t true. While laser scanning, better climbing material, toxic gas detectors and advanced robotics have definitely helped cavers explore, all caves are unique and therefore provide unique challenges.

There are caves that are completely flooded and others — like Mammoth Cave — that seem to go on forever. Some are full of toxic gas and sulfuric acid, some descend straight down at sky-scraper-length drops and some are encrusted in delicate crystals.

There is no one simple way to explore a cave. The only thing caves seem to have in common is that they are dark and dangerous. Cave exploration, even today, often comes down to a brave and well-informed caver, a map and a light.

Throughout history, caves have been used for shelter, healing practices, spiritual pilgrimages, tombs, mining, tourism and probably a lot more. Mammoth Cave itself has been used for almost all the above.

Descending into Mammoth Cave, a pressing silence and a cold, underground wind meet you. Just within one hundred feet, the sunlight becomes completely extinguished. If it wasn’t for electricity, cave visitors would be standing in a pitch black cavern.

It’s hard to imagine anyone would stay here long without any light, but early Native Americans were the first to find Mammoth Cave nearly four thousand years ago. They explored nearly six miles of the cave with only the light from their cane torches. However, after 2,000 years of visiting the cave, the Native Americans suddenly stopped. The cave was left to be rediscovered during the turn of the 19th century.

Since its rediscovery by European settlers, the cave has been used for many different purposes, including mining for black gunpowder agents, church services, and an experimental tuberculosis hospital (which five patients died in) during the early 1800s.

Tourism was brought to Mammoth Cave in 1838. Stephen Bishop, a 17-year-old slave from Glasgow, lead tours of the cave for wealthy aristocrats, and he ultimately discovered many of the historic attractions contained in Mammoth Cave. Tourism boomed for over a century, and Mammoth Cave was declared a National Park in 1941.

Walking around inside, tourists can see the remnants of past visitors. Old mining equipment litters the cave floor, and gloomy buildings erected for patient care still stand. Even old cane torches from the early Native American explorers still remain underground, perfectly preserved by the cool cave temperatures and humidity. The cave air works as a preservative and has allowed for many artifacts, and bodies, to remain almost perfectly intact. Very mysterious …

… Just kidding. It all comes down to science.

As my friend and I walked through the cave, whispers from other visitors, even those who are far ahead, echoed off the shadowy walls, illustrating the cave’s ghostly history.

As we emerged from the cave, it was easy to understand how people have spent their entire lives pushing deeper and deeper through the passages.

Taking the exit for the interstate back to Bowling Green, we both agreed that we would return for another tour of the gloomy Mammoth Cave — but next time, we would buy our tickets in advance.