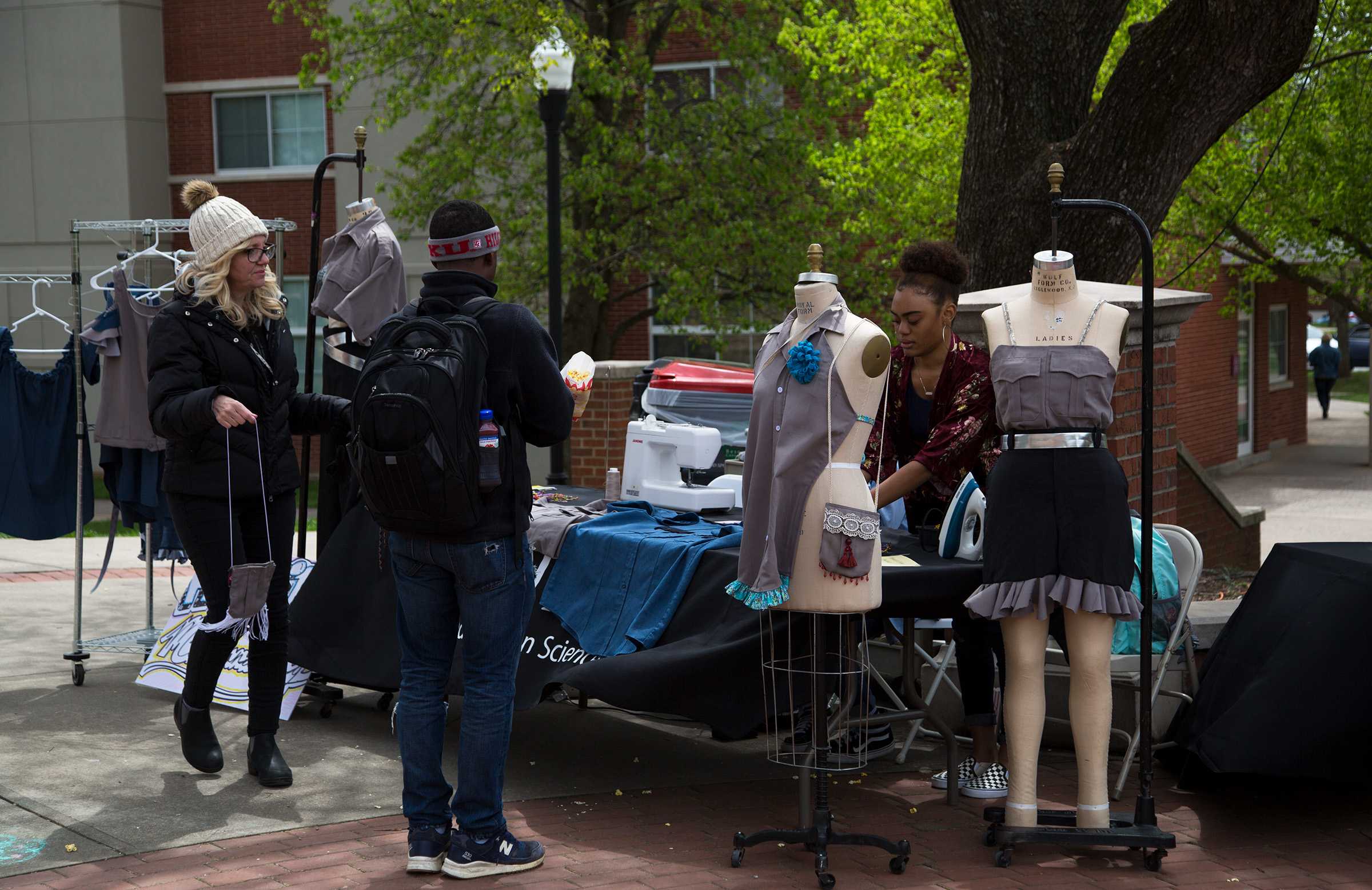 While walking from table to table at the earth day festival on April 19 in Centennial Mall, students passed by booths selling everything from handmade Kenyan baskets to potted succulents. Others gave away free food or taught about the importance of sustainability. President Timothy Caboni’s voice echoed in the background as he gave a speech. Big Red bounced from table to table giving high-fives and posing for photos.

As students continued strolling through the festival, a set of mannequins donning vaguely familiar clothing pieces may have caught their eyes.

In another life, these outfits had been the uniforms of campus police officers. Students and faculty from the fashion department at WKU had transformed old uniforms into fashionable garments, and now they were showing them off to the campus community in an effort to bring awareness to the cause of upcycling, or transforming an old product into something new rather than discarding it.

“With over 200 uniforms just getting thrown away, we decided to give back,” said Jalyn Loughran, a junior fashion major from Manchester. “We just volunteered to upcycle and help out. We just got together one day and started cutting and sewing and doing whatever we could do.”

Darian Keith, a senior from Gallatin, Tennessee and a fashion major, said upcycling the police uniforms was a tangible, environmentally-friendly way for students to share their skills and knowledge with others on campus.

“The university police uniforms are about $6 a pound to recycle, so instead, we thought a more sustainable way to give back would be to reuse the uniforms and make something new,” Keith said.

The garments created consisted of purses, tops, pants, jackets and even aprons.

“We started coming up with themes, and everyone went their own direction from there,” Keith said. “We made purses, tops, jackets, and even did some embellishing. Really anything we could do with them, we did.”

In all, between fashion assistant professor Carrie Cox and a few willing fashion students, they completed just under a dozen fashion pieces in a few short weeks. New police uniforms are purchased every few years and can cost as much as $100 each, Cox said. When the new uniforms are purchased, the old ones get thrown away without saving any part of the garment except the police badge.

After officers with the campus police got new uniforms in September, Almo senior Courtney Martin, a student worker with WKU Resource Conservation, reached out to Cox in hopes of generating ideas on how to utilize the large volume of outdated police uniforms.

“Waste is so much more complicated and widespread than people realize,” Martin said. “A lot of what we consider to be trash can be reused, recycled or reduced at the source.”

Martin and Cox started their partnership between fashion merchandising and sustainability last semester during Fix it Fest, another recycling awareness event that takes place at WKU.

Cox said she has a passion for the fashion industry and helping out with this project was enjoyable for her.

“I just have to sew — it’s my compulsion” Cox said. “It took me about 12 hours in total to finish the pieces, but then again, I’ve been sewing forever, so I completed the pieces in about three sewing sessions.”

The completed pieces were displayed at the Earth Day event in hopes that students would be inspired and observe what can be accomplished by simply turning an old item into something new, Keith said.

Lexi Waltz, a freshman from Louisville, said younger fashion students look up to the older students and the skills they have acquired by being in the fashion department.

“We have a lot of talent within our major” Waltz said. “I think it’s inspiring what students here can do.”