From the magazine: What’s your paradise?

In February, while gray clouds seemed to refuse to leave Bowling Green and students settled into the spring semester, the Talisman asked students a question: What’s your paradise?

Caden Dosier sat tucked away in a corner of the Mahurin Honors College as he studied a Russian language textbook in his lap. Dosier, a Gatton Academy senior from Walton, studies Russian and mechanical engineering, both of which are fields that were not in his original plan. When he was 15, Dosier took a trip to Alaska that altered the trajectory of his life. 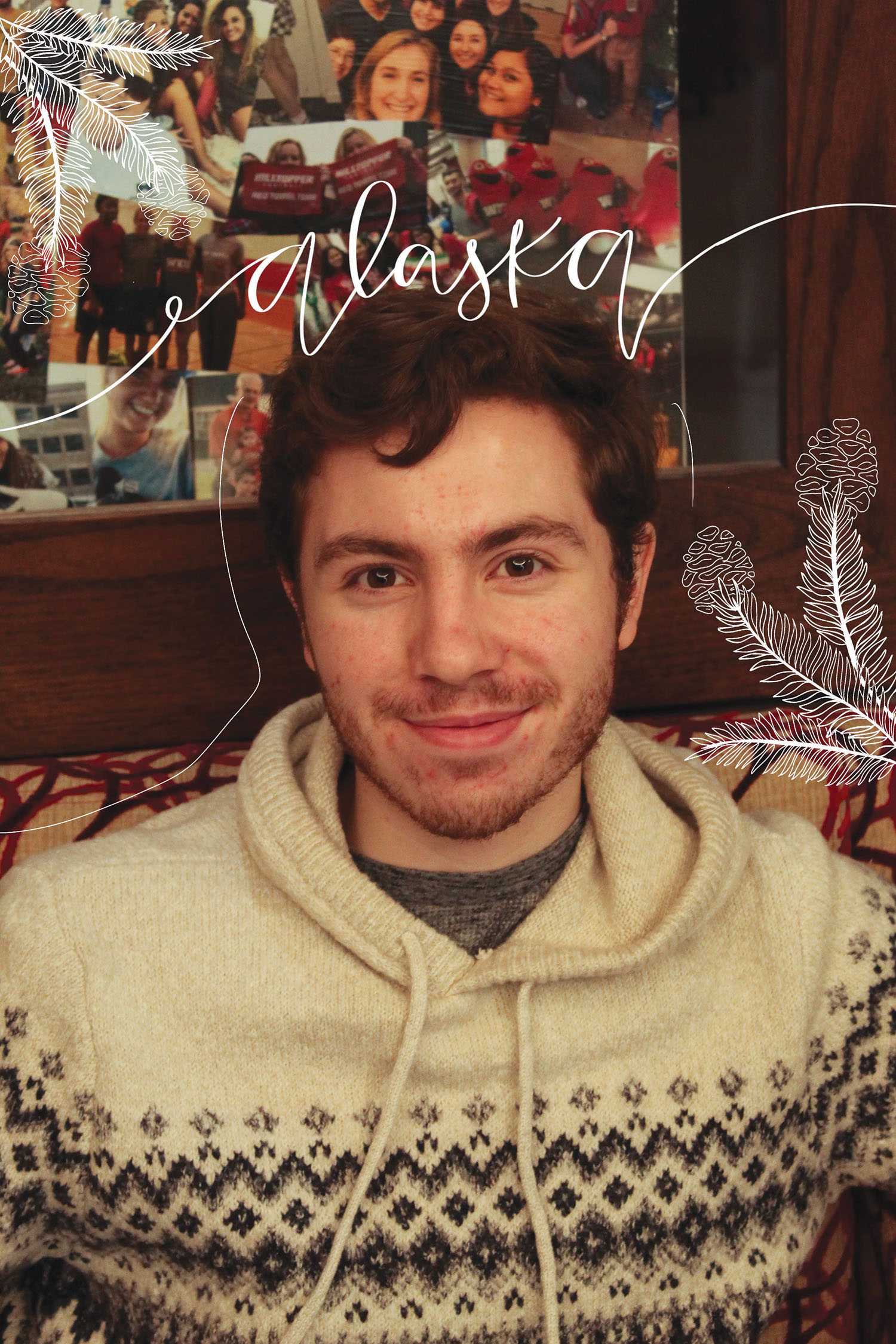 Caden Dosier has been mesmerized with Alaska since he spent a summer break with his relatives in Anchorage, Alaska, as a teenager. A mechanical engineering and Russian major, Dosier said his future goal is to establish more natural forests.

Dosier spent a month that summer with his mother’s second cousins in Anchorage, where he saw things he had never seen before.

Dosier kayaked in the Kenai Fjord National Park, which is located in the southeastern peninsula of Alaska.

“I was in this little, 10-foot kayak just going around these huge oceanic waters,” Dosier said. “Out to the left of me, there were these blue whales just breaching out of the ocean.”

Not only did the wildlife awe Dosier, but the towering trees and glaciers in the national park left a lasting impression on him as well.

Dosier aspires to utilize his education as a mechanical engineer to aid conservation efforts in the Pacific Northwest and Western Canada.

Louisville senior Kenny Ott sat alone in the crowded Downing Student Union Starbucks, gazing at his laptop screen. Baristas shouted names into the crowd; groups of students clustered together, and conversation buzzed around him. As the morning chaos surrounded him, Ott said he would rather immerse himself in nature.

Ott enjoys hiking and camping, which he often does by himself. When Ott is miles away from everyone, he said he can appreciate the freedom it gives him from everyday life.

“Even if you’re with people, there’s limits, you know, people have limits,” he said. “But when you’re by yourself, there’s nothing holding you back.”

Ott said it is sometimes scary to camp alone. Once on a trip to Gatlinburg, he went hiking alone and came across a black bear. Being by himself makes situations in nature more intense because he must rely solely on his own abilities and instincts. 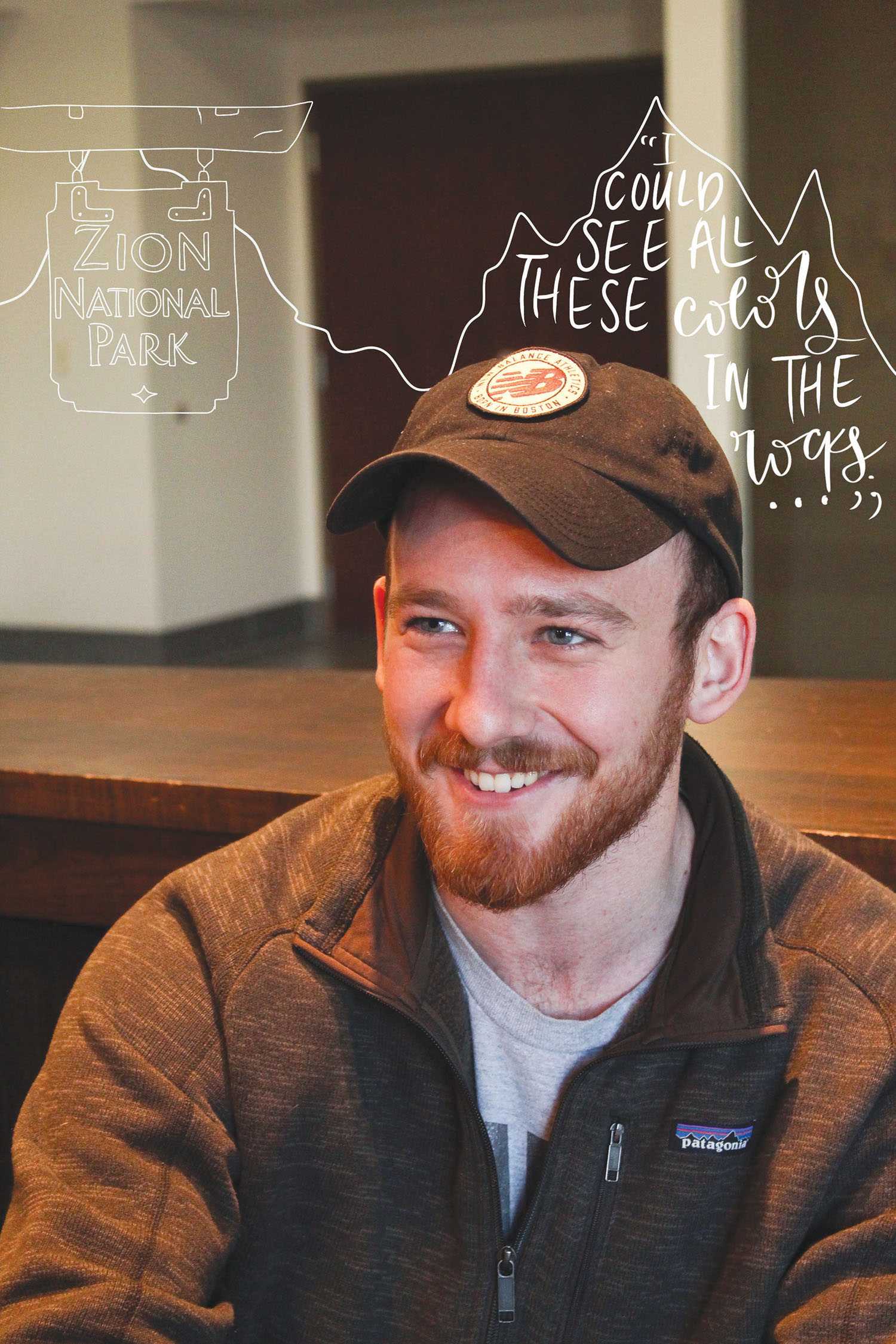 Despite the obstacle of being colorblind, Kenny Ott said he has admired the landscapes he has seen while hiking and camping. He said the view of Zion National Park has made him see in a distinctive perspective. “I could see all these colors in the rocks, and it blew my mind,” Ott said. “That was like the best day of my life, and that’s not an exaggeration.”

Although he likes to camp alone, Ott said the happiest week of his life was traveling and camping with his friends on a spring break trip in 2018. They ventured out west to Zion National Park, Bryce Canyon and the Grand Canyon.

Despite its grand name and reputation, the Grand Canyon was the most underwhelming part of the trip for Ott. He is colorblind, so the colors in the layers of the rock were not as prominent for him as they were for his friends. However, Ott saw Zion National Park in a completely different light.

“I could see all these colors in the rocks, and it blew my mind,” he said. “That was like the best day of my life, and that’s not an exaggeration.”

Ott captured the view with a picture on his phone and set it as his phone’s background, so even though he is hundreds of miles away, he still sees the beauty of Zion every day.

Dancing for a crowd

Cincinnati freshman Renesha Griffin spent her early childhood watching the praise dancers at her church, itching to get up and perform alongside them. Once she reached age 5, Griffin began dancing at her church and has not stopped since.

She said she receives the most recognition for her dancing from people she knows and attends church with and that her favorite performances have been at her church. After performing, she said people come up to her and say they can’t keep their eyes off of her. Others sometimes tell her parents how impressed they are.

She has danced many genres like liturgical dance, also known as praise dance, at her church and ballet in classes as a young girl, but she said hip-hop is the genre that has stuck with her the most. 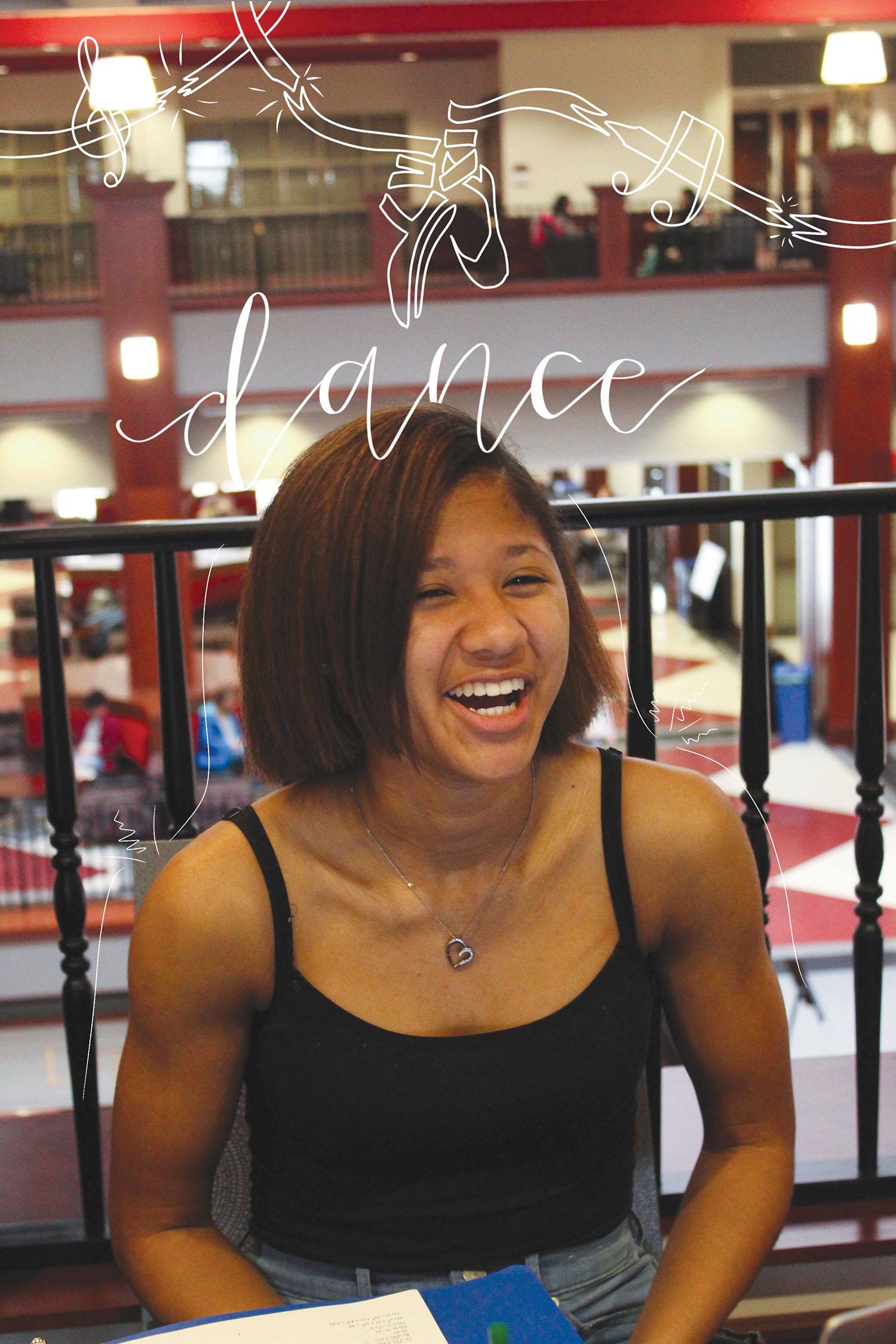 As a dancer, Renesha Griffin enjoys bringing smiles to people’s faces. Griffin said she is most proud of herself when performing in front of an audience or dancing behind the camera on Snapchat. Her current favorite style is hip-hop, but she also enjoys liturgical dance, which is often performed as an expression of worship.

Griffin dances for the WKU Kaois dance team, a hip-hop group formed in 2018 that sometimes performs on campus and at other college campuses.

She said that what brings her the most joy is performing in front of audiences.

“I’m very happy because I’ll be like, ‘I just killed that shit,’” she said.

Griffin said she enjoys dancing with her friends in addition to doing the choreographed dance she is used to.

“I think dancing and hanging out with my friends is what really shaped me,” she said. “I feel like most of my laughter comes from that.”

Sophomore Jade Grabeel was born and raised in Somerset, much like her grandfather, whom she calls Papaw. Aside from a hometown, the two share a love for nature.

Grabeel said she and her 70-year-old grandfather do everything together. They often go hiking and even run 5K races together.

“He’s like one of my best friends,” Grabeel said. “He’s very adventurous.” 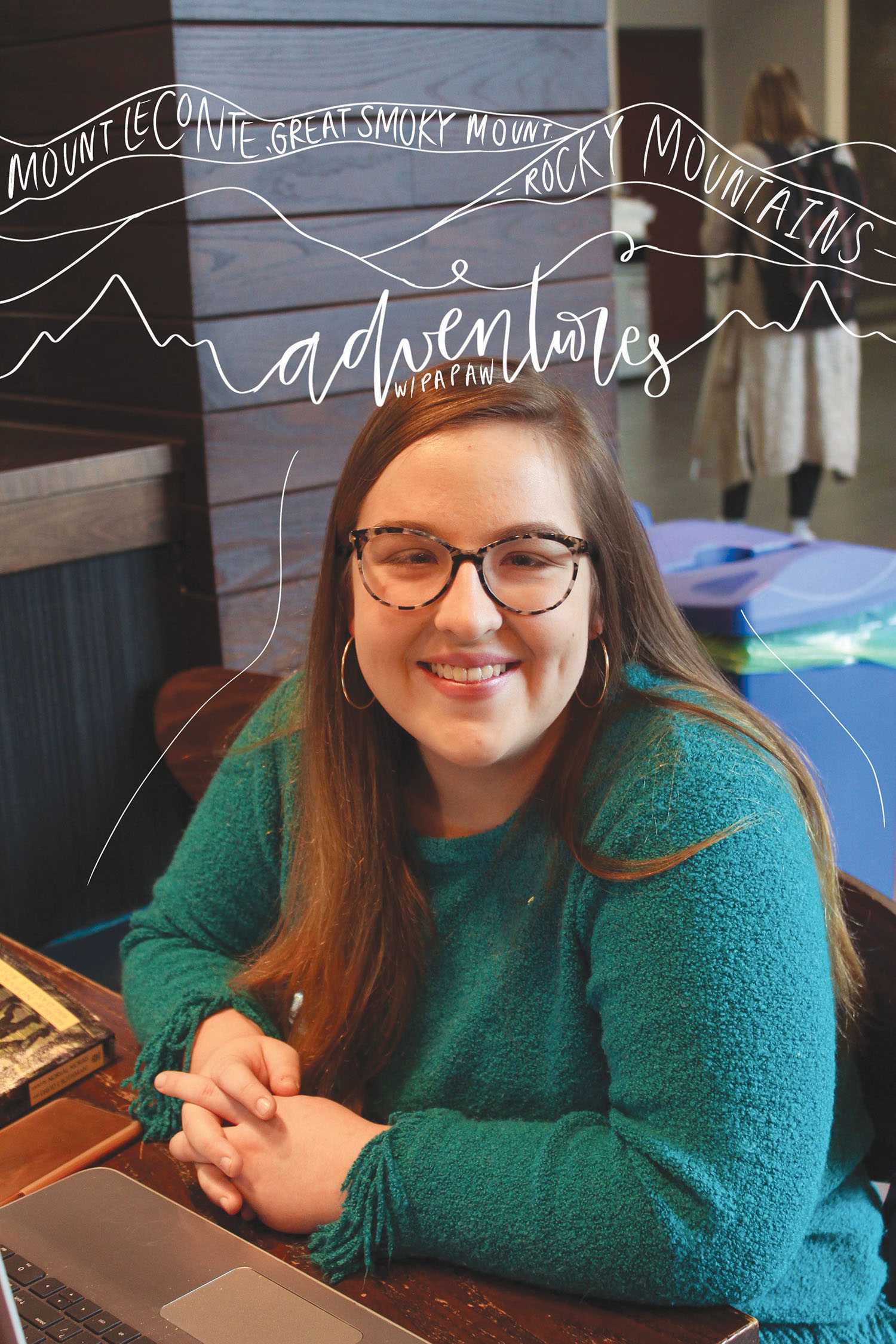 Being 70 years old is not enough to stop Jade Grabeel’s adventurous grandfather from hiking, running and participating in 5K races. Grabeel said the memories she has made with her grandfather bring her joy.

Grabeel’s favorite memory with her grandfather was hiking Mount LeConte in the Great Smoky Mountains two years ago. Together, they trekked to the top of the mountain, which peaks at an elevation over 1,000 feet. Grabeel and her grandfather ate lunch together on the mountaintop before heading back down to stay the night in
a hotel in Gatlinburg.

Along their hikes, Grabeel’s grandfather often gives her advice about how to survive in the wilderness. As an experienced hunter, he has taught her how to identify different types of trees, recognize animal tracks and navigate cardinal directions.

Grabeel’s grandfather also advises her on navigating her life, encouraging her never to take the easy way out.

“It’ll teach you more about who you are as a person rather than just sliding by,” Grabeel said.