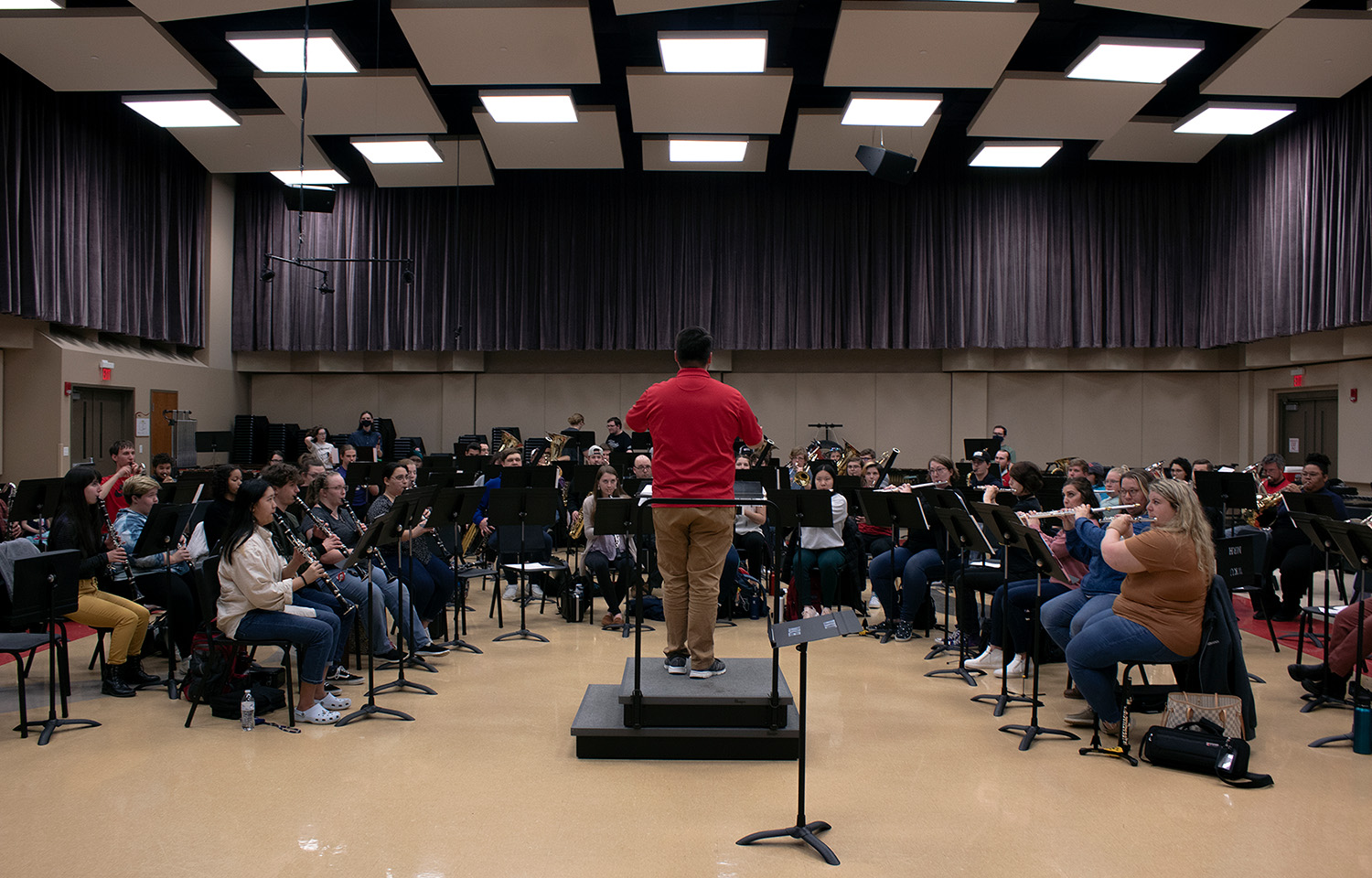 Patrick Sweazy, a graduate student, conducts the band during their rehearsal on March 7. (Photos by Ragan Harrington)

WKU’s Campus Community Band offers area musicians an opportunity to participate in a musical environment, whether they are students or not.

The band meets during the spring semester on Mondays from 6:30 p.m. to 8:30 p.m. in the Music Rehearsal Hall.

Patrick Sweazy, a graduate student from Taylorsville, said that students are encouraged to join the ensemble for extra credit hours, but the community is invited as well.

“It’s encouraging to see so many people that want to come together to make music every week, especially the community members that are out living their adult lives,” Sweazy said.

Sweazy said he joined the band while obtaining his bachelors degree to experiment with a different instrument than what he played in the university ensembles.

As the graduate assistant, Sweazy said he is now one of the conductors of the group.

“I’m constantly being allowed the chance to practice my craft as a conductor and as a music educator to the ensemble,” Sweazy said.

In order to choose potential pieces for the band to play, Sweazy said he takes skill level into consideration. He said the goal is to provide a piece that is entertaining and stimulating to the members without being too difficult.

“These players are in the group to have fun, so I have to be the one to bring the fun,” Sweazy said.

Avery Cunningham, a sophomore from Carmel, Indiana, said the band is given the potential pieces to sight read.

If the group likes a piece and the sight reading goes well, then the piece is kept, Cunningham said.

Darrell Montgomery, a freshman from Bowling Green, said he enjoys how the band explores music.

“It challenges me to work on my skills and improve,” Montgomery said.

Montgomery said he discovered the community band when searching for another credit. He began as a percussionist during the second semester of his first year.

Cunningham said she joined during her freshman year after the marching band season was over.

As an exercise science major, Cunningham said she appreciated having an outlet for her musical passion.

“I guess you could call it my band fix,” Cunningham said.

Because instruments are expensive, Cunningham said the community band gave her the option to rent from WKU.

“I’ve been playing the bassoon since sixth grade and I just want to continue that,” Cunningham said.

Cunningham said that there are many music majors or minors who join to learn a secondary instrument.

Students can feel comfortable during their learning process because the community band is less strict than a competitive band, Cunningham said.

“It’s a lot more relaxed and laid back, which I really enjoy,” Cunningham said.

Sweazy said that there is no assigned seating with the group, so it’s possible to be sitting next to someone new each week.

This opens up the possibilities for conversation and relationship building with others, Sweazy said.

Montgomery said he enjoys the new friendships he has because of the community band.

There are about 80 members currently in the band, Montgomery said.

In a group that large, networking is absolutely possible, Sweazy said.

“There are no assigned seating with the group so it’s possible to be sitting next to someone new each week,” Sweazy said.

This opens up the possibilities for conversation and relationship building with others, Sweazy said.

The relaxed atmosphere has not hindered progress, and Sweazy said the band improves during each rehearsal.

The enthusiasm and willingness to perform and make music makes the process much easier, Sweazy said.

Through the exploration with the band, Montgomery said his musical experience has expanded and he has grown to be more musically inclined.

“I’d like others to know you can do anything with a good attitude and good intentions,” Montgomery said.

The community band will turn no one away from the opportunity to create music, Sweazy said.

“No matter how many rehearsals we’ve had so far, others are welcome to come join,” Sweazy said.