Like everything else, WKU’s 2020 Homecoming week looked a lot different than ever before. There was no pomping to be done for massive parade floats and no tailgating events to attend, but a couple of the most loved and traditional events still took place. WKU hosted the Marshall University Thundering Herd for the annual Homecoming football game on Saturday, Oct. 10. Instead of Homecoming Queen candidates taking the field during halftime, the ceremony was held separately for the candidates and their families on the day before the game. Talisman photographers captured the enduring spirit of Homecoming in these images below. 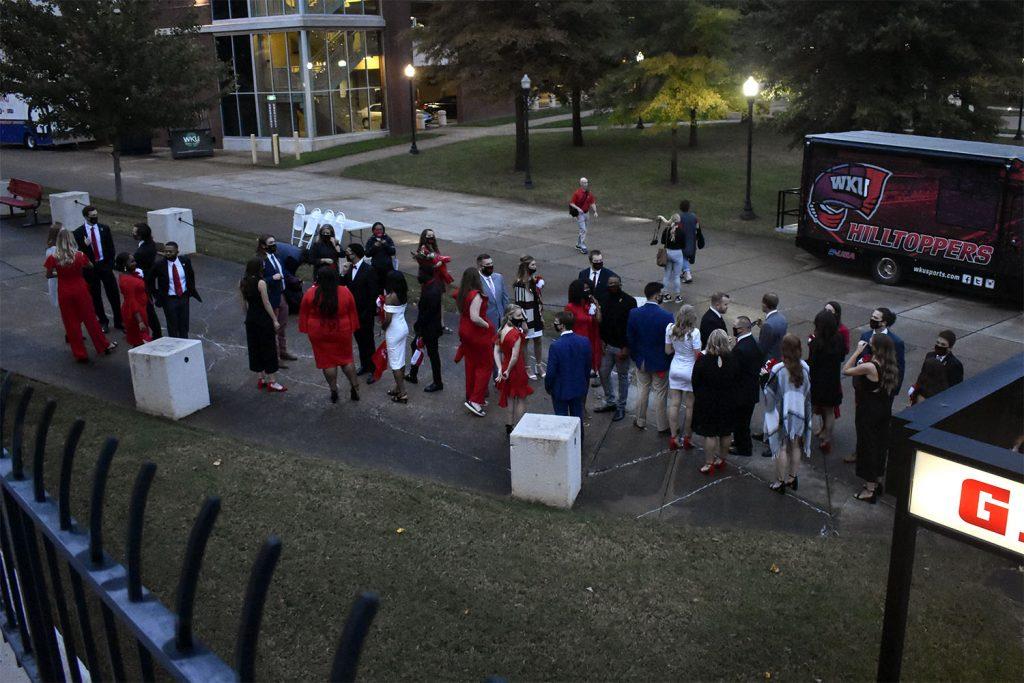 Before the 2020 Homecoming Queen Ceremony, held on Oct. 9, candidates and their escorts lined up outside Houchens-Smith Stadium preparing to enter. “The court this year was made up of some of my dearest & closest friends, each of whom would be incredible representatives of the Queen title” said 2020 Homecoming Queen Sarah Harne. (Photo by Veronica Teeter) 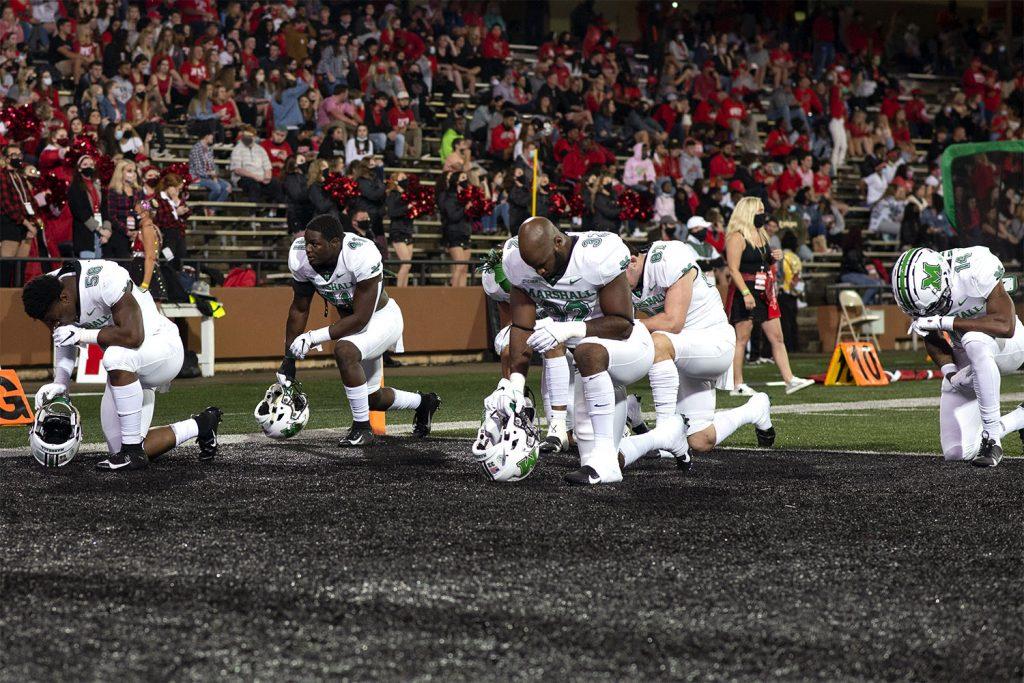 Marshall University players pray before the start of the WKU’s Homecoming game on Oct. 10. The Marshall Thundering Herd had a decisive victory over the Hilltoppers, with a final score of 34-14. (Photo by Tucker Covey) 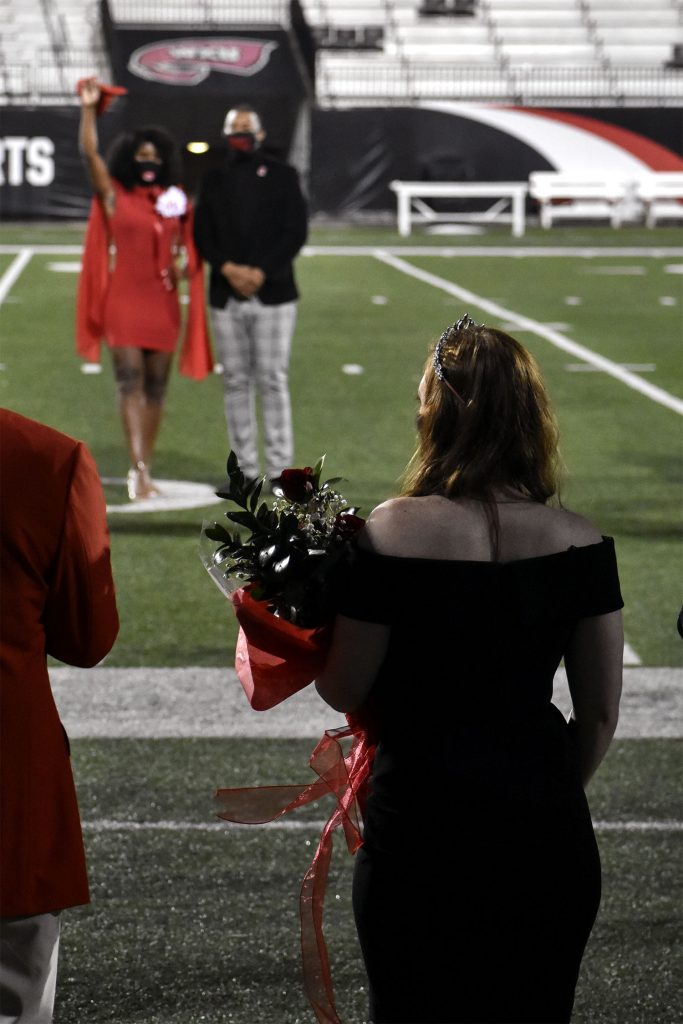 2019 Homecoming Queen Allyson Taylor watches as 2020 homecoming queen candidate Jazzlin Hamilton waves her red towel alongside escort Maxwell Brown during her introduction. “[Homecoming] is such a great tradition at WKU and is an honor to be a part of, regardless of winning the title or not,” Taylor said. “Just the opportunity to be a part of the ceremony and walk across the field where people are cheering you on is a humbling feeling. This year, was a little different, but nothing short of special.” (Photo by Veronica Teeter) 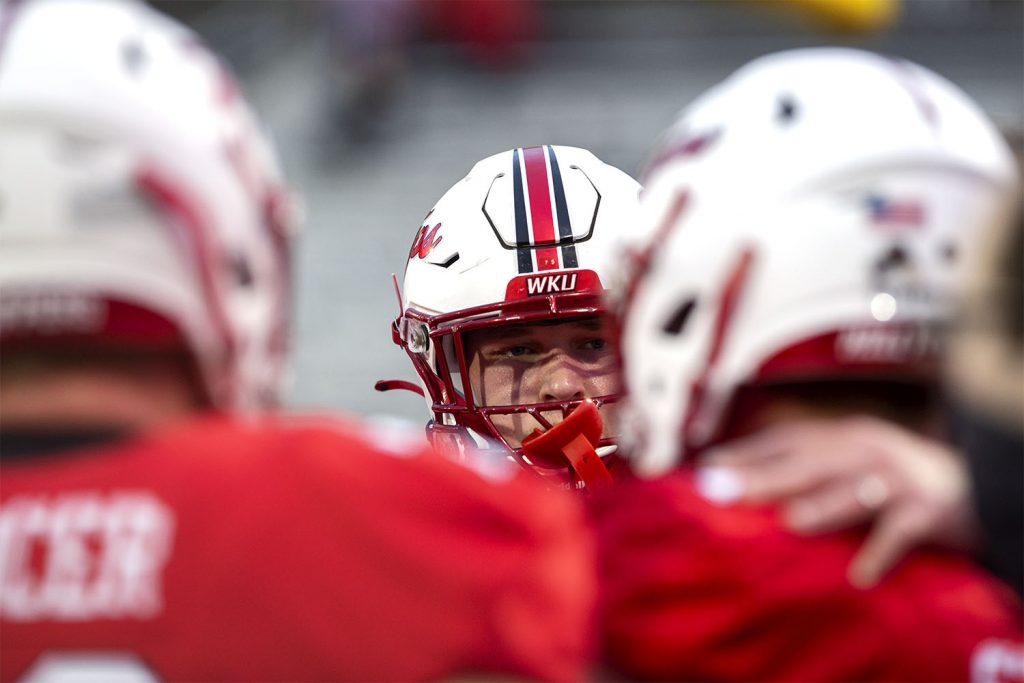 Hilltopper defensive players huddle together before joining the rest of the team in the locker room shortly before kickoff on Oct. 10. Marshall University proved to be a challenge on both the defensive and offensive front during their bout with WKU.(Photo by Tucker Covey) 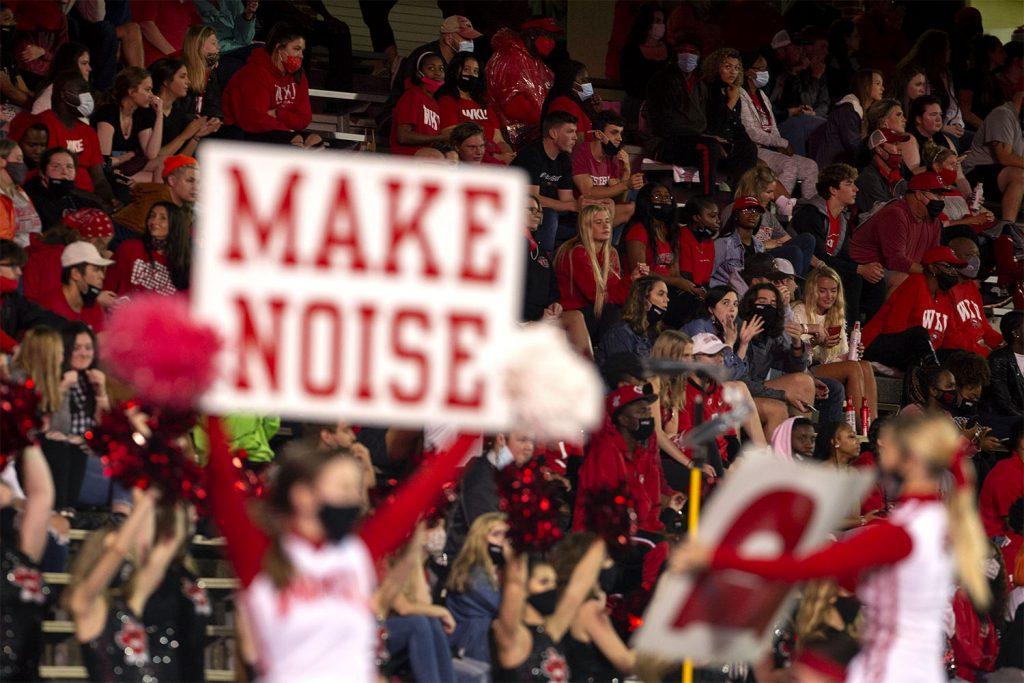 WKU cheerleaders, dance team members and fans watch the Hilltoppers during their Homecoming game with the Marshall Thundering Herd on Oct. 10. Hardly any Marshall fans could be seen throughout Houchens-Smith Stadium, while WKU fans showed out despite the rain. (Photo by Tucker Covey) 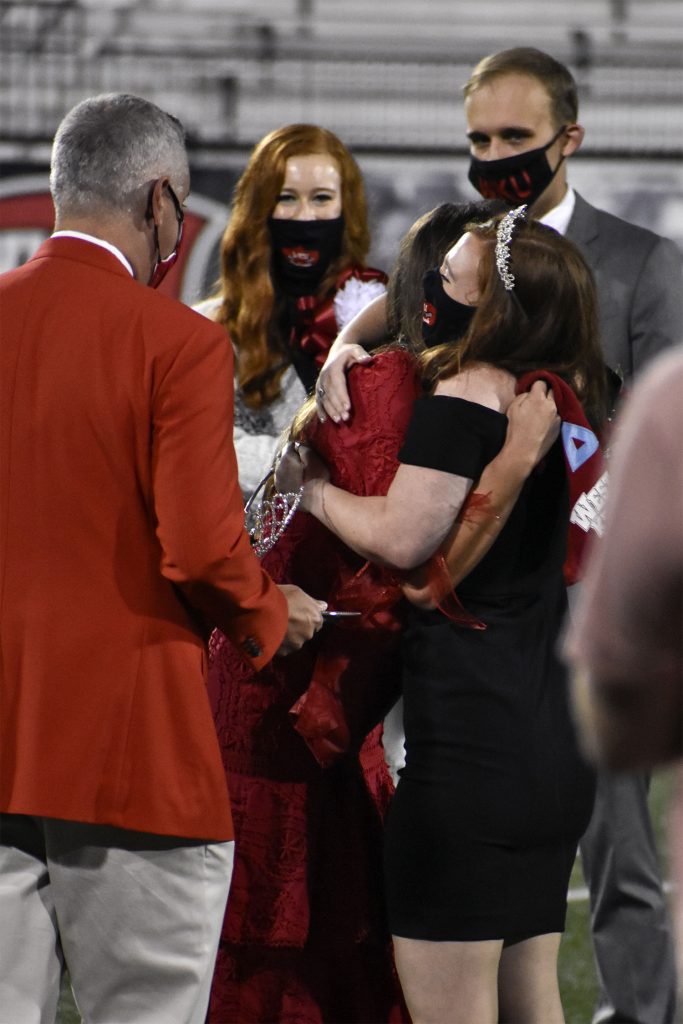 Newly announced 2020 Homecoming Queen Harne hugs 2019 Homecoming Queen Taylor in excitement. “Sarah is the perfect homecoming Queen because she truly embodies the spirit of WKU,” Taylor said. “She has never met a stranger and when you meet her, she makes you feel like you matter.” (Photo by Veronica Teeter) 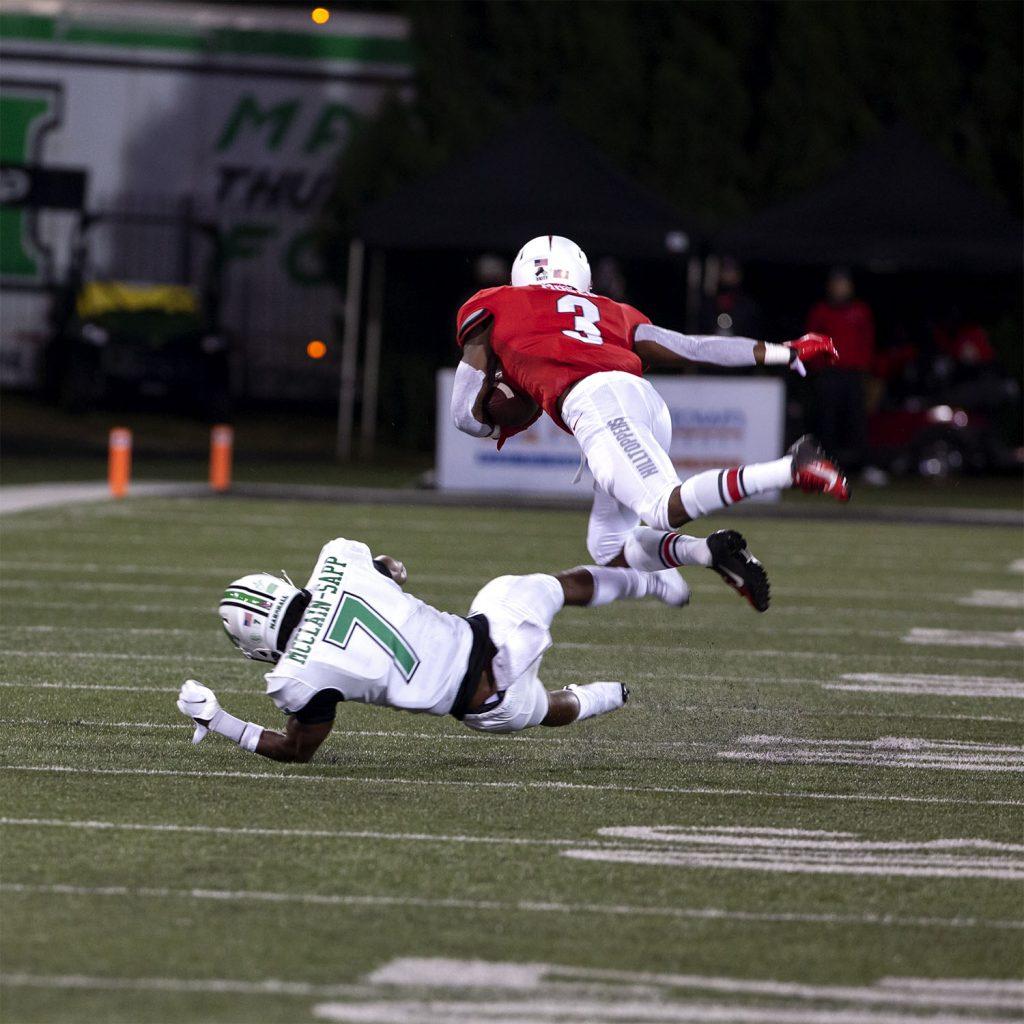 Junior running back Jakairi Moses avoids a collision with Marshall defensive back Jaylon McClain-Sapp during the Homecoming game on Saturday, Oct. 10. The Thundering Herd shut down the Tops defensively with a final score of 34-14, being WKU’s first Conference-USA loss of the year.(Photo by Tucker Covey) 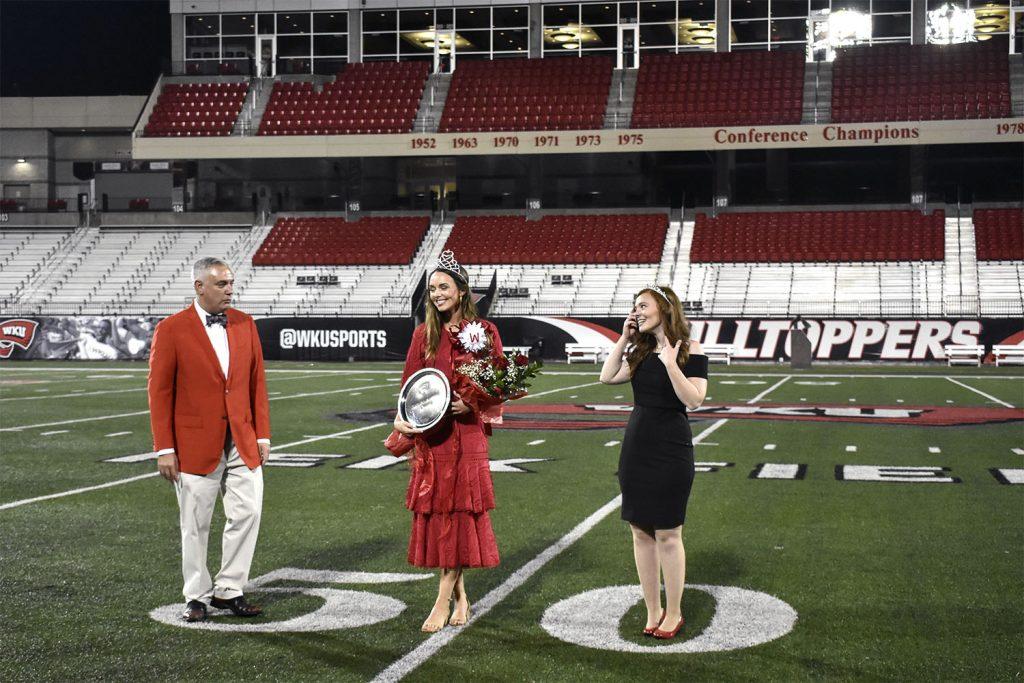 (From left) WKU President Timothy Caboni, Homecoming Queen Harne and last year’s Homecoming Queen Taylor after the crowning ceremony for WKU’s 2020 Homecoming on Oct. 9. “I admired every woman that would run for Homecoming Queen,” said Harne. “They were some of my biggest role models on campus year after year. Whenever the time came that I could potentially be on the court, I wanted to believe I had grown into one of those women. Being nominated to represent Alpha Delta Pi meant people believed in me and that’s a pretty special feeling.” (Photo by Veronica Teeter) 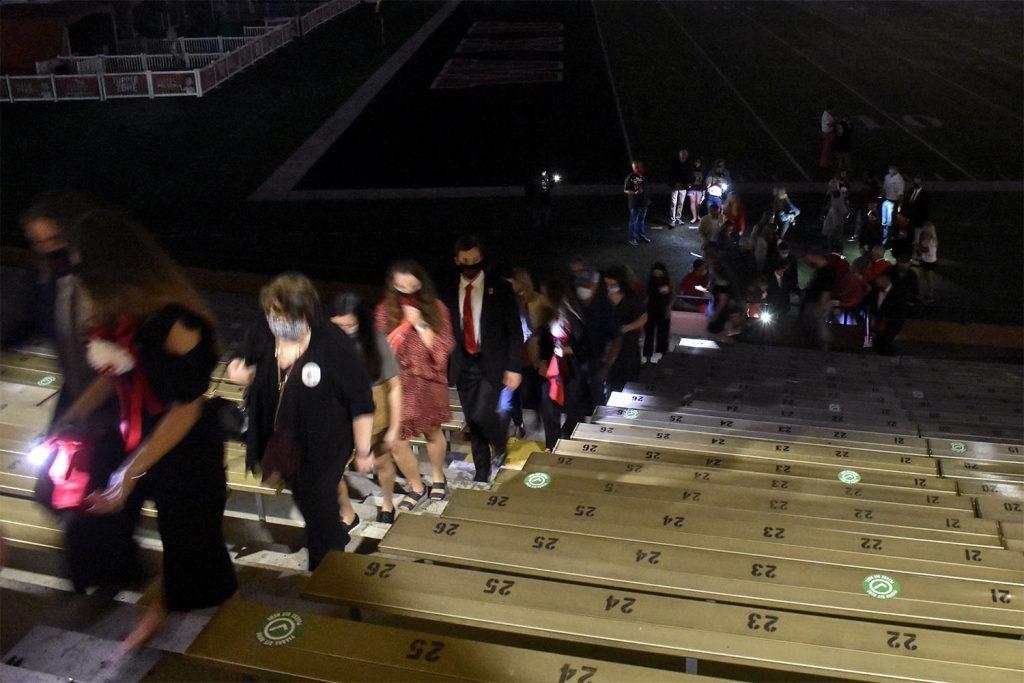 Before the ceremony began, the Homecoming court was informed that each candidate would be introduced and then third place, second place and finally the 2020 Homecoming Queen would be announced. Candidates and their family members had fifteen minutes for photos on the field. After the fifteen minutes, the lights were shut off and everyone was required to leave. (Photo by Veronica Teeter)