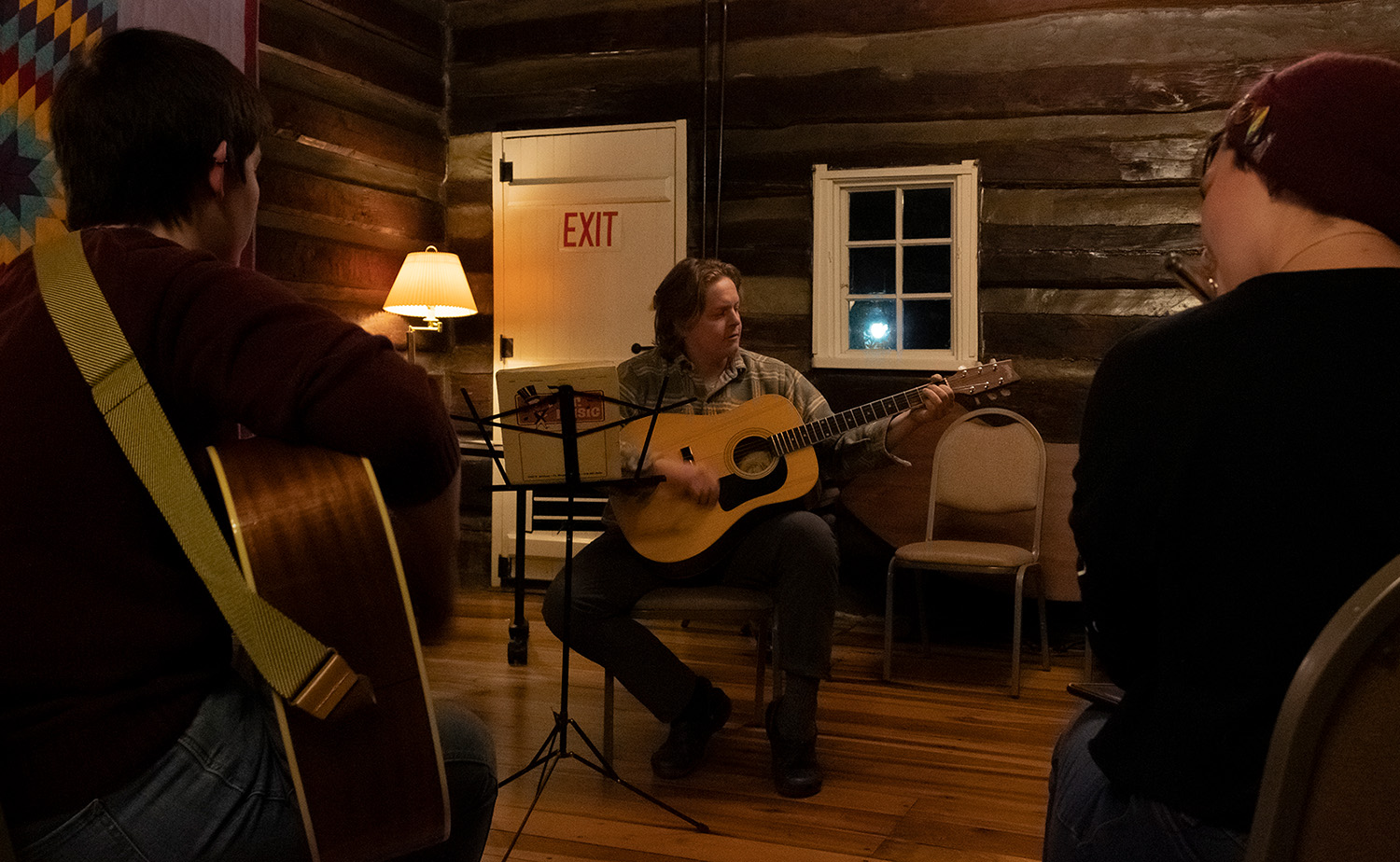 The Log Cabin Jam Session takes place the first and third Tuesday of every month in the Pioneer Log Cabin next to the Kentucky Museum on campus. (Photos by Ragan Harrington)

The Kentucky Folklife Program hosted the Log Cabin Jam Session Tuesday, Nov. 15 to give student musicians the opportunity to create a community. There were jam sessions at the Pioneer Log Cabin before the pandemic, but this is the first semester they have been offered since then.

Joel Chapman is the Kentucky Folklife Program specialist at WKU. He said he leads the jam session and that he is supported by the department of folk studies and anthropology.

A jam session consists of musicians seated in a circle taking turns choosing songs to play together, Chapman said. This setup helps students to work as a group in a relaxed atmosphere.

“It’s vague, it’s broad. That’s kind of what I’m going for,” Chapman said. “I don’t want it to be pigeon-holed from the start.”

Chapman said structured bluegrass jam sessions took place at the Pioneer Log Cabin before ending due to the pandemic. He said he decided to bring back the jam sessions but opened them up to more genres in addition to bluegrass music.

Chapman said he hopes for the group to grow and create a repertoire of music. He said that having four or five people who know songs that are often played could help the sessions become more fun for everyone involved.

Chapman comes prepared with several songs to play for the group on his guitar and trumpet and said he also writes down some of the songs that students play. He said this process helps him to begin creating a setlist for the group.

Katie Bennett, from Frankfort, is in her first year of the folk studies master’s program and saw the poster for the jam session on the folk studies’ social media accounts.

Bennett said she attended one of the jam sessions before the pandemic and enjoyed it, so when she saw the poster for this semester, she said she thought it could be fun.

As an on-and-off guitarist for the past 12 years, Bennett said she hopes the jam sessions will lead to consistency in her practicing.

Bennet said she enjoys the low-pressure environment in the cabin. Anyone at any level can participate with an instrument or vocals, Bennett said.

“Everyone can just join in and do the best they can,” Bennett said.

She said anyone can suggest songs they have been enjoying on their own. While everyone has different tastes, Bennett said the jam session is an opportunity to share styles between musicians.

Kassius Johnson, a junior from Lebanon, Missouri, attended the jam session with Bennett.

“I figured whatever Katie was gonna drag me to was going to be interesting,” Johnson said.

“I just wanted a chance to play my instrument again because I used to play it a lot,” Johnson said.

During the jam session, Johnson said they liked trying out a new style. They said they weren’t professionally trained to play blues music but tried it out while playing with the group.

“I’m not used to not being good at things, but I didn’t feel threatened by that. I just had fun,” Johnson said.

Johnson said they will work on improving their ability to play along with other musicians so they can do more solo work at the next jam session.

Johnson said they also got the opportunity to play songs they normally wouldn’t get to play with a group. Since everyone got a turn, they were able to suggest whatever they liked. Johnson said they particularly enjoyed playing a song from “The Legend of Zelda.”

Bennett said she will invite others to help the group grow.

“I just hope it continues as much as possible, and I hope to get more people to come with me,” Bennett said.

The Log Cabin Jam Session session began this semester and occurs on the first and third Tuesday of every month at 6:30 p.m. The event is free and there is no registration.

Chapman said he didn’t want to schedule a session in December because of finals week. Instead, the last session for the fall 2022 semester will be held on Tuesday, Nov. 29, 2022.