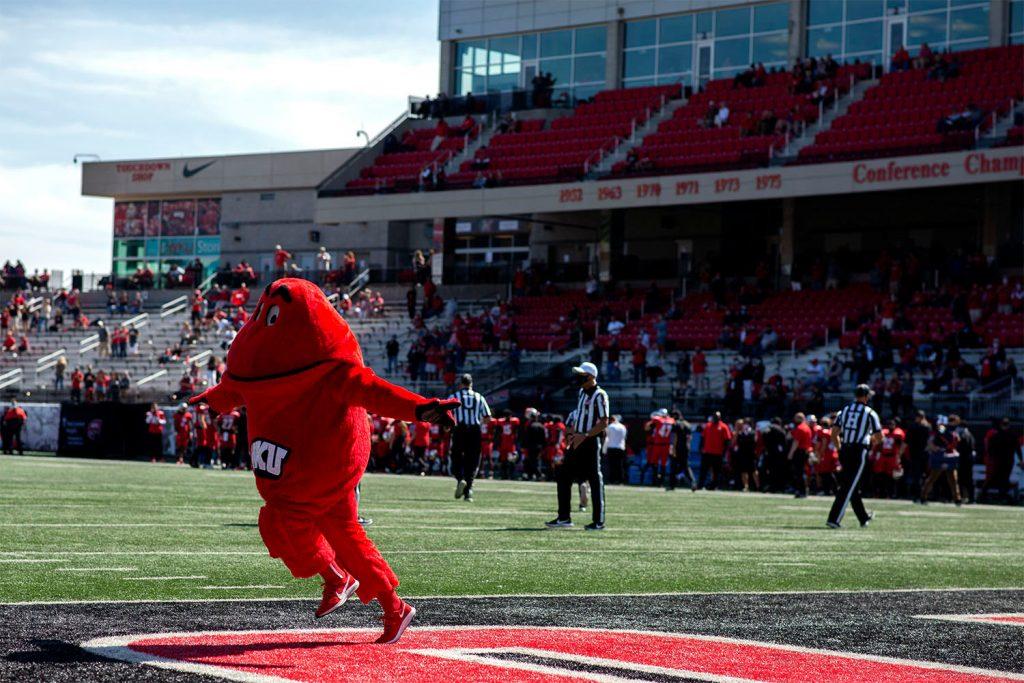 Big Red celebrates a WKU touchdown at the first football game of the season. The iconic mascot can typically be seen running around the field on game days, and sometimes stunts with the cheerleaders. (Photo by Tucker Covey) 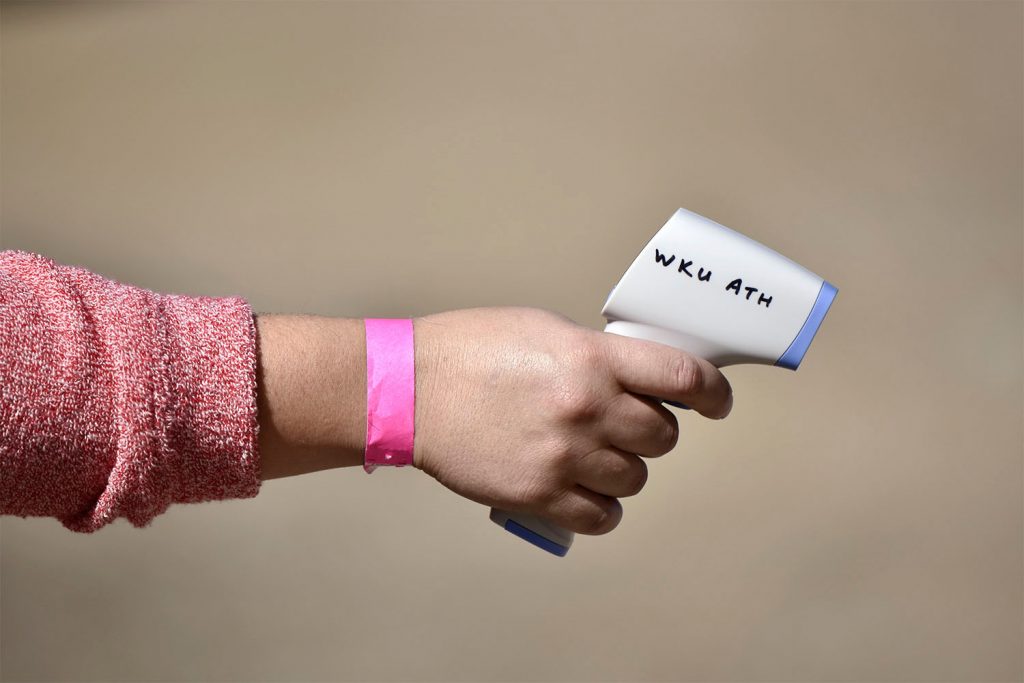 Before entering the stadium, fans had their temperature checked. There were separate stations at each gate upon entrance: temperature check, ticket check and security. Students had to reserve seats through the new Red Wave app, and have their ticket open on the app before entering. (Photo by Veronica Teeter) 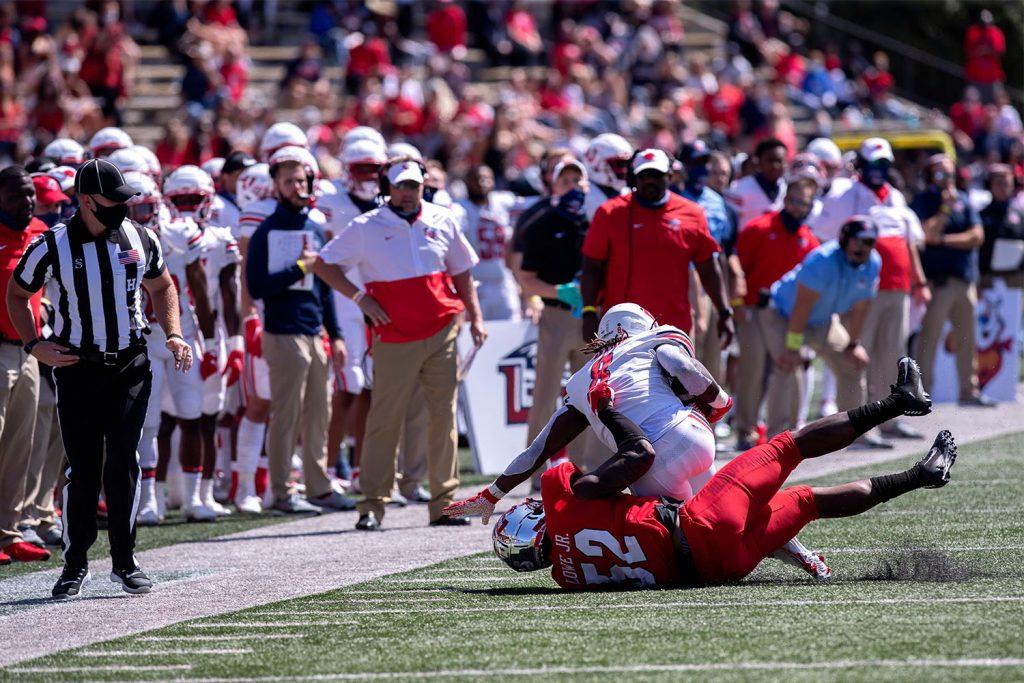 Liberty University senior running back, Joshua Mack is tackled by WKU redshirt senior linebacker Damon Lowe, Jr. at the Liberty sideline. The Hilltoppers were ultimately defeated by the Flames with a final score of 30-24. (Photo by Tucker Covey) 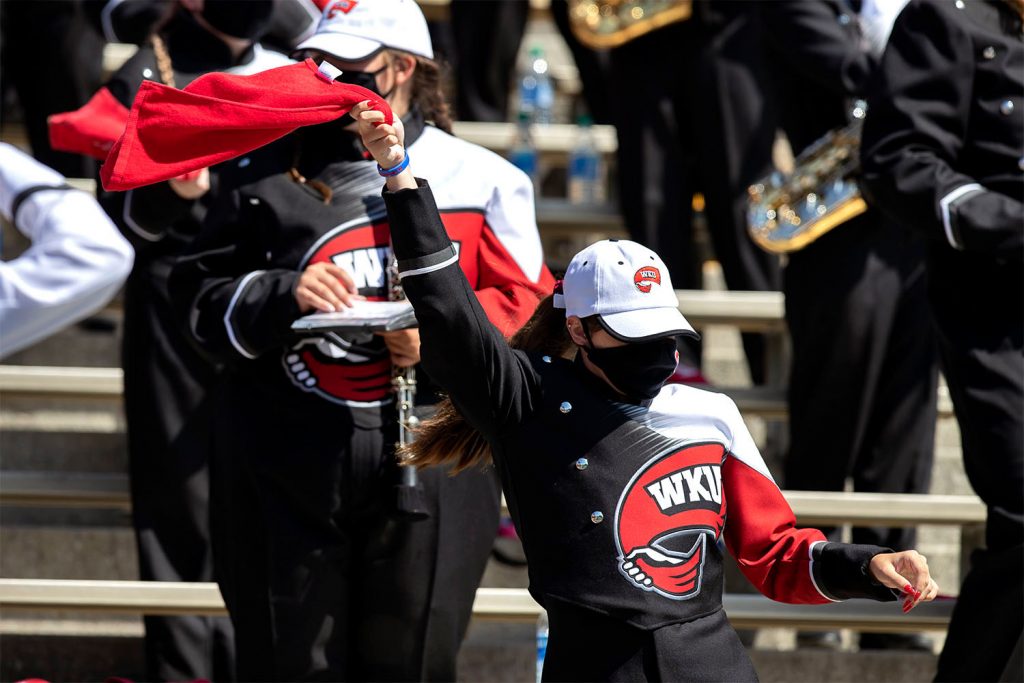 A WKU band member raises the classic red towel in celebration at Houchens-Smith Stadium. Aside from playing their instruments, the band members are often vocal, cheering for the Hilltoppers and jeering at the opponents. (Photo by Tucker Covey) 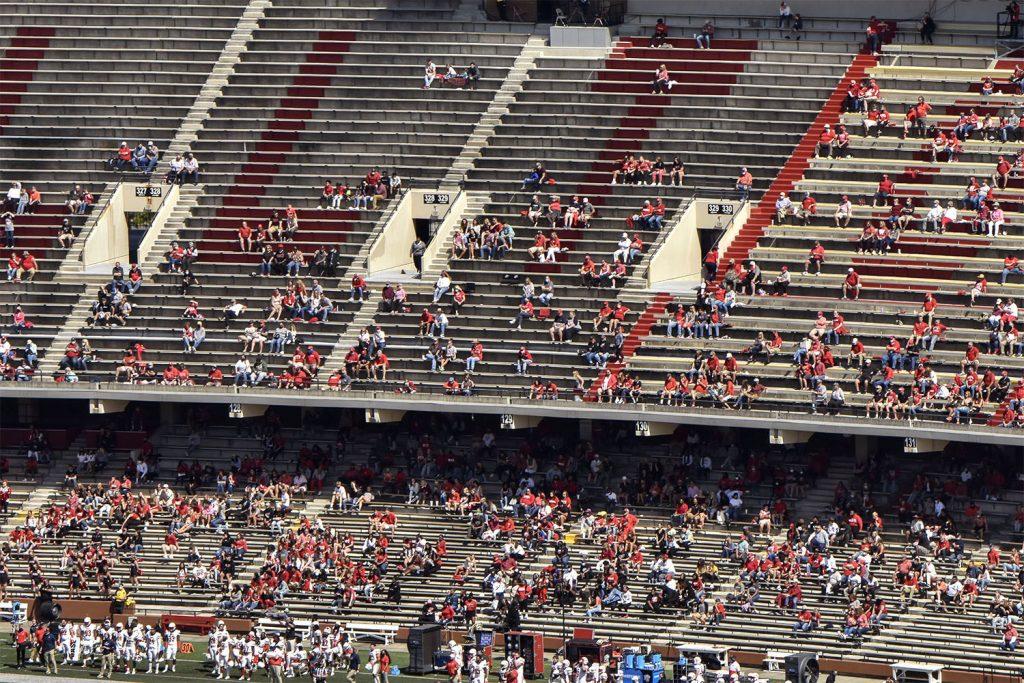 Fans at the game were highly encouraged to wear masks and practice social distancing. Houchens-Smith Stadium was only allowed to fill to 20% capacity, meaning a maximum of 5,000 people were allowed into the stands. (Photo by Veronica Teeter) 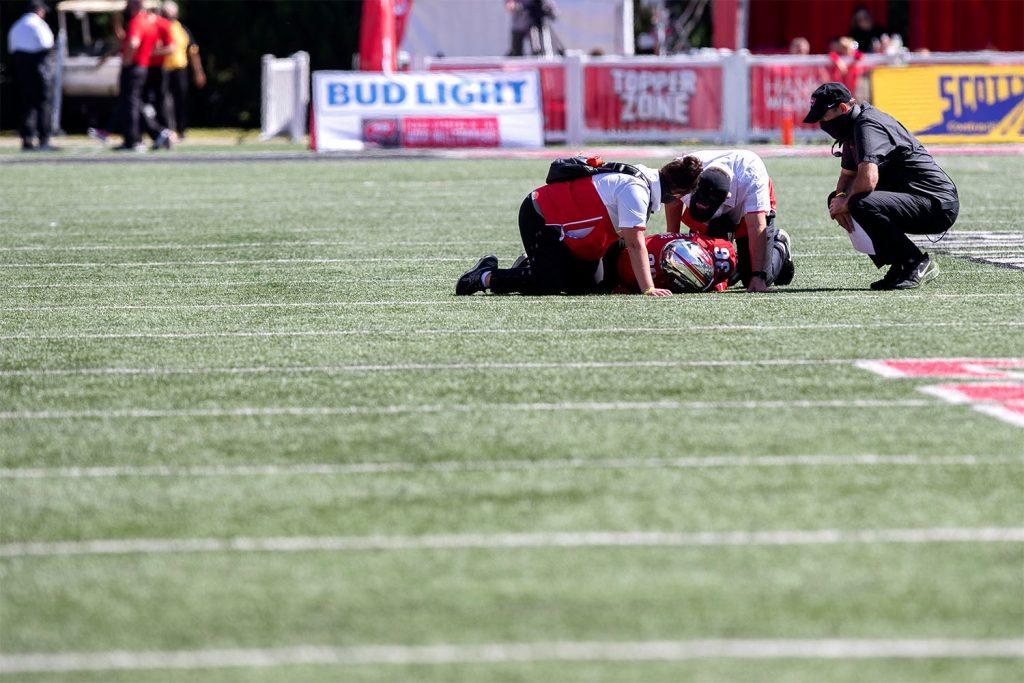 WKU senior linebacker Kyle Bailey is checked by team personnel after a hard hit. Bailey eventually got up and walked off the field on his own to cheers from the crowd. (Photo by Tucker Covey) 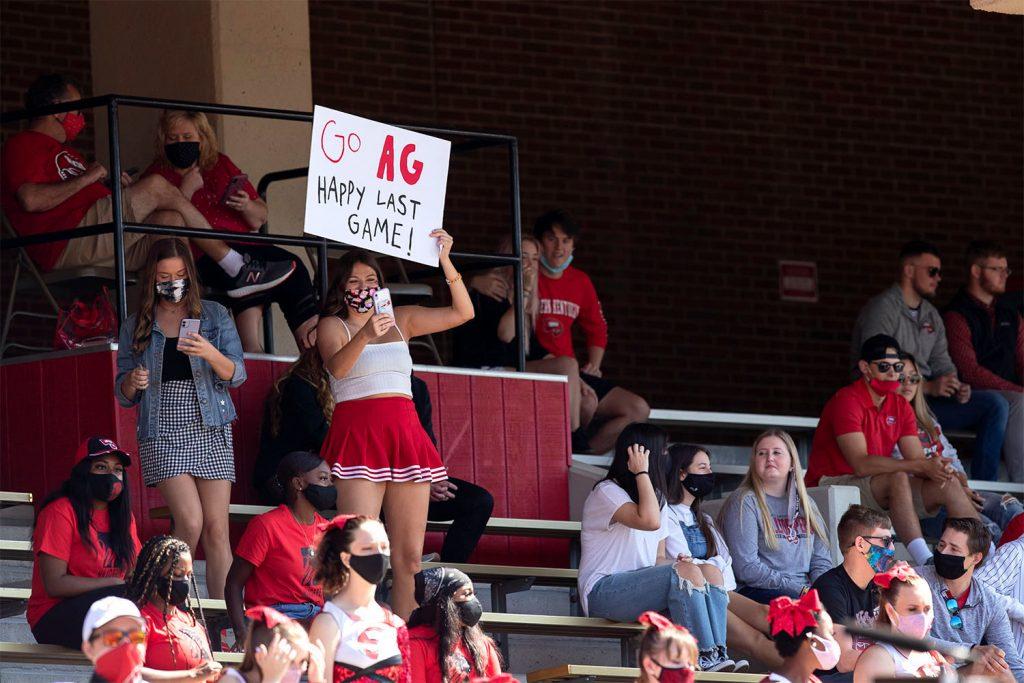 Students and fans cheer from the stands during the first WKU football game of the season against Liberty University on Sept. 19, 2020. Social distancing and masks were encouraged, but not required. Students had to reserve their tickets ahead of time. (Photo by Tucker Covey) 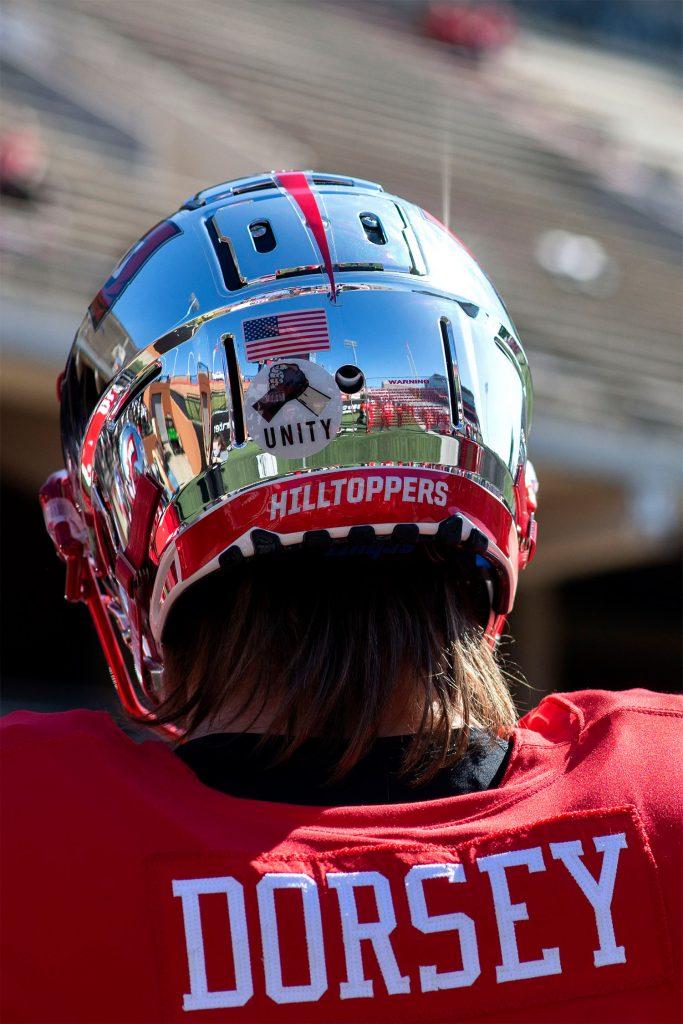 WKU redshirt freshman Wes Dorsey displays a unity sticker on his helmet before the game. All players on the WKU football team displayed these stickers in support of Black Lives Matter. (Photo by Tucker Covey) 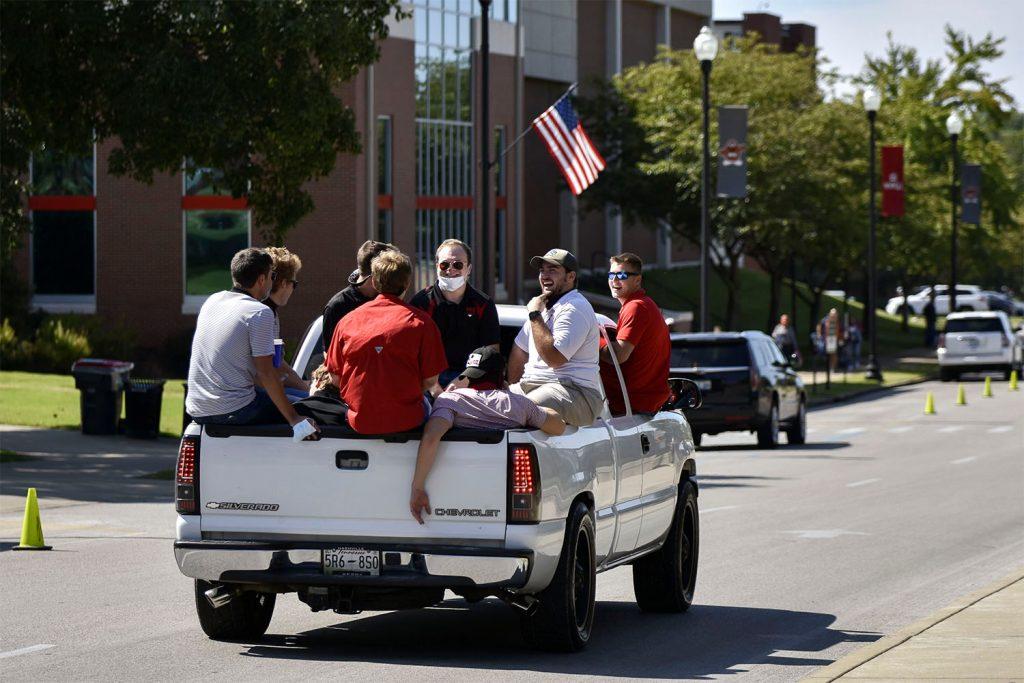 WKU football fans drive down Avenue of Champions in a truck near the start of the game. Fans found creative alternatives to tailgating that helped prevent large crowds. (Photo by Veronica Teeter)