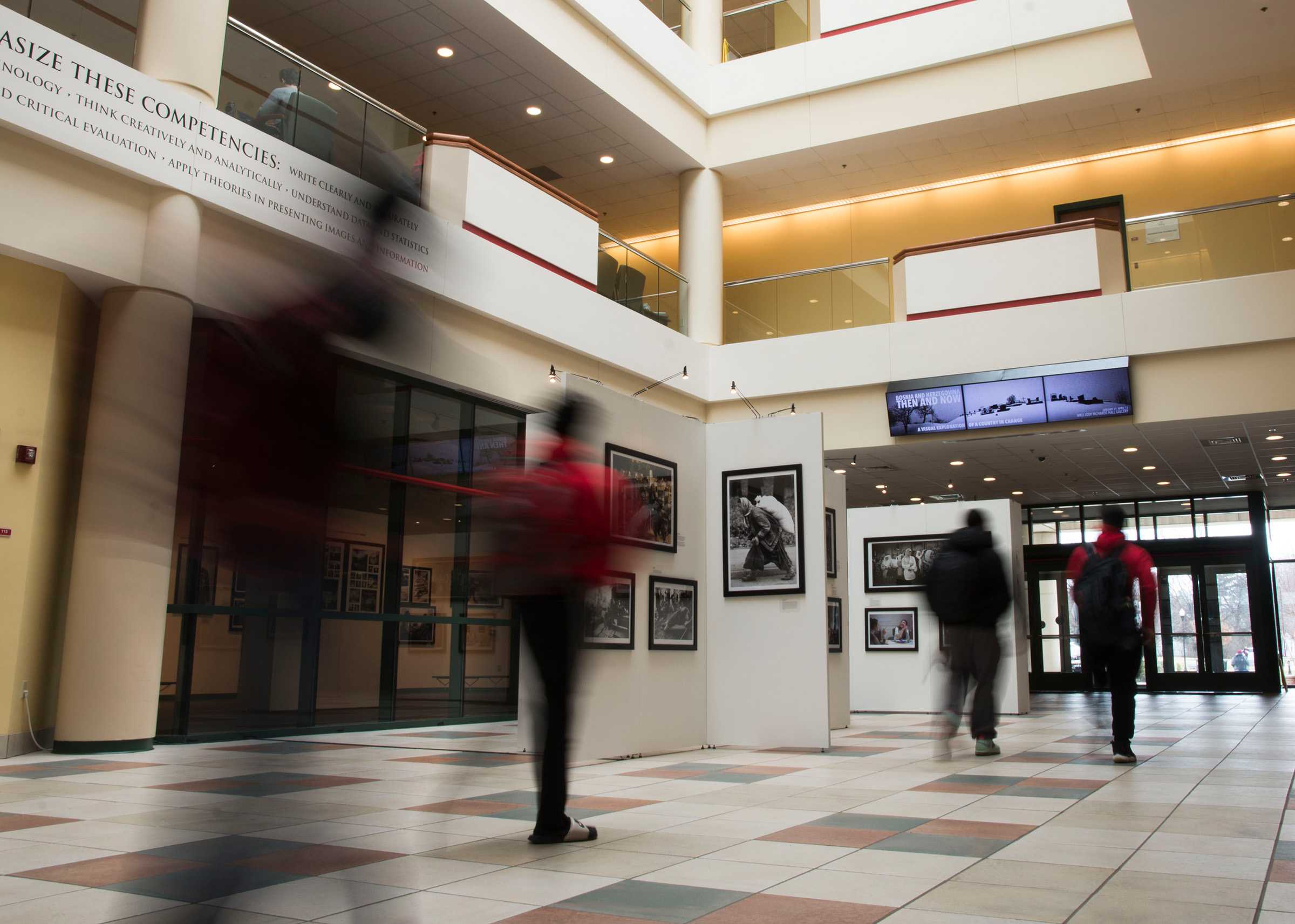 WKUPJ community grapples with sexual misconduct in the photojournalism field

In the wake of the #MeToo Movement and instances of sexual assault in the photojournalism field, WKU photojournalism students, professors and alumni are grappling with the issue of sexism in their chosen field.

Sparks said she’s glad to see men being exposed and held accountable for their actions.

This reckoning was impelled by investigations into two prominent photojournalists. In January, Vox reported that Patrick Witty, a 1996 alum of the WKU photojournalism program, quietly departed from his position as deputy director of photography at National Geographic. His departure came after women who worked for the publication pressed their human resources department to investigate what they viewed as inappropriate sexual behavior from Witty.

Months earlier, in May 2017, Calla Kessler, a senior at the University of Nebraska-Lincoln, filed a Title IX complaint against prominent photojournalist and former visiting professor Bill Frakes, who had worked with WKU students in the past to shoot the Kentucky Derby. Bardstown junior Skyler Ballard testified against Frakes during the investigation, alleging he acted inappropriately when she worked with him at the Derby. Last August, an Omaha World-Herald article reported that Frakes would not be returning as an adjunct professor at the University of Nebraska-Lincoln. According to the article, the Title IX investigation found that Frakes had made comments about women’s bodies. This came after Frakes’ website claimed he’d lectured at more than 100 universities, according to the National Press Photographer Association.

In late July 2017, the NPPA added a statement to its code of ethics that said, “Do not engage in harassing behavior of colleagues, subordinates or subjects and maintain the highest standards of behavior in all professional interactions.” In a July 27 article announcing the change, Alicia Calzada, former NPPA president and a current legal counsel to the organization who drafted the clause, said she was glad the board agreed there is no room for harassment in the photojournalism profession.

Following these controversies, we spoke to members of the photojournalism community at WKU and beyond about the reality of sexual harassment in the industry.

“Someone literally told me to wear loose clothing. I thought, ‘What the hell am I getting myself into?’”

The controversies surrounding Witty and Frakes didn’t come as a surprise for some WKU students.

In May 2017, when Ballard told her peers about the opportunity to shoot the Derby with Frakes, she said she was told to watch her back.

“Someone literally told me to wear loose clothing,” Ballard said. “I thought, ‘What the hell am I getting myself into?’”

Ballard said soon after she, Kessler and two other WKU photojournalism students arrived to shoot with Frakes, he told them that if they messed up, he could end their careers.

Katie Klann, a staff photographer for Naples Daily News in Florida, had also witnessed inappropriate behavior from Frakes in the past. She worked with him as an intern in Jacksonville after she graduated from Ohio University in 2016.

“I was 21 at the time, and to call out the 60-year-old photographer to his face was, in my mind, impossible,” Klann said.

However, Kessler wrote in an email that she felt an obligation to come forward about Frakes’ inappropriate behavior.

“It was time for a bully to be taught a lesson and made an example out of,” Kessler said in the email.

Similarly, Justin Gilliland, a 2017 WKU photojournalism graduate, said he hadn’t been surprised by the controversy surrounding Patrick Witty. He traced this back to Witty’s involvement in WKU’s Mountain Workshops, a yearly week-long workshop in which students and professional photojournalists work to develop their skills in areas such as video storytelling and photography.

“I thought, ‘He’s really well established. Is he really trying to learn video?’” Gilliland said. “It was just kind of bizarre that he was there.”

Jenny Dupuis, a freelance photojournalist who was also attending the workshop in 2015, wrote in a personal essay on Medium that she, along with other women at the workshop, started to notice “weird” behavior from Witty.

“I started to feel a strong sense of discomfort,” Dupuis wrote. “The situation reminded me of going to a bar with girlfriends in college, being on the dance floor and collectively waiting to push away some overeager, unwelcomed and immature men off our backs.”

Dupuis also wrote that on the last night of the workshop, Witty attempted to follow her to her hotel room twice. Dupuis’ personal essay was in response to the article published on Vox about Witty’s quiet departure from National Geographic.

Gilliland said it made sense to him when the Vox article was published about Witty’s alleged sexual misconduct.

Since publication, the Vox article has been updated to include a statement from Witty. In the statement, he denied the allegations and apologized for his behavior. It has also been updated to include a statement that the article’s publication was not met with surprise from many in the industry. According to Vox, the well-known and established journalist’s alleged behavior had long been discussed in the field, and 10 women reached out to Vox after its publication to report other allegations against Witty.

“There’s a lot of strange power play and ego dynamics in photojournalism. At the root of a lot of sexual assault, it’s a power thing.”

Former WKU photojournalism student Emily Kask said these types of problems weren’t just at play in the industry; they also manifested themselves in WKU’s photojournalism program.

Kask studied at WKU from January 2015 to May 2016 but withdrew from the program and is now working as a freelance photojournalist in New Orleans. Kask said part of her reason for leaving WKU was the hypermasculine trends she saw in the major. She said she remembers hearing students in the WKU photojournalism program and peers in the professional world talk about their female peers’ physical attributes and their desires to sleep with them.

“These are your colleagues,” Kask said. “They’re not here for you to take to the meat market.”

She said she thinks male photojournalists avoid talking about issues like Frakes’ Title IX investigation and Witty’s alleged sexual misconduct because their careers could suffer if the high-profile photographers make their way back into the positions of influence in the field.

“All the men are keeping quiet,” Kask said. “They know these things only have temporary repercussions.”

During her three semesters at WKU, Kask said she knew of three women in the photojournalism program who experienced instances of sexual misconduct or assault.

“There’s a lot of strange power play and ego dynamics in photojournalism,” Kask said. “At the root of a lot of sexual assault, it’s a power thing.”

Photojournalism senior Lora Sparks said that out of the three professors she has in the School of Journalism and Broadcasting this semester, the only one who discussed the Witty incident in class was Amanda Crawford. An assistant professor of journalism, Crawford has nearly 20 years of experience in the field.

“When men run the world, and they look at young men, they see themselves.”

Crawford said she is an advocate for women’s rights in the journalism profession and often gives advice to her female peers. She said that during her time in newsrooms, there were multiple instances in which she noticed discrimination toward women. She said young men would often be offered jobs, promotions and raises much quicker than the women in the newsroom.

“It is a truth that women often don’t demand what we’re worth,” Crawford said. “We often don’t speak up.”

She said one of the reasons men are favored in the workplace is because they remind men in power of how they once were.

“When men run the world, and they look at young men, they see themselves,” Crawford said.

And while the reality of sexual harassment persists, Crawford said progress is being made in newsrooms around the country.

“There are women running newsrooms now,” she said. “Because of how women have progressed, we’re feeling empowered.”

Crawford expressed her hope for the profession as more women and people of color begin to enter the field.

“What we’re seeing in society is a reckoning,” Crawford said.

Gilliland attributed the male dominance in WKU’s program to the fact that most of the photojournalism professors are men.

Jonathan Adams, a visiting professional in residence, was the only professor in the photojournalism program to respond to an email asking for comment about the existence of hypermasculinity and sexual misconduct in the photojournalism industry. In an email, he said he didn’t know the reason an imbalance of female representation persists in the industry.

“I don’t know why there is still a large difference in the field,” Adams said. “If you find out, I’d love to know.”

Ballard said she doesn’t believe her education suffered from a culture of male dominance, but she also said she wished these issues had been discussed in her classes.

“I love the professors here, but no one really talks about how prominent this problem is,” Ballard said.

A push for change

Still, some in the photojournalism world are working to change their industry for the better.

On Jan. 31, photojournalists Justin Cook and Daniel Sircar created a petition that gained attention from many in the photojournalism community as it began to be shared on Facebook.

The petition, titled “Men in Photojournalism for Change,” urged men who want to improve the industry’s treatment of women to sign the letter before it was sent to workshops, conferences and leading organizations in the industry. It also had an option for men who signed the petition to opt out of revealing their name.

“We demand the culture of silence and corporate policies that enable predatory behavior be changed,” the petition said. As of May 6, Justin Cook said the petition had been signed 446 times.

Women in photojournalism have also started initiatives to highlight the work of women and create places to connect with one another.

They created the group as a resource for women and non-binary individuals in the industry to discuss issues and share advice with one another. The group currently has over 8,000 members who use the group as a networking tool and a way to share posts about job opportunities and day-to-day experiences in the field.

In 2017, documentary photographer Daniella Zalcman started an online database to help highlight the work of women photojournalists. The database, called  Women Photograph, uses its resources to provide women photographers with opportunities to develop their skills. It also uses its platform to educate people on why initiatives like Women Photograph are necessary.

Every week, Women Photograph posts a weekly breakdown of bylines from publications and makes note of how many of these photos were taken by women. On April 30, they tweeted that 17 out of 166 photos, or 10.2 percent of images that week, were taken by women — the second worst week of 2018.

Klann said she hopes women and people of color will continue to make progress in the industry.

“I want to see the world through our lens, instead of the white, heteronormative male lens we have been gazing through for centuries,” Klann said.

Kessler, the student who filed the Title IX complaint against Frakes, wrote in an email that when there is an imbalance of power, whether that be between photographers and editors or students and teachers, she thinks that there should be boundaries and easier ways to come forward about bad behavior without fear.

“No one should be threatened or cornered because they feel inferior,” she wrote.