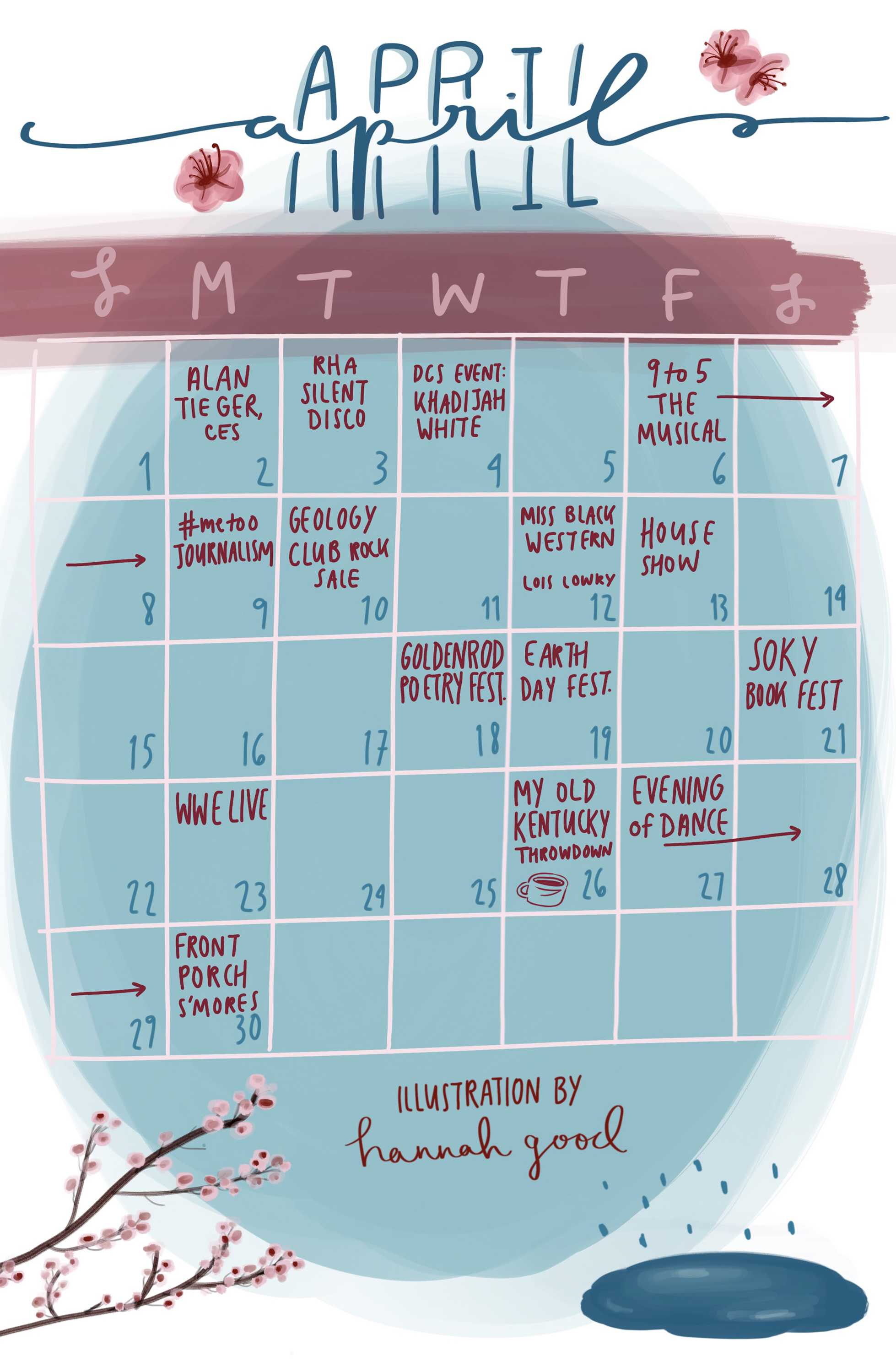 Turns out, April showers bring lots of cool events to the Hill (and treacherous streams of water surging down Avenue of Champions, but that’s another story).

This month, there’s something for everyone whether you’re a lover of literature, sustainability, Dolly Parton or even professional wrestling.

Our campus is also hosting some incredible guest speakers this month from the journalists who broke the Larry Nassar sex abuse case to an attorney who prosecuted Bosnian War criminals.

Happy April, and watch out for those puddles.

Join the Cultural Enhancement Series for its final event of the year as it hosts Alan Tieger, an attorney who led trials against war criminals after the Bosnian War. The event is a collaboration between the series and the International Year of Bosnia and Herzegovina. It starts at 7:30 p.m. in the Gary Ransdell Hall auditorium and is free as always.

The Residence Hall Association will host a silent disco from 5-9 p.m. in DSU Nite Class. If you’re unfamiliar with the concept, a silent disco is a dance in which the attendees listen to music through wireless headphones rather than a speaker system.

April 3 is also the first Talisman portrait day of the semester! Come to DSU from 10 a.m. to 3 p.m. and get your portrait taken. Photos are free, and you can snag them off Facebook to share with your friends. Make sure you send one to your mom, too. She misses you.

The Department of Diversity and Community Studies will host Khadijah White, an assistant professor of journalism and media studies at Rutgers University. The title of White’s talk is “Boiling Over Right-Wing Populism: Race, Post-Race, and Post-Isms in Tea Party News.” It will begin at 4 p.m. in DSU 3020.

The Department of Theatre and Dance will present “9 to 5 the Musical” Friday and Saturday at 8 p.m. and Sunday at 3 p.m in Van Meter Hall. The show’s music and lyrics were written by THE Dolly Parton, so obviously this show is a must-see.

On April 9, the School of Journalism and Broadcasting Gaines Lecture Series will present #MeToo Journalism, featuring a panel of the Indianapolis Star investigative reporters who broke the Larry Nassar sex abuse case. The event, which is part of the John B. Gaines Family Lecture Series, starts at 7 p.m. in the Jody Richards Hall auditorium.

The Geology Club will host a rock and mineral sale from 10 a.m.-2 p.m. in the Environmental Sciences and Technology Building lobby.Maybe you can adopt your own pet rock like former Talisman staffer Evan Pennington did back in 2015. The googly eyes and video montage are both optional, but highly recommended.

Check out the Miss Black Western Scholarship Pageant, a WKU tradition nearly 50 years in the making. The Alpha Kappa Alpha sorority started the pageant because black students weren’t allowed to participate in homecoming events. The 47th annual pageant will take place from 4 p.m.-10 p.m. in the DSU auditorium.

Also on April 12 is an appearance by Lois Lowry, the Newbery Medal-winning author of “The Giver” and more than 40 other books. Lowry will speak at the Knicely Conference Center on South Campus at 6 p.m.

Matthew Danger Lippman, a self-described “solo glam-punk hip-hop crooner with the revolving cast of backing musicians,” will be traveling all the way from New York to grace a house show at 516 Regents Ave.  Check out Lippman with Gabriel King Neville of Evansville and Bowling Green’s own Lilac Cell. The show starts at 7 p.m.

Come to Cherry Hall 125 at 7 p.m. to hear award-winning student poetry at the annual Goldenrod Poetry Festival. There will also be a reading by a guest poet, who has not yet been announced.

We’ll also be back at it again with another portrait session! Join us in DSU from 10 a.m. to 3 p.m. for another chance to get a free headshot.

The Office of Sustainability will be hosting its annual Earth Day Festival in Centennial Mall from 10 a.m.-2 p.m. This can’t-miss event will feature food, music, plants and all sorts of other Earth-loving fun.

The SOKY Book Fest 2018 is an annual literary event hosted by Barnes and Noble, the WKU Libraries and the Warren County Public Library. The main event will take place on Friday and Saturday from 9 a.m.-2 p.m. in the Knicely Conference Center and feature panels and other events to interact with best-selling and up-and-coming authors.

Local record store Mellow Matt’s Music and More will open bright and early at 7 a.m. to celebrate the 2018 National Record Store Day. The store will feature limited release Record Store Day exclusives. The festivities will also include giveaways, breakfast tacos from Home Cafe and Marketplace and music from bands like the Cartoons, Full FrontalSaurus and Dos Cobras. Record Store Day only comes once a year, so be sure to do it big.

The ultimate Kentucky/Tennessee latte art throwdown, My Old Kentucky Throwdown, will return to Spencer’s Coffee on Thursday, April 26 from 5:30-midnight. The competition, which will feature baristas from around the country, will raise money for The HIVE of Bowling Green, a nonprofit that provides resources for adults with developmental disabilities.

The WKU Dance Company will present the 2018 Evening of Dance at the Russell Miller Theater in the fine arts center. All tickets are $15 and shows are at 8 p.m on Friday and Saturday and 3 p.m. on Sunday.

Join ORAC for Front Porch S’mores from 4-6 p.m. in front of the Preston Center. All ingredients and supplies for s’more-making will be provided, so don’t miss out!

If you would like to submit an event for our consideration, send us an email at wkutalisman@gmail.com. Events are reviewed and posted at the end of each month.