WKU departments have teamed up for Sexual Assault Prevention Month to teach advocacy and awareness to students in hopes that violence will no longer be tolerated.

Hope Harbor, WKU Counseling Center and WKU Office of Student Conduct partnered on April 4 to host “This is What an Advocate Looks Like,” an interactive workshop to educate students on bystander prevention – how to be reactive and proactive in the face of sexual harassment.

“The most important part about prevention is not what you do, it’s that you do something,” said Londa Stockton, community educator for Hope Harbor.

Stockton began the discussion on bystander prevention by having students imagine their loved ones in danger of sexual assault. She asked how they would feel if they knew someone was nearby, aware of the situation, but did nothing to help. “Angry,” “disappointed” and “hurt” were just a few of their responses.

“We’ve all been that person, that bystander, who just sits there unsure of what to do,” she said.

Stockton informed the students on three different ways they could act in these situations: the “3 Ds.” She said you can: 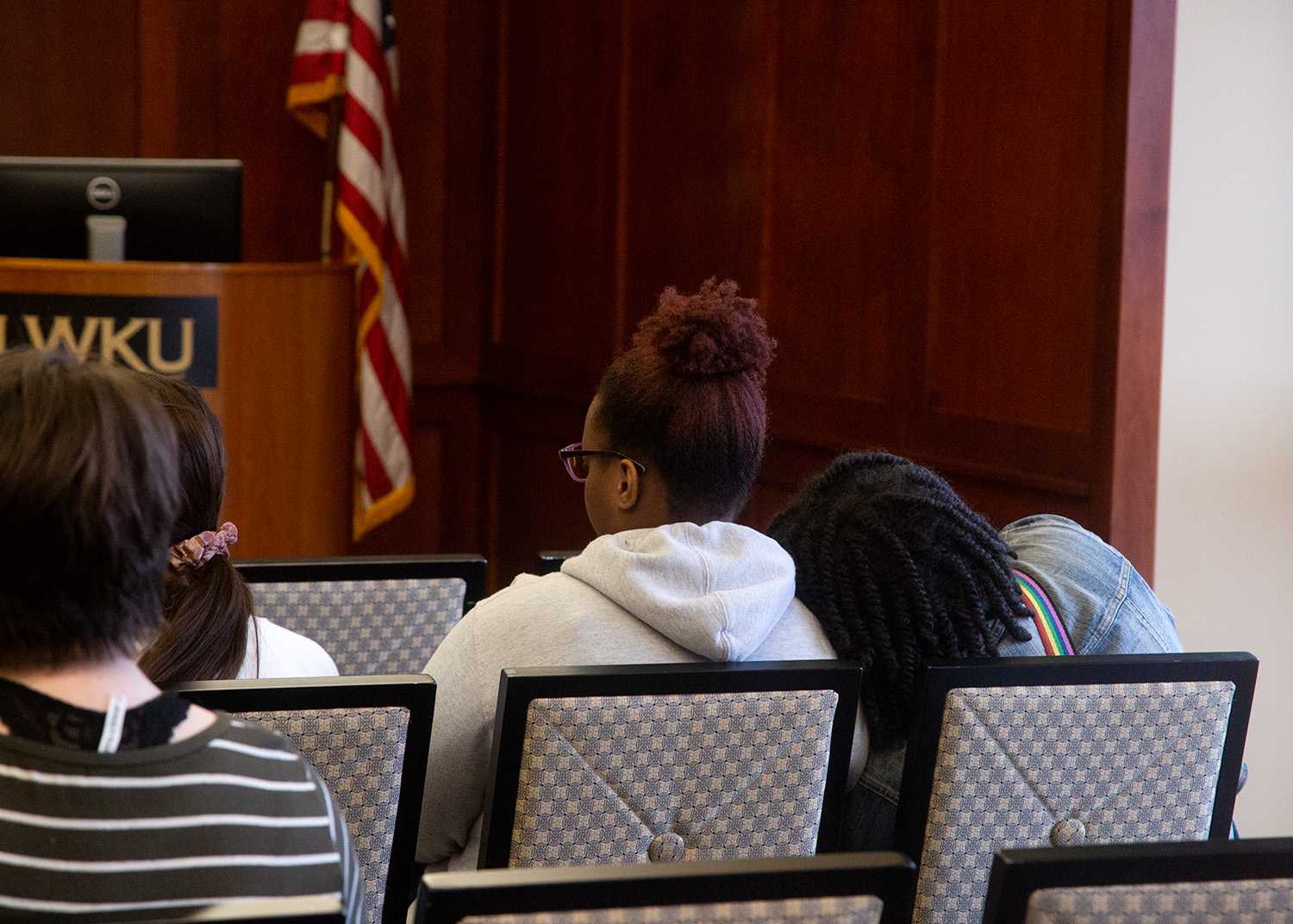 Louisville sophomore Tara Townsend rests her head on a friend’s shoulder while listening to advice by Hope Harbor community educator Londa Stockton on how to be an advocate. Stockton spoke about how schools who have implemented the Green Dot Strategy have reduced violence by over 30 percent.

Anytime someone becomes an active bystander, they are being green dots among many red dots, Stockton said. Green dots are the choices, actions, words or attitudes used to create a culture that does not tolerate violence. She said schools that have implemented the Green Dot Strategy reduced violence by over 30 percent.

“We’re telling people that violence is not OK, that we’re a safe person to talk to and that we will support them,” she said. “One little act can be the saving grace.”

Aurelia Spaulding, communications and marketing coordinator for WKU Public Affairs, said she came up with the idea for this workshop when she saw a shirt that said, “This is what an advocate looks like,” and felt that the main thing missing on WKU’s campus was an activity surrounding bystander prevention.

“Being an advocate looks different to me than it does to someone else,” she said. “We all have our own way of participating.”

Spaulding said WKU recognizes April as Sexual Assault Prevention Month, rather than an awareness month, because of the importance of stopping the situation before it happens.

“We just want to show students ways of preventing sexual assault from happening,” she said.

Elizabeth Madariaga, WKU staff counselor and sexual assault services coordinator, said many people think of the word “advocacy” as something formal and intimidating.

“Standing up for a social justice issue doesn’t have to be intimidating,” she said. “It can just be listening and being there for someone.”

Tara Townsend, a sophomore from Louisville, said she thinks it’s really important to let people know that there is always someone you can talk to.

“I want to stand up for people so they don’t have to go through what I went through,” she said. “What I’m still going through.” 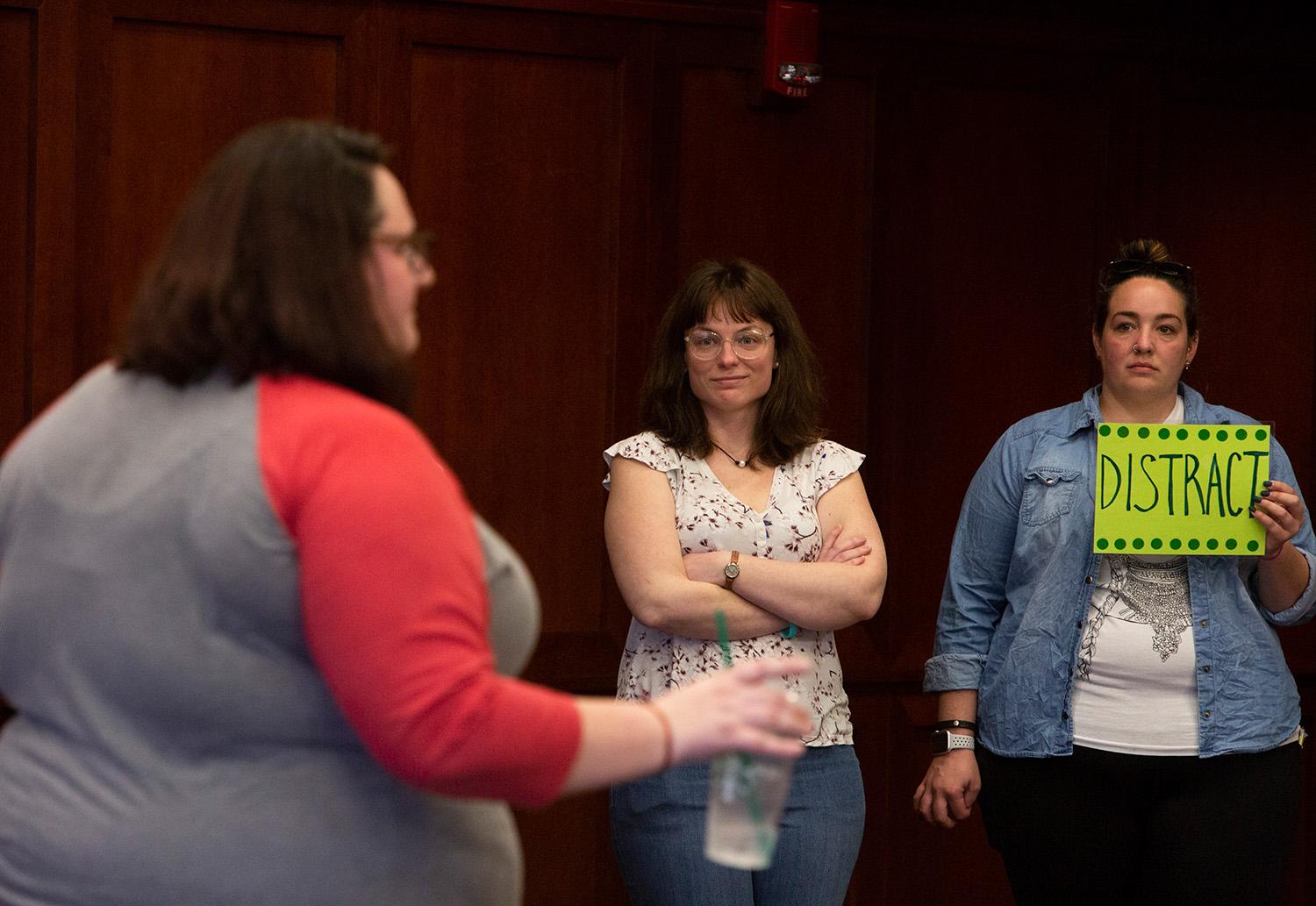 Stockton gives a presentation to WKU students about three ways to help prevent sexual assault. These strategies were to distract, delegate and direct.

These representatives from Hope Harbor, WKU Counseling Center and WKU Office of Student Conduct took time during the workshop to explain all the places students can go to get help.

There will be more events hosted by Hope Harbor and the WKU Counseling Center throughout the month of April for students to participate in prevention methods and spreading awareness of sexual assault. The next one, “First Things First: Your Story, Your Words,” will be on April 16 at 7 p.m. in the Downing Student Union Auditorium. There will be a $7 entry fee that supports Hope Harbor.

Before students left the workshop, Stockton challenged each of them to perform two green dot actions within the next 24 hours: wear an “I believe survivors” button, interject a heated argument, pull a woman out of an uncomfortable situation at a party. She said the goal is always to outnumber red dots with green dots.

The WKU Counseling Center is located on the fourth floor of Potter Hall, where there are five counselors, as well as someone on-call Monday through Friday, 8 a.m. to 4:30 p.m. This service, as well as Hope Harbor, is completely confidential.