Take Back the Night in the era of #metoo

Over 200 Bowling Green residents of all ages marched from the First Christian Church to the end of Foutain Square in the annual “Take Back the Night” march on Thursday, April 26. Many wore matching gray T-shirts with a Take Back the Night graphic on the front and name tags that said phrases like “not slut” in retaliation to the derogatory names women have been called by harassers.

Take Back the Night is an international nonprofit organization with roots dating back to protests in the 1960s and 1970s related to women’s safety when walking streets at night and sexual violence against women, according to the nonprofit’s website.

Now, the organization works to raise awareness about sexual violence in all its forms and stand in solidarity with survivors. 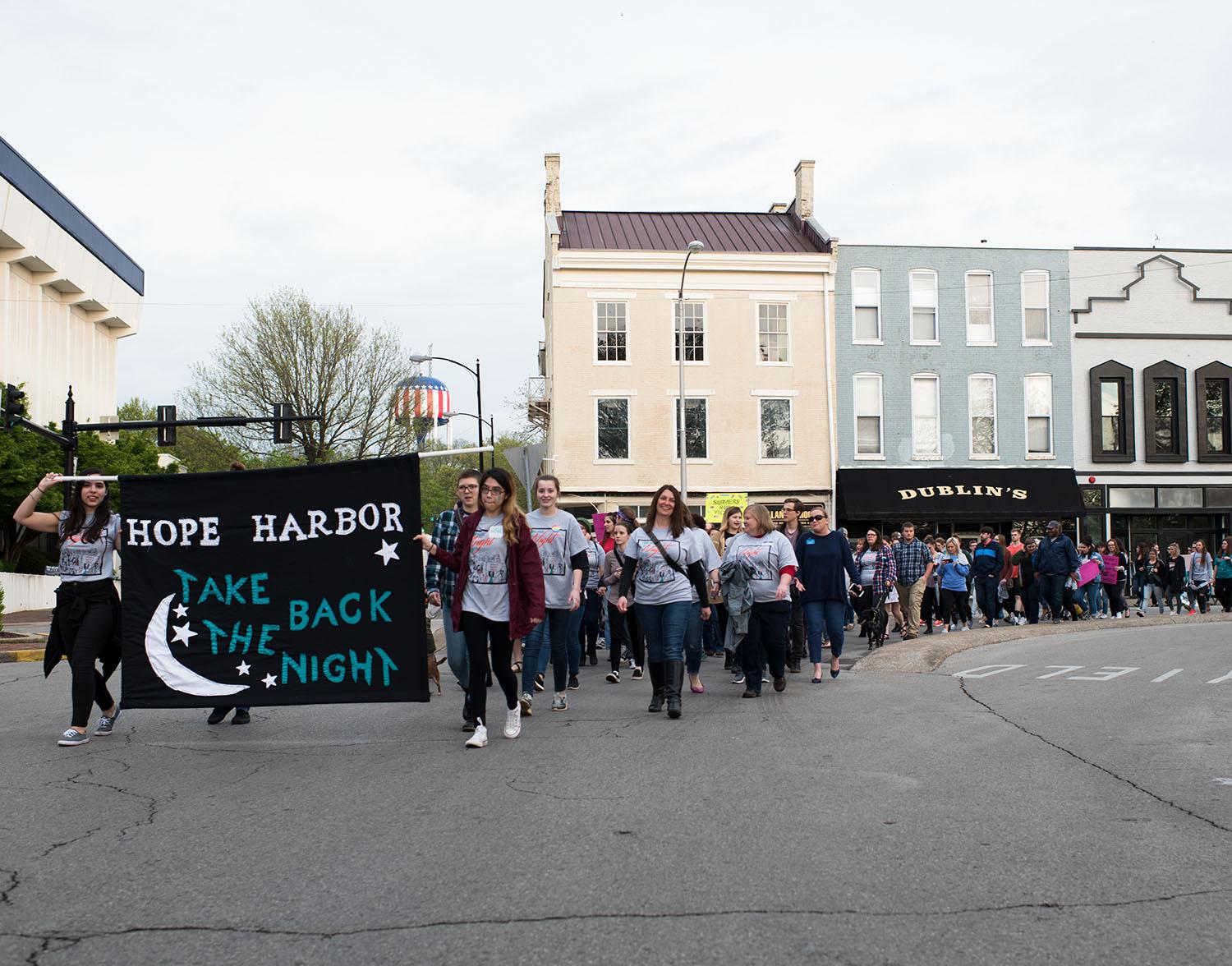 Residents march through Bowling Green to raise awareness for Sexual Assault Awareness Month at Hope Harbor’s annual Take Back the Night event. Hundreds of community members from Warren County and Bowling Green came together and walked nearly a mile around downtown.

In Bowling Green, the march has been organized by Hope Harbor for the past 11 years. Hope Harbor is a local nonprofit rape crisis center that provides resources and counseling to survivors of sexual violence.

Bowling Green resident Alayna Milby, who graduated from WKU in 2014, serves as the crisis intervention specialist and volunteer coordinator for Hope Harbor and was one of the main organizers of the march. Milby said the controversial events of the 2016 presidential election, which involved the Access Hollywood tape scandal as well as sexual misconduct allegations against then-candidate Donald Trump, and the rapid spread of #MeToo movement have inspired more people to volunteer and partner with Hope Harbor. 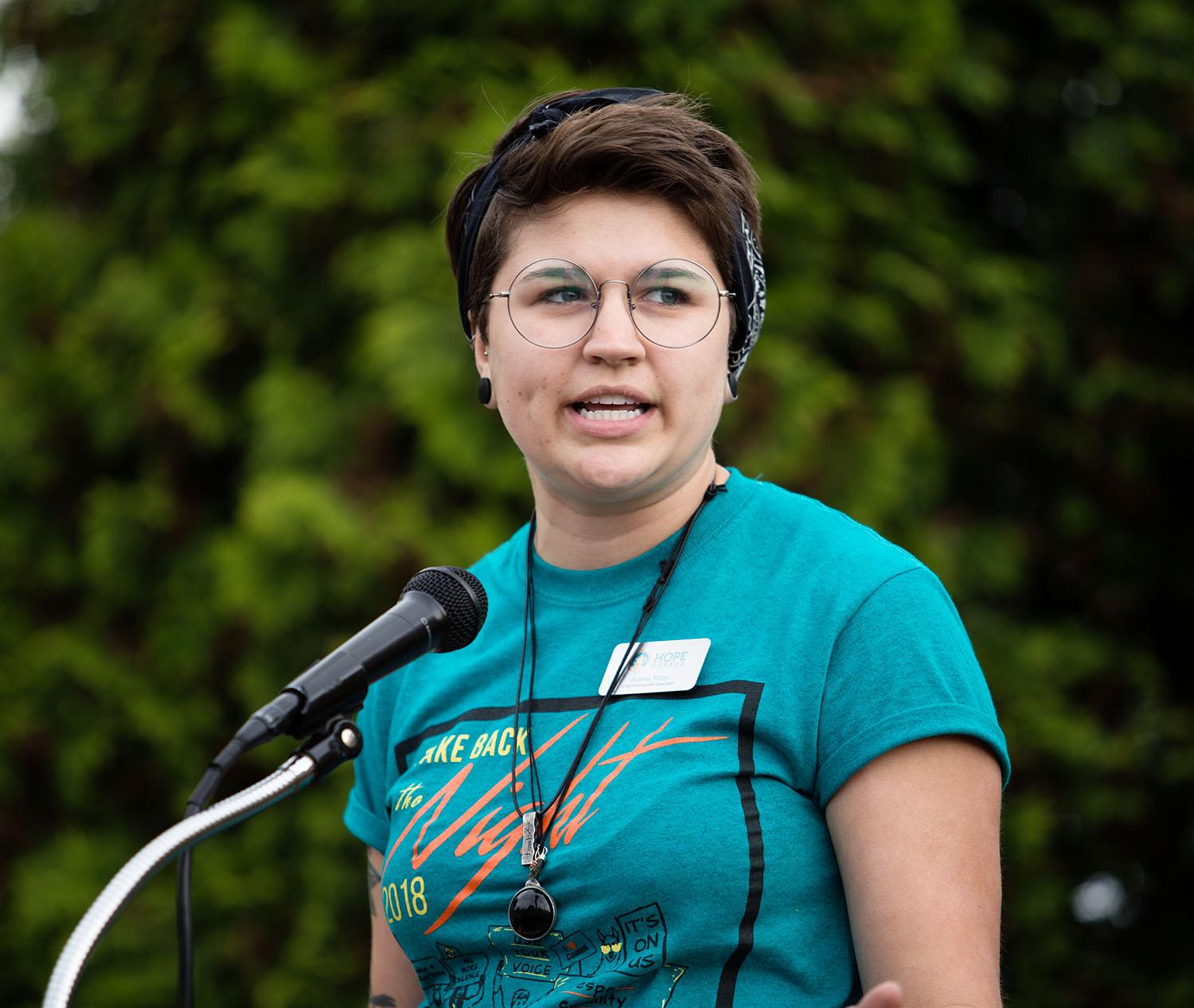 Bowling Green resident Alayna Milby speaks at the annual Take Back the Night event. Milby helped orchestrate the march and Take Back the Late Night.

Milby said events like Take Back the Night are important because it allows the community to come together to support survivors of sexual violence.

“Survivors get to see that the community stands with them,” Milby said.

For survivors like Bowling Green resident Leah Foster, it is incredibly important for people to come out and support the cause, she said.

“It lets you know that you’re not alone in these situations,” Foster said. “That you have all the support in the world.”

She also brought her dog Homie to the march, dressing him in a Take Back the Night T-shirt

The event began with speakers from Hope Harbor and survivors who shared their stories of abuse and what marches like these meant to them. Bowling Green resident Trycia Barnes and 25 of her friends and family stood in solidarity by all wearing tie-dye shirts. They said they wanted to stand out and make a statement against sexual assault, she said.

“It moves you that so many people are out here in solidarity,” Barnes said. 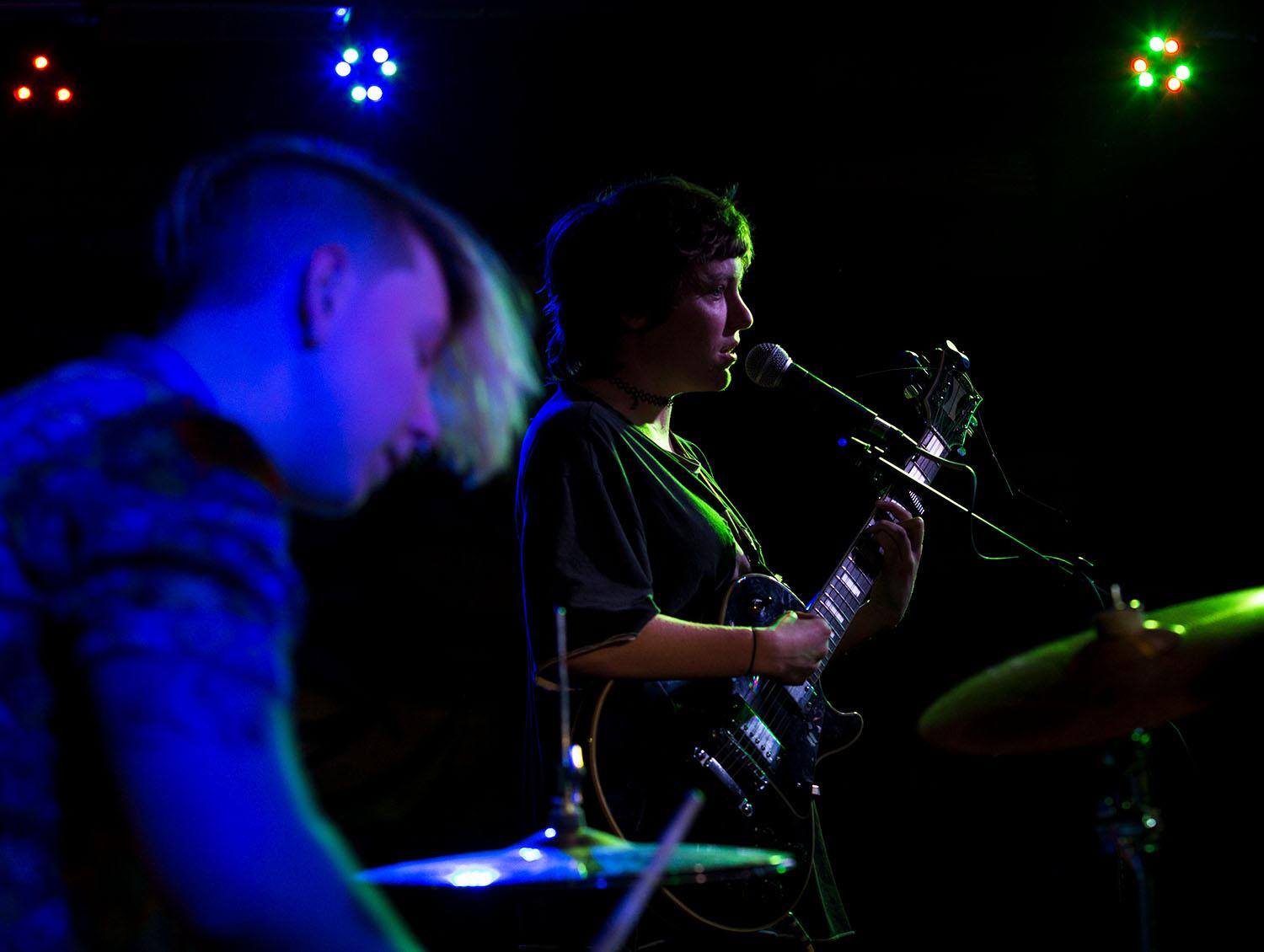 Karen Ledford and Rej Forester perform in their band GRLwood during Take Back the Late Night at the A-Frame. GRLwood was the second of three artists to perform during the annual event.

The march was followed by the third annual benefit concert at the A-Frame called “Take Back the Late Night.” Four different acts took the stage at the event, including Louisville band GRLwood and Bowling Green alt-country artist Jamie Resch.

The show was put on by the local, nonprofit community arts venue FFOYA House, and all proceeds went to Hope Harbor. 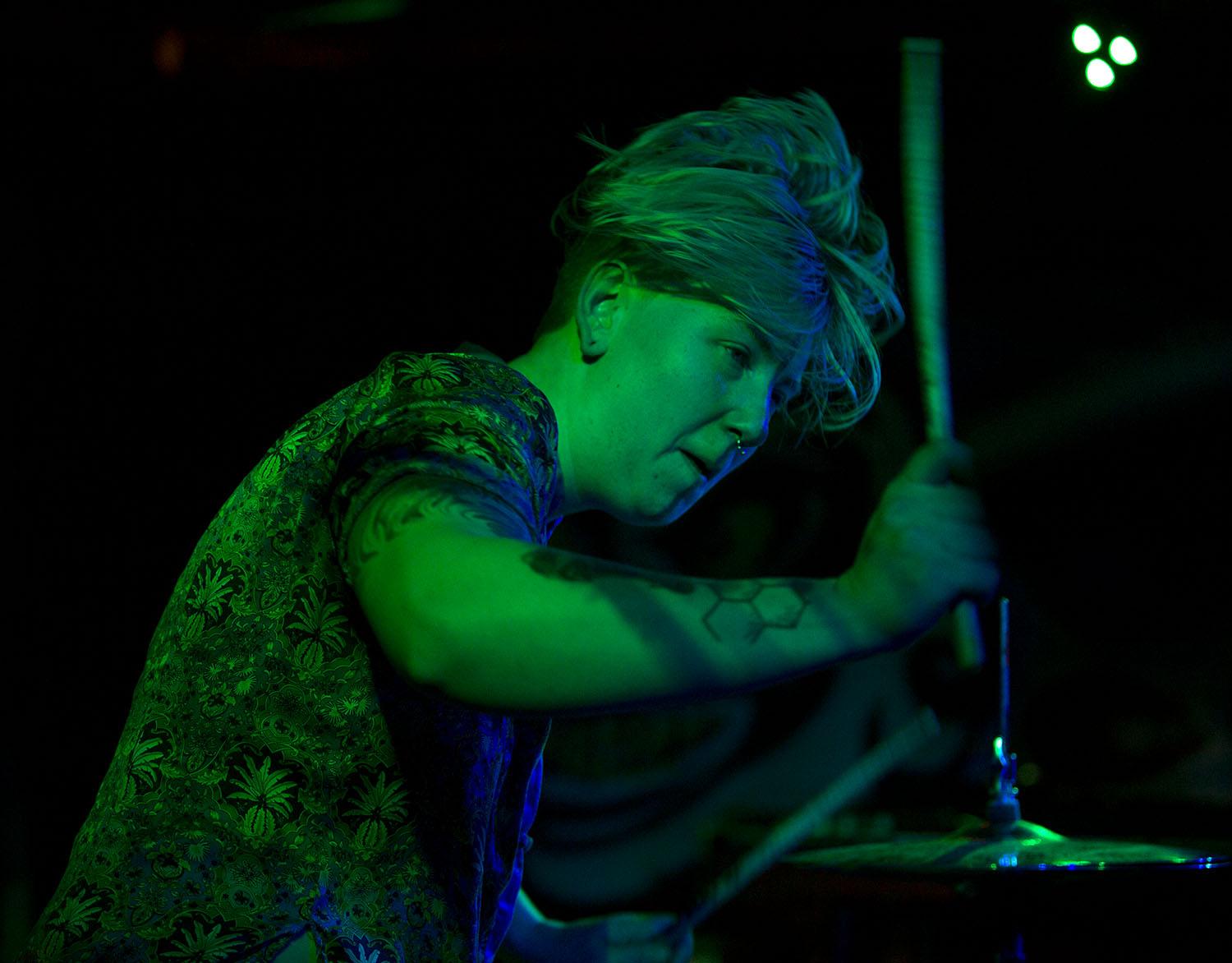 Karen Ledford, drummer of GRLwood, performs during Hope Harbor’s Take Back the Late Night. GRLwood formed in Louisville in August 2017.

Louisville resident Karen Ledford, the drummer for GRLwood, said that it’s important to have events to raise awareness about sexual violence to shed light on the problem. Ledford said sexual violence is a problem that affects everyone, so it’s everyone’s responsibility to address it.

“Whether you’re a man or a woman, our country has a problem with this and needs to address it,” Ledford said.

Former Friends of Young Americans, a Bowling Green alternative band which runs the FFOYA House and organized the show, reached out to GRLwood to participate in the show. Amanda Crawford, a WKU assistant professor and a flutist, organist and singer for FFOYA, worked to address sexual violence through a grant given to FFOYA House by the Kentucky Foundation for Women. Crawford said FFOYA used the money to host the show, as well as art and writing workshops for survivors of domestic violence. 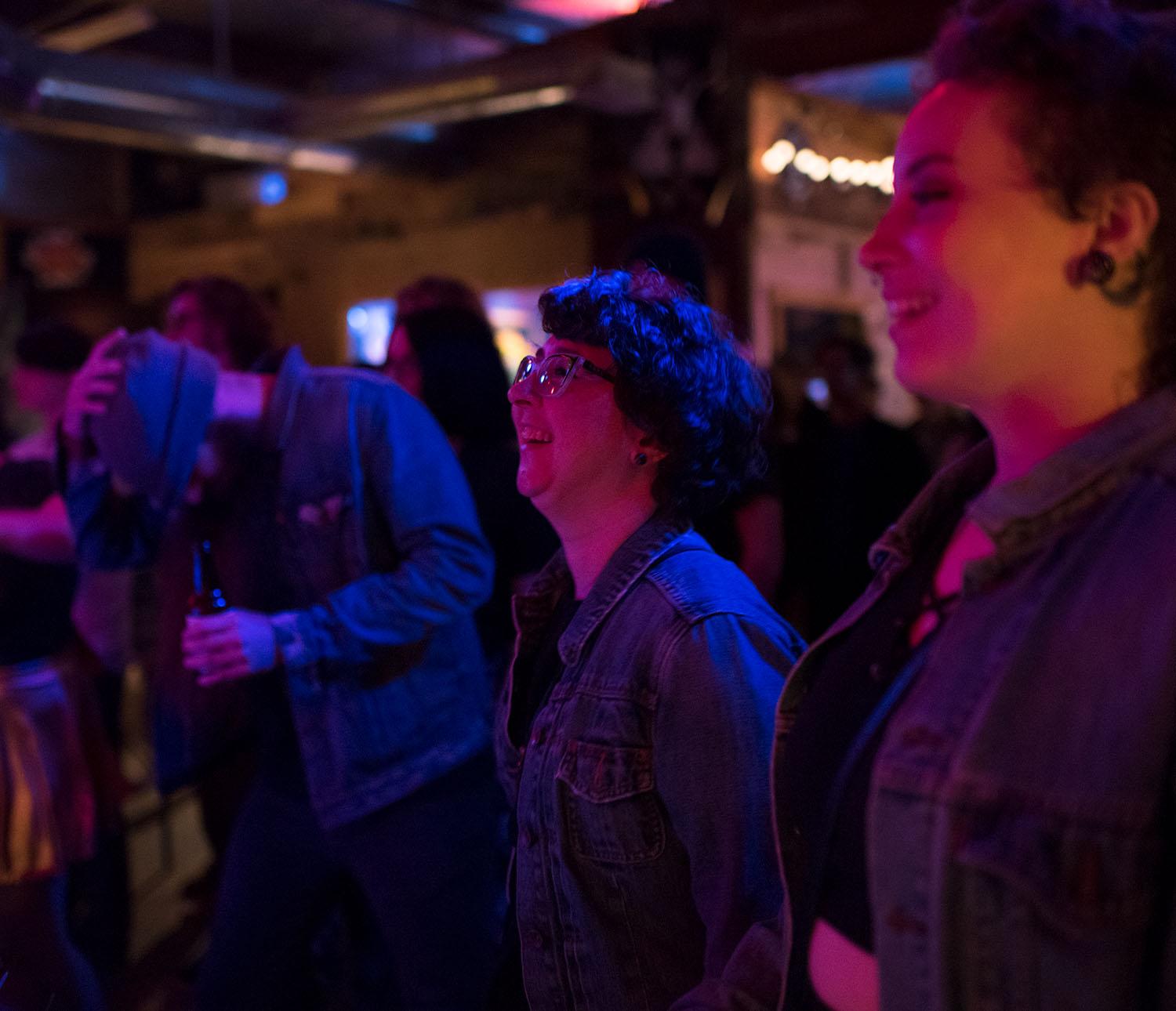 “Our goal was to bring the art and music community to the activist community and work together on this issue,” Crawford said.