The Bowling Green streets surrounding Fountain Square Park were buzzing with a bit more commotion than on a typical Thursday night. As the sun melted into a rose pink horizon, the lights of the Capitol Arts Center beamed brightly over hustling heads. Like moths to a porch lamp, people headed toward the doors of the Capitol for the premiere of Lost River Sessions Live.

Lost River Sessions first began recording in the summer of 2014 with the Dead Broke Barons as its first act. Each month, the TV and radio show features two bands who perform in a venue specifically chosen to fit the mood of their music.

Past venues have included WKU locations such as Van Meter Hall and the Faculty House. Other local sites include the Highland Stables, Corsair Distillery and the Phoenix Theatre.

But this was a milestone in the show’s production. It was the first show to be performed as a full-fledged concert in front of a live audience.

The live show, as well as the TV and radio broadcast, is produced and organized by the WKU Public Broadcasting Station. The show has won various awards, including two Ohio Valley Regional Emmys for exceptional audio and lighting. 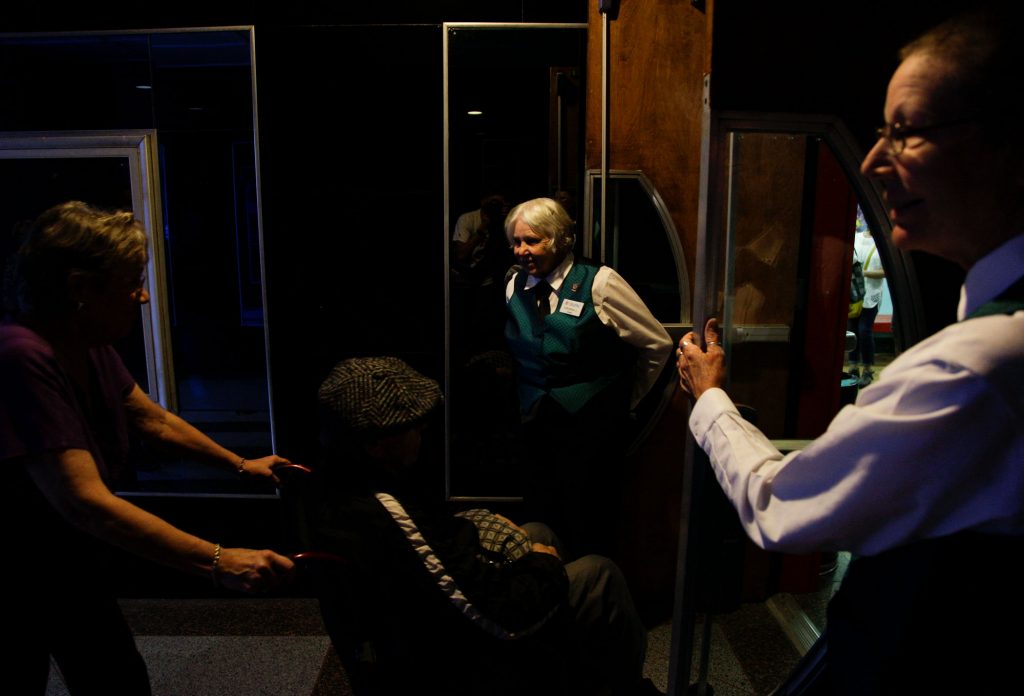 Co-producers Darius Barati and James Pearson are the masterminds behind the award-winning Lost River Sessions, which is airing across the country on National Public Radio. The national exposure helps perpetuate Barati and Pearson’s vision of spreading folk, Americana and bluegrass music around the country.

But Barati wanted to bring the sounds and experiences of Lost River Sessions to a large, live audience. The first live show allowed him to do just that.

In the hours leading up to the live recording, Barati, a WKU alum, was busy, darting from backstage to the back of the auditorium to the front and around again. He was making sure the bands, employees and audience members were all having the best time possible.

“The crowd seemed to really enjoy it,” Barati said. “We had a great reception, and I was really excited that everyone came out to support [the event].” 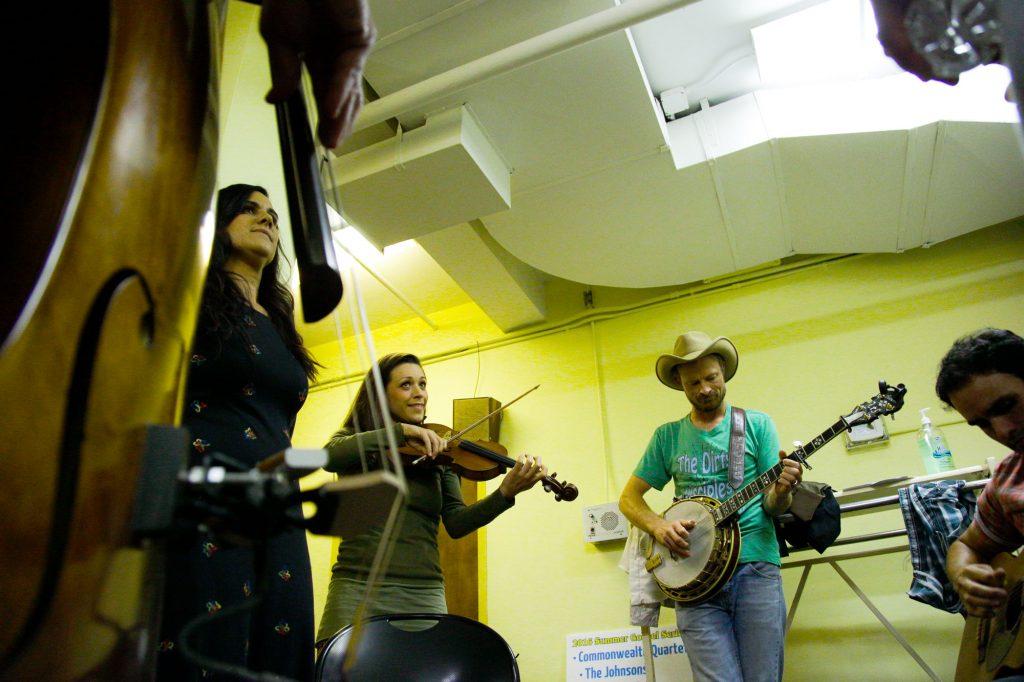 The Carmonas, a band native to Bowling Green, practices backstage before the start of Lost River Sessions Live at the Capitol Arts Center on September 15. They were one of three bands who performed at the inaugural event.

Derek Harris, the bass player for The Misty Mountain String Band, fixes his tie backstage before the start of the show. His band played a mix of folk, bluegrass and Americana music for a large crowd.

Many others were working behind-the-scenes to make the first Lost River Sessions Live show successful, including many WKU students.

Select students work for WKU PBS and get to help film, edit and manage the Lost River recordings. Barati serves as a mentor to many of them as he helps them find their niche in broadcasting, whether it’s behind the camera or running the social media and marketing.

“I feed off the enthusiasm of it being something new for the student rather than working with someone who’s done it for like 30 years and its just become old hat,” Barati said.

Cincinnati senior Nick Spearman has worked at WKU PBS since his freshman year, and he started editing for Lost River Sessions during the spring semester of his sophomore year. From influencing his music taste to helping him prepare for a job in the real world, he said Lost River Sessions had a definitive impact on his college experience.

“I’ve actually gotten more into bluegrass because of it, as well as the different types of genres we feature on Lost River Sessions,” Spearman said. “I even have a Pandora station specifically dedicated to that [type of music].”

On the evening of the event, Armstrong stood just beyond the Capitol ticket window, selling merchandise and greeting audience members as they walked into the auditorium.

Armstrong, a marketing major, works closely with the production team to market the Lost River Sessions brand to the Bowling Green community.

“It’s just been a good real-world experience,” Armstrong said, adjusting the new t-shirt she helped design. “I feel like I’m gaining a grasp of what non-profit organizations do to stay in business and keep their brand alive.”

She added that one of her main focuses is pulling the community together and making the events “a win-win situation for everyone.”

On Thursday night, she did so by selling t-shirts and being one of the many hospitable hosts at the event. 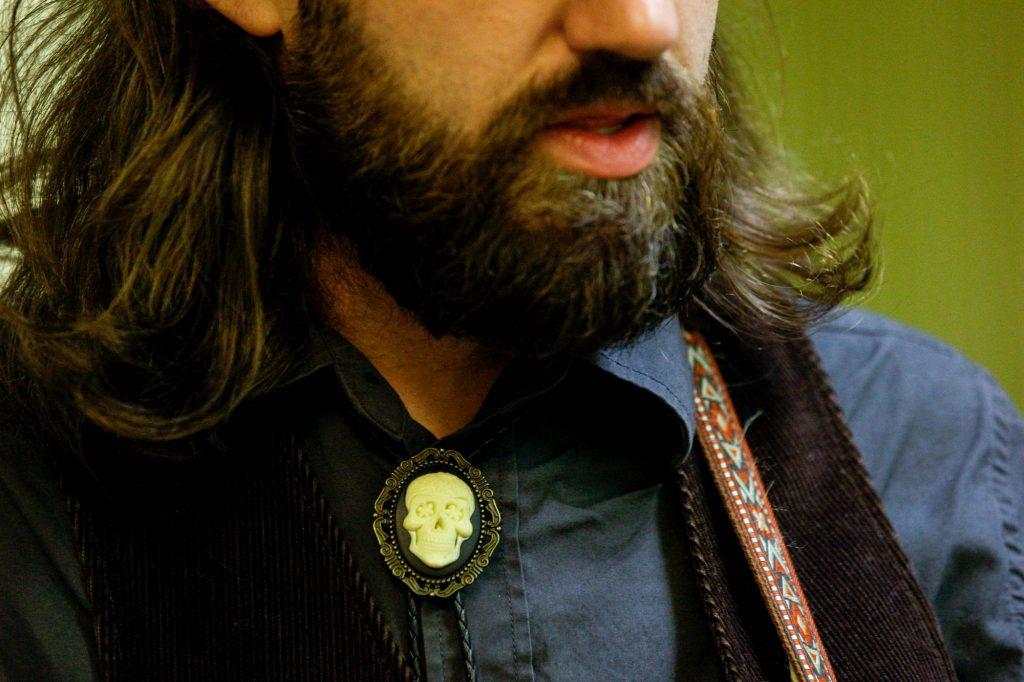 Paul Martin, the mandolin player for The Misty Mountain String Band, practices with the band backstage before going on stage at the Capitol for the first live Lost River Sessions. Martin also played banjo in the four-member string band.

As the crowd filled Capitol’s red velvet seats, the bands participating in the event were busy warming up backstage. All of the night’s performers were Lost River alumni who had performed in previously filmed episodes but were now returning to the live stage for another chance to share their passions with a receptive audience.

The Dead Broke Barons were a band of firsts: first to perform on Lost River Sessions, first to record an album on the show and first to perform at Lost River Live. The three-man band consisted of Hunter Colson, Shane Johnson and Seth Pedigo. The latter two switched between playing mandolin, banjo and guitar as Colson plucked the upright bass. They credited their ability to switch instruments by themselves to a lack of roadies.

“We’re dead broke,” Pedigo said. He was obviously the joker of the group, keeping the audience equally entertained with his smooth singing voice and his humor.

Later backstage, Pedigo recounted his WKU glory days when he would play his original songs for the student radio station, Revolution 91.7.

“Back then I was just doing what’s called hobo dreams,” he said. “I would do the bass drum, tambourine, banjo and harmonica,” Pedigo said, looking at his banjo which still had sharpie-drawn remnants from his college years strewn across it.

Meanwhile, the Misty Mountain String Band sat back in their chairs, waiting for their turn to perform. Occasionally, one member would leave to survey the array of Subway sandwiches and chip bags available on the break room table.

They would later prepare with a few short strums on their instruments then woo the crowd with their catchy new album title track “Red Horizon.” Written by Paul Martin, it’s about longing for the time when there is no more responsibility and he can just chill out. They seemed to discover that chill zone with the following song, “Boss Higgins,” a definite showcase of their musicianship, written by fiddle player Neal Green.

“Best thing about having a string band is you can play any kind of song you want,” said Derek Harris, bass player and the most formally dressed of the group. 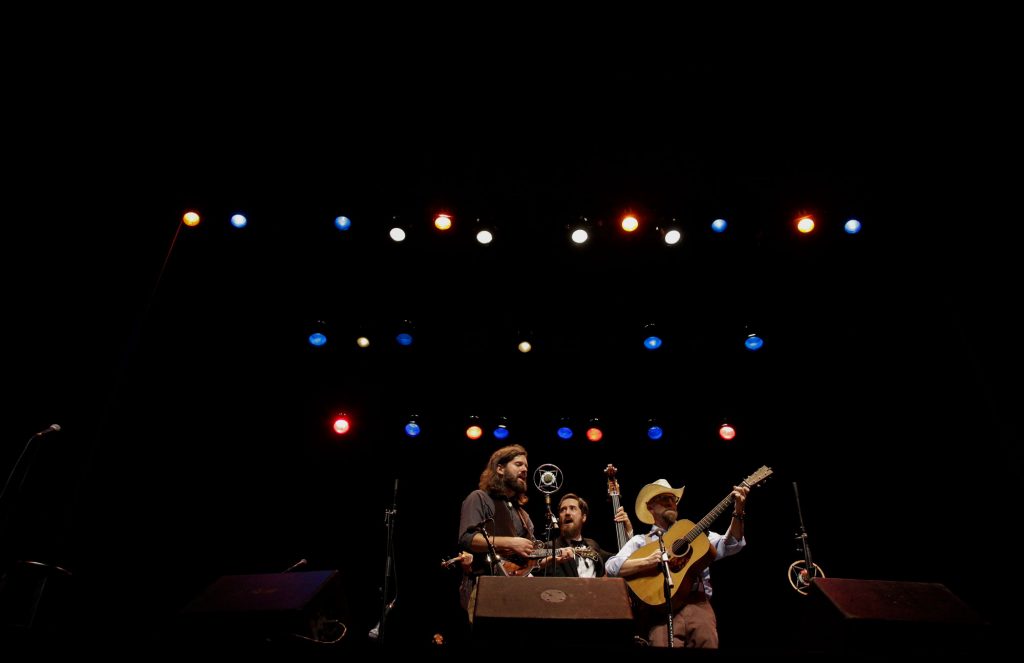 The Misty Mountain String Band takes the stage at the first live Lost River Sessions show.  at the Capitol Arts Center on September 15th, 2016. While on stage, they played music from “Red Horizon,” their newest album.

Finally, it was the Carmonas’ turn to take the stage. After warming up with backstage jam sessions all night, they were ready to wow the audience with their enchanting harmonies and enthralling energy. The three-member band of siblings was joined by four guest musicians who added a whole new layer of fun and talent to the act. The final performance was an explosion of hand-clapping, heel-tapping jubilation which ended in a joint finale of “I’ll Fly Away.”

All of the bands and most of the audience joined in a swinging rendition of the gospel hymn to close out the first successful run of Lost River Sessions Live. As the final note rang out and standing ovations were given, the ephemeral spirit that live music brings hung in the air.

Audience members left with anticipation for the next event already welling up.

Larry Marsh, who sat in the crowd during the performance, said he “enjoyed the event immensely” and that he would be back to more Lost River Sessions events in the future.

The next live show will be October 27, and you can expect another fun (and perhaps even Halloween-themed) night of music and community fellowship. Tickets will be $15 and can be purchased online or at the door. The next show is promised to bring new bands and a fresh, new sound to Lost River Sessions Live. 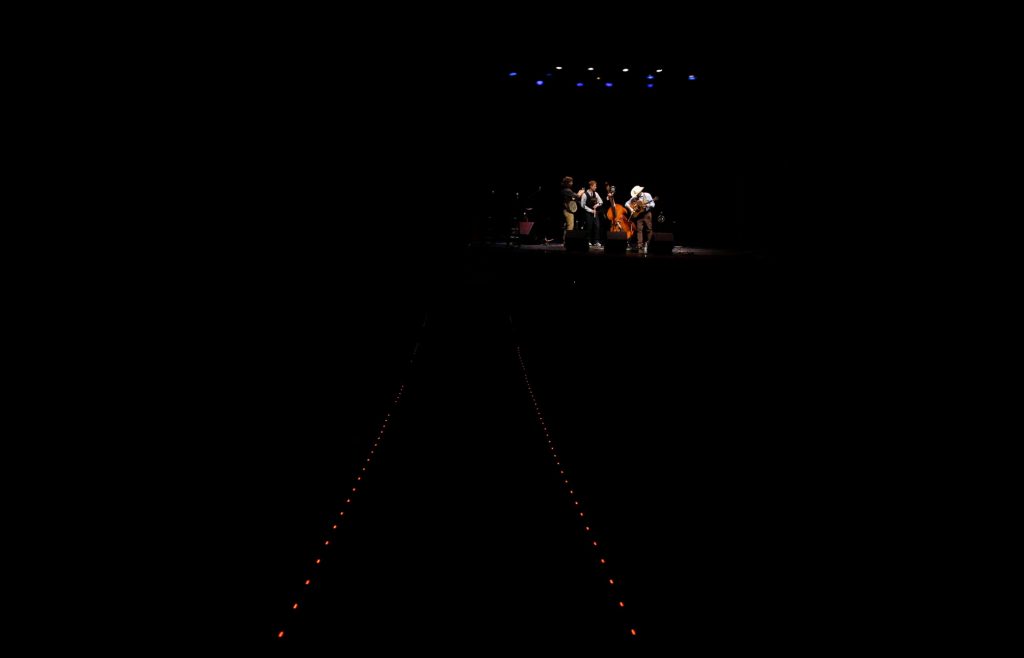 The Misty Mountain String Band performs at Lost River Sessions Live. The second band of the night, they played after Dead Broke Barons and before The Carmonas.