3 ways to get involved with broadcasting at WKU

WKU Broadcasting offers a handful of programs for students to experience the world of broadcasting. From covering campus news on air with NewsChannel12, to reliving sports highlights with Extra Point, to finding your voice as a radio station DJ, here are three ways to get involved with broadcasting at WKU. 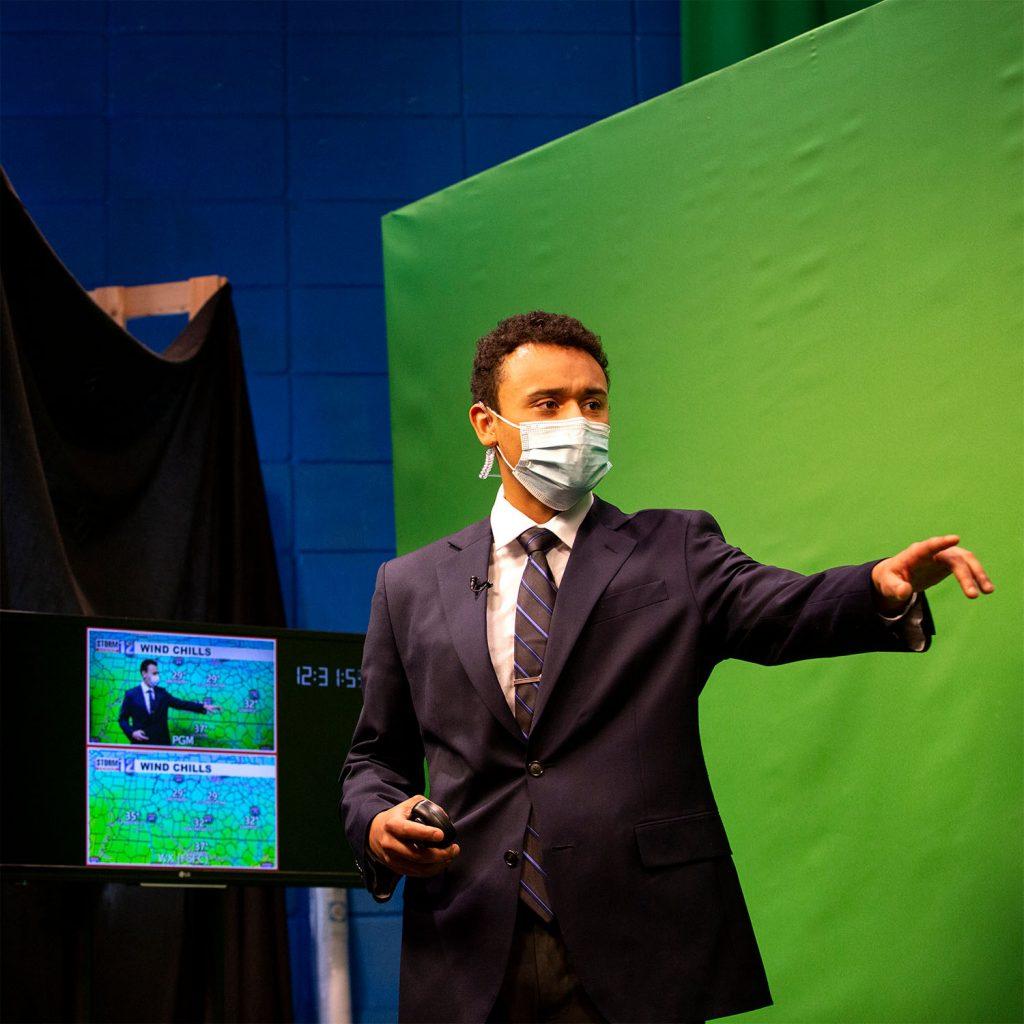 Springdale, Ohio senior Noah Moore gives his weather forecast during the NewsChannel12 broadcast on Friday, Feb 5. Being a host or weather forecaster at NC12 are just a few roles available to students who want to work in front of the camera, while more roles exist for those who wish to work behind it. 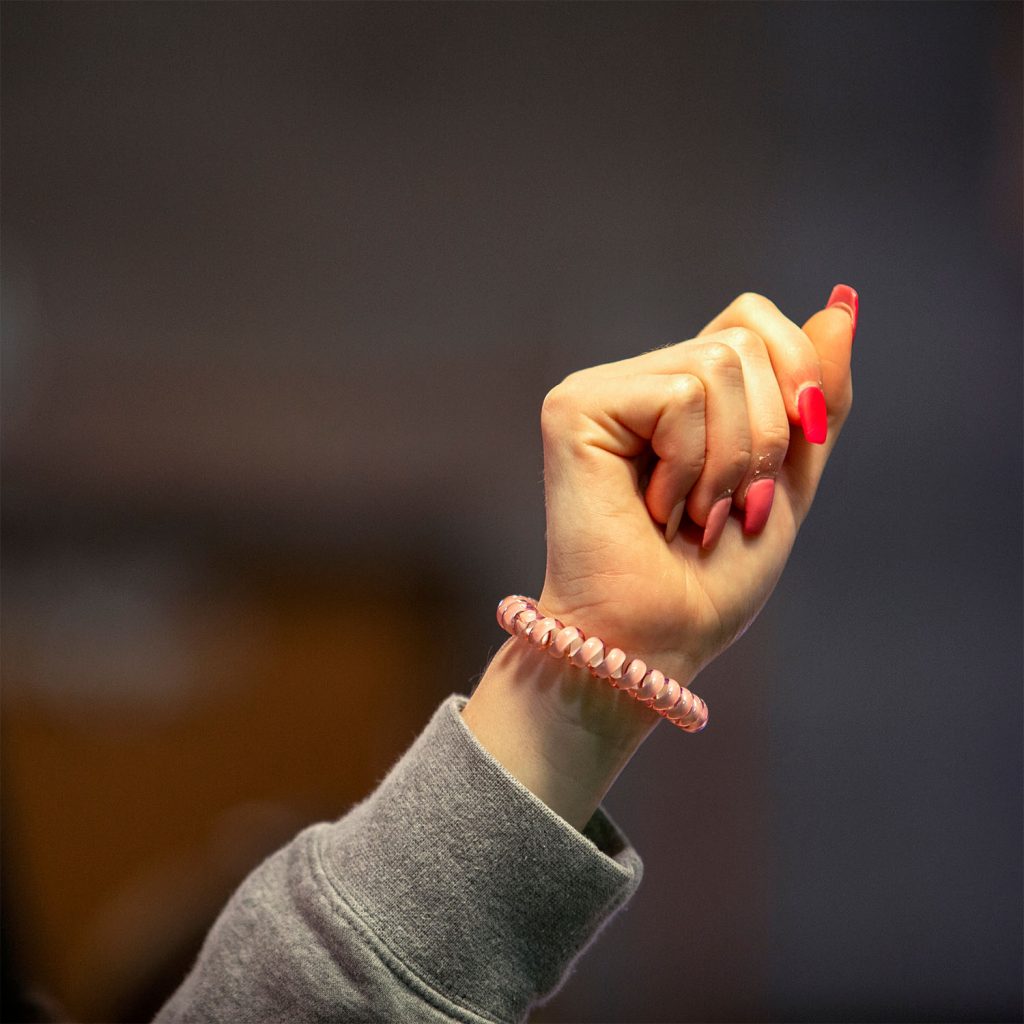 A student’s hand call for “quiet on set” during taping in the NewsChannel12 studio on Friday, Feb 5. Many students involved with the broadcasting program choose to work in the NC12 studio to build relevant skills for a career in broadcast. Others are volunteers with various majors who wish to learn some of those same skills in their free time.

WKU NewsChannel12 is a newscast that televises the week’s news from student reporters and anchors. The show is filmed live and streamed to the News Channel 12 Facebook at 1 p.m. each Friday. The production of the broadcast is a combined effort between student anchors, producers, photographers and reporters mostly from the School of Media. Stories are pitched by students and reporters on Mondays during news meetings, and the segments that come from those stories are stacked to create a storyline for Friday’s televised show.

Executive producer and senior Jeanna Kleine-Kracht assigns roles to student volunteers for each broadcast along with creating graphics and ensuring the script is ready for the anchors. The roles on staff include a floor director, camera operators, an audio tech, a teleprompter operator, the graphics coordinator and the talents. The 30-minute program showcases feature stories in addition to covering politics and events occurring on campus.

“The NewsChannel12 team has become family,” Kleine-Kracht said. “I never thought that when I first stepped in the studio, but I’ve found some of my lifelong friends that I can count on for anything — broadcasting related or not.” 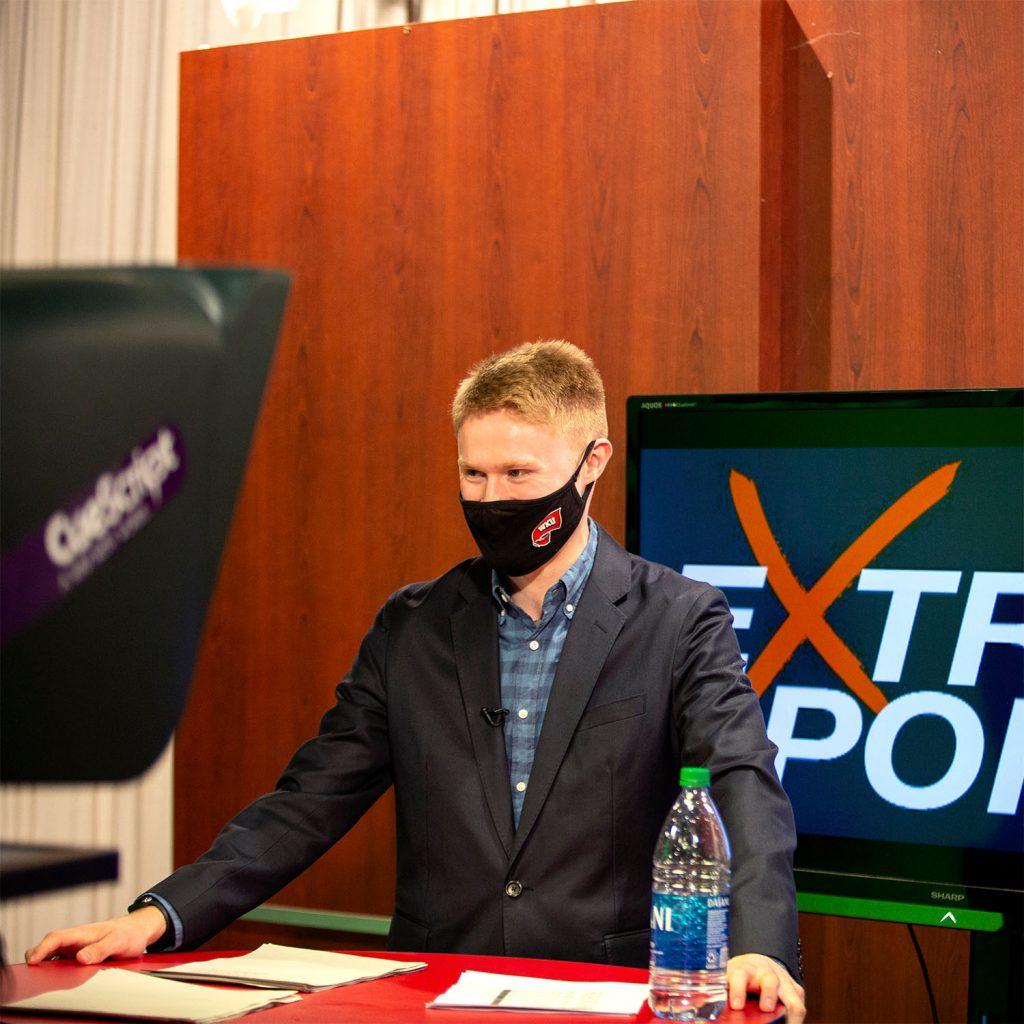 Owensboro junior Nick Brake, one of the hosts and co-producers of Extra Point, films a show at the NewsChannel12 Studio on Friday, Feb 5. Extra point is a student run sports broadcast which covers both WKU sports and local Warren County sports. 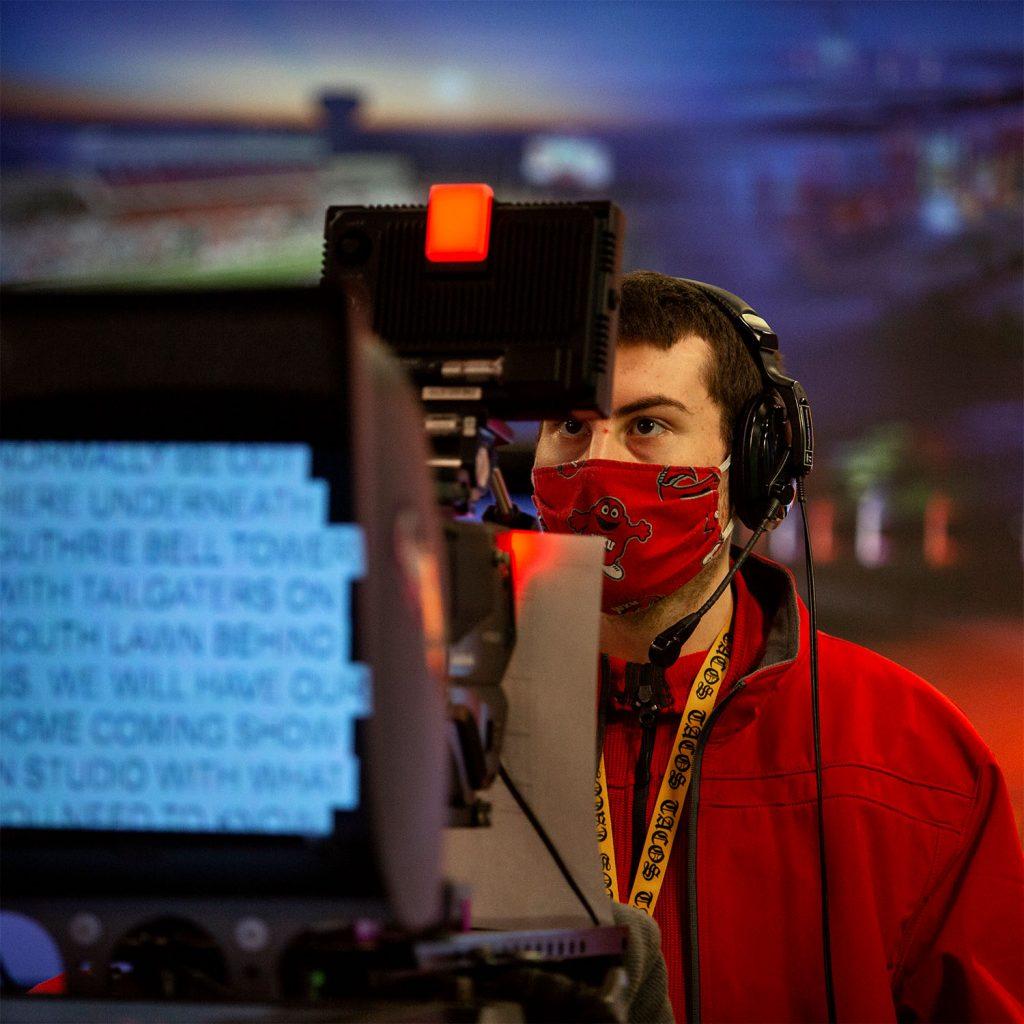 Lexington junior Blake Bethune operates the camera directly behind the teleprompter during a shoot for Extra Point on Friday, Feb 5. Extra Point livestreams to their Facebook page every Friday in addition to being featured after NC12’s broadcast.

Extra Point is a 30-minute student-run program that broadcasts sports highlights from WKU and Warren County. Like News Channel 12, the sports cast is filmed live and streamed to the Extra Point Facebook page. Co-executive producers Nick Brake, a junior from Owensboro, and Drew Brumfield, a junior from Louisville, cover sports highlights for the week that include football, basketball, volleyball and soccer. The program follows the live show of News Channel 12 at 3:30 p.m. on Fridays.

“Extra Point is an opportunity to be involved with elite-level sports coverage while still being in a setting where you can learn and grow from these experiences without the high stakes pressure,” Brake said. 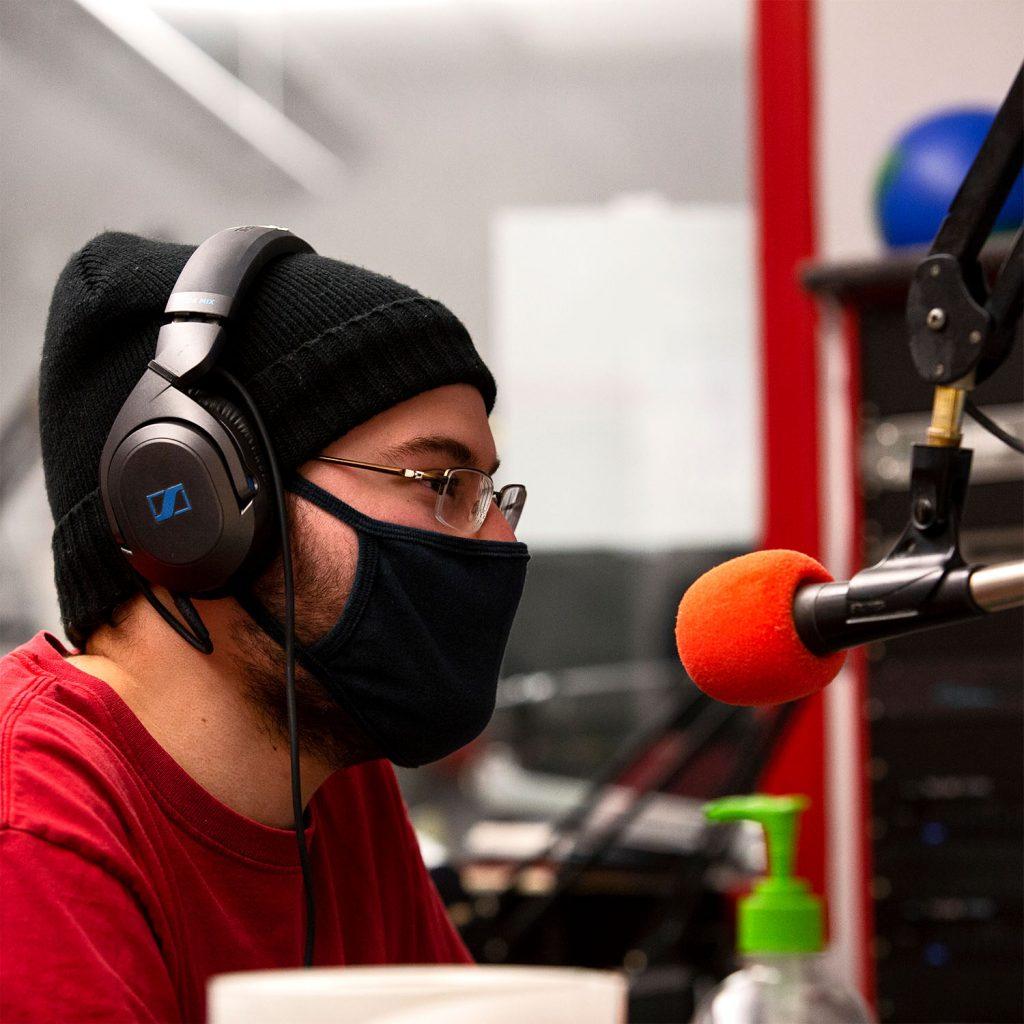 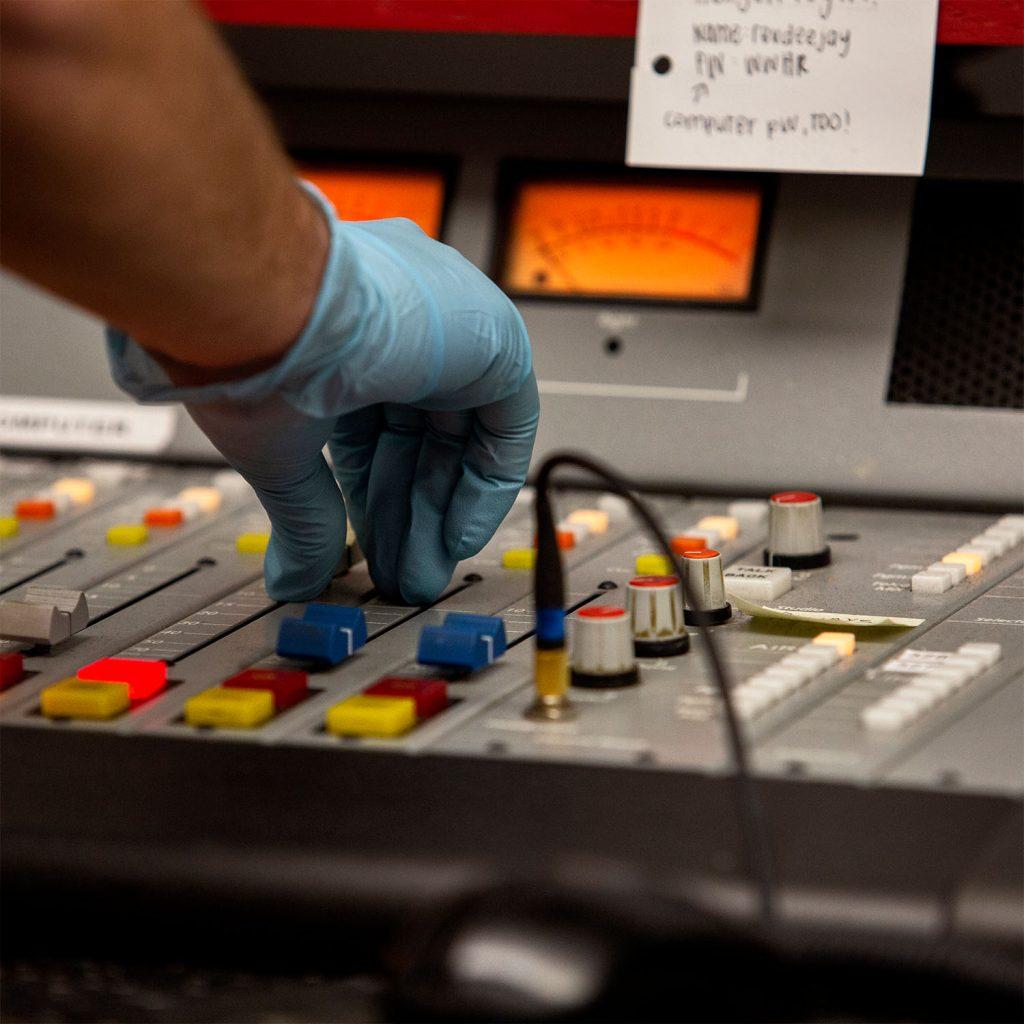 Campbell, who is also known as DJ Cole Train, checks sound levels during a music segment on Revolution 91.7. Campbell occupies a number of roles within the station, including programming director.

Revolution 91.7 is WKU’s radio station for alternative music as well as songs from less known, local artists. It is entirely student-run with student volunteers who take on shifts to experience what it’s like to be a DJ. Each student is able to cultivate their own distinctive style during their DJ breaks, where they provide a creative anecdote while reminding the audience that they are listening to Revolution 91.7.

Additionally, Revolution 91.7 offers positions for social media, podcasting and quality assistance that students are able to try. Photojournalism and journalism majors are also welcome during times when the station needs photos for their social media accounts and articles covering local artists and new alternative releases.

The station, known for playing Adult album alternative, was the first to play popular alternative rock band Cage The Elephant on air. Since then, the station has had a segment called “local shots” where they play songs submitted by local artists in the Bowling Green area.

“I always thought that radio was interesting because it felt more personal,” said Spencer Campbell, a senior from Shepherdsville and WWHR’s programming director. “Radio to me is about being able to broadcast the human idea rather than broadcasting the entertainment.”