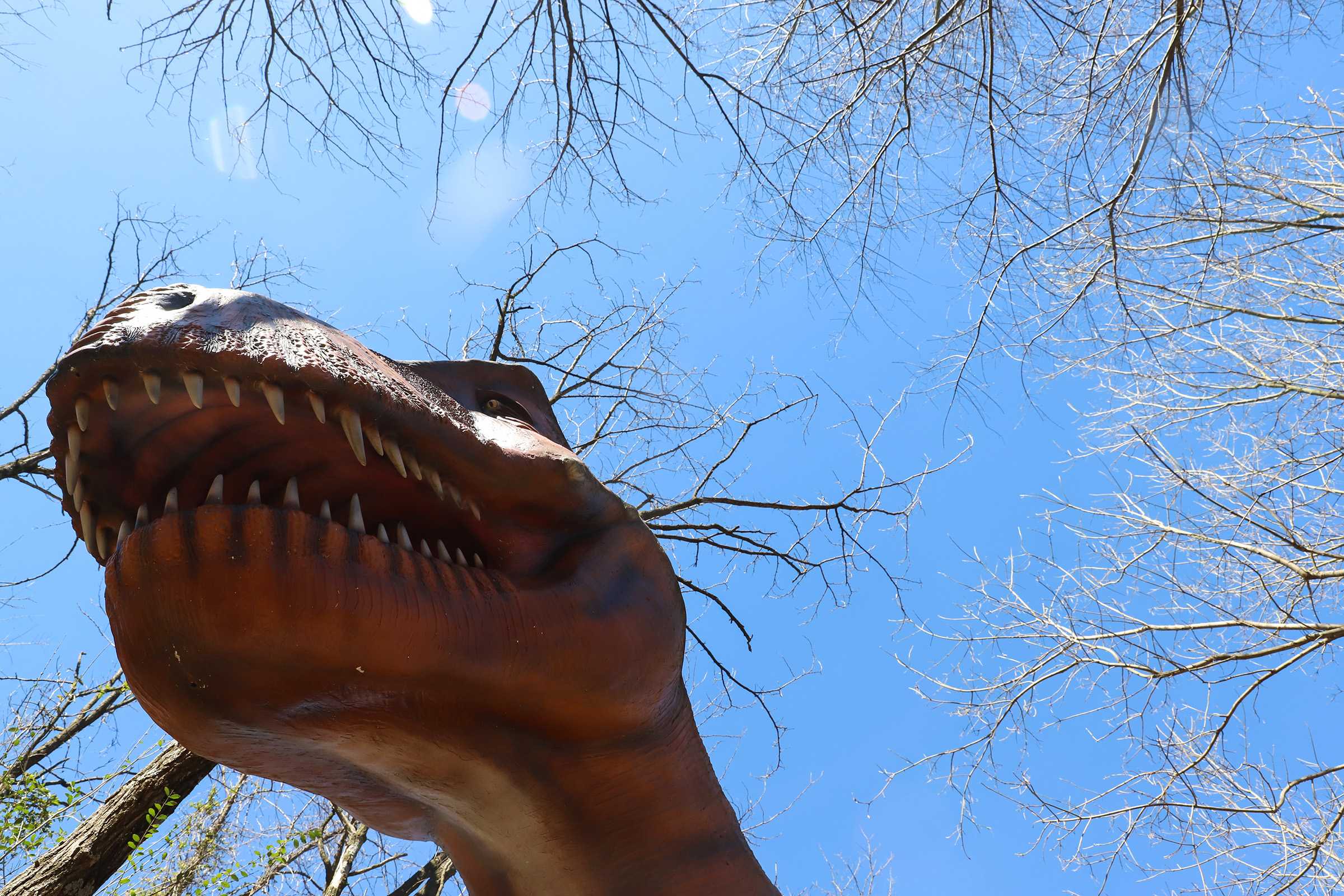 Families and couples gather at Dinosaur World in Cave City, Kentucky on Saturday, March 16, 2019. "I remember coming here with my family, and I want my son to be able to have that same exciting experience. We traveled from about 3 hours away just for this weekend getaway," said Tammy Johnson, a Kentucky native.

We went to Dinosaur World, and here’s what happened

On a bluff overlooking I-65 stands a 40-foot tall dinosaur replica, a familiar sentinel to those of us Hilltoppers who live somewhere northeast of Bowling Green. Accounting for the last three years of travel back and forth between school and home, I have met his watchful gaze dozens of times through my car windshield.

As I approach the end of my junior year and my time at WKU draws to a close, I decided it was finally time to pay a visit to the attraction that houses this imposing, enthralling figure. And so one Sunday morning, I embarked to Dinosaur World. My roommate and editor-in-chief of the Talisman, Hannah Good, accompanied me.

Dinosaur World is but one of many kitschy attractions right off the exit to Cave City, about a half-hour drive from campus, but with singular purpose we denied the charms of such alluring diversions as Guntown Mountain and The Ole General Store and pulled into the gravel parking lot of our destination. 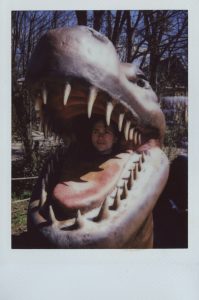 Perhaps it was years of conditioning from repeated viewings of “Jurassic Park”, or perhaps it was simply the aggressively-postured pterodactyl perched next to the welcome gate, but all the same, I was quite anxious upon our arrival.

Dinosaur World, as the latter half of the name implies, promises an entire ecosystem apart from reality right in its name, and this weighed on me as we made our way from my SUV to the front doors. A few families milled about the parking lot as well, seemingly unperturbed and going about the usual business of wrangling their young ones out of their car seats. Were they simply oblivious to the gravitas of the situation?

Nevertheless, before I knew it I found myself inside the gift shop, which one must traverse like the River Styx before entering Dinosaur World proper. In keeping with the Ancient Greek afterlife metaphor, Charon takes the form of a hapless, dark-haired man in a neck brace, and the fee to be ferried across is a little over $13.50 once you factor in sales tax. After paying, I was adorned with a fluorescent orange wristband, handed a map and directed out the double doors on the other side of the register to enter the new world that awaited me — Dinosaur World.

The first thing I saw exiting the gift shop was an enormous skeletal leg, standing as the lone dinosaur “artifact” among a playground, some picnic benches and a fossil dig activity. The accompanying plaque gave some scientific stats about the disembodied limb, but even so, I was disquieted by its looming presence just beyond the entrance.

Having decided that a couple of twenty-somethings would probably not be welcomed in the fossil dig or on the playground, Hannah and I followed the map and began the walking trail that took us through the forest where the dinosaurs themselves reside.

The trail followed a chronological path through the mesozoic era, starting in the Triassic, moving through the Jurassic, and ending in the Cretaceous. I assume this was to avoid any time paradoxes from collapsing the fabric of the Dinosaur World universe.

The first critters to greet us were frog-like creatures about the size of a large cat. The plaque explained that while these were not dinosaurs, they did live during the age of the dinosaurs. I guess “Dinosaur and Contemporary Fauna World” was too long a name to fit comfortably on a billboard. In any event, I was happy that they were included — they give depth to the Dinosaur World experience, and they have a very pleasant “smolness” to them, to borrow a word Hannah used to describe them.

We wound down the path, taking care not to miss a single dinosaur. Hannah and I marvelled at their strong legs and spiky tails, often openly giggling with delight. Sure, they weren’t perfectly painted, and their eyes had a distinctly dead look to them, but it’s impossible not to be amused in the face of life-sized dinosaur replicas posed as though they were innocently traipsing through the woods of Barren County. At the midpoint of the trail, another path branches off, curving through the trees to an unseen destination. At the end of that path lay the main attraction, the watchman, the monument, the Big Boy himself — the dinosaur beside the interstate. Named the Photosaurus, Dinosaur World’s nurturing spirit has allowed this specimen to “grow” to be 40 feet tall, much taller than any of the other dinosaurs in the park (and any real dinosaur that ever lived). While the others may have “scientific evidence” and “fossils,” Photosaurus has undeniable heft. I was honored to take a photo with him.

After visiting Photosaurus, we returned to our trek through time. A smoky haze wafted over the park as if to simulate the volcanically-active environment the dinosaurs would be more familiar with. Hannah’s comments on the dinos ranged from squeals of “ooooh look at the bois!” to “these are just birds.” We took photos with the celebrity dinosaurs, the Tyrannosaurus Rex and the Triceratops, and finally wound our way back to the top of the trail.

Within Dinosaur World, I truly felt transported back in time—not to the mesozoic era, but to a time when I could be happy walking around and looking at some life-size plastic replicas of dinosaurs. Dinosaur World doesn’t pretend to be a treasure trove of paleontological knowledge or a fully-immersive amusement park. It presents to you its honest self, a collection of sometimes awkward-looking, always-amusing dinosaur sculptures. It’s absurd, sure, but it’s also completely earnest, and it was the shot of unassuming wholesomeness I — and I think all of us — often need.