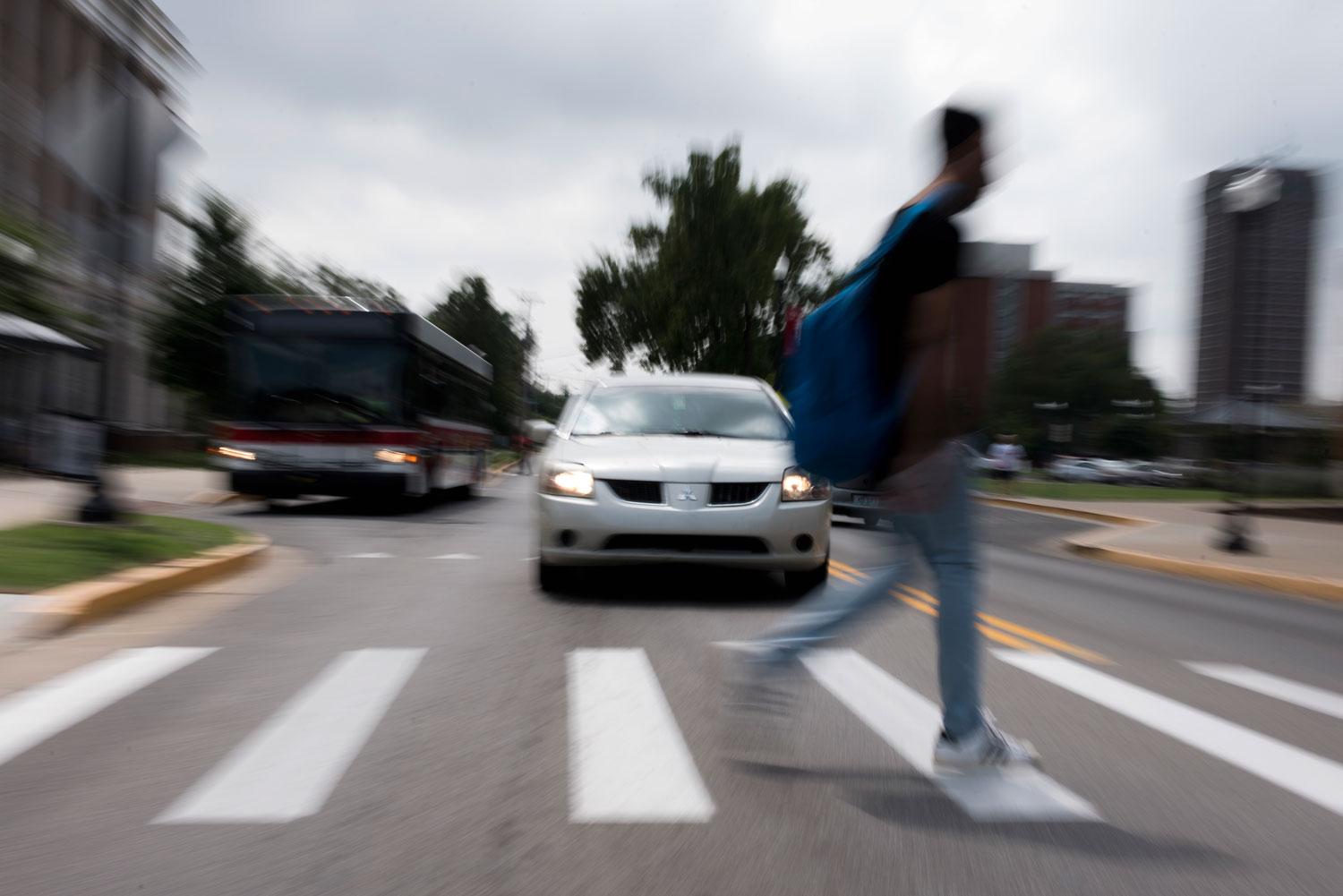 It was a dreary, rainy evening in the middle of April. I was inside the Adams-Whitaker Student Publications Center. As our Talisman meeting came to a close, I packed up my belongings, put my headphones in my ears and ventured into the darkness.

A crosswalk with a stop sign was waiting for me. After walking across the street, I needed to walk through a smaller crosswalk to get to Mass Media and Technology Hall. I had taken this route at least one hundred times. That night was no different.

Or so I thought.

A silver car pulled up to the stop sign, its headlights reflecting on the wet concrete. The car slowed to a stop, and I began to cross, my concentration focused entirely on the sidewalk on the other side.

I passed the double yellow lines, the halfway point. The silver car was now directly to the right of my body. I thought it would come to a complete stop.

Suddenly, a massive force collided into the lower right side of my hips. I lost my balance and tumbled to the pavement, succumbing to a solitary second of blackness.

As consciousness returned to me, I noticed my umbrella lying in front of me on the cold, damp concrete. The music I had been listening to was now replaced with the purrs of car engines and the splashes of tires driving over puddles. My headphones had fallen out of my ears.

Across from me, a car waiting to pull out of the parking lot next to Mass Media was completely stopped. The driver had rolled down his window and was gawking at me.

Everyone waited to see what I would do next. It was a nightmare, like I transformed into a bug being examined under a microscope.

The driver of the vehicle who hit me, a middle-aged woman with long, wavy dirty-blond hair, rolled down her window and spoke to me like a concerned parent.

What was I supposed to say? I felt no aggression toward her — only a strong desire to forget what had happened. I didn’t crave retribution or explanation. I just wanted to leave.

In truth, I had no idea whether or not this was a lie.

“Are you sure?” the woman who had just hit me continued. “You probably need to go to the hospital.”

“No, I’m fine,” I assured her, although my extreme soreness and my weak voice said otherwise. “I promise.”

As I took my first steps toward the sidewalk, I felt incredibly painful swelling in my right foot. Regardless, I hobbled across the road and continued to the sidewalk.

The driver of the silver car persisted. She pulled into the front of the parking lot where I was crossing and asked me the same question again.

“Honey, are you sure you’re okay?”

She rolled her window back up. Quickly, she pulled back out of the parking lot and drove away. I had no idea where she went, but I really didn’t care.

I entered the Mass Media lobby and stopped, the realization of what happened hitting me like a pile of bricks.

I immediately called my dad. When I told him what happened, a volcanic eruption of concern and fear unleashed within him. He told me to call the campus police department.

Suddenly, the driver who hit me bolted through the doors of Mass Media. She gave me a hug, and we decided that she was going to take me to the hospital.

On the drive there, the woman told me that she was a professor at the university and had been for many years.

I told her about my 8 a.m. class the next day, and she asked for the professor’s name.

The professor dropped me off at the front of the emergency room and went to park her car. I limped into the hospital and up to the front desk. There was a young woman working at the desk. She handed me several forms to fill out. I did so and took a seat in the waiting area. By this time, the professor had parked and found me inside.

She borrowed my phone and called the Bowling Green police. The police transferred her to the campus police, and the dispatcher told her that they were sending an officer to the hospital.

All of a sudden, at least ten minutes after finishing her phone call, the professor blurted out the funniest sentence that could have been said in that situation.

“I think we’ve reached the point where we should take a selfie,” she said.

We had a good laugh and took a selfie together. More than five months after the accident, I still have it saved on my phone.

When I finally saw a doctor, he told me it was bruised but not broken, and he prescribed me pain medication. I was released from the hospital not long after.

The professor I had just met hours earlier stayed by my side the whole time. She even drove me back to campus and stopped at Walgreens on the way, so I could fill my prescription.

Maybe it wasn’t the way I planned to spend my Monday night, but I learned there are still kind people in this world — even if they sometimes accidentally hit you with their cars.