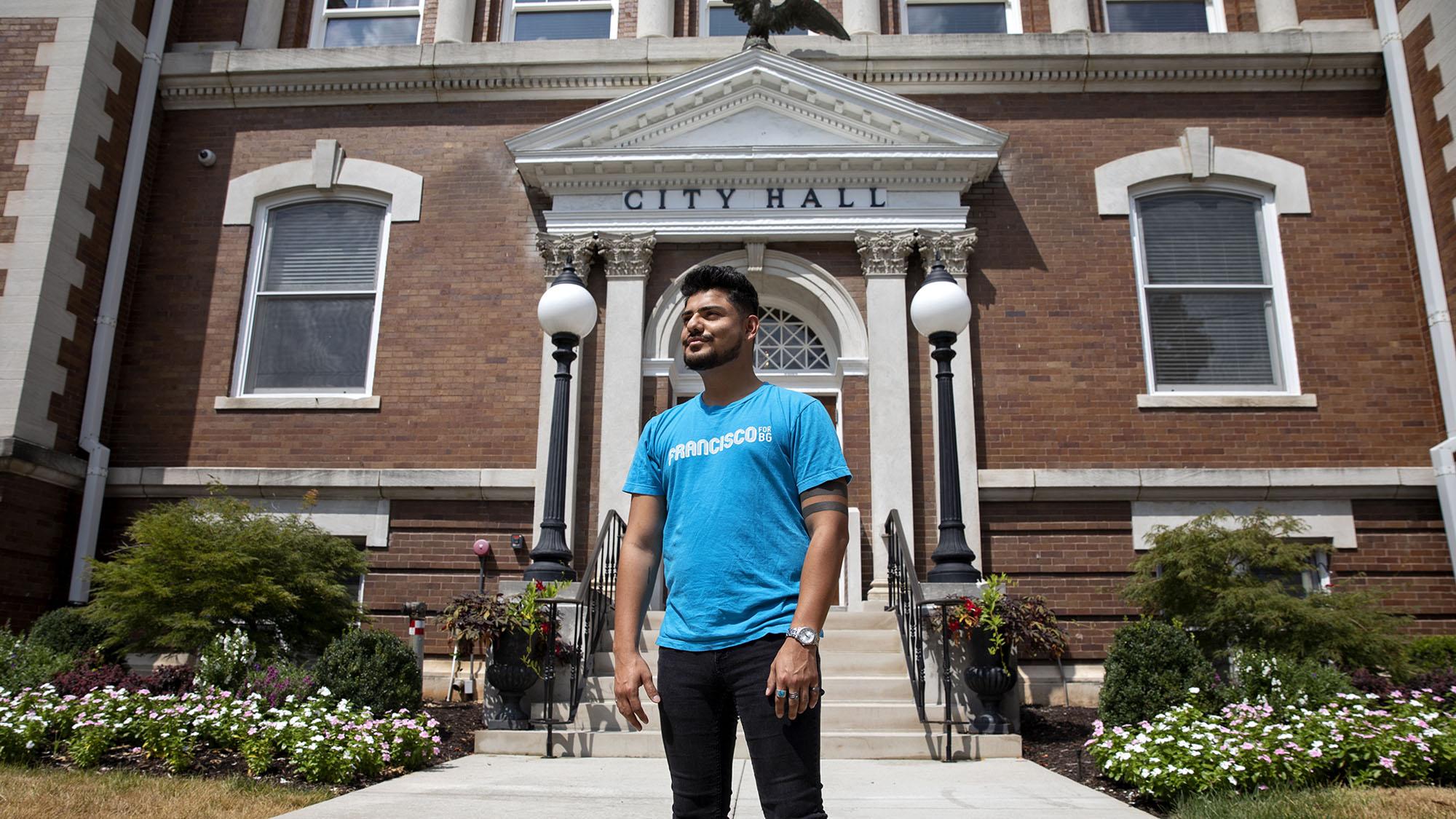 After school on Wednesday, March 30, 2016, a 10-year-old Latina girl crossed Gordon Avenue in Bowling Green under a warm sun and blue sky that was dotted with thin clouds. On her way to Scott Way where she lived, the sister of five siblings was hit by a Chevrolet Trailblazer. The wind blew through onlookers’ hair as they watched the little girl die at the scene — a school zone that was supposed to be safe for students.

That little girl was the cousin of Bowling Green City Commission candidate Francisco Serrano, and her death changed his entire world. From that day forward, Serrano became involved in politics, rallying together with his community to get the road shut down.

“I was not always political,” Serrano said. “Our community rallied together and shut the road down. We fought for months to get a stoplight: justice for her and a child that had died at the same spot, in the same way, 30 years before.”

Now, at 25 years old, the Bowling Green native is running to be the youngest and first Latinx Bowling Green city commissioner. Serrano, a criminology alum of WKU, identifies as a straight Christian male, and he uses he/him/his pronouns.

“I grew up across the tracks, and I have firsthand experience of what a united community can accomplish,” Serrano said. “I’m a first-generation, nontraditional college student who has worked in factories, law offices and at our state Capitol. Now, I work on the front lines as a contact tracer, fighting the pandemic.”

Serrano’s mother and father immigrated to the United States from El Salvador in the 1990s amid the civil war in their home country. Now, Serrano is taking his experience growing up across the tracks and rallying the city for change after his cousin was killed with him to lead the people of Bowling Green.

Serrano thinks it’s best when elected officials have things in common with the people they represent, he said.

“It’s easier when we can trust our leaders to act like we would,” he said.

Lafayette, Louisiana, senior Ashlyn Jones became a day one supporter of Serrano’s campaign after seeing the work that he has done for the Bowling Green community and from being close friends with the candidate. Before the launch of the campaign, Jones helped brainstorm a vision, and she helped set up the field program, which includes door-knocking and phone calls in order to more personally connect Francisco’s campaign with Bowling Green residents. She now volunteers to phonebank on her days off, calling residents that can’t be reached by door-knocking to speak about the campaign.

“Francisco consistently shows up to fight for people he hasn’t even met because it’s the right thing to do, and I know he’ll bring that same energy into our city commission,” Jones said. “He has a unique perspective to bring to the table, and his vision for making Bowling Green better needs to be heard.”

Serrano’s team is comprised of members of the LGBTQ+ community, Black people, Muslims, autistic people, multiracial people and more who represent other communities. Francisco’s campaign manager and WKU alum, Francis Wilson, has been working with candidates under the age of 30 all over the nation for the past two years.

“I am uniquely positioned to help him tell the story and make the change that he wants to make,” Wilson said. “I know how hard it is for young people to be where he is in politics.”

“We have faced incredible obstacles,” Wilson said. “We have people from all spectrums of life and experience in the political space — facing racial profiling, not having rights under the law as queer people, and not being provided adequate accessibility as disabled people. Our team represents the change that we want to make, and we represent the change that is possible. That’s why we’re expecting to win.”

The campaign is soon to announce a post-COVID-19 plan, as well as a plan focused on community relationships with police but is currently focused on their Building BG Plan.

“Our campaign just launched our plan which looks at the intersection of life and infrastructure — bridging the gaps on issues like cut-throughs, pedestrian crossings, transit and project bidding,” Serrano said. “We understand that how our city is built affects how we live, work, study and play.”

Serrano started this campaign in order to be proactive in Bowling Green and serve as a voice for the vulnerable members of the community. He said his credentials and personal experience make him qualified to make the change that is needed.