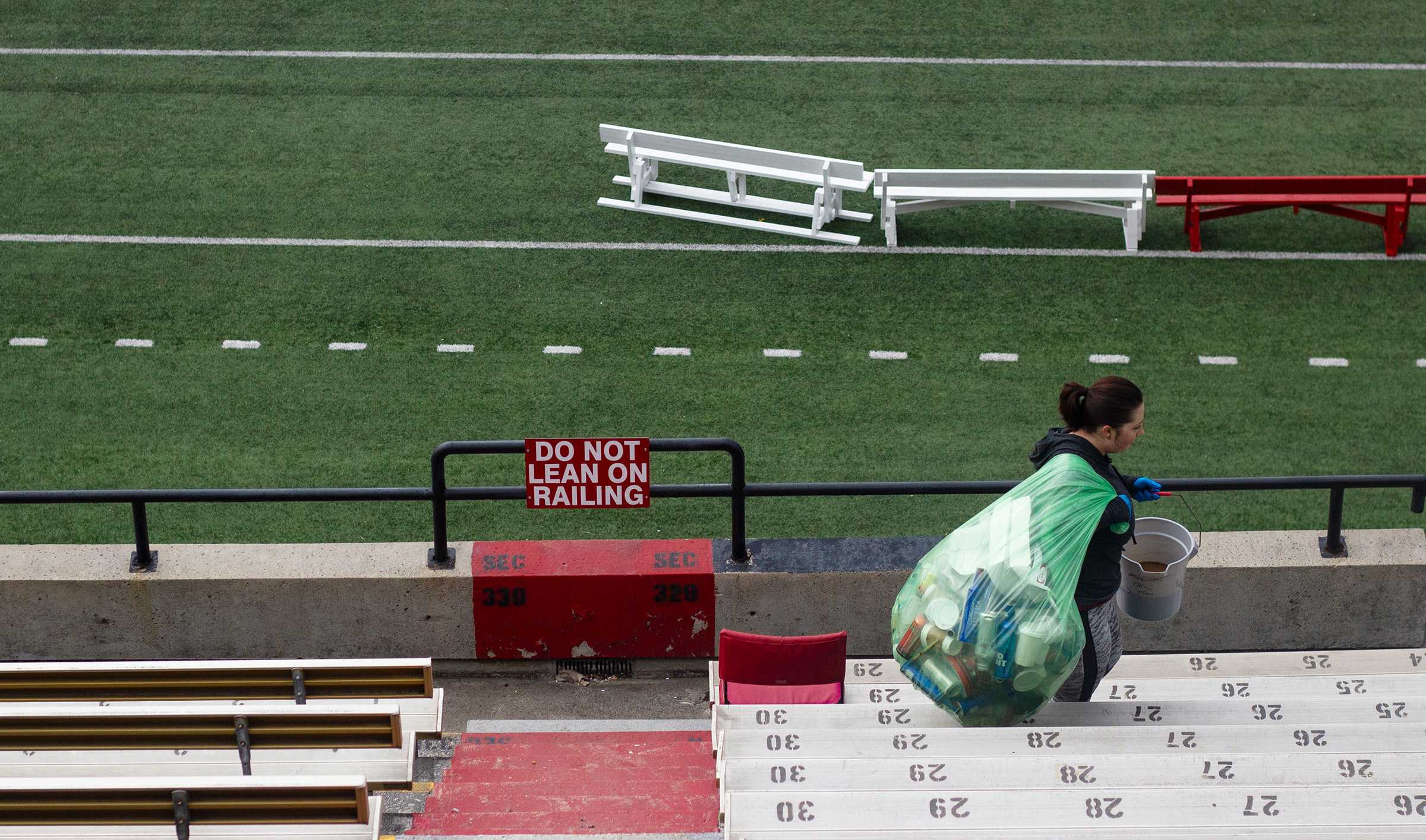 In the hours following the Saturday night Homecoming football game, the stands in Houchens-Smith Stadium stood abandoned by rowdy fans and littered with beer bottles and containers of nacho cheese. In the past, that waste went directly to the landfill, but Facilities Management and Athletics teamed up last year to create a program that diverts a large portion of that waste from the landfill to recycling.

The Diddle/Smith Recycling Program recruits student and community organizations to clean the Houchens-Smith stadium and Diddle Arena after every home game. During the 2017 football season, the organizations collected and recycled 20,326 pounds of recyclables, which would have otherwise been added to the 33,692 pounds of waste that were sent to the landfill — a 37.6 percent waste-diversion rate, according to data provided by the WKU Resource Conservation. That means 37.6 percent of the total trash picked up at the events was diverted from being taken to the landfill to being recycled.

“It’s a substantial savings for athletics and a substantial growth for us as a program,” said Richard Cowan, director of Environmental Services.

The program was originally proposed by Cowan, which led to Facilities Management piloting the program at the last two basketball games of the 2017 season. Cowan said the turnout was successful, and they received great feedback from Athletics.

Cowan said before WKU Facilities Management and Athletics partnered to create the new clean-up program, Athletics was using a contract labor company called Clean Freaks. During a contract renegotiation period between the university and Clean Freaks, the company was not willing to recycle any of the trash from the games without a large price increase, so the university decided to end the contract.

Elizabeth Gafford, the coordinator of Resource Conservation, is one of the faces behind the program. She said most organizations initially come to earn service hours but leave with a donation, a free recycling T-shirt and a greater knowledge about what can and cannot be recycled.

“We’re investing in student organizations by providing opportunities for them to create the WKU they want to be a part of,” she said.

Gafford said her favorite part about the program is that the volunteers are trained and leave with the skills to recycle confidently. 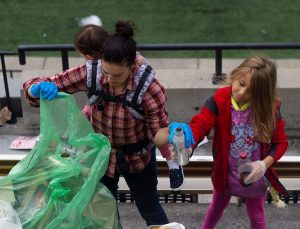 Stacy Cox carries her daughter Ava while she and Kyla Cowan work together in the top section of the bleachers. “It feels great to help out, and we actually had fun,” Cox said. “If there weren’t many people, it would take all day, but we were able to do it in just a few hours.” 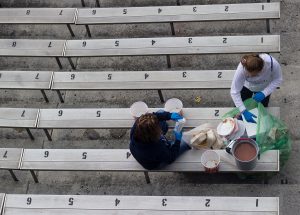 Volunteers sort trash in Houchens-Smith Stadium Oct. 28 following the Homecoming football game the night before. The program is part of an effort to reduce landfilled waste by WKU, and the groups who volunteer receive a donation. 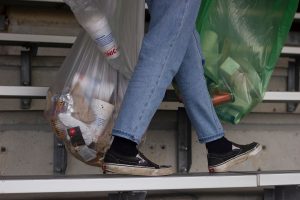 Volunteers separate recyclables and pour out liquids from trash. The materials were weighed by student workers and staff from the Recycling Program at WKU.

To volunteer, organizations must have a minimum of 30 people or sign up as a smaller organization and be paired with another. Facilities Management provides the tools and cleaning supplies necessary and a brief training of what to expect. Volunteers are instructed to pour all liquids into a bucket to significantly decrease the weight added to the landfill bags. Less weight means less money the university must spend.

Based on the 2017-18 basketball season, the program saved the university $16,300, and volunteers achieved a 79 percent waste-diversion rate, meaning 79 percent of the total trash picked up at the events was diverted from being landfilled to being recycled, according to WKU Resource Conservation.

“You hear a lot about budget cuts,” Cowan said. “Well, this is how we help save the university some money.”

Before the cleaning starts, the staff explains the process and the most efficient way to get it all done. Gafford said she recommends cleaning one section at a time and splitting up each group to start at the ends and meet in the middle. Afterward, a custodial supervisor does a full check to make sure the clean-up meets standards.

“The more people you get, the less time you’ll be here cleaning,” Cowan said.

As for the 2018 football season so far, there were 12,780 pounds of landfilled waste and 9,310 pounds of recyclables captured from the first two home games. A remaining 1,132 pounds consisted of food waste, like liquids, that was diverted from the landfill and discarded down a drain.

“The goal is to have as many organizations participate as possible,” he said.

Gafford said many of the organizations that volunteer have taken their funds and either given back to the community or created scholarships. WKU’s Transgender and Non-Binary group used its funding to create a “transitioning closet,” which provides clothes for those transitioning from one gender to the other.

“I was surprised at the amount of trash we picked up,” he said. “The program helped me be able to identify what is and isn’t recyclable.”

Clark said it’s cool to be able to do something good for the community and get something back for it, too.

“It really means a lot to our club to have that opportunity,” he said.

After the clean-up has finished, the organizations get together for a group photo and to discuss how the program can improve. Gafford said they are always striving for improvement.

“You’ll gain a different respect for being out there and picking up your trash when you leave,” Cowan said.

Facilities Management is always looking for organizations eager to volunteer, and signing up is the first step toward earning the donation and learning more about campus sustainability.

“It helps get the word out to the community, to the campus and to students,” Gafford said. “It’s been a great partnership since the beginning.”