From the magazine: Time to parent

Lauren McClain, a sociology and criminology professor, has an office tucked into a fluorescent-lighted tile hallway within the walls of Grise Hall. Her office is small. At the back of the room, a bookshelf stands, brimming with books and small momentos. Across from the bookshelf sits her desk with a computer on it, open to a lengthy document and beeping intermittently with emails. The desk is scattered with endless papers, and placed on top is a wooden picture frame that reads, “Mommy and me,” showcasing a picture of her and her young daughter. Above the desk is a cabinet decorated with family pictures that shine in the bright lighting.

Before 2020, WKU abided by the Federal Family and Medical Leave Act, which came to be in 1993, to support expecting parents, which allotted eligible parents 12 unpaid weeks off. The policy was applied to all eligible employers, which includes universities, across the U.S., not just WKU.

McClain was 20 weeks pregnant when she began her career at WKU in 2012 and personally understood the need for a mandated parental leave policy that would explicitly grant faculty consistent time off when they were expecting a child.

“When I became a parent, it was so hard,” McClain said. “It was such a learning curve.”

McClain quickly discovered that WKU instead abided by a sort of “unpolicy,” meaning that no mandated policy was implemented specifically for WKU faculty needing time off for the arrival of a child. McClain attempted to negotiate a deal for time off with the head of her department, as was commonplace in lieu of having a policy. Since then, McClain has become a source of information for expecting parents as chair of the Faculty Welfare and Professional Responsibility Committee of the Faculty Senate. 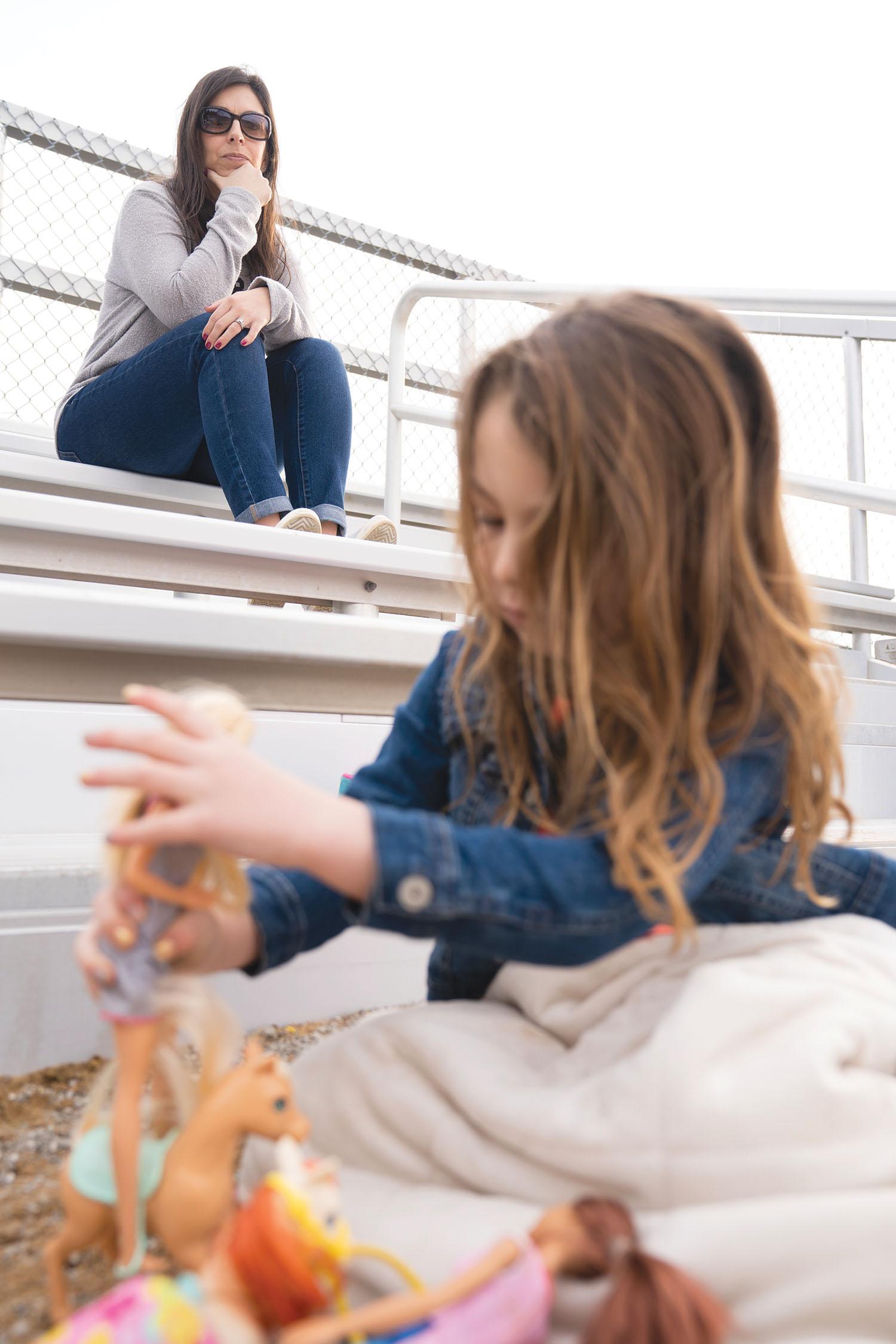 McClain holds her daughter, Tenley, before her son Tristan’s baseball practice on March 1. “I was 20 weeks pregnant when I started at WKU, and I was shocked to learn that we didn’t have a formal parental policy in place,” she said.

McClain has now talked to a plethora of expecting mothers on campus about the need for a policy on campus.

“Not having a policy was leading to a lot of inequity on campus,” she said.

The more McClain heard about the lack of a policy and the wide array of benefits such a policy would bring, the more eager she was to do something at WKU.

McClain said she’s someone who doesn’t take no for an answer. However, she asserts the importance she finds in encouraging people to “be human,” and give parents the necessary time off work to bond with their new children.  Pulling from these attributes of her character, McClain spearheaded the initial creation of WKU’s paid parental leave policy in spring 2019 with large amounts of support from the Faculty Welfare and Professional Responsibilities Committee — they had started from nothing. Tony Glisson, director of human resources, was helpful to McClain and the committee as they set about drafting their work into policy language, McClain said.

The new policy on campus sets defined parameters, such as paid leave, specific to WKU for expecting parents.

“Before, it wasn’t structured and didn’t have the boundaries and guidelines of a policy,” Glisson said.

Parents used to be tasked with negotiating unpaid time off with the head of their department. Time off fluctuated between departments, which promoted a sense of inequity on campus, McClain said.

“We’ve never had any kind of maternity or paternity leave at all — it didn’t exist before now,” McClain said.

Deborah Shivel, an instructor in the Fashion Merchandising Department, adopted her son Matthew in 2003. He was 11 months old when the adoption was finalized. At that time, there was no recognized parental leave policy for faculty specific to WKU, and as an expecting parent, Shivel was not overly concerned with negotiating the terms of her leave.

“I was more focused on the adoption part of it,” Shivel said.

Shivel was granted one semester off, unpaid. She was also guaranteed her job after her time off ended. At the conclusion of that one semester, Shivel wanted more time at home with her son, but the department head told her that was not possible and that she had to come back. She did not go back — however, she was rehired several years later.

“Adoption is incredibly expensive anyway, and then when you have the stress of losing an income, it multiplies that stress,” Shivel said.

McClain thinks the lack of a policy on WKU’s campus is anchored in beliefs constructed decades ago.

“That just isn’t the reality of our economy anymore,” she said. “Frankly, I think that some of it is that some people are just set in the past.” 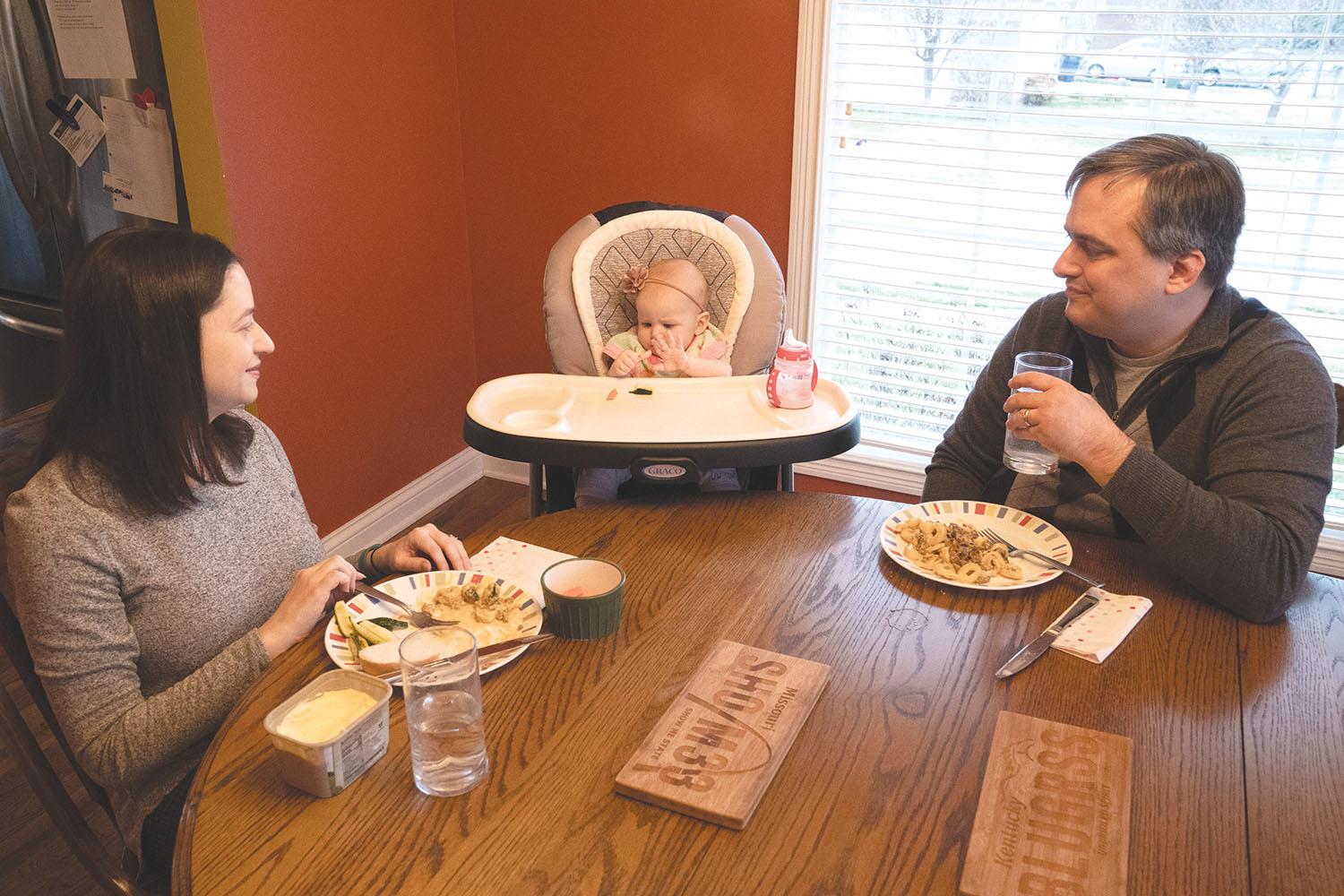 Daniel Clark, an assistant professor of mathematics, has dinner with his family on March 9. Clark said this policy was great for him because he is able to stay at home and take care of his daughter while his wife works.

Natasha Gerstenschlager, a math education professor, had her first son in the fall of 2018, before there was any campus-mandated policy on paid parental leave for faculty. Her office walls are decorated with multiple professional certificates complemented by pictures of her son — one small photograph sits directly in front of the monitor on her computer. Now, as the policy is being officially implemented on campus, she is expecting another child. The policy will afford her relief in maintaining her professional career.

“This policy allows for you to stop working and have documentation of that happening,” Gerstenschlager said.

Balancing motherhood and her career is essential to Gerstenschlager. At the beginning of the spring 2020 semester, before the policy was approved, her 18-month-old son developed a small fever during the week. Gerstenschlager, set to teach the following day, had a conversation with her husband, who had an important meeting the next day.

“Our compromise was that my son came to class with me,” Gerstenschlager said. “I taught with a baby on my hip.”

The U.S. was the only one of 41 countries in the Organization for Economic Cooperation and Development that didn’t have a federally-mandated paid parental leave policy set in place, according to a report from the organization in 2018. In December, a new spending bill gave way to 12 weeks of paid parental leave for federal workers.

“We don’t really value the family as it is, which is usually two working parents or single parents who need time to take care of their babies,” McClain said.

In his 2018 State of the Union address, President Donald Trump included a statement on paid parental leave, expressing the importance of supporting working families through paid leave. As of February 2020, the Trump administration has endorsed a specific paid parental leave policy for federal employees, which has been claimed to have bipartisan support.

“If you listen to the candidates that are running now, it is becoming more of a priority,” McClain said.

Sen. Bernie Sanders, a former candidate for the 2016 and 2020 Democratic presidential nominations, had a statement on his website that expressed the need for guaranteed leave for working people, not only mothers.

“Even same-sex parents who have to go through a legal process after the baby is born, we recognize that you’re the parents,” McClain said. “Any parent is covered under this policy, regardless of gender or sexual orientation.”

The parental policy goes even farther, including not just same-sex parents but also new fathers.

“What we argue, and what’s in our policy, is that it’s open to men too.” McClain said. 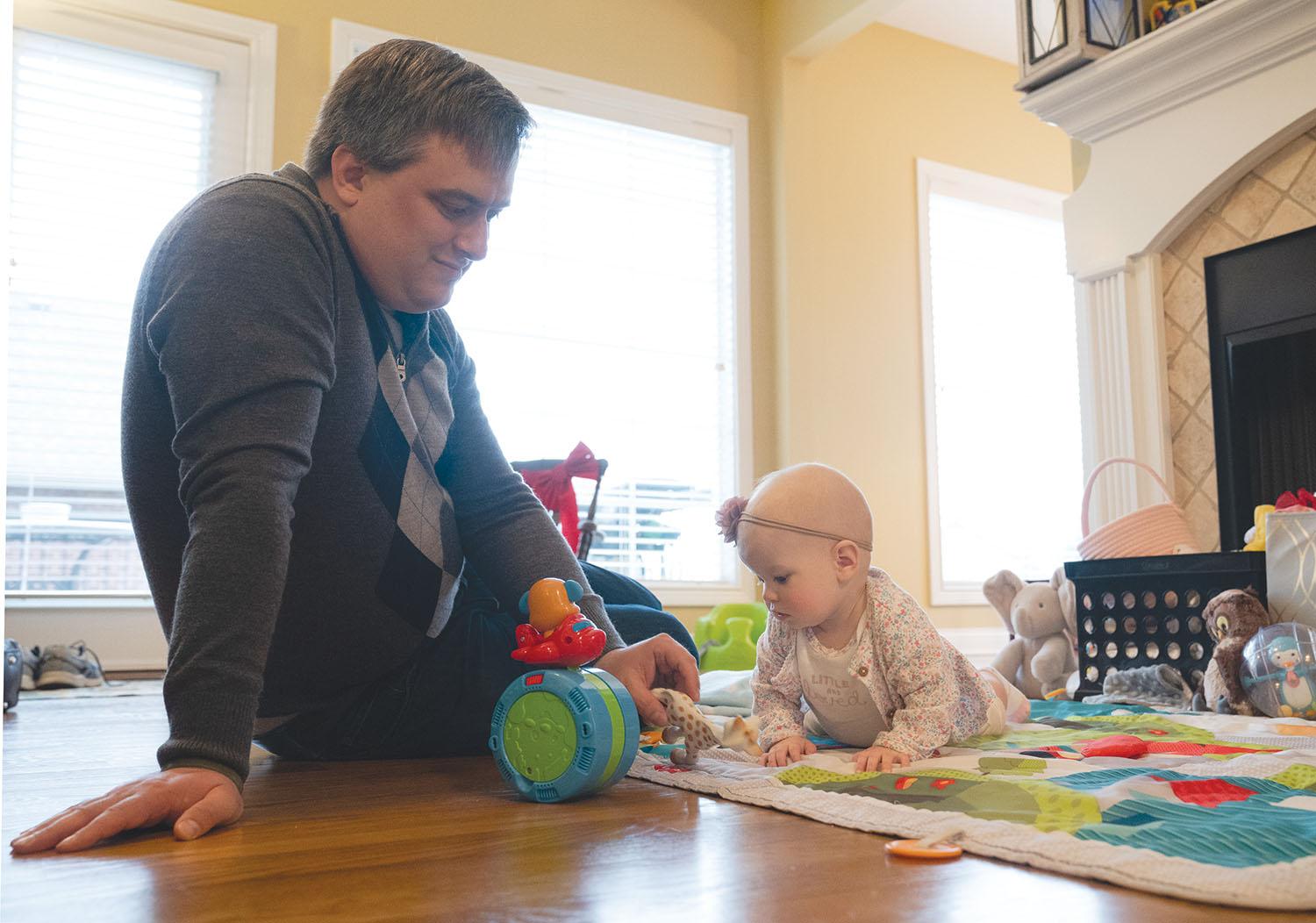 Clark spends time under the paid parental leave with his 7-month-old daughter on March 9. “I always knew that being a parent was a full time job, but I don’t think I realized to what extent until I had a child of my own,” he said.

By not allowing a father the same time at home with their new child, their involvement is subdued, and the scope of the inequity is furthered, McClain said.

“Those first few weeks are crucial for men to get their feet under them and feel confident in their ability to be a dad. It’s important that they have that time off at the beginning to learn how to be a parent,” McClain said.

McClain said there are at least 80 universities that have a parental leave policy in the nation. The enactment of this policy has placed WKU at the beginning of regional universities implementing more accommodating policies.

“These young faculty are our future and providing benefits to help them throughout many stages of their careers is mutually beneficial and forward looking.”

“We’re the first university in the state of Kentucky that would have this generous of a policy,” McClain said.

The policy has been well-received by administration at WKU.

“I’m thrilled that we have been able to develop and implement a parental leave policy that provides the time and resources to be supportive of young families!” Provost Cheryl Stevens said in an email interview on the passing of the policy. “These young faculty are our future and providing benefits to help them throughout many stages of their careers is mutually beneficial and forward looking.”

The Faculty Senate convened on Feb. 20 to vote on the dismissal or approval of the paid parental policy within the wooden walls of the Faculty House. Six long wooden tables were surrounded by red chairs filled with faculty. McClain was seated near the center of the room, near the center of her table. At close to 4 p.m., McClain presented the parental policy. Hard copies of the policy were passed around the room by Vice Chair Margaret Crowder and, quickly, a question on the semantics of semester weeks within the policy rose to the surface. The three semester weeks in January during winter break would be included in the policy’s proposed 16 weeks of paid time off work. For staff, who already received 12 unpaid weeks off, an additional four weeks of paid leave was added.

For a while, it seemed as though the policy would be thrown back to the Council of Academic Deans for approval of the proposed amendments. However, clarification from Provost Cheryl Stevens quieted any nerves, and with a swooping of raised hands, the policy was passed. Then, on March 4, President Timothy Caboni officially signed off on the policy.