Pioneer Cemetery sits on Fifth and College streets. It occupies a whole block with its weathered stones and deeply rooted trees. Lichen and moss creep up the headstones, some of which have been made completely unreadable by decades of rain and wind. Despite the wear and tear, this is one of the most important historical locations in Bowling Green, because it holds many of the people who made the city what it is today.

The average person doesn’t know too much about Pioneer Cemetery. I find I often have to describe it to people by what’s around it, like how it’s right across from 5th Street Diner. From younger people, I’ll often hear that slaves were buried in the cemetery in unmarked graves, which is true. Older folks will sometimes know that the founder of Bowling Green was buried there, which is also true.

Cemeteries and burial places can frighten people sometimes, or come off as too morbid. That’s never been my perspective on it. I think they’re a place of connection, something that ties us to those who have passed, even if they died 200 years ago.

I always liked walking through the cemetery. It’s generally quiet except for the nearby cars. There’s a bit of fun in looking at the stones from different angles, trying to make out carved letters and wondering if you’re the first person in 150 years to say that person’s name aloud. I even took a date there once to walk through. It was very cold, and, in hindsight, I think I was the only one of our pair who enjoyed it.

However, I hadn’t looked much into it until one night when I was procrastinating work on an essay. I decided to research the cemetery as much as I could and found something disappointing. In such a modern age, little information about the cemetery was available online. Most of it was hinted at on websites with no sources to back up the information.

Being a good student of history, I stayed up the whole night finishing my paper in one tab and reading about the cemetery and compiling notes in twelve others. That morning, I biked down to the First Presbyterian Church, which originally started in that cemetery, to see if I could find a church historian or anyone else who could answer my questions about the cemetery.

I made the acquaintance of Thomas Moody, the organist and a long-time member of the First Presbyterian. He and other members of the church were very gracious and painted a picture of the early church and the grounds it stood in.

The story of Pioneer Cemetery is more than old bodies under faded headstones nourishing the roots of old trees. It’s far more than an end destination; it’s the starting point of Bowling Green.

The founder of Bowling Green, Robert Moore, set aside the land as the public burial ground. He himself is buried there now. The first records of the cemetery started in 1811 with the purchase of two lots. Lots refers to sections of more than two graves, Fairview Cemetery Office Assistant Terri Holl said. She said it was common at the time for lots to be purchased for the whole family when one member needed to be buried.

If you went to the cemetery and were able to make out names on the Pioneer headstones, you would find the same practice in use. Not only will a man and his wife be buried side by side, but other family members will be around in the same area as well. Along with traditional headstones, there are also above ground vaults made of stone, a burial method used by the Presbyterians.

You might be tempted to peer into the large cracks on some of these vaults, fearful yet curious enough that you may see … anything. You’d be disappointed. You’re looking where dirt, weather, insects, animals and more dirt have been gathering for the last 200 years. The curiosity is natural though — after all, the human body spends a lot more time dead than it does alive. 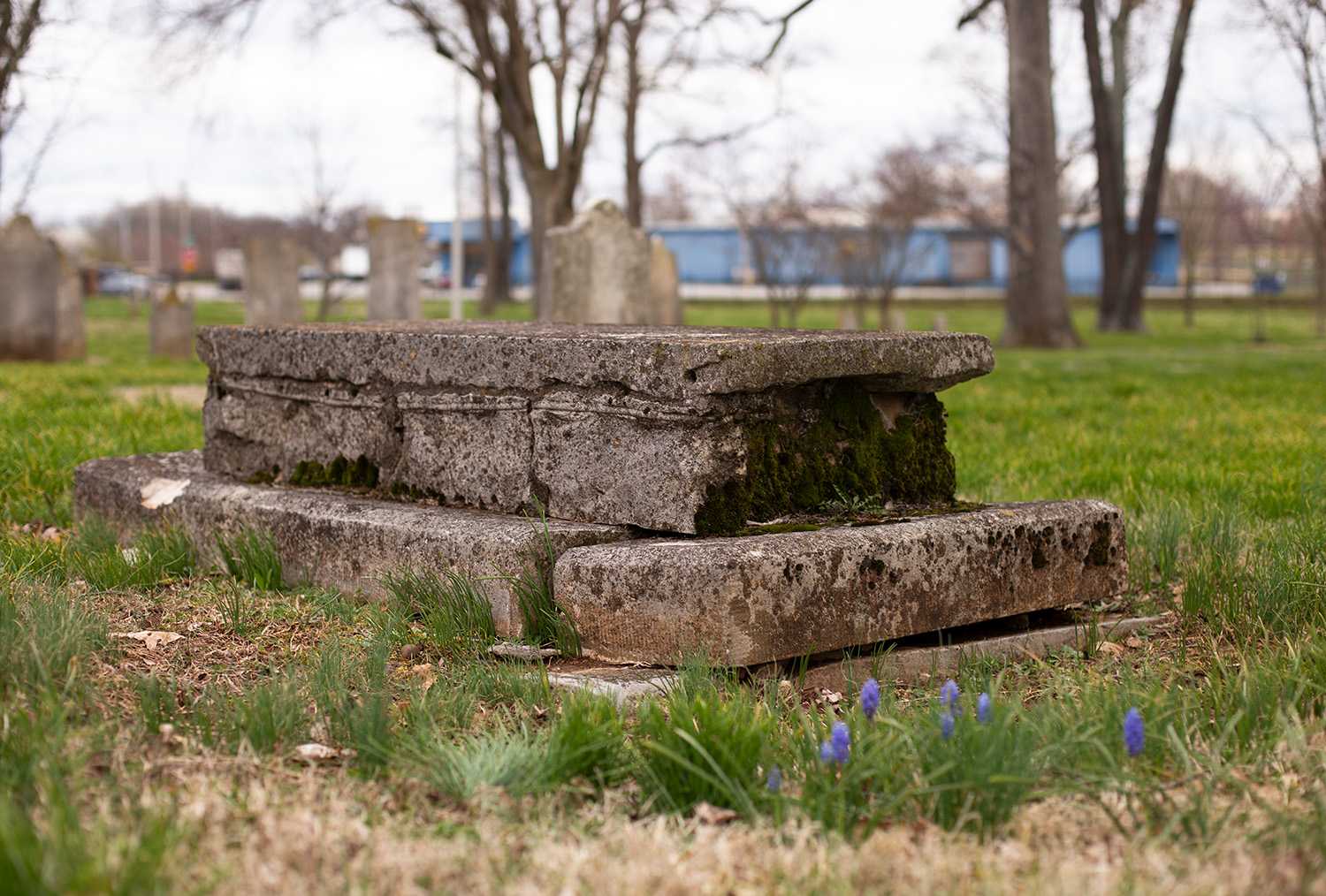 The amount of people buried in Pioneer Cemetery remains unknown. The records kept in the 1800s were poor and many of the graves were left unmarked.

Reverend Joseph B. Lapsley established the church in 1819, according to Moody.

Lapsley died in 1823, and without him, the Presbyterian church had no staying minister. Lapsley was buried on his own land initially but was reburied at the cemetery.

“He lived in a place called Lapsley Hall at the time, out in the country, and he was buried there,” Moody said. “For some reason in 1863, during the midst of the Civil War, he was re-interred in Pioneer Cemetery in the spot where the pulpit sat of the church.”

Moody said the church building Lapsley spoke in was gone by the time of his burial. The current Presbyterian Church building started in 1833.  Without Lapsley, record keeping by the church was disorganized. There is no current proof as to what happened to the old church building.

Several long-time church members I spoke to said they believed the church burned down. It strikes me as a moderately reasonable assumption, as only so many things can destroy a building in Kentucky.

Records from the Presbyterian church suggest some wooden beams from the old church may have been used in constructing the current building for the First Presbyterian Church, which sits at the corner of 10th and State streets.

Looking more into the early cemetery fills me with questions, but the two main mysteries of Pioneer Cemetery are clear. What exactly happened to the old church? And who was buried here?

Many graves are not marked. Pioneer Cemetery would bury black people, but most were slaves and would likely not be given a headstone. War dead would be interred without markers in groups at times, according to the Sexton’s book, which is currently being digitally transcribed. The Sexton’s book, kept by the person who oversees the churchyard, is a list of all those dead and buried there. Additionally, throughout its history, the cemetery has also been subject to vandalism and the removal of stones.

Several graves have more recent markers by the old stones, likely put in place by family members later on. The Burnam family, which is located on the right past the entrance, has newer markers in place, which more legibly show the names of the dead soldiers. The Civil War, in fact, filled the cemetery.

It reached capacity sometime around 1866 and stopped accepting bodies. Some previously buried there were even disinterred and reburied in the new Fairview Cemetery. Fairview opened in 1866, Holl said. Pioneer Cemetery, Fairview Cemetery and Mount Moriah, the historic African-American Cemetery, are all owned and maintained now by the city of Bowling Green.

A few months ago The First Presbyterian Church sent in requests for a historical marker to be placed at the cemetery, but they have yet to hear back from the Kentucky Historical Society. More information about the church’s early history can be found in the recently-published book by Robert V. Haynes, “In the Beginning: An Early History of the Presbyterian Church of Bowling Green, Kentucky, 1819 to 1837, A Bicentennial Study.”

Editor’s note: This headline of this story has been changed to be more precise, because a claim made in the previous headline could not be verified.