Ah, the small-stage tuba-and-euphonium concert. A hallmark of musical masculinity.

The conductor, an older, thick-necked gentleman sporting baggy black pants and a well-maintained gray mustache, tells the crowd not to clap as the performers enter. There was no space backstage to warm-up, so this is an informal beginning to what will be a modest show — not, in the conductor’s opinion, a reason to applaud.

Still, the 40-or-so people in the audience thunder on as 12 young men dressed in black step into the room and fine-tune their instruments. They take their seats and set water bottles down at their feet. A tattered lanyard hangs from one tubaist’s pant pocket.

American tuba and euphonium ensembles became popular during the 1960s and ‘70s. They emancipated the tuba, an ugly hunk of intestinal brass, from a drab existence playing nothing but basslines and counter melodies. The ensembles placed tubas — and their younger brothers euphoniums — on center stage for the first time. Oh, and side stage. The back row? Also tubas.

Our subject of interest is an ensemble featuring eight tubaists and four euphoniumists. Their show, WKU’s “Octubafest,” completes a music class requirement for the performers. Though they are not yet professionals, these young men are well on their way to potential careers as brass performers.

They open the show with a deep, suffocating, droning harmony. Every song reddens faces. Every section ends in a group gasp for air. Between tunes, the men on stage pull off sections of pipe from their instruments to dump condensated saliva on the stage.

Before every song is a short monologue by the conductor, Professor Joseph Stites. These monologues are the focus of this Tuba Talk. Tubas, if you can’t already tell, are astoundingly interesting. But just as a tuba is a massive pipeway of spit and sound extending out from the mouth, this Tuba Talk is just a roadway for Mr. Stites’ little pieces of musical history.

Stites, the large man who is currently bobbing his smiling head to his students’ brassy music, typed his speeches in his office in a forgettable hallway that wraps behind an underused elevator in FAC. When this song ends, he’ll turn around and read another of the pages he typed at his desk, his desk that sits beside a wooden case holding — you guessed it — tubas.

I think Mr. Stites deserves a little recognition. In fact, I think Mr. Stites’ inclusion to this Tuba Talk is critical to the talk as a whole. There are a whole lot of people being excluded, you know. And just imagine how happy he would be to know his words were the subject of a whole Tuba Talk!

But, anyway, back to our scene. The band of men is getting ready to start their third song: “Come Sweet Death” by some German guy. Stites just read his bit explaining that they play the song at every Octubafest to “commemorate the passing of a man who was kind of the patron saint of tuba players.”

Women represent just 10 to 15 percent of the upper echelons of orchestra music, according to experts at the University of Iowa. Brass sections in particular are lacking in female numbers, and those positions tend to be the highest paid parts of an orchestra. The world’s leading tuba organization—the International Tuba Euphonium Association—used to be called the Tubist Universal Brotherhood Association from 1973 until 2000. I’ll admit, T-U-B-A makes for a better abbreviation, but I can’t help thinking that the few women in the organization didn’t feel much of the brotherhood.

This band of men on stage, which just began an energetic rendition of Reinhold Gliere’s “Russian Sailors’ Dance,” is certainly representative of orchestral music’s depressing lack of gender diversity.

Backpedaling for a moment, I want to stop and emphasize to you that while this Tuba Talk is certainly supportive of the feminist cause, it is not this Tuba Talk’s only goal. I should also reinforce that I am a man, and I cannot play the tuba or the euphonium or any instrument really. My new, mustachioed friend Mr. Stites—who, for the forgetful out there, is the writer of the words that this Tuba Talk is all about—is not at fault here. Even if he was, it isn’t my right, as a musically untalented man, to throw this kind of blame his way.

I spoke with Mr. Stites about all this, and he told me that he wanted more women in his classes. He told me that the reason for the depressing numbers is that girls aren’t playing the tuba at local high schools, and therefore he wasn’t getting any women funnelled into his college program.

To confirm, I called a couple local high schools to speak to their band teachers. One transferred me, but then no one picked up the line. One school never picked up the phone at all. I figure it’s probably a conspiracy to suppress an impassioned voice of the oncoming female tuba-playing renaissance. Kentucky must fear a female planet made of brass.

I also asked a well-connected friend if he knew any female tuba players. He laughed and said “No, but that would be funny looking.” Then he realized that he actually did know one such woman. I tried calling her a few times, but I kept getting a machine that played classical music before telling me that its owner hadn’t set up the voicemail box yet.

Eventually, I tracked down the one and only female tubaist in WKU’s marching band. Lauren Armstead is a sophomore from Clarksville, Tennessee, who started playing tuba in high school. She was one of two tubaists—both female. Maybe Tennessee fears the female planet made of brass less than Kentucky.

“Tuba is mostly male-orientated, just like everything else in the world,” Armstead said. “When I’m in the section I’m one of the dudes.”

Getting back to our focus, Mr. Stites is about to read his next monologue, and I’d like you to read a little as well.

“The title reads ‘march’ and the composer calls it a ‘two-step’ dance, but we think that after hearing the piece you will agree with us that it has many of the rhythmic and stylistic characteristics of a ragtime piece,” Stites said. “Call it a ragtime, a 2-step dance or a march, Karl L. King’s “Kentucky Sunrise March” should set your toes a tappin’.”

He read those words with a grin. The performers behind him cracked jokes to each other as he spoke. When he reached that last bit his voice expanded to a shout, and the performers began tapping their feet in unison.

When I spoke with Mr. Stites, I asked him how much a tuba weighs. He immediately let me hold one. I would put it somewhere around 20 pounds, and he said it didn’t get much heavier. Disregarding the marching band variety (which Lauren confirmed is easy to carry), tubas are played while sitting with the instrument on one’s lap.

I’m telling you this to clarify that I do not think that there is a physical reason why most women do not play the tuba. Sure, the cumbersome size is a probably a detractor for many, and maybe I’m just dumb, but I don’t buy it. Some of the best tuba players of all time were women. Performers like Carol Jantsch, Velvet Brown, and Patti LuPone exist, dammit. What part of our zeitgeist is responsible for this? Why has our collective conscience denied women access to one of the lowest-sounding and highest-paid of all instruments?

When I left Mr. Stites’ office, he stopped me to tell me that there were good people everywhere in the world and that he had learned that one must appreciate them as they’re encountered. Or something like that.

Back at Octubafest, the next song that Mr. Stites will introduce is called “The Cascades Rag.” The last line of his printed-out speech is “Yep. It’s a DANCE.” Dance is in all caps, and he will read it that way.

I am embarrassed for what I am about to say, because I dislike the way that I know I must phrase it. Another Kentuckian once wrote that ‘love’ is one of those words that should be avoided in writing, and I agree. But if there is only one takeaway from this Tuba Talk, and if there is one thing that I learned while preparing for this Tuba Talk, it is that Mr. Stites absolutely loves tubas. 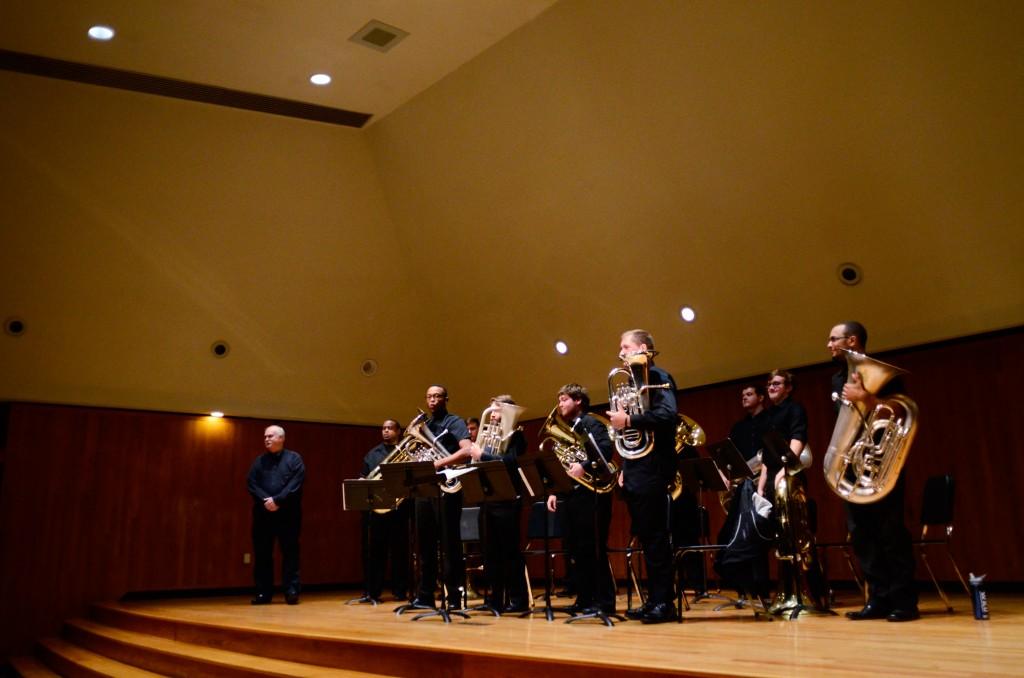