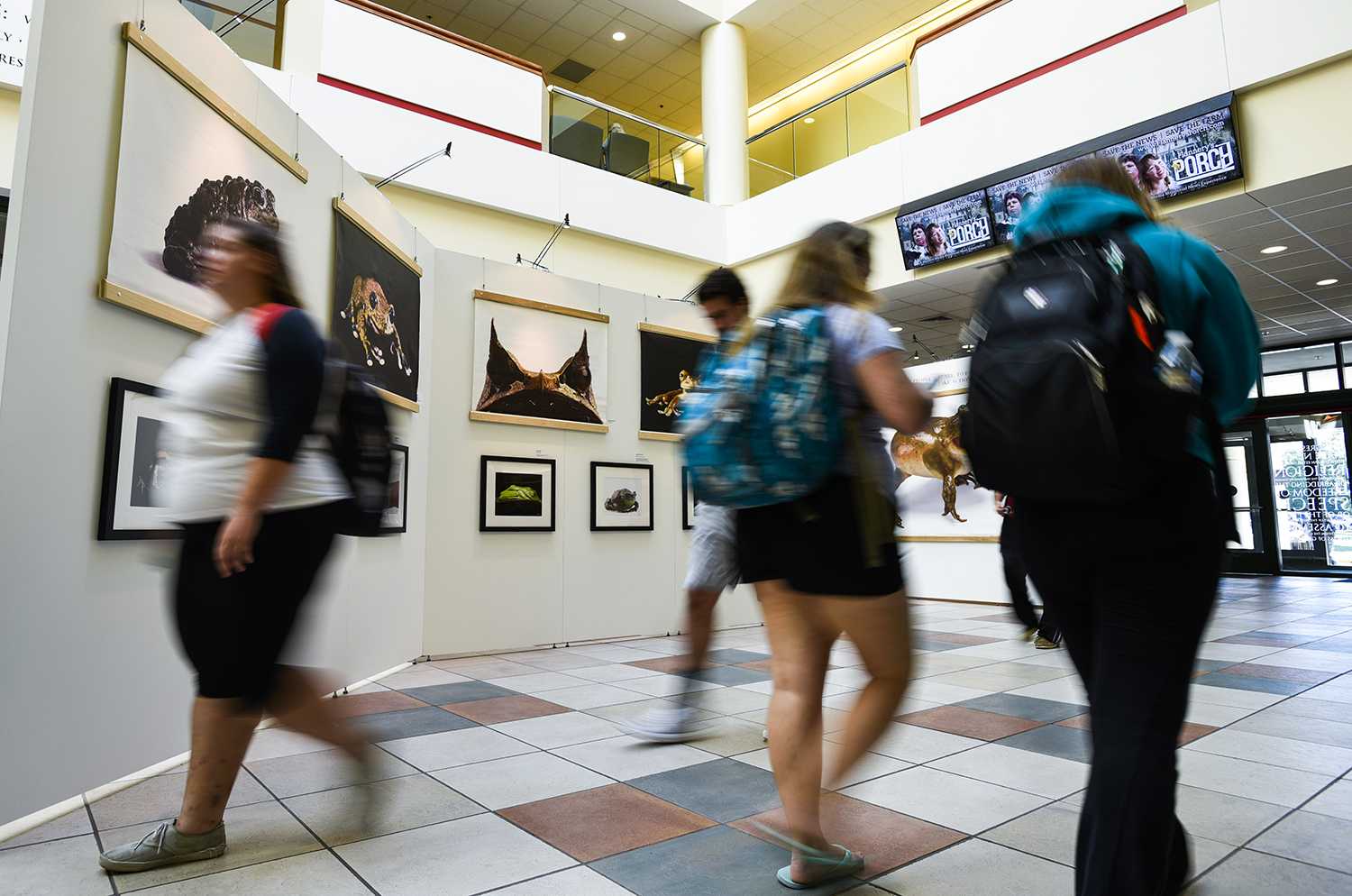 Many millions of years ago, when the earth was much more blue and the forests were made of ferns, an innovative sea creature took the first steps from life in the ocean to life on land. This species, Tiktaalik, literally stepped from the water to the soil and became the first ancestor of modern amphibians.

Since then, amphibians, derived from the Greek word amphibios, meaning “two lives,” have lived between the barrier of life on land and life in water. These amazing creatures continue to demonstrate a monumental step in evolution and are a connection between all land animals and their fishy ancestors.

Every field has its innovators. Just like amphibians, Joel Sartore represents a collision of ingenuity and adaptation by walking the line between two vastly different worlds. In Sartore’s case, these are the worlds of art and science.

Sartore is the mind behind the Photo Ark ­­­­­— a National Geographic-sponsored project to document all 12,000 animal species in captivity before they go extinct. It’s an effort to connect people with nature and to express the importance of environmental conservation.

In the last decade, Sartore has traveled to 40 countries and photographed over 6,000 animal species.

While it may be hard for a college student on a Kentucky campus to see the effects of species extinction, professionals in the field, like Sartore, often experience the loss of biodiversity firsthand.

“The most frustrating thing is that animals are going extinct before I can get to them,” Sartore said. “It’s just maddening in a way because the world is such a big place and there is so much habitat destruction going on.”

As the entire world is undergoing the beginnings of a mass extinction, amphibians — as expressed in the title of Sartore’s gallery — have been vanishing at alarming rates and undergoing their own amphibian crisis.

Amphibians are vertebrates that live at least a portion of their lives both in water and on land and include frogs, toads, newts, salamanders and caecilians. Typically, amphibians begin their lives in water and then undergo a metamorphosis to live on land. Because of this, amphibian populations are extremely vulnerable to climate change, pollution, environmental destruction and disease.

“Amphibians are being knocked around very hard by climate change and pollution and habitat loss,” Sartore said. “I try to race around and get them before they’re gone.”

Sartore said he first began documenting animals at his local zoo and realized that the photos were unique. The animals in Photo Ark speak for themselves through hauntingly characteristic and personified portraits.

“It never surprised me at all that when we look into the eyes of animals that they are engaging and captivating,” Sartore said.

“All three of these guys basically devoted their adult lives to doing a single thing very well,” Sartore said. “And so I thought, you know, I could do that with these animal portraits and make a body of work that lasts and hopefully gets people to care about the extinction crisis, and be moved to do something about it while there’s still time.”

While Sartore is inspired by the work of Audubon, Catlin, and Curtis, his goal is not simply to catalog his subjects.

“My hope is that Photo Ark won’t be a huge obituary of all the things we squandered, but instead it will become a motivational force to get the public to realize that we share the planet with a huge variety of species,” Sartore said.

While the message extinction brings is not necessarily positive, the way people respond to environmental crises can bring about a solution. But people must respond.

“I can’t force [people] to get off the couch and quit staring at Kim Kardashian,” Sartore said.

But he hopes his work will inspire people to do just that. People have the ability to respond to environmental issues in more ways than just speaking out. The purpose of Photo Ark is to inspire people to see the need for change and take action on a personal level, possibly through practical lifestyle changes.

By choosing to invest in more efficient products or services, an individual can shrink his or her carbon footprint. For example, investing in higher quality home insulation or even planting slow-growing grass to avoid mowing can make huge differences in carbon emissions if done across a population. Even actions as small as unplugging phone chargers can make a difference in global energy consumption.

Environmental conservation and reducing carbon emissions may seem like a no-brainer for people to prioritize, but there still continues to be a disconnect between people and our dying environment. Sartore’s Photo Ark serves to fill this gap between people and animals by sending a clear message that our earth’s animals and plants can’t save themselves.

“As these animals go away, so do we,” Sartore said.

Sartore is committed to increasing the opportunities people have to look threatened animals in the eyes.

“It is a big job that I’ll never get done, and it’s heartbreaking when you go to the trouble I’ve gone to and find out you got there just a little too late,” Sartore said.

People may glamorize the idea of traveling the world and working with exotic animals, but the reality is that Sartore has sacrificed a large portion of his life to try and foster a connection between humans and their earthly neighbors.

Yet, he has plans to continue for another ten or fifteen years providing he lives that long, Sartore said.

“I don’t want to let any of these animals pass into extinction without the world at least hearing their voice once, and I am that voice for a lot of species,” Sartore said. “I’m proud to be doing [the] work. It’s a great honor and a great responsibility.”

To learn more about Joel Sartore and his Photo Ark, attend his lecture in Van Meter Auditorium on Monday, Nov. 7 at 7:30 p.m.