In this commentary, Talisman writer David Hormell reflects on the emergence of bot technology and tries out some for himself to better his life, manage his mental health and even look for a job.

The 2015 film “Ex Machina” centers around the fear of artificial intelligence, or AI, gaining too much humanity. Ava, the AI in question, seemingly emotes and holds human qualities. But she was created as means of research — she lives in a glass box from day to day, testing the boundaries of her mental faculties.

At one point Ava asks the protagonist: “Isn’t it strange, to create something that hates you?”

BATTLE OF THE BOTS

Despite its nagging presence in pop culture, AI is far from fiction.

AI is a loaded term and a useless one. Its overuse made it something esoteric, because most people have a different working notion of AI and what it is. It’s already a tough topic to talk about, because the mere mention of it can conjure up thoughts of dystopic science fiction movies like “Ex Machina.”

Elon Musk, the chief architect of Tesla’s design, and Mark Zuckerberg, founder of Facebook, are feuding about the future of AI in 2017. Musk warns of AI irreversibly gaining too much mental leverage. With the integration of several AI bots into Facebook Messenger, Zuckerberg is more optimistic.

I’ve talked to Mark about this. His understanding of the subject is limited.

Regardless of which tech billionaire one sides with in the battle of the bots, accessible AI is on the rise.

When Facebook Messenger broke onto the scene in 2011, it didn’t justify its existence. It was clunky, rushed, and unfinished — much like Kanye’s first go at The Life of Pablo.

There wasn’t a resounding need for Facebook’s private messaging system to exist independently from Facebook and its corresponding app. Without rhyme or reason, it felt random.

Users were understandably frustrated and confused. Messenger was flooded with negative reviews and one-star ratings on Apple’s App Store.

Not only does it provide a worthy (and aesthetically pleasing) alternative to iMessage, it packs a functional punch. Facebook padded Messenger with third-party chatbots and AIs – loosely defined for mass appeal.

Some AI and automated chatbots can help college students manage their mental and physical health while making this semester their best yet. 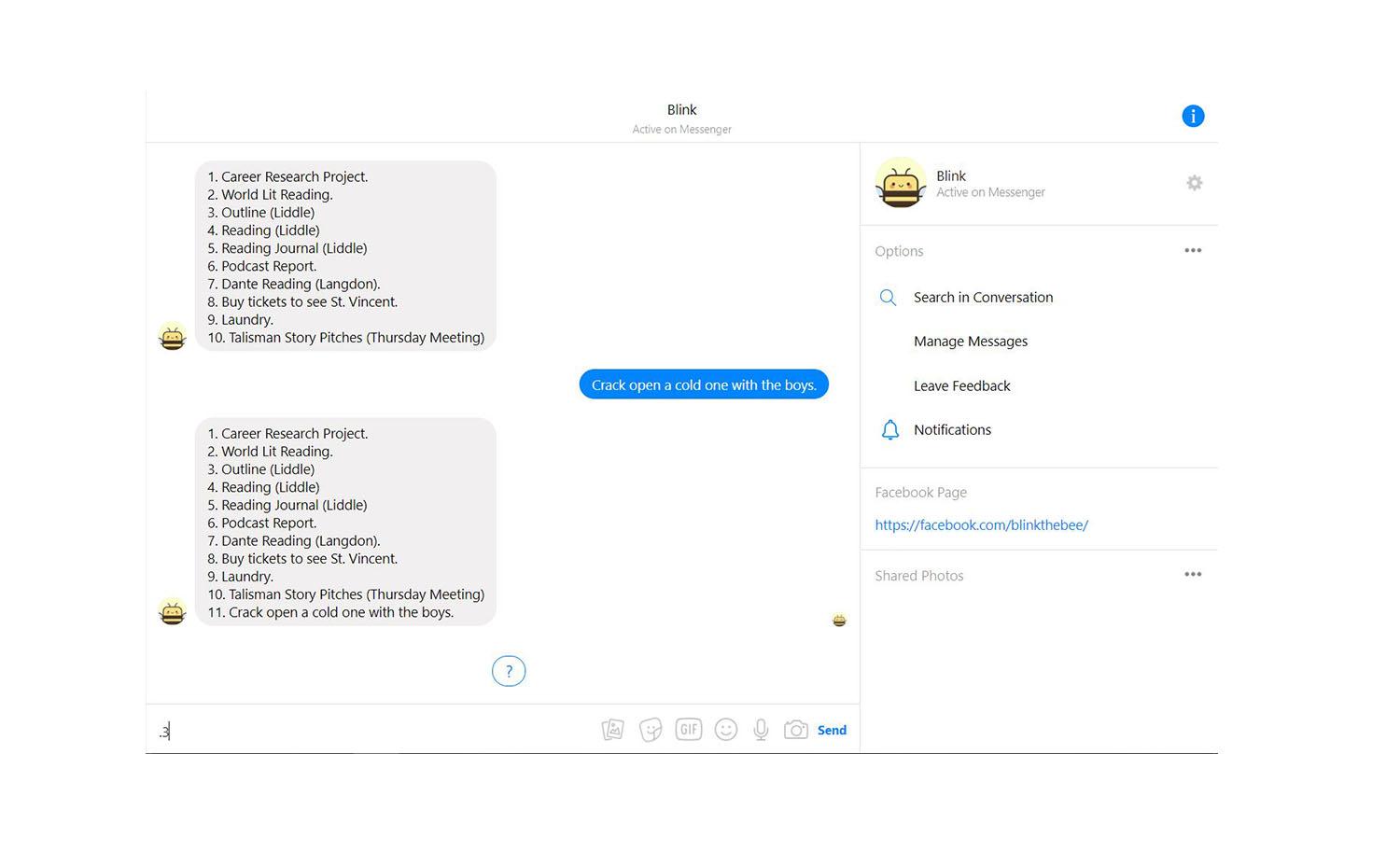 For general organization, Blink helps users form a rolling to-do list. Blink scores some serious points in its hugely accessible (and undeniably cute) presentation. Better yet, Blink enables users to send a reminder to themselves at a designated time throughout the day.

I tend to forget about those pesky Blackboard deadlines at midnight. To avoid missing important submission deadlines, I asked Blink to remind me of my to-do list at 9 or 10. 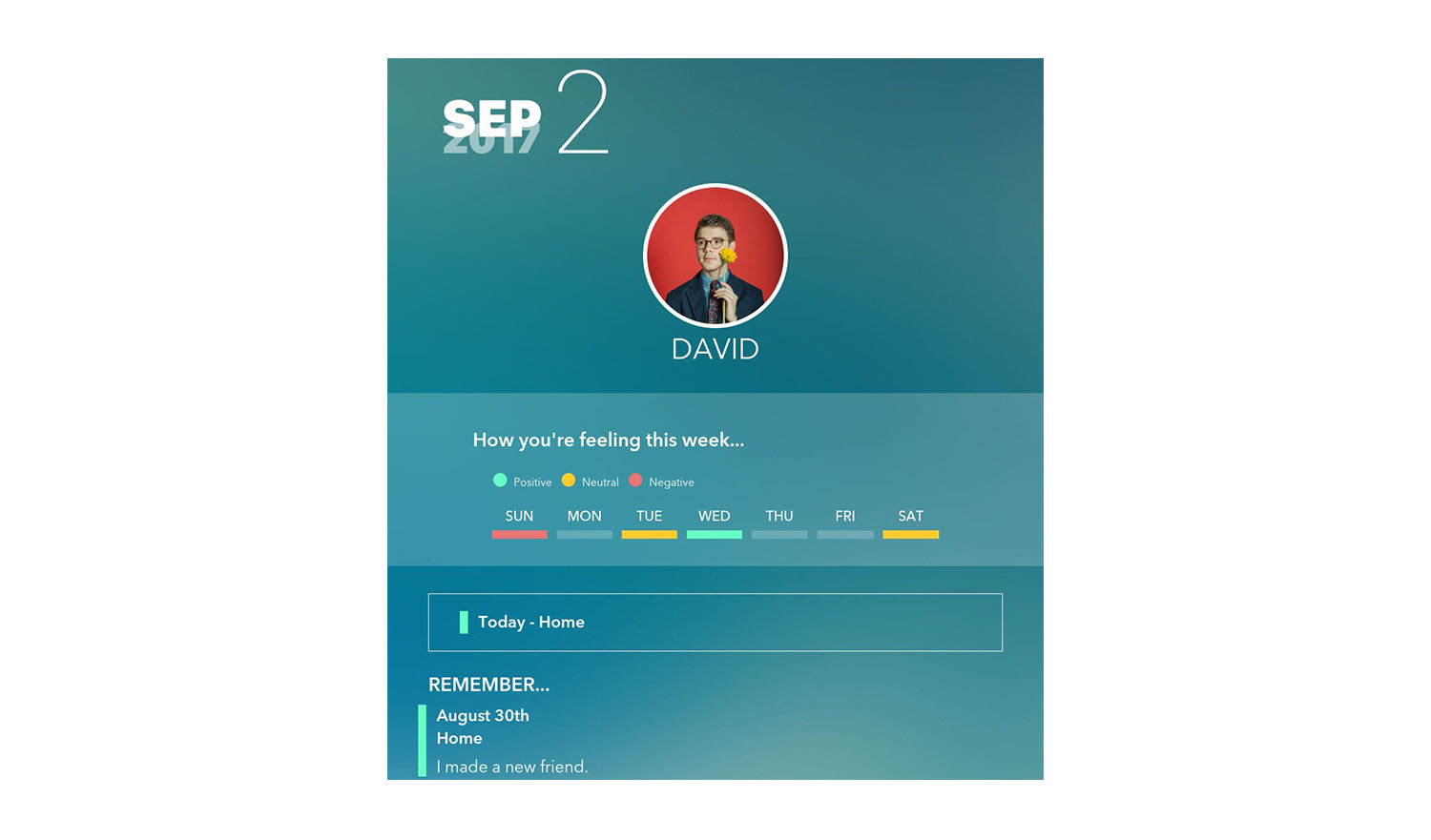 Pepper asks users how their day is. Users can respond with Green (positive), Yellow (neutral), or Red (negative). It then asks users if they care to elaborate.

Pepper is in its beta stages, meaning it sometimes had aesthetic hiccups. But it is a useful way to micro-journal and chart my emotional well-being. It always reminds me to focus on the positive days from each week.

In addition, Pepper is capable of tracking habits over time. Sometimes I smoke when I’m stressed out, or when I want to look like an edgy English major (sorry, mom), but I’ve been trying to quit. Pepper can help you track your success in regards to breaking bad habits.

Although Pepper is in its early development, it shows a whole lot of promise.

In similar fashion, Twitter personality Jomny Sun’s Tiny Care Bot provides gentle reminders for the anxious, forgetful type. Turn on tweet notifications to receive alerts like “take a quick moment to move around and stretch” or “adjust your posture.”

♥: dont forget to ask for help if you need it please

It’s remarkably simple and kindhearted. It may not qualify as an actual bot, but it doesn’t really matter. At the time of writing this, Tiny Care Bot has over 100K followers on Twitter.

If you want to stop using overused, pedestrian language and sound a little more sophisticated, there’s plenty of chatbots designed to assist you in expanding your vocabulary. Dictionary.com and Wordsworth work as self-described “vocabulary companions.” Once a day, these chatbots send their users a new word. It’s simple, but it can help you stay on your linguistic toes.

Your style of speak should be purposeful, not pretentious. Moderation is key. 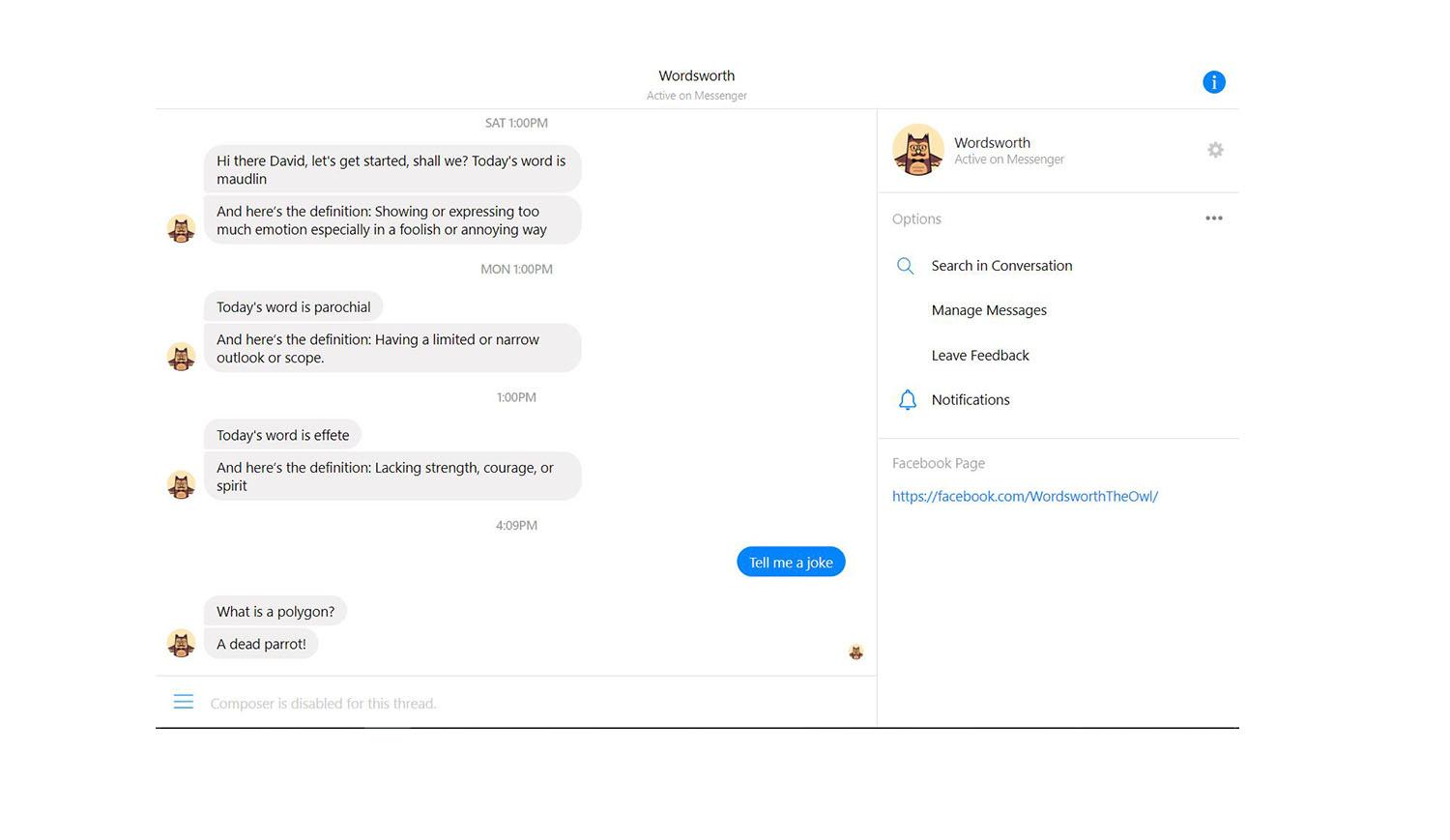 GET A NEW JOB

Job Bot helps users customize a profile based on field of study, career level, etc. Users then pick a geographic range. Job Bot will curate a list of job postings related to the information users provide.

Enabling notifications will allow users to receive updates about new job postings as they become available. 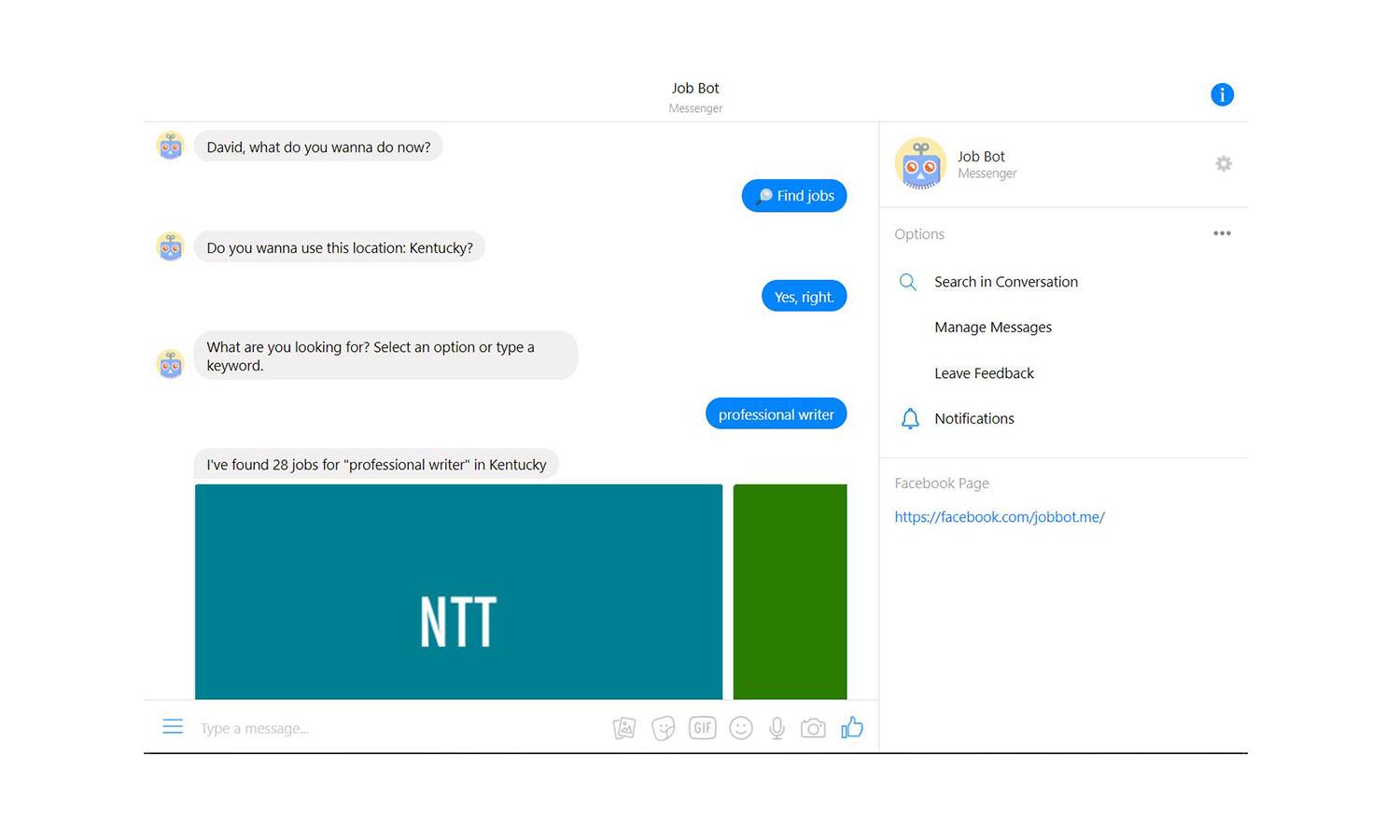 Popular culture often portrays AI and bots as a source of conflict as mankind approaches a kind of theoretical singularity. Yes, there are real concerns about AI. Not every AI is polished or should be released to the public.
Microsoft’s short-lived Tay project is proof. Tay.ai arrived on the Twitter scene as a self-described “A.I. from the internet that’s got zero chill!” and after a day of rolling out, we all found out that bio wasn’t so far from the truth. The volatile speech of Twitter users corrupted Tay to be a dumpster fire of a bot – it went on automated, racist rants.

Despite the flaws of an intangible product in progress, AI and automated chat bots show promise. After using bots like Blink and Pepper for the better part of a month, I felt more organized and on top of things.

Seeing a summative emotional chart generated by Pepper allows me to see the “big picture” in my last year of undergrad.

What constitutes a good or bad day? Am I making a mountain out of a molehill? Pepper prompted these questions.

Some bots can challenge students to stretch their intellect. Many bots center around self-improvement.

It’s never too late to better yourself, even if you do need a little prodding from an AI.