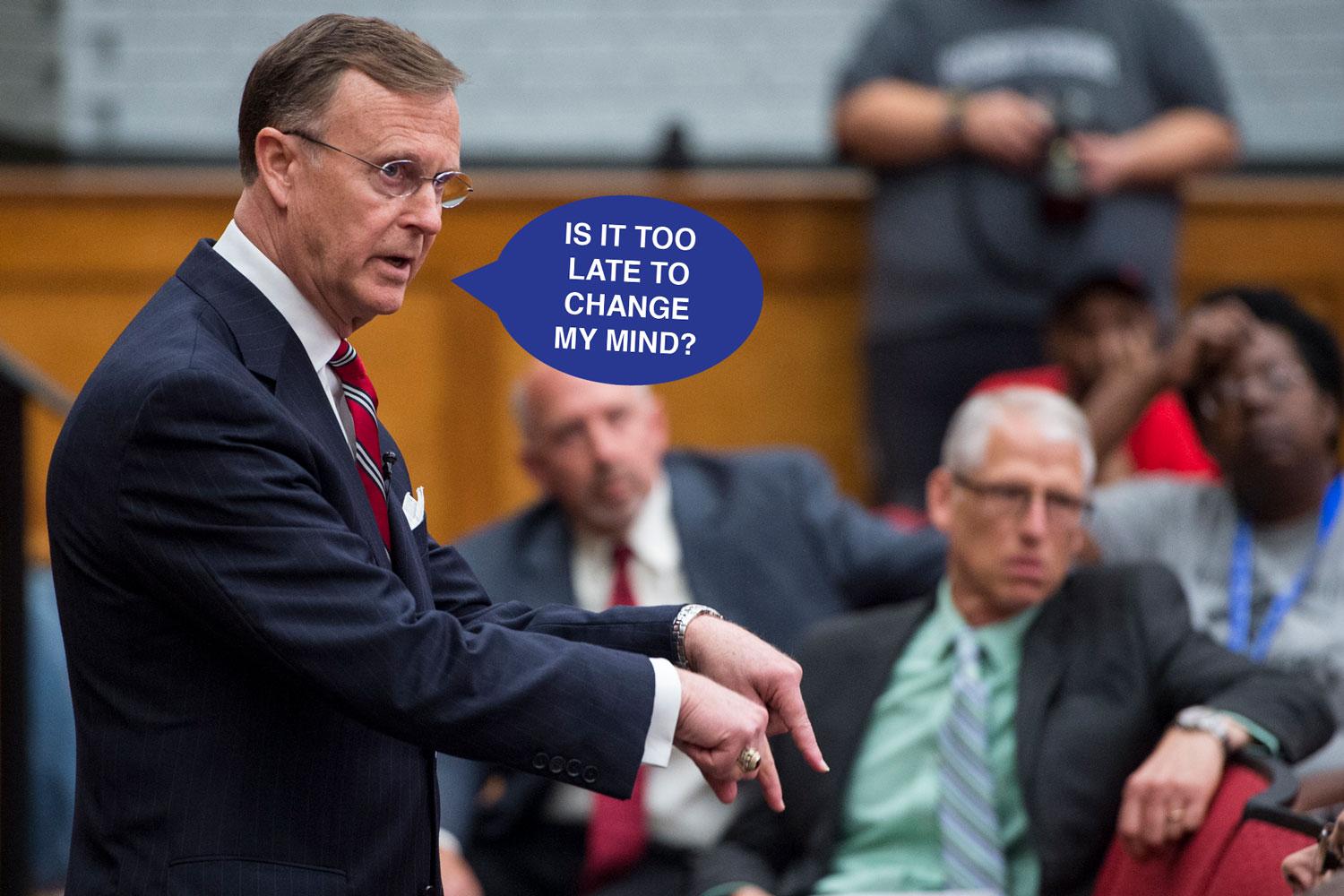 In a shocking turn of events, President Gary Ransdell has announced his refusal to leave WKU. In a press conference early this morning, President Ransdell called several of the deans and local reporters to his front lawn. According to our correspondents, the house was completely quiet upon arrival until Big Red suddenly burst forth from the front door.

Big Red emerged from the Ransdells’ home, stepping out onto the porch before removing the head of its mascot costume to reveal President Ransdell hiding inside. Upon setting down the mascot head, Ransdell acknowledged the crowd and thanked everyone for coming.

“I want to thank you all for coming out so early this morning,” Ransdell said. “I know it’s Saturday, and you probably all have things you’d rather be doing, but I just needed to make a few announcements.”

It was from here that Ransdell began to list his future plans.

“First of all, I’ve changed my mind,” Ransdell said. “I no longer wish to retire. I revoke my resignation, and I will be continuing on as president of WKU. Secondly, I want to announce my frustration at you all for being so thrilled about this new guy. I mean, come on — I’ve been here for 20 years, and you all don’t even have the kindness to wait until I’m gone to show your excitement?”

Ransdell continued for several minutes, issuing his complaints with the whole of the university for, as he put it, “loving him and leaving him like [he] was yesterday’s Burrito Bowl.”

Finally, Ransdell concluded his speech with a challenge to WKU President-elect Timothy Caboni.

“And lastly, I want to send a message to this new piece of action who thought he could just waltz in and take my job,” Ransdell said. “I will not be overthrown. I am ruler of this university and I will remain so. And if anyone, including you, Dr. Phony, has a problem with that, you can meet me here and we’ll settle this like real men: with an old-school duel.”

Ransdell then exclaimed “Mic drop!” and proceeded to run laps around his yard shouting the WKU fight song.

After an hour or so of this scene, the crowd dissipated, but according to Twitter reports and students nearby, Ransdell has continued his laps, stopping only for brief snack breaks consisting of Powerade and pre-packaged Aramark salads from POD.

President-elect Caboni has not yet responded, but the Talisman will continue to update this developing story as more information becomes available.