Hilligan’s Sports Bar is a popular sports bar among WKU students. When I found out they had a trivia night, I had to put Hilly’s to the trivia test. Their trivia night is the third spot on our quest to find the best trivia in Bowling Green.

Every Tuesday at 7 p.m., Hilligan’s hosts what they call Pub Poll. I dragged my friend Heather along with me, because going to trivia alone is never fun.

We arrived around 6:50 p.m. and the place was somewhat packed with my estimate of over 50 people. My expectations had dropped a little since the 643 Sports Bar experience, so I didn’t expect such a big crowd. Heather and I did not have trouble finding a table, though.

The music was loud and so was the crowd, but I expected as much in Hilly’s. The excitement exuding from other tables made me excited to start the game.

Once we were seated, the announcer brought us our scorecard and answer sheet, which was a nice plus considering I have never gone to Hilly’s trivia before and didn’t know how to play. The rules were explained once the game started, though. Our waitress took our drink order, and the game started shortly after. I got a tequila sunrise and Heather got a blue hurricane.

We decided to name our team the Tequila Mockingbirds. It’s a slightly overused team name, I know, but the announcer liked it, and that’s OK with me.

This trivia is very different from Mellow Mushroom and 643’s. Pub Poll doesn’t test your pop culture knowledge. It’s more or less like a game of Family Feud. There are six rounds with three questions per round. There is also halftime questions and a final question to boost your point total.

The “questions” are polling questions that ask you to give the top three answers of a certain circumstance.

For example, the first poll asked people if they couldn’t have cake on their birthday, what dessert they would have. Our answers were ice cream, pie and cookies.

Some of the polls were difficult, but others were fairly easy. If you’ve seen “Family Feud,” then it’s pretty easy to get the hang of Pub Poll.

The announcer was pretty funny with his dad jokes and puns. His music taste was just as good (in my opinion). However, the time between questions often lasted the entire length of a song. This seemed a little long to me, but after two drinks, I didn’t mind it.

When it was time for the halftime questions, Heather and I weren’t close to winning. We were in a balmy ninth place with 15 teams playing. With the carefree environment, though, we didn’t feel pressure to catch up.

Pub Poll winners received Hilly bucks, money you can use only at Hilligans, for their prize. Third place received $10, second received $20 and first received $30.

Heather and I ended the night in seventh place, but we still had lots of fun. Pub Poll lasted just under two hours, so definitely clear your schedule if you want to go to trivia at Hilly’s. 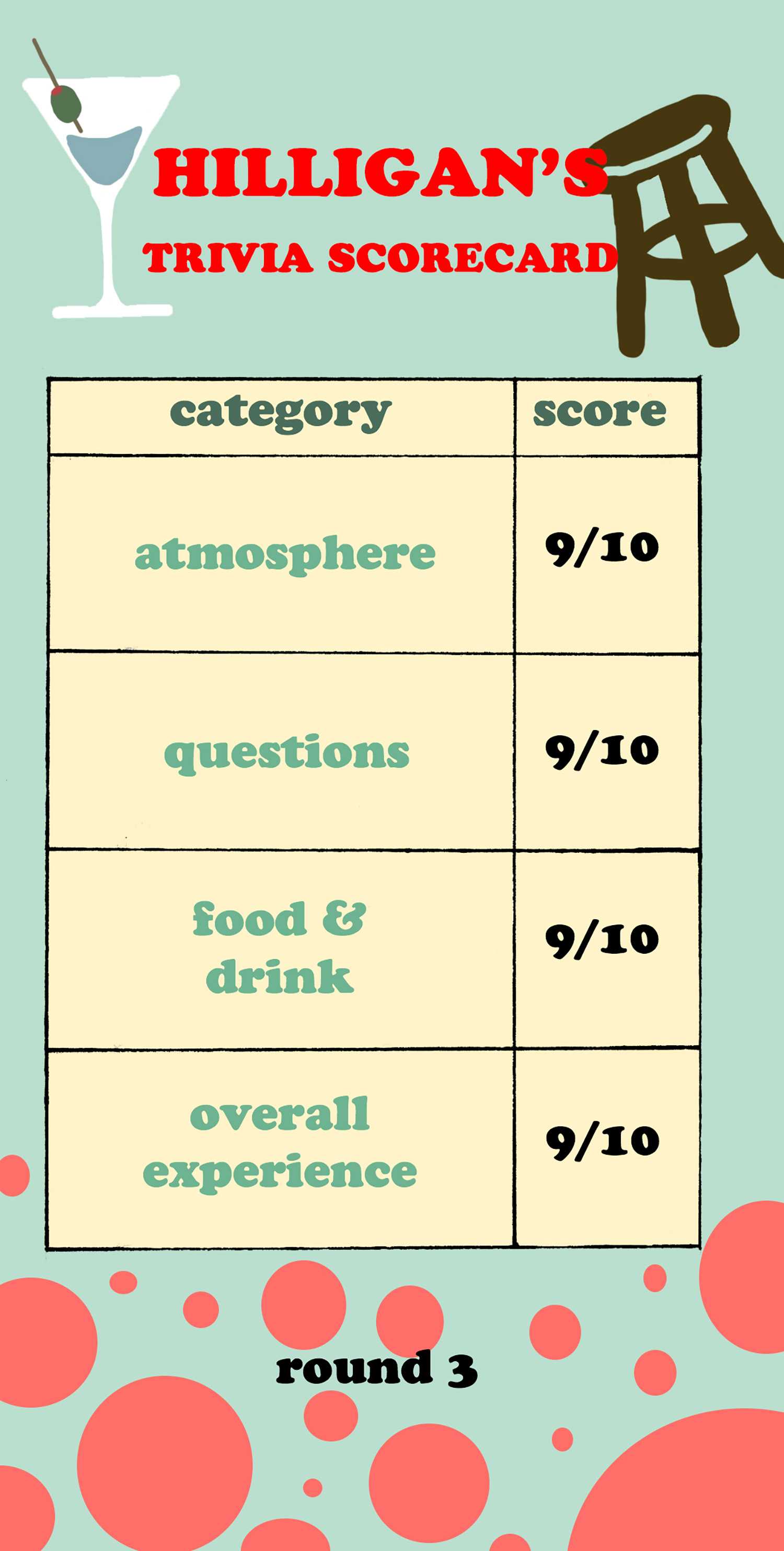 Based on the overall ambience and amount of fun we had, I give Hilly’s “trivia” 9 out of 10 points. Its only fault was that it lasted a super long time.