Welcome to March! The smell of a new season is in the air, and those boys who exclusively wear basketball shorts no matter the temperature will soon be justified again.

This month marks the halfway point of the semester, and it also features a wide range of events from sports to theater and from hip-hop to the cosmos. After spring break, students can return to their home away from home for a plethora of opportunities to seize the day in Bowling Green. 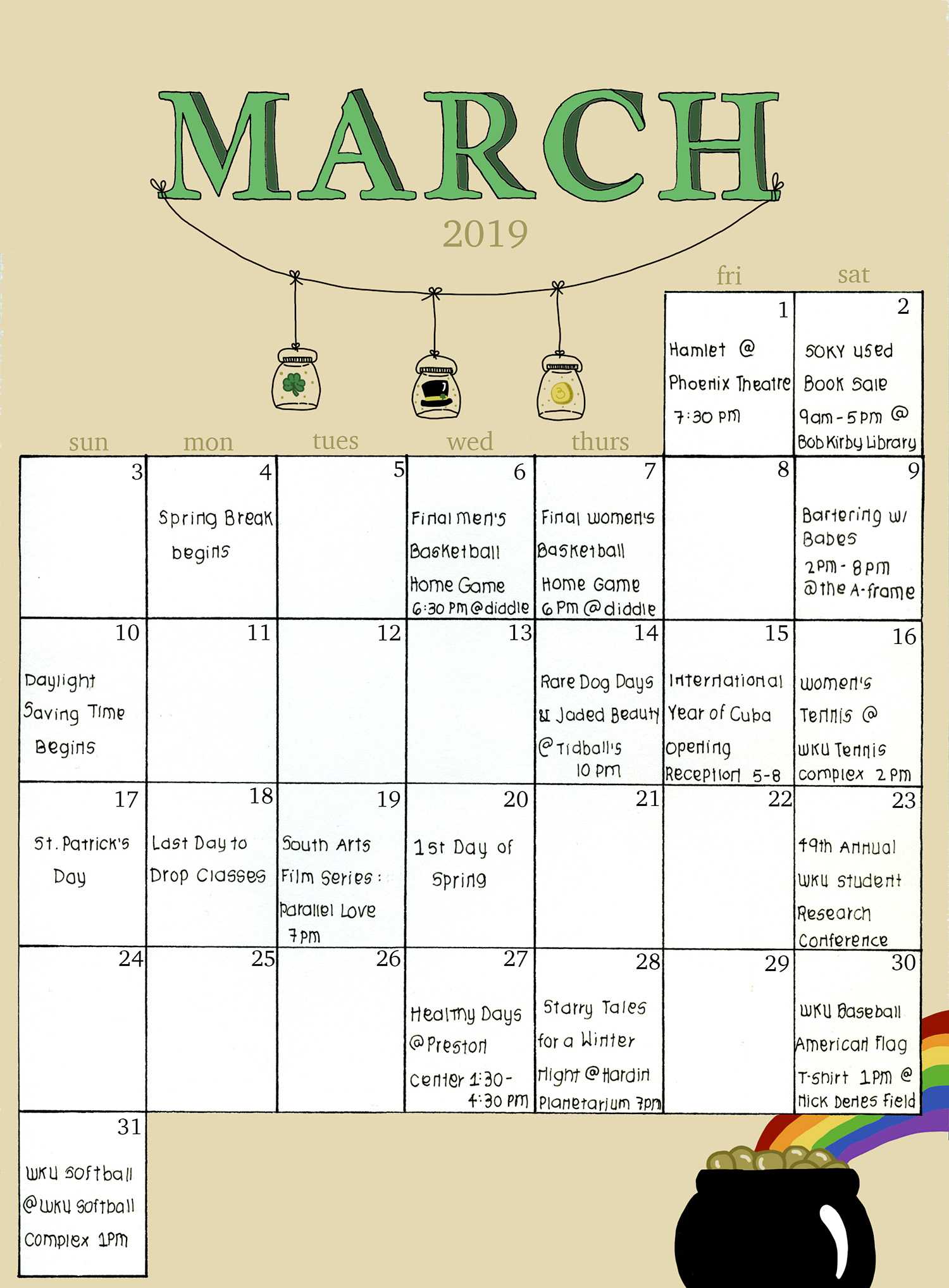 The Southern Kentucky Book Fest is selling used books, DVDs, CDs and vinyl records for $1 or less at the Bob Kirby branch of the Warren County Public Library. The sale is lasts from 9 a.m. to 5 p.m. on Friday and Saturday and from 1 p.m. to 5 p.m. on Sunday.

For those staying in Bowling Green over break, the Hilltoppers will host University of Texas at San Antonio in their final game of the regular season before playing in the Conference-USA Tournament in Frisco, Texas on March 13. Tip-off is at 6:30 p.m. in Diddle Arena.

Following the men’s season finale, the Lady Hilltoppers will host their final regular-season game in Diddle Arena at 6 p.m. when they take on Middle Tennessee State University.

Women creators will be celebrated on this night at the A-Frame. The previous event featured live music, food, workshops and art, and this year promises more of the same. Vendors will be selling their creations from 2 p.m. to 8 p.m.

At 2 a.m., the clocks jump forward to 3 a.m.! Try not to accidentally stay up too late. Residence halls that did not stay open during break will reopen at noon.

Nashville-based band Year of October and Owensboro-based bands Rare Dog Days and Jaded Beauty are sending sound waves through Tidball’s starting at 10 p.m. Cover for the show is $5, and the event is open to all those aged 21 and over.

This new exhibit in the Kentucky Museum will showcase more than 25 pieces representing Cuba’s diverse contemporary art culture. The reception will last from 5 p.m. to 8 p.m.he exhibit officially opens March 9 and runs through May 28.

Struggling in a class you know you won’t pass? This is your last chance to drop it without hurting your GPA. Also, need to catch up on hours, or want to get ahead and take fewer hours next semester? Priority registration for summer classes opens up today.

This free movie screening at the Capitol Arts Center follows the story of a band from south Georgia rebranding themselves following a major setback after nearly breaking out. The film starts at 7 p.m., and the filmmaker will be taking questions after the screening.

Students from all disciplines will be presenting their research in 10-minute presentations at DSU from 8:15 a.m. to 4:30 p.m.

This free event will educate students on the eight dimensions of wellness through a series of activities including chair massages, blood pressure screenings and more. In addition, students can win free T-shirts and other prizes and pick up some free food. Healthy Days will be at Preston Center from 1:30 p.m. to 4:30 p.m.

Starry Tales for a Winter Night

Find yourself lost in the vastness of space from your own campus. Audience members will learn about the objects currently visible in the night sky during this presentation. The show begins at 7 p.m. at the Hardin Planetarium and is available every Tuesday and Thursday this month at the same time, as well as every Sunday at 2 p.m. Every show is free to the public.

Spend the last weekend of March outside watching our nation’s past time. The first 100 fans to Nick Denes Field for this game against Charlotte will receive an American flag t-shirt. First pitch is set for 1 p.m.

Head to the WKU Softball Complex to watch the Hilltoppers take on Florida Atlantic. Like all WKU sporting events, students can get in for free, but kids 12 and under can for this game, as well. The game will begin at 1 p.m.