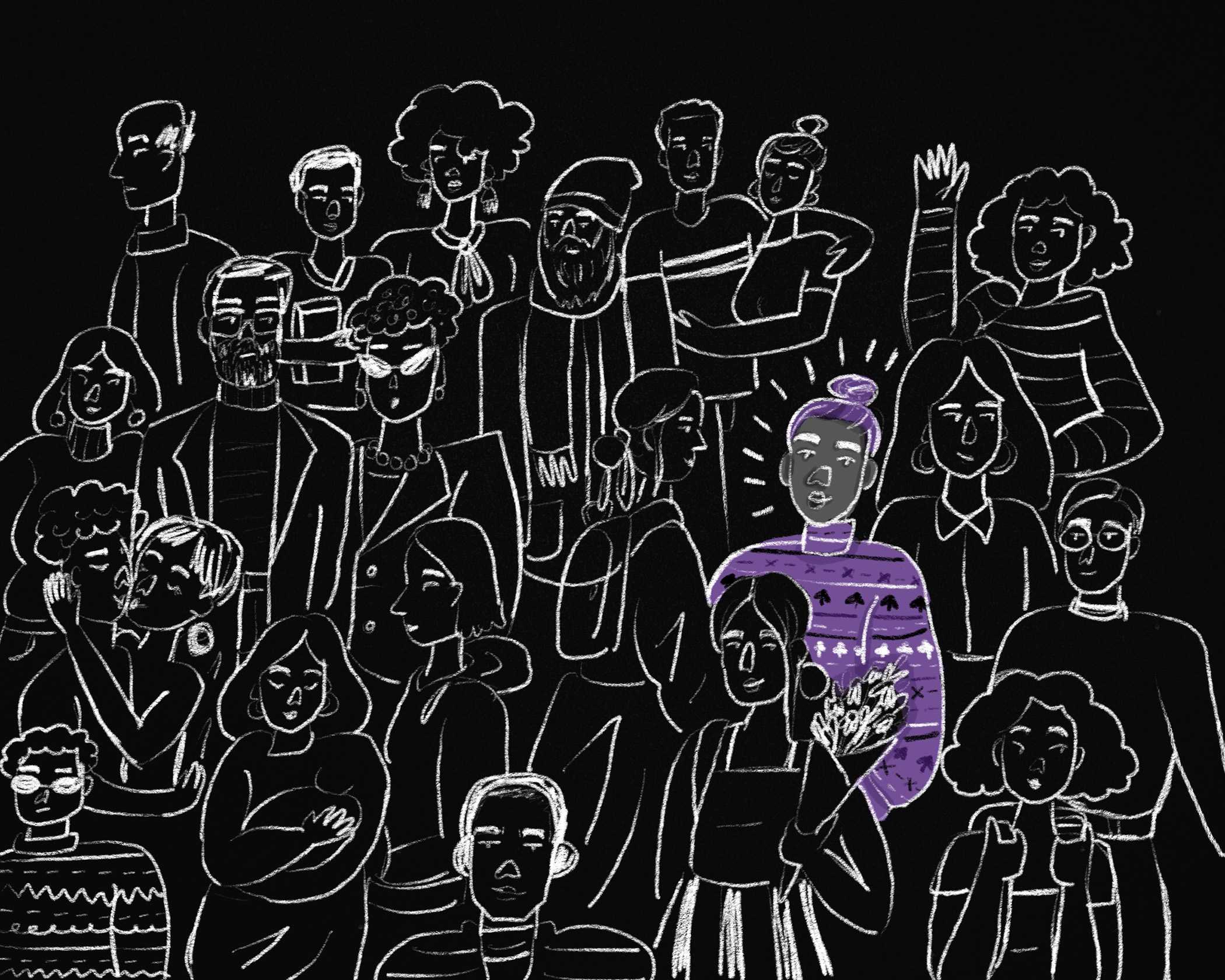 Malorie Byrne was in middle school when she first noticed that she didn’t experience attraction in the same way as her peers.

Her friends were starting to experiment with dating, but she realized for the first time that she was ambivalent.

“Oh, should I find these people attractive?” she remembers thinking. “Should I find boys attractive? Not that I think they’re unattractive. I’m just not like, ‘oh wow I need to be with that dude.’”

Curious, she started researching online. The word she found for herself was asexuality.

“That’s perfect,” she said, reflecting on the memory. “That’s exactly how I’m feeling.”

Now a Campbellsville sophomore, Bryne became more animated as she reflected on what she had learned.

“Ever since I’ve known I was asexual, I just really loved it,” Bryne said. “It’s one of those things where it’s nice to know there’s a community of people who feel the same way.”

The definition of an asexual given by the Asexual Visibility and Education Network is a person who does not experience sexual attraction or an intrinsic desire to have sexual relationships. Though AVEN was founded in 2001, asexuality is not new. Concepts of asexuality in humans were studied by biologists, sexologists and psychologists as early as the 1940s, though the identity wasn’t named until much longer.

“Historically, there have probably been a lot of asexual people in marriages who have gone along with sex because it’s expected,” said Marilyn Gardner, an associate professor of public health at WKU. The textbook Gardner uses for her human sexuality courses briefly mentions asexuality, though in a list of other identities rather than a topic all its own. Gardner said this is a reflection of the literature not being caught up with current thinking. She also noted that there’s still a lack of empirical research on asexuality.

Communities of asexuals bloomed in the early 2000s with the advent of the internet age as individuals found one another through online forums. Today, an estimated 1 percent of people identify as asexual, according to AVEN, though real estimates are hard to determine. As of 2017, asexuals are protected from employment discrimination by law in New York. For at least a decade, asexual characters have been appearing on TV, from New Zealand soap operas to “Game of Thrones.” Slowly, asexuality is bubbling up to the mainstream.

Still, Gardner said there are a lot of misconceptions about asexuality, one of which is that asexuality is a medical problem to be fixed.

“A person can have a full sex life by themselves, and that’s enough sexually,” Gardner said.

Byrne said a lot of her friends have questioned why she’s dated in the past if she’s asexual. She struggles to explain that though she isn’t emotionally connected to or fulfilled by sex, she’s ambivalent to it.

“I’m not sex-repulsed or anything, but I’m not actively seeking out anything sexual,” Byrne said. “I also really like hugging and cuddling. I’ve never minded kissing, but it’s one of those things where if we’re kissing that’s great, but if we’re not kissing, that’s also great. It’s more of being with that person regardless of what we’re doing.”

“They may have romantic feelings, but again that’s different,” Gardner said. “You can be asexual, but very romantic. And I think people confuse those.”

Louisville junior John Hasner came out to his girlfriend as asexual last summer, six or seven months into their relationship. Hasner and his girlfriend, Autumn Wall, are both resident assistants in WKU dorms, and the two met at a recreational volleyball game with fellow housing staffers.

Previously, Hasner identified as demisexual, a term for people between sexual and asexual who only experience sexual attraction after forming a deep connection.

“Very rarely do I experience sexual attraction for another person,” Hasner said. “I have to be very, very, very connected with somebody to even think about something like that. Other than that, I just go throughout my day, and (sex is) not even a thought in mind.”

But the label didn’t feel right. He spent his sophomore year feeling trapped inside himself as he tried to find the right term to describe his identity. The first time he heard the word “asexual” was in a resident assistant training about sexual orientations, but it was glossed over in a list of other identities. He didn’t consider the label for himself until a fellow residence hall employee who was asexual told him about her identity.

“Ever since I’ve been able to embrace that part of myself, I’ve felt more confident in my day-to-day life,” Hasner said. “I feel happier, I feel all these other emotions that are completely opposite of what I was feeling last semester, trapped and anxious all the time.”

Many people who identify with asexuality do not embrace the identity fully. Meagan Jones, a Bowling Green junior, first questioned her sexuality as a senior in high school. Like Byrne, she came across the word in an article online.

“I didn’t realize I was any different than anybody else,” Jones said. “I had never realized that sex was something people wanted to have.”

She’d had sex education throughout her lifelong public education, but it was limited to STD symptoms and condom demonstrations. Her sophomore health class featured a video in which a girl had oral sex with a male classmate and the whole school got syphilis. She laughed recalling the memory. Mostly, though, she wasn’t aware of sex throughout her adolescence.

Once as a junior in high school, she was in the car with her brother and his friend. The three were sitting in the parking lot waiting for after school traffic to clear up when one of the boys made a joke about an orgasm.

“Isn’t that when the baby is coming out?” Jones asked.

Jones attributed her lack of knowledge to the fact that they were boys and she was a girl. But as she entered college, she came to realize she couldn’t escape the inevitable that she was different than her peers.

“I came to find out everyone else was losing their virginity sophomore year of high school, and I was over here not even knowing what an orgasm meant,” Jones said.

Now a junior, Jones is a soft-spoken mathematical economics major at WKU. She speaks deliberately and laughs when she talks about things that make her nervous. Talking about asexuality makes her a little nervous.

In the three years since learning about asexuality, she hasn’t come to embrace the term for herself. Her best friend was eager to help her explore her identity, but other acquaintances have told her asexuality is just a phase or that she hasn’t found the right person.

“It makes me doubt it too, and then I have to go back to where I started and sort everything out,” Jones said. “It feels like I’m walking along and someone’s picking me up and putting me back at the beginning again.”

Sometimes still, she can’t avoid the fact that intimacy means something different for her than many of the men she dates. When she explained that she didn’t want to have sex with one of her first college boyfriends, he was offended.

“It’s not you,” she said she told him. “It’s literally everyone.”

Mostly what holds her back from embracing the label is that she still wants to date people. She values partners with a good sense of humor, someone you can have long conversations with where you leave the conversation feeling fulfilled. She also likes hugs. She’s definitely a hugger, she said.

“I think that as of right now, I’m fine leaving it open and just being Meagan for a while until I figure it out,” Jones said. “Because I’m 20. I still have time.”

Asexuality is not, however, limited to young people.

Dani G. is a 37 year-old trans woman who identifies as demisexual. Dani asked that her last name be replaced with the initial “G” in this story as she undergoes her social, legal and medical transition. Dani is soft-spoken with a blonde ponytail and a short, peppered goatee. For most of her life existing as a man, Dani said she felt pressure to perform sexually in relationships, but it just felt like a chore.

“I guess I don’t have what you’d call normal interactions sexually or romantically – unless I’m completely into someone at the level where I trust them entirely and I don’t question anything,” she said. “ The biological functions necessary to make sex happen are relatively impossible for me.”

Dani said she heard about demisexuality about a year ago while browsing an online forum.

“Oh these are my people,” Dani said she thought. “This is my home. This is who I am. It was a good feeling.”

It was around this same time that Dani came to embrace her transgender identity. She ended a five-year relationship and quit the software engineering job she’d held for 10 years. In her words, she walked away from one life to rediscover herself in a new one.

Though Dani began her transition recently, she’s always been trans. When she was 13, her sister painted her nails for the first time. She felt an intense feeling of satisfaction, a recognition that performing femininity in this way was right for her. In her teens, she immersed herself in the black-painted nails and eyeliner of gothic subcultures. In those groups, boys could express themselves with makeup and clothing in ways that weren’t accepted elsewhere.

“It’s been a slow, gradual process right up until one day I was like ‘I’m done fooling around,’” Dani said. “I got on meds and started going all out with it.”

Recently, she told her mom. The two sat down for dinner at El Mazatlan and Dani told her mom she was a woman.

Dani said she “waited for the other shoe to drop,” but it never did. Her mom accepted her as she was.

Though Dani said her gender identity and sexual identity are unrelated, she said embracing them both at the same time made sense to her.

“I’m more eager to embrace demisexuallity as an identity partly because this other lifelong nagging sense of dysphoria, of being trapped in the wrong body … has prompted me to think more broadly about who I am,” Dani said.

Six months ago, Dani met another trans, demisexual person at a political organizing event. That person is now her partner. Dani, whose partner uses they/them pronouns, said she was struck by their passion for political work, how they cared about the state of the world and wanted to fix it.

“After that, it was just everything — like a landslide,” Dani said. Her hands clasped around her coffee and she smiled.

Looking to the future, Dani said everything about her transition scares her: from finding and keeping employment to connecting with a larger community.

“There tends to be huge age gap,” Dani said. “There aren’t many trans people my age I’m able to connect with.”

But what she’s most looking forward to is the thing she’s waited 37 years for.

“Being me,” she said with a smile. “More than anything.”

The Department of Health and Human Services has been leading an effort to legally define gender based on biological genitalia at birth, according to memo obtained by the New York Times in October. Gardner said erasing non-binary gender identities and sexualities like transgenderism and asexuality is a public health issue.

“There may be unique needs of different communities, and we can’t meet them or address them and have conversations with them if we don’t know,” Gardner said. “There are a lot of people who don’t disclose identity in medical situations because of the stigma.”

Gardner says that conversations about these identities need to take place.

“Nobody needs to feel like there’s something wrong with them, and nobody needs to be treated as though they need to be fixed,” Gardner said.